TOKYO -- Japan's listed companies have hired around 1,000 additional outside directors in the past year, but having more board members, even theoretically independent ones, will not clean up business overnight.

The huge accounting fraud at electronics maker Toshiba underscores the scale of the task.

Appointing outside directors has more or less become a requirement under the corporate governance cord that took effect in June. But Toshiba has long had outsiders on its board and was seen as a trailblazer in that regard. The fact that the accounting scandal, involving misstated earnings of around 150 billion yen ($1.2 billion), took place at all has been a rude awaking.

In a report some 300 pages long, an independent panel set up to look into the book-cooking at Toshiba said the company needs to "increase the number of outside directors and review the composition of its board by considering the types of specialties required" to prevent similar incidents from happening again.

Toshiba separated its business operations and supervision in 2003. Of the 16 directors on the board when the scandal came to light, four were outsiders. All met the criteria for independent outside directors prescribed by the Tokyo Stock Exchange. 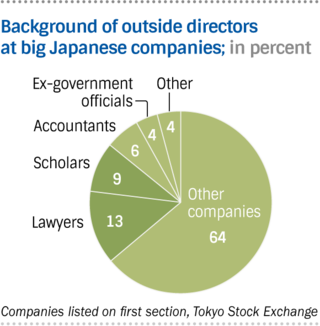 But two were former Foreign Ministry bureaucrats and one was an academic; only one of the outside directors had actual management experience. Critics said Toshiba's outside directors were mere window dressing. The company has no good answer to these complaints, since the board was unable to prevent or put a halt to massive, systemic accounting fraud. "We did not expect the number to increase so much," said TSE Director Masaki Shizuka. Foreign investors used to criticize Japanese corporate management for not having enough outside directors. This made companies insular and inefficient, leading to lower profit margins, the theory went. Perceptions are changing, however, as number of outside directors rises, according to Basil Dan, head of Japanese equity sales at Credit Suisse Securities (Japan). The problems at Toshiba could undercut this more positive view.

The TSE's Shizuka said outside directors need "to give opinions to the management as someone representing shareholders' interests." From that standpoint, lawyers and former government officials do not seem ideal: Many are predisposed to side with the company and its management.

"I must question if the outside director system can perform its main functions if the positions are all filled just by lawyers and accountants," said Shigeru Matsumoto, managing director of the Japan Association of Corporate Directors. That view is shared by Takeyuki Ishida, executive director at Institutional Shareholder Services, an international proxy voting advisory specialist.

"Former managers who are versed in the actual workings of businesses would be desirable," Ishida said. "There must be many suitable candidates, such as former top executives at listed companies."

The second issue is outside directors' independence. The new corporate governance cord calls for outside directors who are not from the parent company or financial institutions that have business dealings with it. This would seem like common sense in the U.S. and Europe, but less than half of Japanese companies listed on the TSE first section have two or more "highly independent" outside directors, a criterion the stock exchange wants them to meet.

At Fuji Oil, for example, five out of 13 directors are outsiders, but none qualify as independent under the guidelines because they come from business partners or major shareholders.

"Many companies should clarify the responsibilities of their boards before they start worrying about beefing up the number of outside directors," said Hiroki Sanpei, head of research at FIL Investments (Japan).

Some observers are inclined to cut Japanese companies a little slack as they try to implement the new system. "It took at least 10 years for U.S. and European companies to get enough highly independent outside directors," Matsumoto said. "In the 1980s, when they sharply boosted the number of outside directors, many of the posts were filled by top executives' acquaintances."

A lot of Japanese companies are still feeling their way around the outside director system. Hopefully, they will start thinking hard about how best to use the system to help keep them on the straight and narrow and boost their corporate value.