SHANGHAI -- It is a Tuesday night, yet World of Beer on Shanghai's Fumin Road is packed with a mixed crowd of expatriates and locals. The bar is stocked with craft beers from around the world, and manager Jacques Zhu is busy making recommendations -- he has 41 different beers on tap, and around 300 in bottles. Meanwhile, a Filipino band belts out classic rock songs.

World of Beer, based in Tampa, Florida, has 75 locations around the U.S., but the Shanghai branch is its first international franchise. Dezan Shira & Associates, a business intelligence company, estimates that the craft market makes up only 1% of China's total beer market, compared with 20% in the U.S., but still represents $400 million in annual sales.

The attractiveness of the Chinese market to global beer giants was illustrated in March by the takeover of Shanghai's Boxing Cat Brewery by Belgium's Anheuser-Busch InBev, the world's biggest brewer, which earlier in the year bought Kaiba, a Shanghai-based bar chain selling Belgian beer. However, while China is the world's largest market for beer by volume, accounting for a quarter of the total, Deutsche Bank estimates that it accounts for only 3% of brewers' profits. Sales volumes in China have been decreasing since 2014, but brewers are increasingly looking to move away from mass-market bottled beers, which sell for as little as 3 yuan ($ 0.44), toward premium products.

"I think the consumer trend in China is shifting from mass industrial beers to more refined craft beers. More and more consumers realize there is more to beer than their familiar bland lagers, such as Snow, Tsingtao, Budweiser, etc.," said Cong Yin, World of Beer's Shanghai franchisee.

Industry experts and customers seem to agree. "A few years ago, there were only about 30 craft brewers in China; there are now over 100," said Zhou Jingsheng from the popular industry website imbeer.com. Around 40 came together last year to form the Craft Brewers Association of China.

Sigrid Liu, a graphic designer in Shanghai, said she was no longer satisfied by mass market beers. "I tried craft beer and not only does it taste better but there is more variety of taste. I've started drinking Chinese craft beer because I like trying new beers," said Liu.

However, small brewers face a series of problems that make it difficult for them to compete. Unless they are producing beer for sale on their own premises, brewers are restricted to industrial zones far from city centers. To bottle beer, brewers need a stamp of quality approval, but this is only available for production lines capable of bottling more than 12,000 bottles an hour -- more than a month's production for many craft brewers.

In addition, beer in bottles needs to be filtered and pasteurized, which is anathema to many craft brewers. "If this remains the case, entrepreneurship in the local Chinese craft brewing industry will be stifled, leading to global players like AB InBev bulldozing the market and removing any local character from it," said Harry Handley, an industry analyst at Dezan Shira. 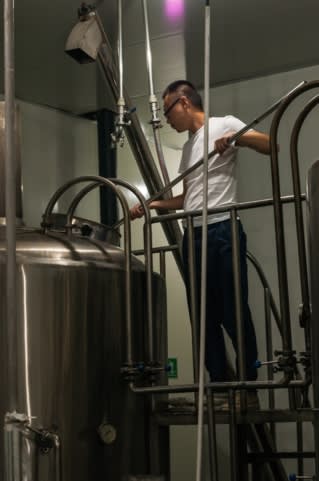 Chengdu Harvest Brewery was the first small brewer in China to get a keg license. (Photo by Mark Andrews)

One way around this problem was pioneered in 2015 by Harvest Brewery, in Chengdu, which became the first craft producer to get a keg license. This allows smaller breweries to put their beer in metal barrels -- often not much bigger than bottles - which can be sold at locations other than their own premises.

Chinese regulations allow much greater control of beer distribution and retailing by brewers than is permitted in the U.S. and many other Western countries, prompting AB InBev to target both production and the retail side of the craft market. A mini keg of the Bamboo IPA beer brewed in a collaboration between Chengdu Harvest Brewery and New Zealand’s Epic. (Photo by Mark Andrews)

The Belgian brewer is pushing sales of beers made by Goose Island, a Chicago-based craft brewery it bought in 2011, and in February established Goose Island's fourth international brewhouse in Shanghai. At the same time, it is looking for successful businesses already operating in the local craft beer market, such as Boxing Cat and Kaiba.

"If the Chinese market takes off as it did in the U.S. and Europe, we can expect to see acquisitions from other global brewers too," said Handley, pointing to Beijing-based Jing A, Slow Boat and Great Leap, along with Shanghai Brewery, as potential takeover targets.

Gao Yan, owner and founder of Nanjing's Master Gao Brewery, said all craft breweries are potential targets, but those established by Mainland Chinese owners are less likely to be for sale.

The craft beer market in China was for many years largely the preserve of foreigners --- both brewers and drinkers. Boxing Cat, for example, has an American brew master, and was established in 2008 by two overseas Chinese and another American. 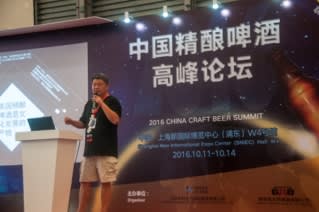 However, Gao said the funds coming into the industry are likely to push it in an "evil direction," noting that, "unfortunately, most truly local breweries are not well established." It is possible that many new breweries will pop up in order to be sold to foreigners, "not for being independent and creative," he said.

Tsingtao, China's flagship mass-market beer brewer, is regarded as a likely purchaser of craft breweries as it seeks to revitalize its sluggish sales performance. The brewery has already introduced an upmarket German-inspired brew called Augerta, which retails for about 10 yuan a can, but has failed to gain much of a foothold in the premium market.

Asahi Breweries of Japan is looking to divest a 20% stake in Tsingtao, but its Japanese rival Kirin is likely poised to move into the Chinese craft beer sector through Lion, a Sydney-based Australian subsidiary, Handley said.

"Lion have recently set up a craft brewery in Hong Kong and a pop-up bar in Shanghai, along with e-commerce distribution partnerships with Alibaba, (a Chinese e-commerce platform)" he said. With craft beers typically selling in Shanghai and Beijing for more than $4.50 a bottle, the sector offers an opportunity for brewers to increase their Chinese profits.