NEW YORK -- 2013 went out with a bang for fans and creators of Asian pop culture, and the reverberations are being felt on both sides of the Pacific. 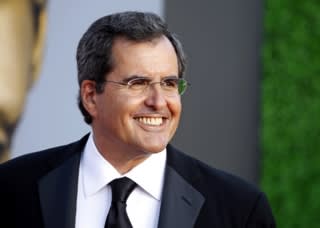 Peter Chernin, founder of Chernin Entertainment, is pictured here at a media event in Los Angeles in July 2011.

With an investment estimated at just under $100 million, Chernin Group placed a meaty bet on what its president, Jesse Jacobs, calls "the future of television."

"The global demographic of Asian pop culture fans is young, early tech adopters who are super-passionate consumers of media," said Jacobs. "We’re huge fans of what (Crunchyroll is) doing."

Chernin Group seems keen to diversify the content, such as offering Chinese or Indian entertainment, for example. However, Crunchyroll co-founder and CEO Kun Gao insists that the central mission is to "bring the best of Japan to the world."

That is music to the ears of industry professionals in both the U.S. and Japan. Marc Perez, CEO of the California-based Society for the Promotion of Japanese Animation, said, "Chernin’s recent investment in Crunchyroll brings fresh attention to the industry, and everyone from content creators to distributors to anime conventions and consumers will benefit."

Peter Chernin is the former president and Chief Operating Officer of Rupert Murdoch’s News Corp. For 13 years he oversaw the rapid global expansion of Fox Television and the blockbuster successes of movie studio Twentieth Century Fox, with international megahits like "Titanic" and "Avatar."

Chernin resigned to pursue the world of startups in 2009 -- the very same year Crunchyroll transformed itself from piracy to legitimacy by legally licensing anime content.

Chernin Group has made a name for itself by investing in high-octane startups like Tumblr, Pandora and Flipboard. Last spring, it tried, unsuccessfully, to acquire U.S. streaming TV site Hulu.

"The Crunchyroll founders and senior management team have accomplished two incredible things," Chernin said in a Dec. 2 statement announcing the deal. “One, they have built one of the leading online video companies in the industry. And two, they have created the best and largest community for anime video in the world.

"We couldn't be more excited about the future,” he added. “Our plan is to continue to grow the anime vertical as well as launch new channels in different genres. Online video is growing faster than any other sector in media, and we feel that with Crunchyroll, we have a fantastic anchor platform."

That platform was hard to build. Almost exactly five years ago, on New Year’s Day, Crunchyroll transformed itself from the most popular site for free anime downloads to a portal for legally licensed content -- literally overnight. Many felt the odds were insurmountable: Why would anyone pay for content that was free the night before?

At the time, Vu Nguyen, the site’s co-founder and vice president of business development and strategy, said: "The fans genuinely want to support creators and the industry. They just haven’t been educated on how the industry works. We’re doing our best to inform them."

Crunchyroll shrewdly opened an office in Tokyo and began negotiating with Japanese studios and television networks. A partnership with TV Tokyo, still the site’s core ally and now joined by Chernin Group, opened the floodgates to licenses for mass-appeal anime titles like "One Piece," “Naruto,” and the latest global hit, “Attack on Titan.”

A key element of Crunchyroll’s success has been community. It has created a space on the Internet where like-minded fans of Asian pop culture can communicate, exchange information and feel like they belong. The site features message boards, special deals and communal forums and chats that bring its users together in a common pursuit. While megasites like Netflix and Hulu feature some anime content, they are comparatively aimless vessels next to Crunchyroll’s sharply focused armada.

"Our thesis has been that we think that we can build a superior service if we super-serve our audience," said Crunchyroll’s Gao. "Start from content and deliver 100% of what they want, nothing more or less. Add to that community, e-commerce, extensions of the shows they’re watching, and then manga."

"We’re trying to build this over-the-top experience over this (very specific) content, and we’re able to do a better job than anyone else. Our hypothesis is that there are customers who love this so much they’re willing to subscribe. And that’s been proven true."

Three years into its current incarnation, Crunchyroll began accruing profit -- a solid track record for a startup -- and the licensing became easier in Japan as domestic anime producers started to trust the online model.

Chernin Group’s Jacobs agrees that the community-focused approach is a cornerstone of the site’s appeal and potential.

"We spent time doing our due diligence," he said. "We went into the message boards and the forums, and they’re just amazing. You’ve got people posting profiles of themselves -- male, female, young and old. And they’re all super passionate. That’s what we like. Crunchyroll hadn’t spent a dime on marketing, and they’ve got this many subscribers and this much attention.”

Low overhead has been another hallmark of Crunchyroll’s unlikely success. The fledgling startup raised $5.5 million in 2007-2008 to prepare for its transition to legitimacy. It never looked back, keeping expenses to a minimum to serve a hungry and willing fanbase.

"We’re very nuts and bolts kind of guys," said Gao. "We try to be really frugal so we can pass on any savings to our users. We want only what we need to get the job done. Our partnerships in Japan are not something money can buy. You have to build trust and slowly build upwards. We’ve always asked ourselves if we could do more if we had more capital, and the answer was always no.”

Jacobs is happy with what the company has done: “These guys deserve a ton of credit," he said. "We look at a lot of early stage growth equity VC-backed startups, and these guys did an amazing thing. They raised money seven years ago and never did it again, which is unheard of in the world of startups. They built a business. There’s real value to the culture and brand they built."

Now, of course, the pressure is on for Crunchyroll to deliver a wider array of content to their global audience. Plans are well underway to expand the service globally. The site already hosts a mix of South Korean and Japanese live-action dramas alongside its anime and manga mainstays.

Yuji Nunokawa, founder of Studio Pierrot (“Naruto,” “Bleach”) and president of the Association of Japanese Animations, is hopeful about the future.

Roland Kelts writes for The New Yorker, Time, CNN, Newsweek Japan and other publications, and is a frequent contributor to NPR and the BBC. He is the author of "Japanamerica: How Japanese Pop Culture has Invaded the U.S.," and a visiting scholar at Tokyo's Keio University.