The exhibition will also feature presentations and discussions led by investors, entrepreneurs and others in the startup world.

The event -- a rare opportunity to see, hear and feel the future -- will showcase a number of innovations, including nongaming uses of virtual reality. 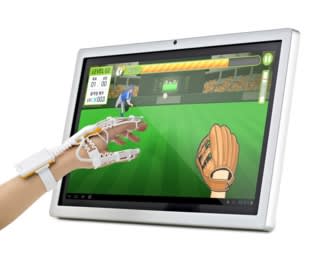 Tokyo-based Dverse has developed a 3-D design aid for engineering and construction work. Tentatively dubbed VRDesigner, it allows users to replicate CAD (computer-aided design)-generated instruments in virtual reality. A user can, for example, "manually" create a landscape with a hand tool -- a bit like a giant creating a miniature garden -- and then walk through it as a dwarf.

South Korea's Neofect has taken VR technology into the medical field. Its sensor-lined Smart Glove allows people who have lost full use of their hands to engage in virtual hand activities. The aim is to facilitate rehabilitation exercises through games.

Wearables are also evolving. Inupathy is the name of a Tokyo startup and of a "mind reading" device for dogs. Put it on your pet, and it will use lights and colors to let you know how excited, relaxed, or happy he or she is. It actually reads a dog's heartbeat, not its mind. Telepathy Japan's Telepathy Jumper is a small Borg-like unit that sits right in front of one of the wearer's eyes. The device includes a high-resolution optical display, camera, microphone, sensors and a central processing unit. It is attached to a flexible neck strap, on the other end of which is a power unit and removable controller.

The LX-I, developed by South Korea's Looxid Labs, is a head-mounted wearable device that allows for hands-free operation of other devices. It works by detecting brain waves as well as eye and head movements. The LX-I can be used for playing games, though only those controlled by eye movement, or to allow disabled people to have conversations via hands-free typing. It also tells the user, based on his or her brain waves, how tired or focused they are. The Ozon by 16Lab of Kanagawa Prefecture, just south of Tokyo, is a ring-like device that allows users to control apps by moving their fingers.

Many friendly robots will be on show. Bocco, developed by Tokyo-based Yukai Engineering, is a message-reading robot. Linked to a smartphone, the robot reads messages to children staying at home.

AKA, an American company, will introduce Musio, an artificial intelligence robot that can help children study English. The Tiny1 comes from Singapore. It is a small, hypersensitive camera by TinyMOS that can take photographs in low-light conditions. It can even capture starry skies. CtrlWorks, also from Singapore, will introduce a contraption that turns anything on wheels into a robot.