People offer prayers at the start of the new business year at Kanda Myojin Shrine in Tokyo.   © Reuters

TOKYO -- Even in a Japan that has clung to cash for 80% of payments, innovations like electronic money are making headway, changing both consumer habits and work patterns.

A restaurant in Tokyo's Chuo Ward opened in November as an experiment of sorts takes only e-money and credit cards. Customer traffic has been less than brisk, but that is not the point.

Your money's no good here

"The aim is to reform how we work," says Akito Nonomura, managing director of restaurant group Royal Holdings, which is overseeing the project.

"Closing out," the task of checking whether the money in the cash register matches the day's receipts, can take nearly 40 minutes because any miscount sends the process back to square one. Eliminating cash as a payment option shortens this to just a few minutes, freeing up workers to do other tasks. Customers are told in advance about the no-cash rule, and so far there have been no problems when the bill arrives, according to Nonomura. 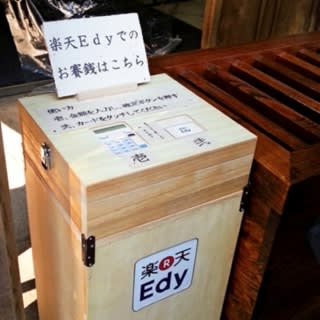 A terminal that lets visitors pay with Edy e-money stands next to an old-fashioned collection box at Tokyo's Atago Shrine.

Other places are also going cashless. No more need to toss a coin in the collection box before saying a prayer at the Ohtori Shrine. The Tokyo landmark began accepting credit cards in lieu of cash in November after many visitors asked whether they could use them. And the Atago Shrine, known for its long stone stairway in the capital's Minato Ward, will take donations in e-commerce group Rakuten's Edy e-money for one day on Jan. 4, when many Tokyoites come to pray for good luck at the start of a new year. The Edy terminal has been clad in the wooden box for the occasion. "It lets visitors give the amount they want even when they're not carrying change," says Masataka Yoshida of Rakuten Card.

International visitors to Japan often report surprise at how many establishments do not take plastic. Such local financial institutions as Seibu Shinkin Bank are looking to change this in partnership with Coiney, a Tokyo-based startup that provides card-processing terminals to restaurants, booth vendors and other small businesses.

Keeping all of Japan's cash in circulation requires some 8 trillion yen ($71.2 billion), according to Mizuho Bank, part of Mizuho Financial Group. The human and mechanical infrastructure needed to transport and otherwise manage bank notes and coins imposes a huge cost burden that the shift to cashless payments could ease.

But saving money is not the only benefit of changing how people use it. CEO Nobuyuki Hirano of Mitsubishi UFJ Financial Group, the nation's biggest banking group, sees the potential for insights into the consumer mind. "Financial activities unable to be captured with cash payments can be turned into data that leads to new services," Hirano says.

Alipay, the payments arm of Chinese e-commerce giant Alibaba Group Holding, crunches data on users to yield such new business leads as potential borrowers typical financial institutions had ignored. As more Japanese consumers break the cash habit, mining the data they leave behind is likely to catch on.