When its Chang'e-3 probe touched down on the lunar surface in December, China entered history as only the third country to complete a successful soft landing on the moon. That feat, together with the previous launch of a manned space mission, establishes China as one of the world leaders in space exploration, along with India which launched an unmanned Mars probe the previous month. 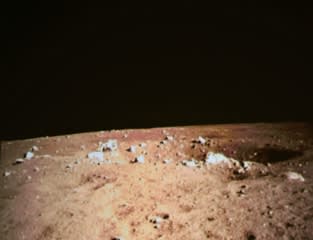 This Dec. 14, 2013, photo shows the moon's surface taken by the onboard camera of the Chinese lunar probe Chang'e-3.   © Xinhua/AP

The Chang'e-3 has an exploratory rover that can travel at speeds of 200 meters per hour. The rover's mission calls for three months of surface exploration, image-gathering and a radar-assisted geological survey up to 100 meters deep.

The lunar soil is reportedly rich in helium-3, a likely future fuel for nuclear fusion generators, as well as other useful resources, including titanium. China seems to be using the Chang'e-3 to strengthen its position in anticipation of serious international competition for lunar resources.

The Japan Aerospace Exploration Agency (JAXA) succeeded in exploring the moon with its Kaguya lunar orbiter, as did India with its Chandrayaan. But only the U.S., with its manned Apollo program, and the former Soviet Union, with unmanned vehicles, have previously succeeded with lunar landings. "The amount of data obtainable using physically present vehicles is far greater," said a source at Japan's government.

But Japan and the U.S. are wary of the possibility of China applying its space technology to military purposes. Several media organizations in China have quoted a Chinese specialist as saying, "Chang'e-3's cutting-edge guidance technology can be applied to missile development."

Adding, perhaps, to the sense of unease, China began operating its BeiDou Navigation Satellite System, similar to the Global Positioning System of the U.S., over the Asia-Pacific region at the end of 2012, providing an alternative to the American satellite navigation system.

The Chang'e-3 landing comes more than 40 years after the U.S. Apollo missions to the moon.

In the intervening decades, the U.S., Russia and Europe have played significant roles in space exploration. But China, which has been putting effort into lunar exploration and manned space travel for some time, is now quickly catching up. In June 2013, it launched the manned Shenzhou-10 and successfully docked it with the unmanned Tiangong-1 experimental vehicle, marking China's second successful manned docking. China has been accumulating technology for its own space station, which it aims to begin operating in 2020. Observers say any research papers by Chinese scientists on the Chang'e project should be closely watched to assess the current level of China's space science.

Additionally, a survey by the U.S. Federal Aviation Administration shows China was second only to Russia in the number of spacecraft launches in 2012. Russia conducted 24, followed by 19 for China, 13 for the U.S. and 10 for Europe. Adding Japan and India, which each made two launches, there are now six nations and regions in the arena of international competition.

India is coming to the fore too. It is rapidly gaining on Japan, having launched a probe set to enter Mars' orbit in September 2014 and to observe the atmosphere of the red planet. India could become the first country in Asia to succeed in this objective, after the failure of Japan's Nozomi Mars orbiter in 1998.

In its 12th five-year plan, which runs through March 2017, the Indian government announced a space program that includes more than 50 satellite launches.

Like China, India will soon become a competitor for Japan in the launch business. In September, JAXA succeeded with the first launch of its new Epsilon vehicle, designed to meet the increasing demand for launches of smaller satellites. The second generation of the vehicle will offer significantly lower launch costs of about 3.8 billion yen ($36.3 million), falling to about 3 billion yen in later generations. The Indian PSLV rocket, however, touts its lower cost of about 2.5 billion yen.