TOKYO -- Cold fusion is back. Truth is, the idea of triggering nuclear reactions at relatively low temperatures never really died. Scientists have continued to investigate the theory, though many opt for other names, such as "low-energy nuclear reactions." 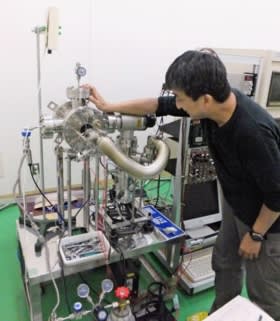 A Tohoku University researcher conducts an experiment in an effort to trigger nuclear transmutation and generate heat.

In Japan, cold fusion research is now the basis of a project at Tohoku University, in the northeastern city of Sendai. The goal is to develop a small, simple device for turning radioactive waste into safer substances and generating heat.

In a process called nuclear transmutation, one chemical element changes into another with a different number of protons in the nucleus. This phenomenon could be used to detoxify nuclear waste that would otherwise remain radioactive for hundreds of thousands of years. The catch: Scientists believe actually doing this would require massive equipment.

Yet cold fusion research suggests it might be possible to achieve transmutation with a much smaller system. Professor Jirota Kasagi, a nuclear physicist, and his colleagues at Tohoku University hope to do just that.

A new lab, the Condensed Matter Nuclear Reaction Division, opened in April at Tohoku University's Research Center for Electron Photon Science. The unit is a joint effort with Tokyo-based research company Clean Planet. Kasagi is leading efforts there to extract useful heat energy by transmuting hydrogen into helium, and long-term radioactive materials into harmless ones.

A matter of atoms

All matter on Earth is made up of atoms, which consist of a nucleus surrounded by electrons. The nucleus itself is formed by protons and neutrons. Hydrogen is different from iron, which in turn is different from helium, because the atoms of every chemical element have a different number of protons in the nucleus.

A nucleus is an extremely stable thing. Very powerful forces are required to change its form. That can be done by slamming it with fast-moving neutrons, causing the nucleus to break apart. This type of nuclear transmutation is known as fission. It is what makes nuclear power plants work: When an atom's nucleus is split into two or more other kinds of matter, it releases energy as heat, and that heat is used to generate electricity.

Another kind of nuclear transmutation is fusion, where two or more atomic nuclei are fused together.

Deuterium is a nonradioactive isotope of hydrogen that contains a proton and a neutron in the nucleus. In Kasagi's experimental setup, metal nanoparticles are injected into pressurized deuterium gas. The team expects deuterium atoms to fuse together on the surface or inside these metal nanoparticles, forming stable atoms of helium and releasing heat.

Yasuhiro Iwamura, formerly of Mitsubishi Heavy Industries, joined the team at Tohoku University in April. With his arrival, the scope of the research expanded to other nuclear transformations: converting radioactive palladium, which emits beta rays for hundreds of thousands of years, into radiation-free tin; changing radioactive selenium into stable strontium; turning radioactive zirconium into ruthenium; and switching radioactive cesium into praseodymium, which is also radioactive but has an extremely short half-life of 13.6 days.

Palladium, selenium, zirconium and cesium are among the byproducts from nuclear reactors. They are considered particularly difficult to process. Dealing with them through nuclear transmutation is a central theme of ImPACT, a Japanese government program that supports innovation that would benefit industry and society.

Tohoku University and Mitsubishi Heavy belong to a group of more than 10 ImPACT participants looking into the feasibility of nuclear transmutation technologies. The main focus of this research is transforming radioactive materials by changing the number of neutrons in the nucleus. This would be done by bombarding the materials with high-speed neutrons, requiring huge accelerator machines. But Kasagi and his colleagues hope to realize simpler transmutation through reactions between radioactive materials and deuterium gas or hydrogen gas.

Back in 1989, a pair of British and American scientists announced that in tests, hydrogen atoms appeared to fuse together under low-temperature conditions. This triggered a wave of interest in cold fusion. Yet the excitement fizzled after the duo's findings were discredited due to flaws in their experiments.

Nevertheless, some scientists have pressed on. Kasagi explained his motivation: "Since we have data that defies the conventional wisdom of nuclear science, I think I need to try and understand the mechanism."