TOKYO -- In 2010, Rosen Diankov, a Bulgaria-born American, moved to Tokyo from the U.S. to pursue his lifelong dream of launching an industrial robot venture in one of the most robot-friendly countries in the world. He sees growing demand for his technology due to a shrinking workforce amid Japan's declining birthrate and the aging of its society. 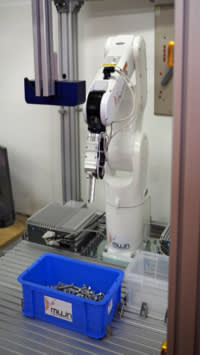 The Mujin controller, the silver box on the far left, is connected to an industrial robot arm.

With a Ph.D. in Robotics from Carnegie Mellon University under his belt, Diankov and his partner formed an industrial robot startup, called Mujin, in 2011. He has a big goal in mind: He aims to grow his robot business and help revitalize Japan through his innovative technology.