Forensic science is reaching new heights with the latest technologies 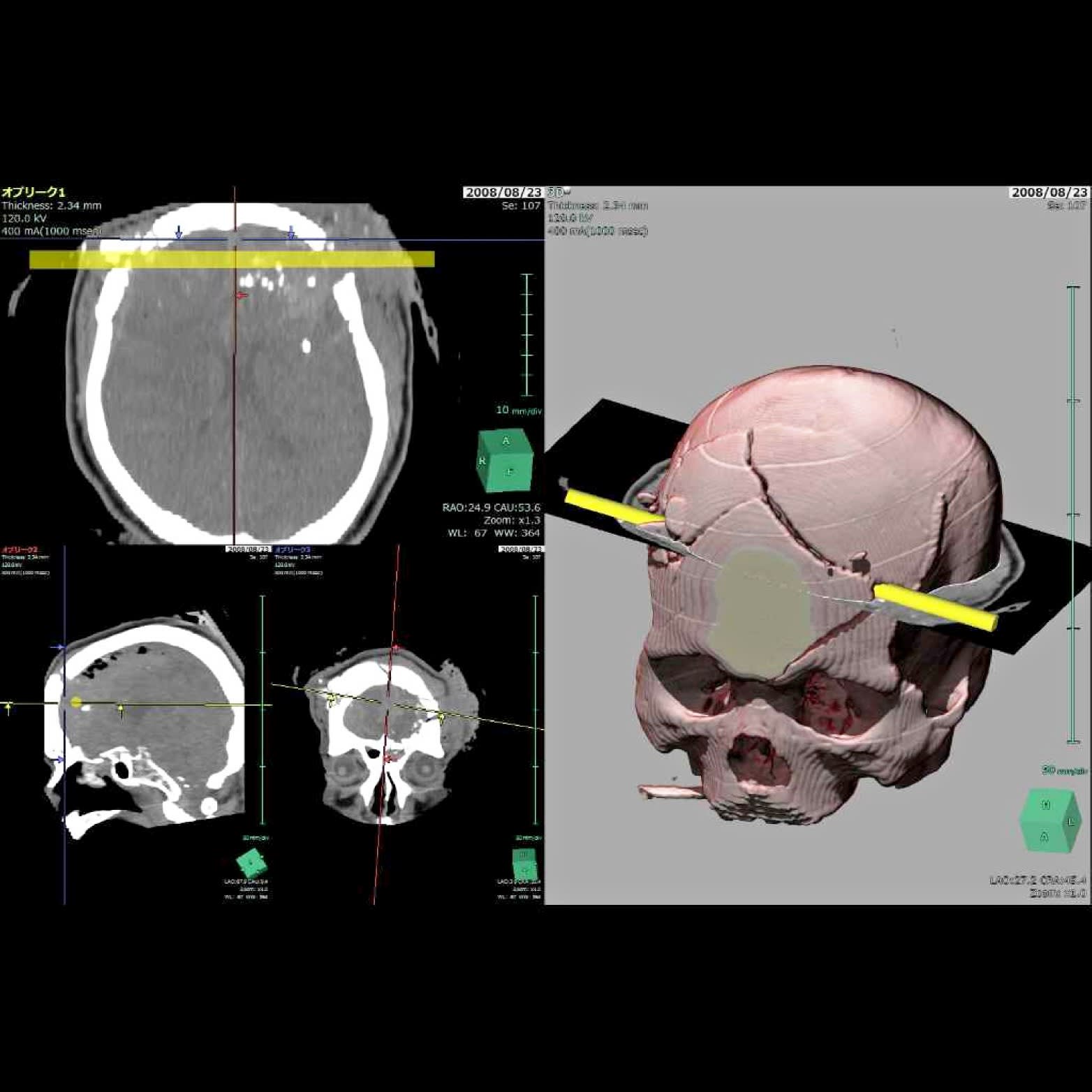 Fujifilm Medical's system can render a 3-D image like this one, which shows where a bullet passed through a victim's head.
ATSUSHI SATO and BENKEI KURODA, Nikkei staff writersNovember 3, 2016 12:00 JST | Japan
CopyCopied

TOKYO The police in Japan are placing greater emphasis on forensic science and the kinds of physical evidence it can yield. Private companies are aiding that effort by developing devices and technologies that are taking the field to previously unheard-of levels of precision.

One example is a mass spectrometer developed by Shimadzu that can analyze trace materials in amounts of as little as a quadrillionth of a gram.

Another is a technology developed by Fujifilm Medical that can quickly render 3-D images of a victim's body, and possibly the manner in which he or she died.

Tools like these can help police be more effective at solving crimes and apprehending culprits.

VAPORIZING EVIDENCE Shimadzu's latest triple quadrupole gas chromatograph mass spectrometer can be used to identify even trace components in the material remains collected at the scene of a crime.

The operator just passes all the sand, dust, hair, skin oil and other detritus collected at the scene through the machine, and their components can be teased out, down to the level of a quadrillionth of a gram.

That is five to eight times more sensitive than conventional equipment of its type. The Shimadzu manager in charge of the project had good reason to boast that it is the most sensitive system in the world.

With that level of sensitivity, the forensics team has a much better chance of determining the origin of a weapon and the unique characteristics of its user.

The latest version of Shimadzu's system incorporates a newly designed, highly sensitive ion detector, together with technologies that mitigate the noise that can interfere with ion detection.

Pricing the machine starting at 25 million yen ($237,000), Shimadzu is promoting it not only to police departments, but also to companies in the chemical, food and pharmaceutical industries. The global market for mass spectrometers currently supports annual sales of some 6,000 systems. Shimadzu's share of this market is 20%, and it believes it can boost that over the next five years to 30%.

Another promising application of this super-sensitive system is the investigation of drug toxicity.

Working with Nagoya University Hospital, Shimadzu has constructed a database of the 68 compounds commonly involved in accidental poisonings in Japan. Recently there was a spate of patient deaths at Oguchi Hospital in Yokohama, and it was determined that they were caused by disinfectant that had been injected into their intravenous drips, suggesting that the deaths were not accidents at all, but were in fact homicides. By analyzing the components of the disinfectant, police could be able to identify the manufacturer, which would give them a new lead in the case.

With advanced technologies like the system from Shimadzu, forensic science can reach a higher level of precision.

SMOKING GUNS, ETC. There is a trend now in Japan to emphasize investigations based on physical evidence. In its fiscal 2016 budget, the National Police Agency earmarked 11.3 billion yen, 4% more than last year, for infrastructure for the investigation of objective evidence such as fine-grained materials and DNA. Anticipating growing demand for equipment and technologies that can support forensic science, private companies are stepping up their R&D efforts to drive progress in the field.

Fukuoka University professor Shinichi Kubo has constructed a database of 104 components of dangerous but legal drugs and is teaming up with private enterprises to develop practical ways to use the information.

Police departments are collaborating with companies to develop and introduce systems for real-time transmission of sights and sounds from crime scenes to the incident room, a facility used by the police while working on a major crime.

Autopsies are one tried and true way of determining cause of death and collect evidence that can help identify the killer. The coroners who perform these procedures are considered medical witnesses.

But whereas the police in Japan investigate some 200,000 deaths a year, there are only around 150 expert medical witnesses nationwide. The Criminal Investigation Bureau of the National Police Agency is working to add as many coroners as possible and have them attend crime scenes. But with the increasing number of deaths as the population ages, there are worries that autopsies will not always be conducted and crimes will be missed.

The system quickly converts hundreds of CT scans of a dead body into a single 3-D image. Previously this process could take as long as several days, since it involved manually marking each of some 500 to 1,000 CT images prior to conversion. But Fujifilm Medical has a proprietary algorithm that can complete the task in seconds.

Automatically selecting specific organs and bones, the system generates an image that can be viewed from a variety of angles. It also facilitates access to information important to the investigation, for example by highlighting bullet and stab wounds.

This can both reduce the time needed for autopsies and help the prosecutor explain the crime to a jury.

Fujifilm Medical has priced the system starting at 6 million yen and is promoting it to government agencies, hospitals and police. Its goal is an installed base of 300 systems next fiscal year, with sales both inside and outside of Japan, including in the U.S. to the FBI.

HEAVY LIFTING The workload on forensic scientists is also being lightened by systems from Nikon and Hamamatsu Photonics that digitize images of cells seen under a microscope. "It helps for collaborations with other universities and to share data at meetings," explained professor Hirotaro Iwase, director of the Chiba University Education and Research Center of Legal Medicine.

DNA profiling is also playing a growing role in forensics, and U.S. companies are at the forefront in the development of forensics genomics systems.

The base-sequencing systems now widely in use by police only work to extract and amplify specific stretches of DNA for analysis. They require experienced technicians and less accurate in DNA profiling when samples, for example, contain a mixture of different individuals' blood or come from degraded tissue.

This is less of a problem with the new forensics genomics system from U.S. company Illumina. Its device can conduct simultaneous analysis of multiple patterns of base sequences, providing the kind of evidence that can keep innocent people out of jail.

Thermo Fisher Scientific is another U.S. company at the forefront of equipment for DNA profiling. Its system analyzes the structure of the bases themselves, increasing the likelihood of successfully profiling DNA even from the kinds of mixed samples that are extremely difficult to analyze.