Convoys controlled by one driver will be more efficient, but will cost jobs

SYDNEY -- At some point in the next decade, driverless trucks in Australia will make the jump from mine sites to main roads. When that happens, transport experts predict big gains for road safety and freight economics, but disruption for some of the nation's 190,000 truck drivers.

For other road users, driverless trucks will usher in the era of "platooning" -- what used to be called convoys -- and the prospect of driving down a highway alongside four trucks nose-to-tail, with just the barest of gaps between them.

Platooning offers the potential for big fuel savings through reduced drag, with a lead truck and driver controlling the movements of the driverless vehicles tucked in behind. Without the need for the three-second gap that covers a driver's reaction time, these trucks sit just a few meters apart at a constant speed, presenting a streamlined profile that can mean fuel savings of up to 15%.

Small-scale platooning is already in use in Europe, where truck makers such as Scania, DAF, Iveco, MAN, Volvo and Daimler are working with technology companies and research centers to bring autonomous trucks and vehicle-to-vehicle communication to commercial reality as quickly as regulations allow.

Similar work is underway in North America (through ride-sharing company Uber's subsidiary Otto), and in Asia, where Japanese makers Hino and Isuzu and China's FAW Jiefang are developing driverless trucks. Volvo is testing an autonomous truck in an underground mine in Sweden. Elsewhere, they are being used in other controlled environments such as the port of Rotterdam -- and soon, in Singapore -- and there are various tests of driverless buses underway around the world, including in Australia. 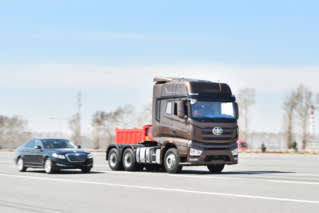 The general consensus is that the next 10 years will determine how quickly fully automated trucks become prevalent. McKinsey & Company said in a study last September that a third of all new premium trucks in the West would have Level 4 automation -- meaning self-driving on highways -- in 2025.

In March this year, Otto co-founder Lior Ron told a technology conference in San Francisco that the U.S. would see broad deployment of driverless trucks within the next 10 years. Navigant Research reported in April that it expected the adoption of fully automated trucks would begin "in the next decade."

A report on driverless trucks released by the Paris-based International Transport Forum on May 31 said automation would reduce freight costs, cut exhaust emissions and make roads safer, but the impact on driver jobs globally would need a "managed transition." It said driverless trucks could reduce the demand for drivers by 50-70% in the U.S. and Europe by 2030, with up to 4.4 million trucking jobs becoming redundant.

Australia is a relatively small truck market, but its driving conditions and long distances between its major population centers make it ideal for testing autonomous truck technology, according to Rita Excell, executive director of the Australia and New Zealand Driverless Vehicle Initiative, an industry cooperative body.

Excell said that truck platooning and high levels of automation could revolutionize the Australian road freight sector, which transports 2 billion metric tons of goods a year over 17 billion km.

The technology would bring greater safety, efficiency and productivity, and provided a realistic solution to employment challenges in the industry, given that Australia's freight task was predicted to increase by 26% over the next decade, she noted.

She said it was hard to attract and retain skilled drivers in Australia, particularly for long-haul trips, but this new technology would make the task safer and more comfortable for drivers.

"While there absolutely remains a place for a heavy vehicle driver, there is little doubt their role will change over time in response to automated technologies," Excell added. Drivers might still have to resume control in heavily congested and complex areas in city centers, for example.

ADVI's research showed there were high levels of concern in the community about legal and financial responsibility for completely self driving vehicles should something go wrong, she continued.

"Perhaps the biggest hurdle that currently exists is winning the hearts and minds of the public," Excell said, noting that with driverless vehicles coming "within the next five to 10 years," it was critical to work on community acceptance. 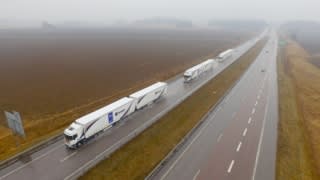 Australia already is home to the world's biggest fleet of driverless trucks -- 71 Komatsu dump trucks that mining giant Rio Tinto uses at three of its iron ore mines in the Pilbara region of Western Australia.

These monster off-road trucks are unlike any highway trucks. They stand as tall as a three-story building and can carry 290 metric tons of ore, for an all-up weight of 500 metric tons. On-board computers start, stop and steer the trucks as they move around the mine sites in response to GPS directions, remotely monitored by Rio Tinto workers sitting in a control center in Perth, 1,500km away.

According to Rio Tinto, the autonomous trucks are about 13-14% cheaper to run than if they had drivers. Along with a lower wages bill, the savings come in multiple ways -- less wear and tear on the equipment, greater operating capacity and efficiency, and fewer safety concerns.

In a review of the autonomous trucks' performance late last year, Rio Tinto said they could run "almost 24 hours a day, 365 days a year, stopping only for refuelling and maintenance." Rio Tinto said that since the first driverless trucks were introduced in 2008, the autonomous fleet had "outperformed the manned fleet by an average of 14%, and reduced load and haul operating costs by up to 13%."

While the size of the Komatsu dump trucks is much greater than highway trucks, the same efficiency principles apply.

International Transport Forum secretary-general Jose Viegas said in the forum's May 31 report that driverless trucks could be "a regular presence" on many roads within the next 10 years. Preparing now for the potential "negative social impact" from job losses would ease the risks if there was a rapid transition to automation, he said.

The road freight business generates 4% of Australia's gross domestic product, and is worth more than $70 billion Australian dollars ($53 billion) a year. But road safety is a costly issue, with the Bureau of Infrastructure, Transport and Regional Economics reporting recently that 181 heavy truck accidents claimed 205 lives in the year to March 2017. The National Transport Commission puts the economic cost of heavy vehicle accidents at about $4 billion Australian dollars a year.

Major roads such as the Hume Highway linking Australia's two biggest cities, Sydney and Melbourne, may be the first to see driverless trucks in a commercial highway setting. ADVI's Excell said automation technology was developing so rapidly that it did not necessarily have to rely on "connectivity with the road network."

Longer term, as GPS technology, truck-to-truck links, cameras and other sensors become more accurate, driverless trucks could make their way into even the remotest parts of the Australian Outback.

These inland roads already have their fair share of challenges -- dust, heat, kangaroos or other animals bounding into a vehicle's path, the fear of getting lost or breaking down. For a car driver, perhaps the scariest hazard of all is overtaking a road train travelling at its 100kph speed limit.

A road train pulling three trailers loaded with livestock, fuel or 100 metric tons of mineral ore can be more than 50 meters long and kicks up a lot of dust on an unsealed road. Getting past it safely is a test of driving skill that must take into account speed, visibility, other traffic and road conditions. A future road train "platoon" in the Outback would pose an even bigger test -- but by then, it may not be a human driver taking responsibility, just a machine talking to another machine.