OSAKA -- Japanese artificial intelligence program DeepZenGo faced off with three human go masters from Japan, China and South Korea in its debut of an international match in the World Go Championship that ended on March 23. Despite finishing third, having beaten only Japan's Yuta Iyama, the program exhibited strength in the early stages of every match. 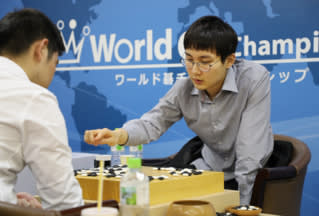 The players faced off in a round robin at the Japanese go organization Nihon Ki-in's Osaka headquarters on March 21-23, with the cooperation of Nikkei Inc. South Korea's Park Jeong-hwan came out the winner, prevailing in all three matches.

"The toughest game was against the AI," Park said after winning the championship. Even though Park won, the AI program, known as Zen for short, in its second match took advantage of Park's early loose moves and maintained a lead most of the way. Many, including Park himself, thought it was only a matter of time before Zen would win. "It came to a situation where I could have resigned."

Mi Yuting, the Chinese master who beat Zen on the first day of the event, said, "Soon after the game started, I was on the defensive."

Zen's moves in the early to middle stages of matches have reached levels that may exceed human masters. Even though few of its moves contained surprises to human observers -- with most of them looking even mediocre -- they were good enough to build up an advantage, showing signs of Zen's ability to see the big picture.

So, why then did Zen lose?

The program showed weaknesses in the closing stage of matches and repeatedly made crucial missteps against skilled defensive moves by the humans. "I cannot pin down the cause [of the mistakes]," said Hideki Kato, Zen's chief developer. But, analyzing the match against Park, Kato said the program "seemed to have other things to worry about" in its effort to improve the broader perspective instead of concentrating on the immediate match.

Having seen Zen's losses on the previous days, Iyama, who squared off against the program on the last day, could have adopted a strategy to take advantage of Zen's weakness toward the end. But Zen deftly coped with Iyama's offensive moves and defended its early lead to a comfortable win. "I wanted to test my skills without thinking much about [my opponent being] AI," Iyama said. "I think my moves were correct and well thought out ... But chances did not come my way until the very end."

On Zen's overall performance, developer Kato said, "It was more than we expected. Zen put up a very good fight."

The DeepZenGo project was launched on March 1 last year to further strengthen go computer program Zen by bringing together experts from various fields, including artificial intelligence.