The device is placed near an artificial vent through which hydrothermal fluid travels. (Courtesy of Jamstec)

TOKYO -- An experiment is underway deep under the East China Sea near Japan's Okinawa islands in which scientists are helping sulfide chimneys to grow so that they can collect rich mineral deposits from them.

Here's the big lure -- there's gold, copper and other metals in these deposits.

Researchers expect to leverage volcanic activity beneath the seabed and come up with a new method to "mine" these metals that will be less taxing on the environment than conventional mining. The deposits they are collecting have only a small amount of harmful substances and will need little refining.

In February, a team of researchers and engineers rigged up some equipment on the seafloor. The goal is to extract valuable mineral resources from one of these sulfide chimneys.

The team comes from a consortium made up of of the Japan Agency for Marine-Earth Science and Technology as well as the University of Tokyo and other renowned schools. This test device is meant to cultivate mineral deposits deep under the sea. (Courtesy of Jamstec)

The idea to cultivate undersea mineral deposits came while researchers were studying deep-sea creatures that live and cluster around these chimneys. The researchers had drilled vents through which they could draw super-hot hydrothermal fluids and develop the chimneys. During this project, team members discovered that the chimneys could grow to seven meters high over a year. This quick growth "was a fresh surprise," Jamstec researcher Tatsuo Nozaki said.

Scientists recently found methane hydrate and rare earth metals under the sea near Japan. The methane could serve as an alternative to conventional fossil fuels.

Japan has high expectations to one day mine a cornucopia of maritime resources; these chimneys and artificial vents might pave the road to such a future.

The deep-sea chimneys carry minerals similar to a particular type of high-grade black ore found in the mountains of Akita Prefecture, northwestern Japan. The seabed deposits contain copper, gold and silver. And the quality is equal to or even higher than the kuroko ore found in Akita.

The equipment now on the floor of the ocean near the Okinawa islands has a sensor to measure temperature, pressure, the amount of hydrothermal fluid, the weight of mineral ore and the percentages of metals in the high-temperature fluid.

About 40 tons of ore can be extracted annually from a natural undersea chimney. This is far below the daily 1,000 tons or so that today's commercial mines produce. To make cultivation profitable, a number of artificial vents will be needed to effectively draw out the mineral-rich hydrothermal fluid.

The intense pressure deep under the sea increases hydrothermal fluid temperatures, allowing minerals to liquefy. The Iheya North Knoll, the Okinawa Trough, where the test device now toils, is about 1,000 meters deep, where mineral fluids reach temperatures of about 310 degrees C. An analysis shows the fluid contains a large amount of zinc, some copper and lead, and even a hint of gold and silver.

These fluids are not unlike those that provide Japan's many onsen hot spring resorts with their soothing water. But by the time onsen water reaches the surface, its temperature has fallen to around 100 degrees and it has lost the valuable metals it carried at the beginning of its journey as they solidified along the way.

Different metals can be extracted depending on the fluid's temperature. For example, under seabeds deeper than the Iheya North Knoll, where chimney fluids reach 400 degrees, the fluid carries more copper. It has become difficult to find high-grade copper anywhere in the world, so cultivating the metal from undersea chimneys and vents could prove to be an economically sound endeavor. 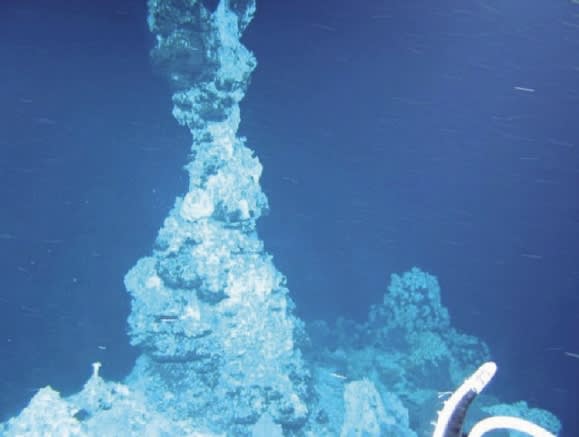 Undersea chimneys are rich in valuable metals. (Courtesy of Jamstec)

Meanwhile, a 200-degree fluid is ideal for gold and silver. The hydrothermal fluid near Okinawa belongs to the same type of volcano as the Hishikari gold mine, in Kagoshima Prefecture, southwestern Japan, known for generating high-grade gold.

Jamstec's Nozaki said the team hopes to be able to obtain large amounts of different metals during the Okinawa project by controlling the fluid temperature with bulbs.

The mechanism to separate metals from deep-sea fluid is similar to the principle with which mineral ores are developed underground: Metals contained in an extremely hot fluid can be removed as the fluid cools while climbing to the surface. Nozaki is keen to discover secrets of how mineral deposits develop, then use the findings to mount further explorations.

A Papua New Guinea project has been seeking to commercialize deep-sea mining. But it is hazardous work. Precautions have to be taken to keep from contaminating surrounding waters. And how to dispose of arsenic and other harmful byproducts from the refining process is a problem.

The researchers involved in the project near Okinawa plan to pull out their equipment in December, then examine the mineral ores and data that the equipment has collected.

As concerns grow over the environmental costs involved in traditional mining, cultivating mineral deposits from hydrothermal fluid could be a solution.