TOKYO -- Kawasaki Heavy Industries is working to create a supply chain for liquefied hydrogen, a fuel it sees as a major new energy source. The key to its success lies in developing a network of allies that can demonstrate the viability of the "hydrogen economy."

The Japanese company is joining forces with Electric Power Development, known as J-Power, to produce hydrogen. The technology to transport the liquefied fuel will come through an alliance with energy company Iwatani. It has also begun a "smart community" project with Obayashi, a construction company, aimed at generating electricity from hydrogen and supplying it to the community.

Kawasaki Heavy has many of the technologies needed to handle hydrogen, from production to supply, but creating a comprehensive hydrogen infrastructure by itself would be impossible, so the company is expanding its partnerships. 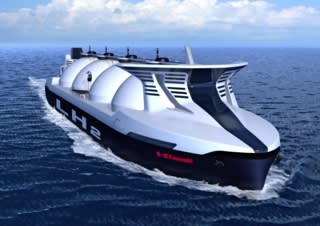 Kawasaki Heavy hopes to become a leader in setting standards for the transport of hydrogen, which will rely heavily on tankers like the one in this artist's rendering.

In the mines of the Latrobe Valley, in southeastern Australia, brown coal is piled high as far as the eye can see. Kawasaki Heavy is testing technology here to produce hydrogen from the coal. As early as 2017, it will begin construction on a pilot plant that can produce 20 tons of hydrogen a day.

Brown coal, or lignite, is relatively heavy for the amount of energy it contains. That is because it is 50-60% water. It is also prone to spontaneous combustion when dried, making it difficult to transport. As a result, it is rarely used as a fuel and is therefore cheap.

That does not mean it has no value. Kawasaki Heavy believes if it can scale up production of hydrogen from the lignite to produce enough to power 3 million fuel cell cars, its unit-production costs will be cut in half.

"The hydrogen produced here will be free of carbon dioxide emissions in the future," said Nishimura. Kawasaki Heavy took an interest in the Latrobe Valley not only because it has rich lignite reserves but because the Australian federal government and the state government of Victoria are moving ahead with plans to transport and store the waste CO2 from hydrogen production in a tapped-out undersea gas field.

Hydrogen burns cleanly, producing only water vapor. But for hydrogen to become an important source of energy, a way must be found to curb the CO2 emissions. Kawasaki Heavy believes it can be done.

The company has already built a plant that liquefies hydrogen at minus 253 C and it is working on a tanker that can transport the fuel in liquid form. With support from the New Energy and Industrial Technology Development Organization, a Japanese state-funded body known as NEDO, Kawasaki Heavy will combine these technologies with those from the lignite hydrogen plant. The goal is to demonstrate the feasibility of transporting liquefied hydrogen on a large scale.

J-Power will play a key role in producing the hydrogen. Kawasaki Heavy will develop the equipment to transport the liquefied hydrogen, together with Iwatani, to and from tanker ships.

Meanwhile, Kawasaki Heavy is teaming up with Obayashi to examine the challenges of commercialization. The two will build a power plant equipped with a hydrogen-fueled gas turbine with a capacity of about 1,000kW. The plant will supply electricity and heat to the community. Kawasaki Heavy will thus be involved in demonstrating the viability of each link in the supply chain, from production and transport of hydrogen to its use as a power source.

The heavy equipment maker's primary focus is on hydrogen production and the tanker businesses rather than managing the supply chain. "We ourselves will not become the operator," said President Shigeru Murayama.

Kawasaki Heavy's hydrogen project began in 2009. Senior managers at the time were looking for ways to make money in a "low-carbon society" and hit upon hydrogen. The company was already supplying tanks to store liquefied hydrogen, used as rocket fuel, in Tanegashima, Kagoshima Prefecture. It also had the gas turbine technology needed to generate electricity from the fuel.

Employees were beavering away in their separate specialties until management told them to take a look at the bigger picture. By familiarizing themselves with the upstream and downstream parts of the supply chain, they are better able to develop the patents and specifications needed, for example.

In taking on this ambitious project, Kawasaki Heavy is chastened by its experience in the shipbuilding business. The company has been paying licensing fees to European manufacturers for the diesel engines used in tankers for more than a century, and for the liquefied natural gas tanks used in LNG tankers for more than three decades. It lagged behind in those areas. And while Kawasaki Heavy has almost all the technologies used in heat insulation materials, it continues to pay the basic licensing fees in that area as well.

Kawasaki Heavy wants to be a leader in setting international standards for the liquefied hydrogen supply chain. "This is a once-in-a-lifetime opportunity," said Nishimura. The company is cooperating with government agencies to devise rules for hydrogen transport by sea, hydrogen power generation and the safety of port facilities that receive hydrogen. Through the NEDO project, it aims to set standards by creating a pilot supply chain ahead of Germany and the U.S.

Kawasaki Heavy has already taken steps in maritime transport, such as providing information to the International Maritime Organization, which sets international standards for marine transport. For Kawasaki Heavy, which had to adapt to international rules for oil and LNG, "a tanker to transport liquefied hydrogen will be a game changer," said Nishimura.

Japan's Ministry of Land, Infrastructure, Transport and Tourism has agreed on a pact with its counterpart in Australia on liquefied hydrogen tankers. It will gain experience through operations scheduled to begin in 2020, and will call on the IMO to set the appropriate standards.