TOKYO -- As incomes rise and food-safety concerns swell, the idea of factory-produced vegetables is appealing to more Southeast Asians. 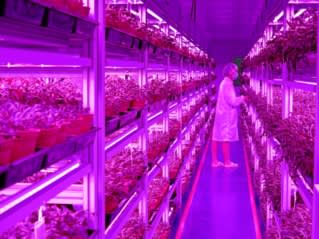 Panasonic's vegetable factory in Singapore is looking to boost its output more than tenfold in two to three years.

Singapore leads the regional trend. Factory farms that use strict quality and environmental controls present an attractive alternative to a city that is heavily reliant on veggie imports.

A familiar brand is involved in the farms, but one known more for its electronics than for vitamin C, folate and iron. Still, there it is, the name "Panasonic," right there on the label of a package of mixed greens that Singaporeans see when shopping for ready-to-eat salads.

Panasonic began selling the salads in the tiny country in November. In Singapore, imports from around the world dominate most produce aisles.

Priced at 6.9 Singaporean dollars ($4.84), the salads -- lettuce, mizuna and red pepper slices in plastic containers -- are roughly twice as expensive as comparable packaged greens imported from Malaysia. Shoppers seem undeterred. After some stores began running out of the Panasonic-grown nutrients, other retailers wanted to begin stocking the salads, too. Now 26 locations sell the greens. 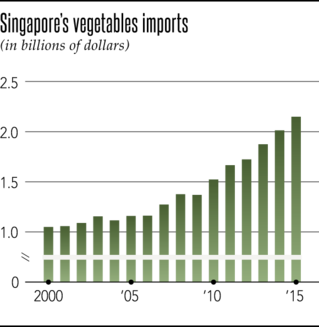 The vegetables are hydroponically grown inside a factory in an industrial park in the western part of Singapore. The facility, refurbished by Panasonic Factory Solutions, a factory automation equipment maker, began operating in 2014. Inside the farm, rows of vegetables in pots grow under purple LED lighting. They are harvested after around 30 days -- roughly half the time a traditional farm would need to produce the food.

Panasonic in May spent about 300 million yen ($2.51 million) to raise the plant's production capacity from 3 tons a year to 81 tons. The company plans to boost the capacity much further, to 1,000 tons, or 5% of Singapore's entire annual vegetable harvest, in two to three years.

Hydroponic farming's "strength is that it can supply vegetables in a stable manner, since it is not affected by weather conditions," said Hideki Baba, managing director of Panasonic Factory Solutions Asia Pacific. Hydroponic farming "technology has been progressing rapidly, too."

Factory-raised vegetables are selling well in Singapore because people there are increasingly paying attention to food safety. What is more, the nation's agricultural sector can meet only 10% of domestic vegetable demand, and the city's vegetable imports have roughly doubled over the past decade. As imports from China and elsewhere have increased, more consumers are feeling anxiety about pesticide residue and other food-safety issues.

For some of these people, it is worth paying a premium for vegetables that have been raised under strict quality controls.

Other Japanese companies have also set up vegetable factories in Singapore, hoping to leverage their cutting-edge technologies. 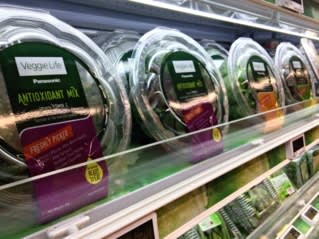 Panasonic-branded salads are now being sold at 26 stores in Singapore.

Kidaya, a supermarket operator based in Chiba Prefecture, in August tested the market and ended up selling 5,000 packages of factory-grown vegetables. The company, which has been growing vegetables in a factory in Fukui Prefecture, plans to begin production in Malaysia as soon as next year, with plans to export the produce to Singapore. It is looking to team up with Taikisha, a major Japanese air-conditioning equipment maker, and other parties in the endeavor.

Sumitomo Chemical, meanwhile, will work with the Agri-Food & Veterinary Authority of Singapore to gather data on how to optimize rooftop vegetable patches.

Singaporean companies are also entering the vegetable industry. Sky Greens is growing vegetables in factories the size of soccer fields. in the northwestern section of Singapore. Inside the factories, vegetables grow on 20 or more shelves in aluminum A-frames. The shelves are attached tierlike to a conveyor belt that slowly moves them up and down along the frame.

As a shelf moves to the higher section of each 9-meter-high frame, the vegetables receive sunshine from above. As the veggies move along the bottom of the frame, water and nutrients are supplied. This vertical system allows for fewer pesticides and energy to be used, according to the company. Every day, the plant ships 26,000 heads of lettuce and other vegetables to clients, one of which is Singapore's leading supermarket chain. Sky Greens' vertical farming system is designed to take advantage of the sun.

Factory farming has spread to other Southeast Asian countries as well.

In the Long Hau Industrial Park on the outskirts of Vietnam's Ho Chi Minh City, a Japanese autoparts maker established a vegetable factory by investing 300 million yen. The facility grows vegetables by reversing day and night, turning on the lights when the sun goes down to take advantage of low nighttime power rates and keeping the farm dark during the day. The operation is currently capable of harvesting 1,700 pesticide-free heads of lettuce and other vegetables a day. It has been shipping produce to luxury hotels and other clients since October.

Sky Greens is now working toward launching a vegetable factory on the southern Chinese island of Hainan.

"We should be able to recover our initial investment in four to five years because production costs are lower there than in Singapore," the company's CEO said.