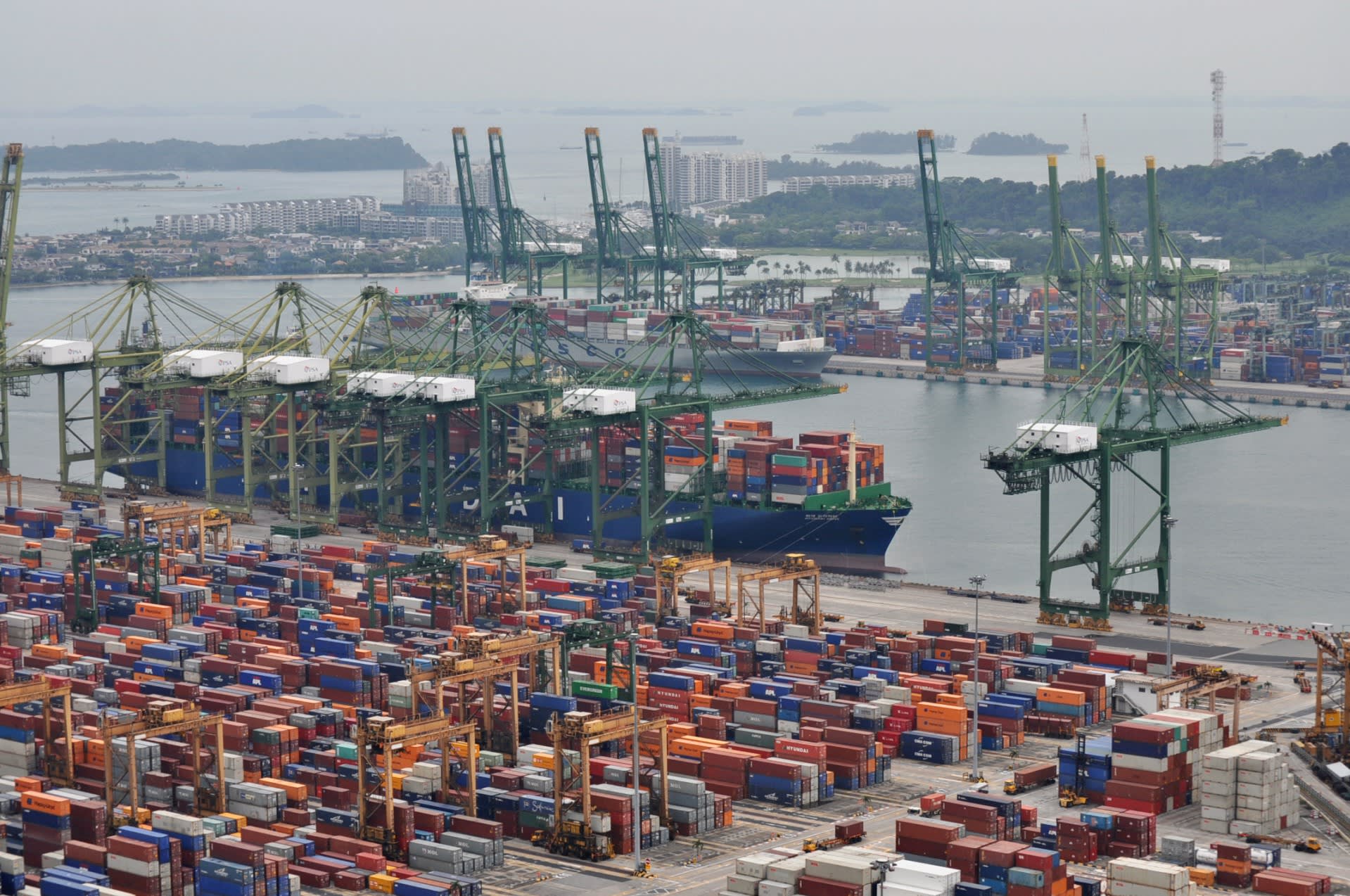 Tens of thousands of containers are processed at the Port of Singapore every day.
YUI NAKAMURA,NQN staff wrterDecember 24, 2015 17:20 JST | ASEAN
CopyCopied

SINGAPORE -- Neptune Orient Lines, Singapore's flag carrier shipping company, will be delisted as it will be acquired by a French rival amid toughening business environment. The fate of NOL reflects a downturn and new realities in the trading nation's shipping industry.

An expansion of business scale is necessary to overcome difficult conditions in the shipping industry, NOL CEO Ng Yat Chung said at a press conference on Dec. 7, announcing that the container shipping line will be acquired by shipping major CMA CGM.

NOL handles about 3% of global container volume, as do Japan's Nippon Yusen and Mitsui O.S.K.Lines, while CMA CGM is the world's third largest container shipping firm, with a market share of 9%.

While shareholders such as Singapore sovereign wealth fund Temasek Holdings, which owns a 67% stake in NOL, will sell all of their shareholdings to CMA CGM, the French firm will buy the remaining stake through a tender offer. CMA CGM is expected to spend 3.38 billion Singapore dollars ($2.40 billion) on the acquisition. The plan is for NOL to delist from the Singapore Exchange.

Taking advantage of its location at the tip of the Malay Peninsula, Singapore has grown as a hub of intermediary trade. NOL has played a key role in the nation's industrial development.

Lee Kuan Yew, Singapore's first prime minister, launched harbor improvement projects upon the birth of the country in 1965. The government then began promoting the shipping industry and founded NOL in 1968 as a national flag carrier.

Goh Chok Tong, who succeeded Lee as prime minister, was recruited by the government for his skillful management of NOL to take the helm of a trading country whose exports and imports combined top its gross domestic product by about 2.7 times.

NOL recently lost its luster as a government-affiliated blue chip company. Hammered by flagging global trade, NOL has stayed in the red since 2011. Although NOL has continued restructuring efforts such as the sale of its logistics business to Japan's Kintetsu World Express in May, it fell into the red in the first nine months of 2015 if profit from the sale is excluded.

The price of NOL stock clearly reflects the company's plight, with its shares currently quoted 80% lower than the record high set in 2007. The market capitalization of NOL is S$3.2 billion, equivalent to 275 billion yen ($2.25 billion), much less than Nippon Yusen's 500 billion yen and Mitsui O.S.K.'s 360 billion yen.

In 2012, NOL was removed from the Straits Times Index, the benchmark index for the Singapore stock market.

Temasek has good reasons to sell its stake in NOL.

Temasek means "sea town" in Malay. The company name suggests that the government fund is closely related to the sea.

The fund still has all shares in companies such as PSA International, one of the world's four largest port operators. It has been playing the role of developing the nation's industry by supporting PSA and other strategically important Singapore companies as a stable shareholder.

Recently, however, Temasek has become a more investment-oriented company seeking to boost returns.

Temasek now allots less than 30% of its capital to Singapore companies, down sharply from more than 50% in 2004, and has raised investment in Chinese companies to a comparable ratio. As a result, returns on investment are increasing.

NOL has become deadwood for Temasek, due to its negative return on investment of more than 12%.

The Singapore government, meanwhile, is pushing ahead with a large-scale port improvement project in the western part of the country with the aim of consolidating related facilities to create one of the most competitive ports in the world.

Singapore ranks second in the world in handling containers. But Shanghai, the busiest port in the world, and other ports in China are rapidly expanding their presence. There are also moves to shift port calls to Malaysia, Singapore's neighbor, which is planning to cut port call fees.

Singapore's handling of container volumes dropped 8% in the first 11 months of 2015 from a year earlier. The first contraction in six years in 2015 is increasingly likely because of noticeable falls in the second half.

Goh, when in office as prime minister, wrote that it was impossible to imagine Singapore without the Port of Singapore, whose success was the result of not only geographical advantages but also the endeavor and ingenuity of the Singaporeans.

The government is determined to keep accelerating port improvements on the grounds that Singapore can tolerate a decline in its market-based shipping industry but will never give up its position as a logistics hub having wide-ranging economic spillover effects. Temasek decided to sell NOL as an objective option for Singapore's future.

Temasek may have concluded that NOL will have a better chance of returning to profitability under CMA CGM than on its own, and this will contribute to Singapore's growth as a hub port in Asia, said OCBC Investment Research analyst Eugene Chua.