Photo caption: Indian movie "Tamasha," released in November 2015, was distributed in North America, Europe, the Middle East and Australia, taking in some $15.8 million and watched by over 7.5 million people.

TOKYO -- India is crazy about movies. Bollywood cranked out a world-beating 1,966 films in 2014, drawing 1.9 billion viewers, also the most. Indian films have a growing global fan base as well, thanks to such international hits as "English Vinglish" and "3 Idiots." And the money is big: Three of the world's 10 highest-paid actors are based there.

Hoping to cash in on Bollywood's ascent, other countries are scrambling to attract Indian film projects, aware that movie buffs may get the travel bug after catching a flick set in an exotic foreign location.

Increasingly, Indian blockbusters are shot abroad, said Indian actor and producer Dheiraj Kapoor. For example, PK was shot in Belgium, Kick was filmed in Poland and Happy New Year was filmed in Dubai. All were huge projects. Indian filmmakers tend to choose overseas locations, Kapoor explained, because ordinary Indians want fantasy and adventure, something as far-removed from their everyday realities as possible. Popular stars, adventure and action, singing and dancing, and a good script are prerequisites for a hit, he said.

The sound of money

One country getting a big boost from Bollywood is Switzerland, which has long been a favorite location for Indian filmmakers. In the last two decades, more than 200 Indian films have been shot there. The impact on tourism has been huge. The number of Indian visitors jumped from 71,000 in 1993 to 393,000 in 2010, an increase of over 400%. Moreover, Indian tourists come ready to spend, shelling out an average of $330 per person a day,compared to $192 for all tourists.

Spain, meanwhile, benefited from being the location for the 2011 film "Zindagi Na Milegi Dobara," which roughly translates as "you only live once." To win the project, the Spanish government offered to refund the 18% value-added tax related to the project, and subsidized joint ads worth $660,000 or more. The movie featured various Spanish cultural assets, including the La Tomatina tomato-throwing festival, the San Fermin running of the bulls, and flamenco dancing. The number of Indian visitors to the country jumped from 75,000 in 2010 to 115,000 in 2011.

Singapore also offered state aid to land an Indian film project. For the 2014 movie "Krrish," the government helped cover costs for local actors and actresses, staff, rental equipment, transportation and accommodation. The government also made it easier to receive permission to shoot in certain locations. After the film, the number of Indian tourists grew from 6 million to 7 million. 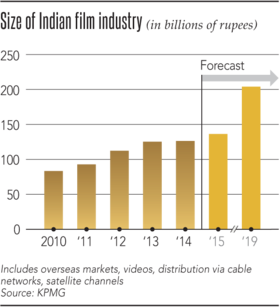 Other countries keen to host Indian film projects include South Korea, New Zealand, the U.S., the U.K., Ireland, Italy, the Czech Republic, Oman and South Africa. Japan, however, has been less responsive to Bollywood's charms. Still, the government has created a special administrative zone for hosting "content"-related projects, such as films and TV dramas. While that strategy has not yet yielded many results, some progress is being made.

One example is "Tamasha," a love story about an Indian couple who met in Corsica. The movie, shot for $9.6 million and released in 2015, featured Indian superstars Deepika Padukone and Ranbir Kapoor. The film is set mainly in Corsica and India, but the couple gets reunited in Tokyo later on in the movie. About 30 Indian crew members and some local staff from Japanese film production company Shochiku shot the scenes in major tourist spots in Tokyo, such as Akihabara, Shibuya, Shinjuku and Marunouchi.