Box offices boom as theaters crop up across the country 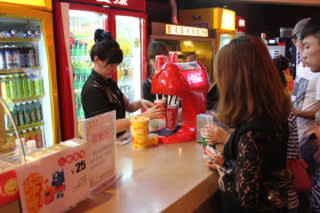 The growth of the Chinese box office is a boost for popcorn and soft-drink companies too.

China now occupies around 10% of the global movie market. It is still a distant second from the U.S., which accounts for 30%, but all signs point to a time not far from now -- 2018, perhaps -- when it will become No. 1. Some estimates even predict the Chinese market will be twice the size of that of the U.S. by 2025.

Much of the growth is in the nation's third- and fourth-tier cities. Panjin, a city in Liaoning Province famous for crude oil, rice and crabs, saw box-office revenue surge from 2.65 million yuan in 2011 to 25.6 million yuan in 2012, an 867% increase in just one year. According to EntGroup Consulting, a Beijing-based entertainment industry consultancy, more tickets are now sold in a month than were previously sold in a whole year.

Movies are a cheap form of entertainment. Typically, people might go to a shopping mall, look around the shops, have lunch and catch a movie. Dalian Wanda Group, which runs 90 Wanda Plaza shopping malls around the country, is the nation's largest theater operator, with 147 cinemas and 1,247 screens.

Although Chinese tourists are a growing presence around the globe, not everyone can afford to travel abroad. According to a recent study by Peking University's Institute of Social Science Survey, the top 1% of households in China hold a third of the country's total assets. On the other side of the coin, the bottom 25% of households hold only 1% of the wealth.

The survey categorized Chinese households into five categories: the "poor and weak" type who live in poverty, the "ants" type who work hard but have little money to spend, the "snails" type who are burdened by housing and education expenses, the "safe" type who live a decent life, and the "comfortable" type who enjoy ample wealth.

"The first three types constitute the majority of the Chinese people," the research report said. Those three types have barely any money to spend beyond daily expenses. For them, going to a movie for 30 yuan is one of the few luxuries they can afford.

It stands to reason that these viewers would prefer two hours of action-packed entertainment full of sound and color, something to make them forget the struggles of daily life, rather than a serious drama that might only bring them down. Box-office statistics support this idea. While "Transformers: Age of Extinction" raked in $320 million in China this summer, Nicole Kidman's "Grace of Monaco," a portrayal of former Hollywood star Grace Kelly's crisis over her marriage and identity that was released the same month, earned just over $4 million.

China has 142 cities with populations greater than 1 million. People in these cities account for the bulk of moviegoers in China, and their tastes will likely decide what kind of movies are produced in Hollywood, and around the world.