Business Insight: Why is Chinese ride service Didi sitting on so much cash?

Despite its lock on domestic market, the company's future is less than assured 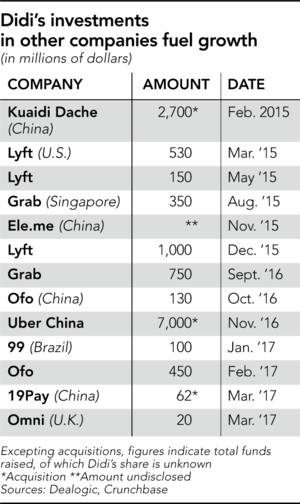 Something strange is happening at Didi Chuxing. The Chinese ride service raised $5.5 billion in April, adding to the more than $10 billion it raised last year. Assuming it is no longer burning through $1 billion a year as it did during its fight for Chinese market share with Uber, Didi now has an enormous cash balance for a startup, perhaps as much as $13 billion.

Since when do startups raise, and then sit on, this much cash? Especially since Didi is now a near-monopoly in China, having conquered its two largest rivals. Following Didi's takeover of Uber's and Kuaidi Dache's local operations, Beijing's CNIT-Research recently put the company's market share at 94%.

So why is Didi raising all this money? In the press, the commonly cited motivations for Didi's latest fundraising are international expansion and investment in self-driving cars and artificial intelligence.

Yet other explanations are worth considering. Start with opportunity: If you're a rock-star Chinese company and there is a lot of cheap money being offered you, why not just take it? At a valuation of more than $50 billion, the $5.5 billion raised in May represents only about 11% of the company. It is generally far better to raise money when you don't need it than when you do.

Moreover, it is still likely that Didi is only mildly profitable, if at all. A large pile of cash can secure a long runway before an initial public offering is needed. It also scares off competitors. Most critically, it can enable spending on research and development as well as acquisitions far beyond what can be financed by operations. Given that President Jean Liu is a veteran of Goldman Sachs, you would expect a lot of deals in the future.

FINDING GROWTH Indeed, Didi likely needs new paths to growth. Beijing, Shanghai and other Chinese cities have imposed regulations requiring that ride-sharing drivers hold local residency. In theory, this could eliminate 90% of Didi's drivers as they are primarily rural migrants. That would be a body blow to the company's core business of providing ride-sharing in China.

How strictly the rules will be enforced is not clear. Didi has responded by pursuing city operating licenses. It is worth pointing out that Didi, and previously Uber, have operated ride-sharing services in a legal gray area in China for most of their existence. Ride-sharing was explicitly made legal only in mid-2016; the recent restrictions on drivers have thrown the industry's status into doubt.

Didi has been an aggressive growth company from the get-go. It started with taxi-hailing then moved to ride-sharing. Now it is venturing into car rental and integration with public services. It is also seeking a role in AI, auto financing and shuttle services. Didi is thus going after key roles in China's entire range of transportation services. So raising cash to continue its aggressive growth makes sense, especially with doubt shadowing its core ride-sharing business.

Another natural use of the newly raised funds would be to expand abroad given that Chinese app users are already going abroad in great numbers. Didi led a $100 million fundraising round for Brazilian ride-sharing app 99 in January, and earlier invested in India's Ola, Southeast Asia's Grab and the U.S.'s Lyft as part of a four-company alliance to take on Uber globally. In March, Didi opened an R&D center in Silicon Valley. It would not be a surprise to see another string of international investments over the next 12 months, especially in Southeast Asia.

ANOTHER DISRUPTION In theory, self-driving cars could reduce costs dramatically for Didi. Some reports suggest that driver fees, insurance and driver acquisition costs comprise two-thirds of the company's operating expenses.

However, the cost-saving argument misses the bigger implication of self-driving cars. If the technology is successful, it could wipe out the business model and competitive advantage of most ride-sharing services and be another major hit to Didi's current business.

The reason this sector has consolidated down to just one or two dominant companies per region is because of the powerful economics of two-sided platforms. To get drivers, you need riders. To get riders, you need lots of drivers. Being bigger in a region not only creates a superior service -- since more drivers means shorter wait times for pickups -- it also creates an insurmountable barrier for new entrants. 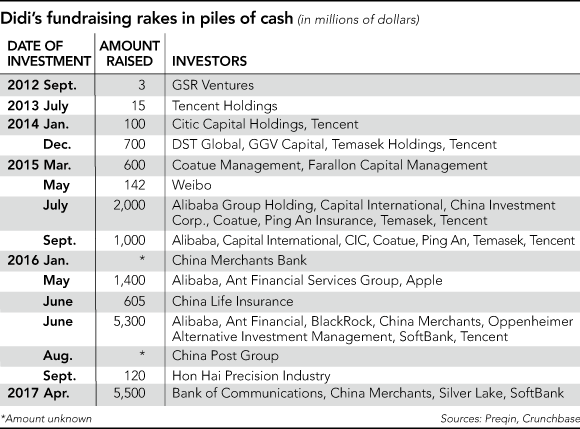 Self-driving cars will disrupt this competitive strength. If you no longer need drivers, you no longer have a two-sided network. Didi and Uber will then be exposed to new entrants with good cars, clever technology and different operating systems. Self-driving cars could make driver-rider networks obsolete, or marginal at best.

Possibly, though, there may not be an opportunity to be so dominant in this emerging market.

Google, Apple, Uber and many other major companies are rushing into self-driving cars. One to keep tabs on in China is Baidu. It is developing an open-source, autonomous driving platform involving hardware, software and cloud data services. This could let many more automotive and autonomous driving companies enter the business. Baidu's project will provide capabilities in obstacle perception, trajectory planning, vehicle control and vehicle operating systems. Note that Baidu first successfully road tested its self-driving cars on the highways of Beijing in December 2015.

Self-driving cars, AI, new regulations and international consolidation are all issues for Didi going forward. To compete, it will need to go up against many companies with deep pockets like Baidu, Apple, Google and Ford Motor. Winning in self-driving cars will likely require tons of R&D and M&A. Just for this fight alone, Didi will need piles of cash.

Jeffrey Towson is a professor of investment at Peking University's Guanghua School of Management, a private equity investor, and the co-author of "The One Hour China Book."