China's Shein has taken the womenswear world by storm. Now what? If headlines are anything to go by, the Chinese startup generating the most excitement these days isn't in ride hailing or addictive short videos but rather the venerable trade of selling women's clothes.

As with Didi Chuxing and TikTok parent ByteDance, Shein is drawing attention in part as an initial public offering candidate among investors searching for the next big thing.

While Didi is now feeling pressure from Chinese regulators, Shein's app has overtaken that of Amazon.com as the most downloaded shopping app in monthly U.S. rankings. According to research company Similarweb, Shein's website now gets more visits than any other clothing brand or retailer in the world.

A ranking in May of Chinese global brands by consulting company Kantar Group and Google put Shein ahead of high-profile names including Tencent, drone maker DJI, Trip.com and Tsingtao beer.

Inside China, Shein is little known. Though established in the eastern city of Nanjing in 2008, Shein sells only in overseas markets -- and claims to reach virtually every one of them. Revenues last year doubled to almost $10 billion and were on track to reach $2 billion last month, according to Chinese financial news publication Late Post.

Speed is a key part of Shein's success. The company has shortened the time from design of a new piece of clothing to mass production from the two to three weeks achieved by fast-fashion companies like Spanish chain Zara to just five to seven days.

Once new items go live on its platform, Shein monitors user behavior such as clicks and additions to virtual shopping carts to forecast demand and inventory needs, automatically updating orders to its suppliers as well as the companies that in turn provide them with materials. 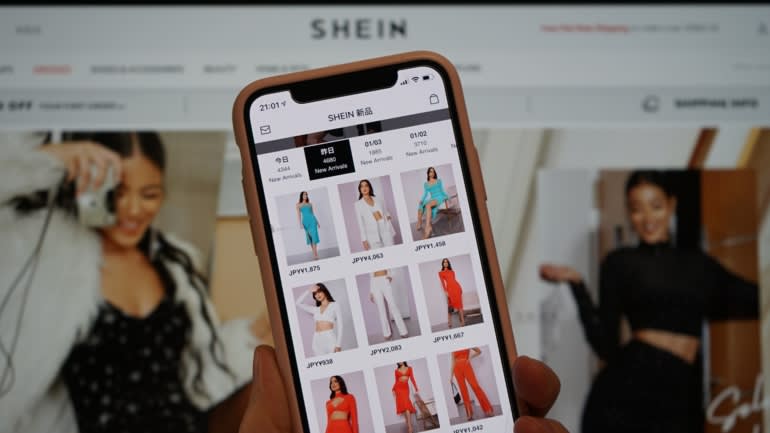 Thousands of low-price clothing items are added to Shein's website and mobile app each day. (Photo by Tomoko Wakabayashi)

With the help of world-class big data developers and machine-learning experts, Shein's algorithm is able to recommend items to users whose profiles are similar to those of previous purchasers. All these processes take place in real time, with almost no human intervention.

Shein also has an advantage in breadth. It releases over 1,000 new products a day, and sometimes closer to 6,000. A week of its new releases can match Zara's rollouts for a whole year.

Shein, though, prices its items much more cheaply than Zara, utilizing China's excess textile and apparel production capacity. Online, a pair of jeans seemingly comparable in look and quality to one that Zara sells for $49.90 is priced at just $17 on Shein.

This is possible in part due to Shein's unconventional approach to supply-chain management. This starts with paying suppliers on time, within 30 to 45 days. Industry billing practice is normally 90 days, but even then, invoices are still rarely settled on time.

Shein offers loans to suppliers to help them expand and provides them with its supply-chain management software -- usage is mandatory. The system allows Shein to automate every aspect of day-to-day dealings with suppliers, with real-time adjustments to production plans.

Shein now has more than 300 loyal suppliers. These companies are willing to accept orders as small as 30 pieces, which gives Shein the ability to test ideas cheaply. They are also able to deliver orders in seven to eight days, and sometimes as quickly as three days; average industry lead time is 15-20 days.

To get consumers interested in its clothes, Shein deploys a comprehensive marketing strategy that combines social media, user-generated content, search engine optimization, short videos and livestreaming as well as pop up stores in key locations like Paris and London.

With its eye on Generation Z, the rising cohort of young consumers keen to express themselves and be seen, Shein provides them not just clothes, but also a sense of participation and pleasant experiences. It encourages these consumers to upload pictures and videos of themselves wearing Shein clothes onto social media platforms while also aggressively promoting its products on TikTok, Facebook, Instagram and Pinterest.

The company also seeks endorsements from social media key opinion leaders as well as lower-cost "key opinion customers." Such influencers can receive free clothes each month and earn commissions of 10% to 20% on recommended sales if they maintain a steady stream of photo and video posts on Instagram, YouTube or TikTok.

From its initial focus on womenswear, Shein has expanded into men's and children's clothes as well as shoes, accessories, bags, home furnishings and beauty products.

Many leading internet companies, including Amazon.com, JD.com and Meituan, have similarly widened their product range over time. The key question is whether Shein will open its platform, as those companies have done, to outside vendors; it already appears to be experimenting with this kind of marketplace approach.

Another possible path would be to follow in the ways of TikTok, which has also found great success in the U.S. It has built on its core short-video service with livestream shopping, supported by loans and related services. Shein could similarly look at mobile payments and further offerings in supply-chain finance.

But should Shein change its model from "Zara goes online" to go up directly against Amazon.com, eBay and Alibaba Group Holding, its shortcomings will soon emerge, likely either in terms of customer traffic or logistics capabilities.

With around 7 million monthly active users, Shein's customer base is far short of the hundreds of millions of users that the major e-commerce incumbents boast. This matters as more users means more data and insights as well as more ways to monetize.

Shein's innovative supply-chain "pull" model has worked great at its current scale, but with a bigger user base, logistics pressures would grow. Such dynamics led Alibaba to establish Cainiao Smart Logistics Network and drove JD.com to pour billions of dollars into the building of its recently listed JD Logistics arm.

Ultimately, Shein will have to make a choice on whether to build a new online ecosystem or join up with an existing one. If it stays with its current model, it will inevitably meet limits in new product categories and then in acquiring new customers. When it reaches its impending crossroads, which way will Shein go?

Mark Greeven is a professor of innovation and strategy at the IMD business school in Lausanne, Switzerland and the co-author of the upcoming book "The Future of Global Retail: Learning from China's Retail Revolution."

Yunfei Feng and Patrick Reinmoeller of IMD also contributed to this report.