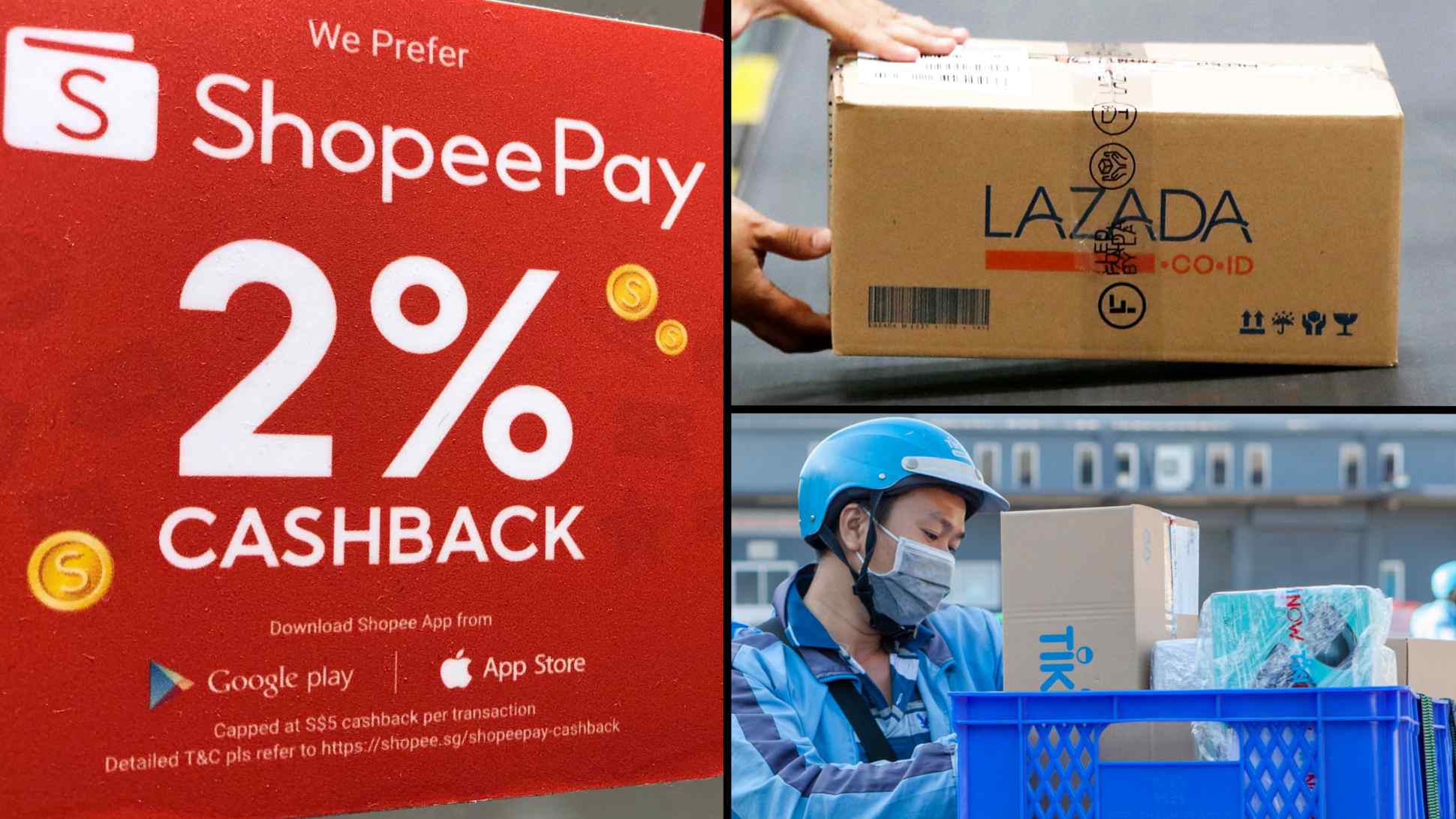 HO CHI MINH CITY/SINGAPORE -- For Nguyen Ngoc, a merchant in Ho Chi Minh City selling blouses and wallets, a typical way to reach online customers is through Facebook. But these customers often ask to switch to online marketplace Shopee for payment.

Ngoc understands why: Shopee is known for free deliveries.

"From the beginning, Shopee has been geared toward low fees. People associate it with free shipping," Ngoc told Nikkei Asia.

Free deliveries and low commissions are part of Shopee's aggressive marketing efforts in Vietnam that have helped it become the country's most popular e-commerce platform and grow through the COVID-19 pandemic. Shopee, owned by Singapore-based tech group Sea, drew 62 million monthly visits in Vietnam in the third quarter of 2020, up more than 80% from a year earlier.

Shopee's bullish expansion in Vietnam is part of a new phase of development in Southeast Asia's $100 billion digital economy. In the post-COVID era, e-commerce will be the cornerstone of a new range of alliances, and rivals are racing to build entire ecosystems to serve as many customer needs as possible.

The growth of the region's best-known tech startups, such as Singapore-based Grab and Indonesia's Gojek, was spurred by services such as ride-hailing. Now the rapid rise of Sea -- which has become Southeast Asia's most valuable company, worth about $100 billion -- is triggering fresh tie-ups and acquisitions that are set to redraw the landscape in 2021 and beyond as economies start to recover.

Backed by cash flow from its gaming business, U.S.-listed Sea is investing heavily in e-commerce and digital financial services. In the July-September quarter of 2020 its revenues for its e-commerce unit, which covers Vietnam and other countries, rose 2.7 times from a year earlier to $618 million, while the operating loss widened from $277 million to $338 million, mainly as a result of its campaign to gain market share.

The effort seems to be paying off. According to data from iPrice Group, Shopee was the most visited site in Indonesia, Malaysia, the Philippines, Singapore, Thailand and Vietnam in the third quarter of 2020. Only a year earlier, Lazada (owned since 2016 by China's Alibaba Group Holding) was No. 1 in the Philippines, Singapore and Thailand, while Indonesia's most visited was Tokopedia, the e-commerce group backed by Japan's SoftBank Group. Lazada's websites have lost their "most visited" status in many Southeast Asian markets.   © Reuters

Sea's rise is forcing a response. Lazada has joined hands with Grab in Vietnam, while Grab and Gojek have made new investments in digital finance businesses.

Until 2015, says Edwin Muljono, an Indonesia-based consultant at YCP Solidiance, Southeast Asia's digital economy "was in the growth stage of the industry life cycle, with many new players emerging [and] rapidly increasing demand with relatively low competition."

Now he says the market is in a "shakeout stage"-- which he dates to the acquisition by Grab of Uber's regional business in 2018. "Albeit continuing double-digit growth, the market has started to mature, and consolidation seems to be on the horizon," Muljono said.

Emphasizing the consolidation agenda, and the shift in priorities, Nikkei Asia learned this month that Gojek is in merger talks with Tokopedia -- a potential alliance that would create a huge tech group in Indonesia, Southeast Asia's biggest economy. Gojek has also been discussing a possible merger with Grab.

Southeast Asia is a unicorn hunting ground. Grab and Gojek have become the biggest, last valued at $14 billion and $10 billion respectively, but the region is home to 12 startups valued at $1 billion or more, according to a study by Google, Temasek Holdings and Bain & Company. In Tokopedia and Bukalapak, Indonesia has two e-commerce unicorns that are empowering millions of local merchants, including many mom-and-pop shops, to sell online through their platforms.

This landscape is being changed by the pandemic. Ride-hailing was hit hard by the travel curbs and work-from-home trend, with Grab and Gojek cutting 5% and 9% of staff respectively in mid-2020. But demand for e-commerce and food deliveries soared, and this will likely continue in the post-pandemic era. Investor sentiment chilled early in the pandemic. The total amount of capital invested in Southeast Asian startups fell 13% in the first half of 2020 from a year earlier, according to data compiled by Singapore's Cento Ventures. Travel curbs made fundraising meetings and due diligence difficult.

But growth trends are expected to remain intact. "The long-term outlook for Southeast Asia's digital economy remains more robust than ever," according to Aadarsh Baijal, a partner at Bain & Company, saying that factors such as "greater trust in technology" and "market forces creating significantly greater online supply" will give a permanent boost to the digital economy.

Vietnam is a prime example of the new battlefield and the prizes still to be gained. Its digital economies, including e-commerce, food delivery and ride-hailing, grew to $14 billion in 2020, up 16% from the previous year, and will expand to $52 billion in 2025, according to the Google-led report.

Shopee is now far outperforming its rivals in the country. Next is The Gioi Di Dong, also known as Mobile World, which had 29 million monthly visits during the same period. Tiki, a local e-commerce operator, followed with 22 million, and Lazada had 20 million, according to iPrice data.

Tuan Anh, managing director for Shopee in Vietnam, told Nikkei Asia that Shopee has attracted "users into our ecosystem by ramping up the integration of e-payments." 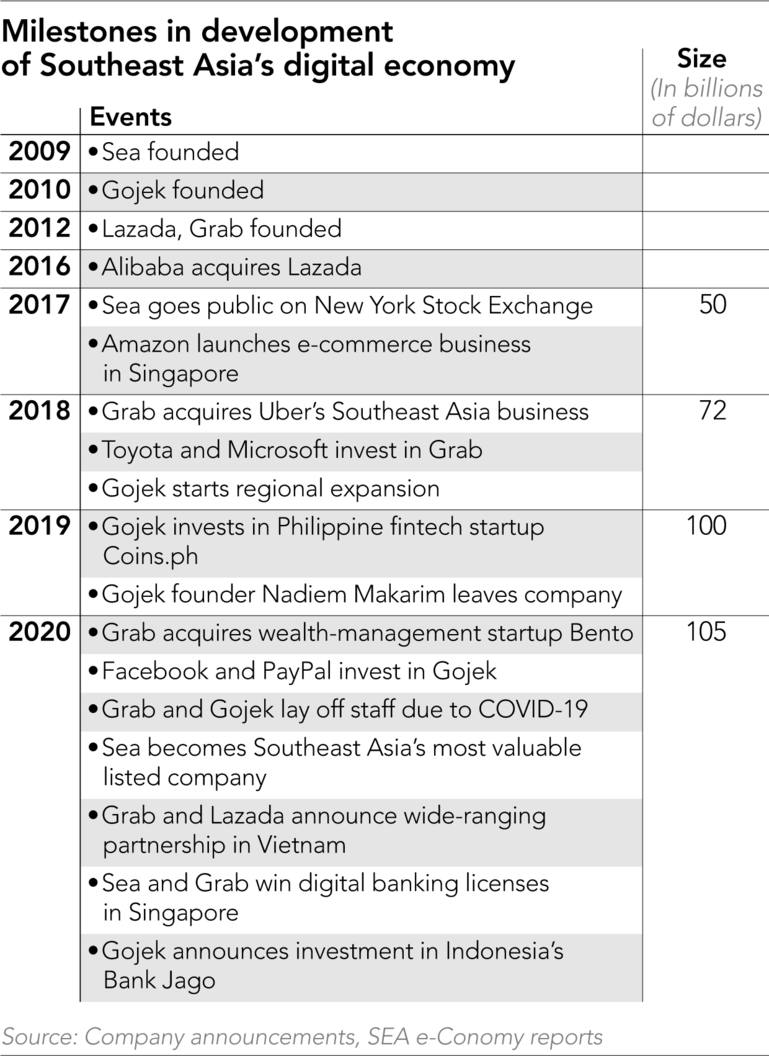 To counter Shopee, Singapore-based Lazada in November joined hands with Grab in Vietnam, a wide-ranging partnership that offers Grab a way to strengthen its focus on e-commerce.

"We're really hopeful that we'll be able to bring all of Grab to our e-commerce partners," Grab President Ming Maa said at a startup event in late November.

Meanwhile, Tiki promises two-hour deliveries thanks to the end-to-end supply chain it has with nationwide fulfillment center systems. It also launched its own credit card with a local bank in 2020, showing that it wants to go beyond e-commerce operations.

The partnerships forged in Vietnam by Lazada and Grab could possibly be replicated in other Southeast Asian markets. "I see a lot more that we can be working on together," Grab's Maa said. His unicorn has already taken the partnership route in Thailand for marketing campaigns around Nov. 11 "Singles Day" sales.

Lazada together with Google in November started digital training courses for its online sellers so they can improve their sales, which would help improve Lazada's own performance, too. It has launched what it calls a "sell to China" program, which provides cross-border e-commerce opportunities for Southeast Asian merchants by capitalizing on parent Alibaba's global platform. Grab and Lazada could replicate their Vietnam partnership in other Southeast Asian markets.   © EPA/Jiji

Other international players are also responding. Amazon.com of the U.S. is increasing its presence in Singapore. In food delivery, Germany's Delivery Hero is aggressively expanding in Southeast Asia through its Foodpanda brand. Japanese messaging app Line has Line Man, which is among the most popular food delivery services in Thailand.

Looking ahead, the global economy is starting to rebound, backed by monetary easing and fiscal stimulus as well as the distribution of coronavirus vaccines. Some unlisted startups have started to receive more funds, with Gojek in November bagging $150 million from Telkomsel, Indonesia's state-owned mobile operator.

Listed companies like Sea are already taking advantage of the stock market rally. In December, Sea raised nearly $3 billion through new share offerings for purposes "including potential strategic investments and acquisitions." While most startups, including Sea, are still making net losses, the fresh capital should allow them to further expand, fueling competition.

Muljono of YCP Solidiance pointed out that the major digital players in the region like Grab are rapidly expanding their services to become lifestyle apps, and big investors such as Chinese and U.S. tech giants and local conglomerates prefer to invest in existing big players.