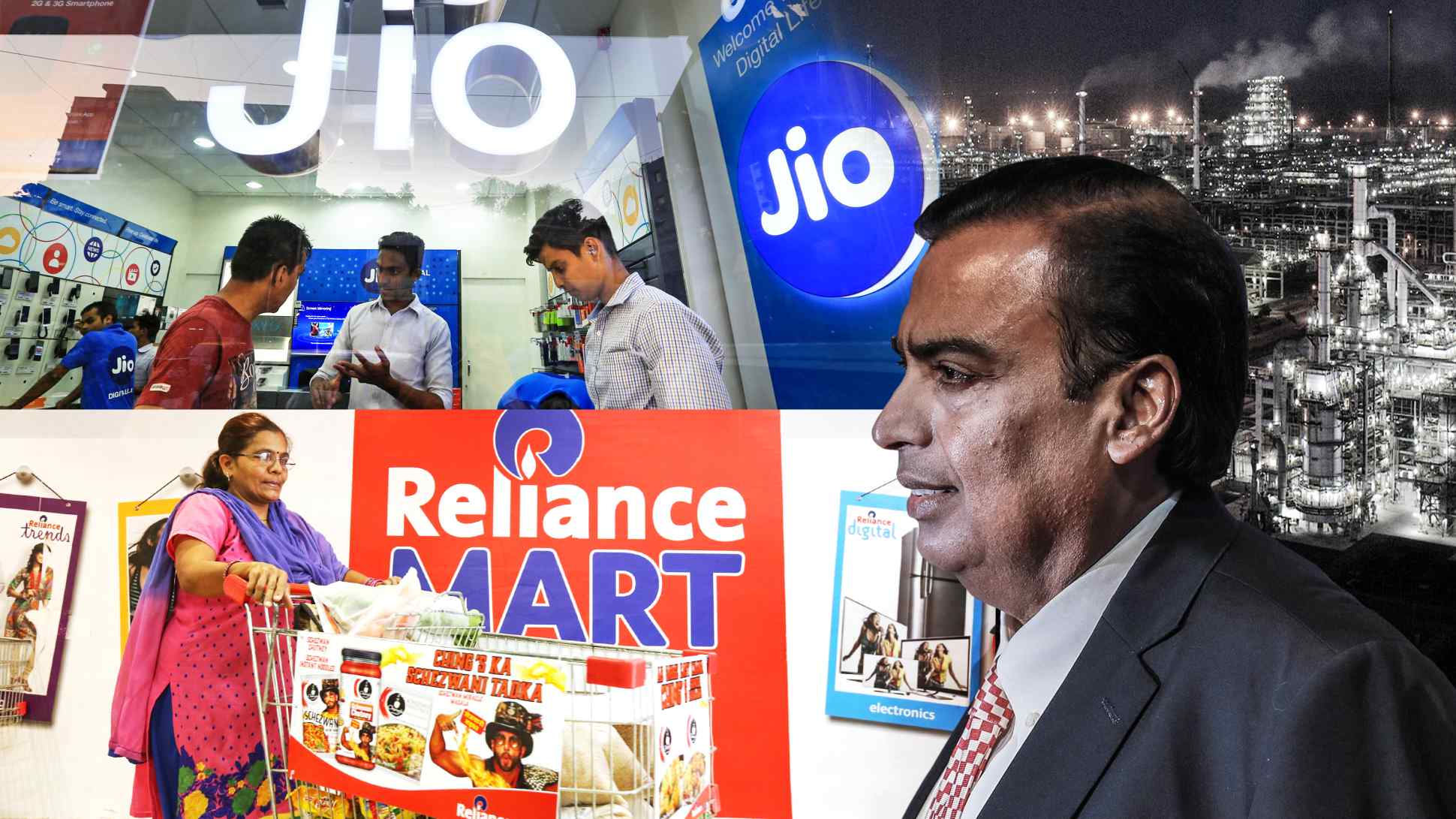 TOKYO -- India's struggle against the coronavirus pandemic has not stopped a dealmaking whirlwind at Reliance Industries. As the country has slowed down, its biggest corporation by sales and market capitalization has only seemed to speed up.

Since Facebook said on April 22 that it would invest $5.7 billion to buy 9.99% of Jio Platforms, Reliance's wholly owned digital business unit, a string of global tech companies and financial investors have followed suit.

Mubadala Investment, Abu Dhabi's sovereign wealth fund, on Friday became the latest. It said would take a 1.85% stake in Jio for $1.2 billion. U.S. private equity funds Silver Lake, Vista Equity Partners, General Atlantic and KKR have already announced investments totaling $4.6 billion in Jio, meaning 19% of the telecoms unit is now in the hands of outside investors.

As if that were not enough to occupy Reliance's financial advisers, the company has also carried out India's largest rights issue, inviting investors to subscribe for more shares. It will raise $7 billion to help Reliance meet a pledge to cut group net debt, which had reached $22 billion, to zero by March 2021.

For Mukesh Ambani, billionaire chairman of Reliance and India's richest man, the rights issue and stakebuilding in Jio reflect faith in his investment pitch: that his company can outgrow its industrial origins and become a consumer-facing tech behemoth for a digital age.

"Our vision is always rooted in furthering India's inclusive and accelerated growth, propelled by the adoption of digital technologies, that helps improve the lives of 1.3 billion Indians ... our shareholders endorse this vision and mission. Their support further strengthens our resolve as we firmly set forth to build a New Reliance for a New India," he said in a statement after the rights issue concluded on June 3. Reliance can "strategically reinvent itself as a technology platform company," he said at the annual general meeting in July 2018.

"Mukesh Ambani has had this vision to vertically integrate multiple sectors and do digital cross selling across those sectors since long before he launched Jio," Sanchit Vir Gogia, chief analyst and chief executive of Greyhound Research, an independent technology industry research firm, told the Nikkei Asian Review. "What they are trying to do is connecting each vertical built with physical assets onto the digital platforms, and then connecting different verticals through the digital platforms. I call it 'phygitization' -- a combination of physical assets and digitization."

Even the conduct of the rights issue, carried out digitally amid the constraints of the coronavirus lockdown, was taken by Reliance as proof of its strategy. "This shows not only the power of the emerging digital age, but also the potential of India to be a pioneer and an innovator in this age," the company said.

For years Reliance, founded by Ambani's father, Dhirubhai Ambani, in 1966 as a textiles business, was an archetypal "old economy" concern. Reliance dominates swaths of Indian industry. Its Jamanager oil refinery is the world's largest. Marrying its textiles and petrochemicals segments, Reliance also claims to be the world's largest producer of polyester fiber. In the financial year ended March 2015, less than 2% of Reliance's earnings before interest, tax, depreciation and amortization came from its digital and retail businesses. It was much the same two years later. Ambani's vision that they could generate 50% seemed ambitious.

But after heavy investment in Jio the share reached 35% in the financial year that ended in March, up from 24% the previous year. Nomura projected last month that the ratio will reach 50% in the current financial year, citing high growth in the new sectors as well as the slowdown in refining and petrochemicals.

At the heart of the plans is Jio, launched in September 2016. Helped by being less burdened by the expensive licenses that have crippled some of its rivals, Jio's subscribers reached 388 million at the end of March, making it India's leading provider.

Promising fast and affordable data services, Jio has ripped users from competitors such as Bharti Airtel and Vodafone Idea -- not to mention former No. 2 Reliance Communications, which was run by Anil Ambani, Mukesh's younger brother, after an acrimonious family split.

Now what counts for Reliance is what other businesses it can build on this platform.

To add to its mobile dominance, Jio in September began rolling out fiber-to-the-home high-speed connectivity. Its purchase of two major cable TV operators with thousands of local operators across the country has given it the means to provide the so-called triple play of multichannel broadcast TV programs, broadband internet and telephony. 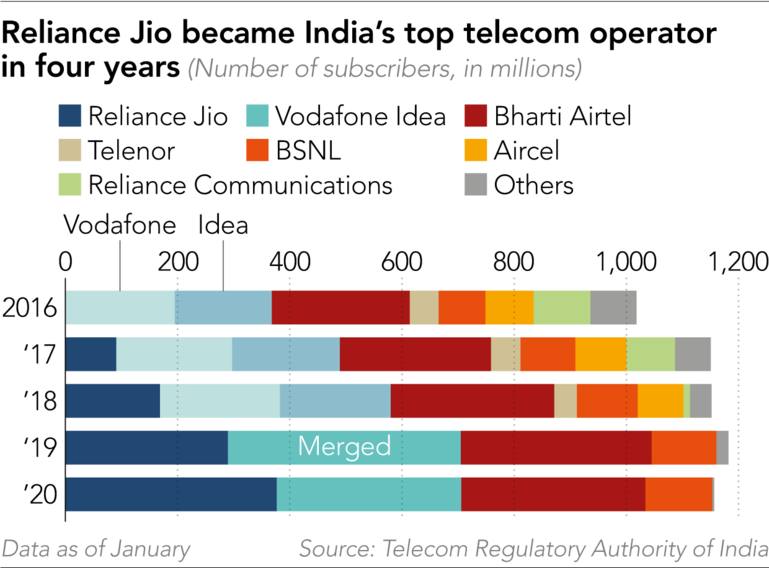 In February Reliance consolidated these media assets into a single vertically integrated group, Network18 Media and Investments, which can earn revenue from upstream content production to media to distribution.

"From day one, Jio has aspired to become a vertically integrated company mirroring its parent's success in the oil and petrochemical businesses. Their telecom and media segments have established the base and middle layers. Now it is developing upper application layers," said Mihir Shah, vice president at Media Partners Asia, a Hong Kong-based media industry researcher and consultancy.

Reliance Retail is by far the No. 1 retailer in India's formal economy with 11,784 stores and 1.6 trillion rupees ($21 billion) in revenue. But Reliance has grown more ambitious, seeking to link e-commerce to the much bigger informal Indian retail sector: something Ambani has called "a $700 billion opportunity." The strategy is to connect over 10 million unorganized mom-and-pop kiranas, or neighborhood general stores, and 20 million micro and small businesses with Reliance Retail's wholesalers, grocery stores, farmers, food and daily-goods producers -- all trading on a BtoB platform. JioMart will connect retailers to consumers in a single-window online store.

A shape of things to come was shown in the Facebook-Reliance deal over Jio, which included an agreement to collaborate on the JioMart platform. Many Indians expect JioMart to build closer ties to WhatsApp, the messaging service owned by Facebook. India is the largest market for both Facebook and WhatsApp.

Developing the entire JioMart ecosystem to connect millions of merchants will not be straightforward. Local media reports say many kirana owners are reluctant to be included in the organized, digitized ecosystem. Many of them have been dealing in cash with no invoices, avoiding tax.

"Beyond the fabulous opportunity the deal offers, we do see formidable execution challenges," Edelweiss analyst Jal Irani cautioned in a report.

In shifting Reliance toward a digital model, Ambani wants to improve the way his empire is valued. Executives look enviously at the market capitalization and valuation multiples of U.S. tech giants such as Apple and Amazon. They want investors to give Reliance more credit for its fast-growing consumer businesses. Like many sprawling companies, Reliance labors under a "conglomerate discount" -- its share price does not fully reflect the value of its holdings. 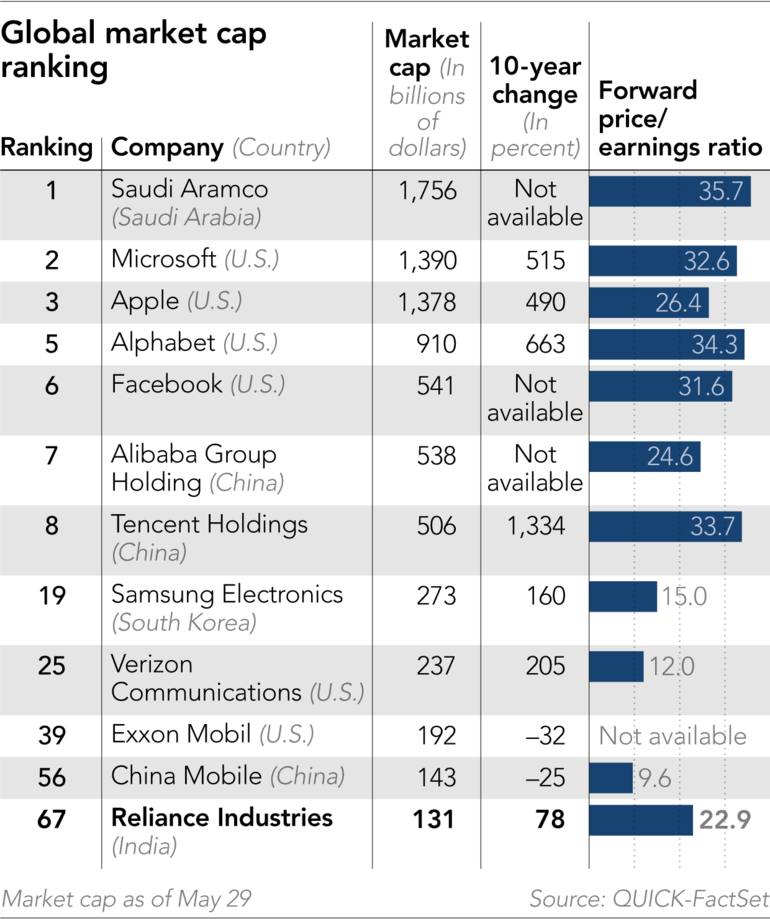 Part of Reliance's intended answer is to transform Jio and the retail unit into stand-alone publicly investable companies. It intends to divest minority stakes in both and hold initial public offerings for each within five years.

Those IPOs would mark the group's first major structural change since the original Reliance group was split into two in January 2006, to settle a bitter inheritance dispute between Mukesh and Anil. Network18 Media and Investments is already separately listed, with 64% owned by Reliance.

Analysts expect the Ambanis to keep a majority stake in Reliance, which in turn would continue to control the three other listed businesses. Facebook would retain its stake in Jio, they expect.

That could help unlock value in both Jio and the retail arms. The investments by Facebook and others value Jio at more than $66 billion, which would put it among India's top five stocks by market capitalization. Reliance Retail was valued at about $34 billion last December in a share swap deal between Reliance and employees, while Network18's market cap is around $330 million.

But it might not help the valuation of Reliance, which would still be partly a holding company. If one deducts the assumed values of its other businesses from its market capitalization of around $130 billion, it suggests the oil to chemicals business is valued at just $30 billion -- although it earns 65% of consolidated EBITDA.

"The equity value of the old businesses of oil and petrochemicals is very low," independent investment adviser Sandip Sabharwal said.

As Ambani recognizes, Reliance's diversification into technology and retail, which are more highly valued by investors, has worked positively for its share price. But reshaping an empire is a delicate endeavor. The BSE (formerly the Bombay Stock Exchange) building in Mumbai. Reliance Industries hopes to boost its valuation through its digital businesses   © Reuters

SP Tulssian, another independent investment adviser who has been watching the Ambani-led group for decades, points out that some investors might find Reliance less attractive. "Today there are some investors who do not like old economy stocks but still hold Reliance shares, regarding it as a proxy to Jio," he said. "But after Jio itself is listed, they will lose reason to."

Still, Tulssian thinks Ambani "is a man who knows the pulse of the market."

"If he senses the current plan is harmful to Reliance shareholders," Tulssian said, "he may well adjust."

Whatever the decision, once Reliance cashes in the value it has accumulated in those new-age businesses, it may shift the center of the family conglomerate from the parent company to a newer business division -- just as Japan's Toyota Motor outgrew and came to dominate its parent, a maker of textile looms, in the 20th century.

Once digital and retail businesses reach 50% of group cash earnings, Mukesh Ambani will be able to declare he has molded the inherited family business according to his own vision.

Yet it might not spell the end of the reshaping of Reliance. Ambani has another industry in his sights: financial services.

Back in 2015, Reliance obtained a payments bank license from the central bank, and in 2018 it launched Jio Payments Bank behind its Jio Pay mobile wallet services. On April 30, Reliance quietly announced financial services as its newest business segment. Some took it as the latest sign that Reliance wants to become an Indian version of Alibaba Group Holding, the Chinese e-commerce giant founded by Jack Ma -- one of the few who rivals Ambani on Asia's rich list.

"Mukesh Ambani's next big thing will most likely be the financial sector," Gogia predicts. "With that accomplished, Reliance will look bigger than Alibaba."