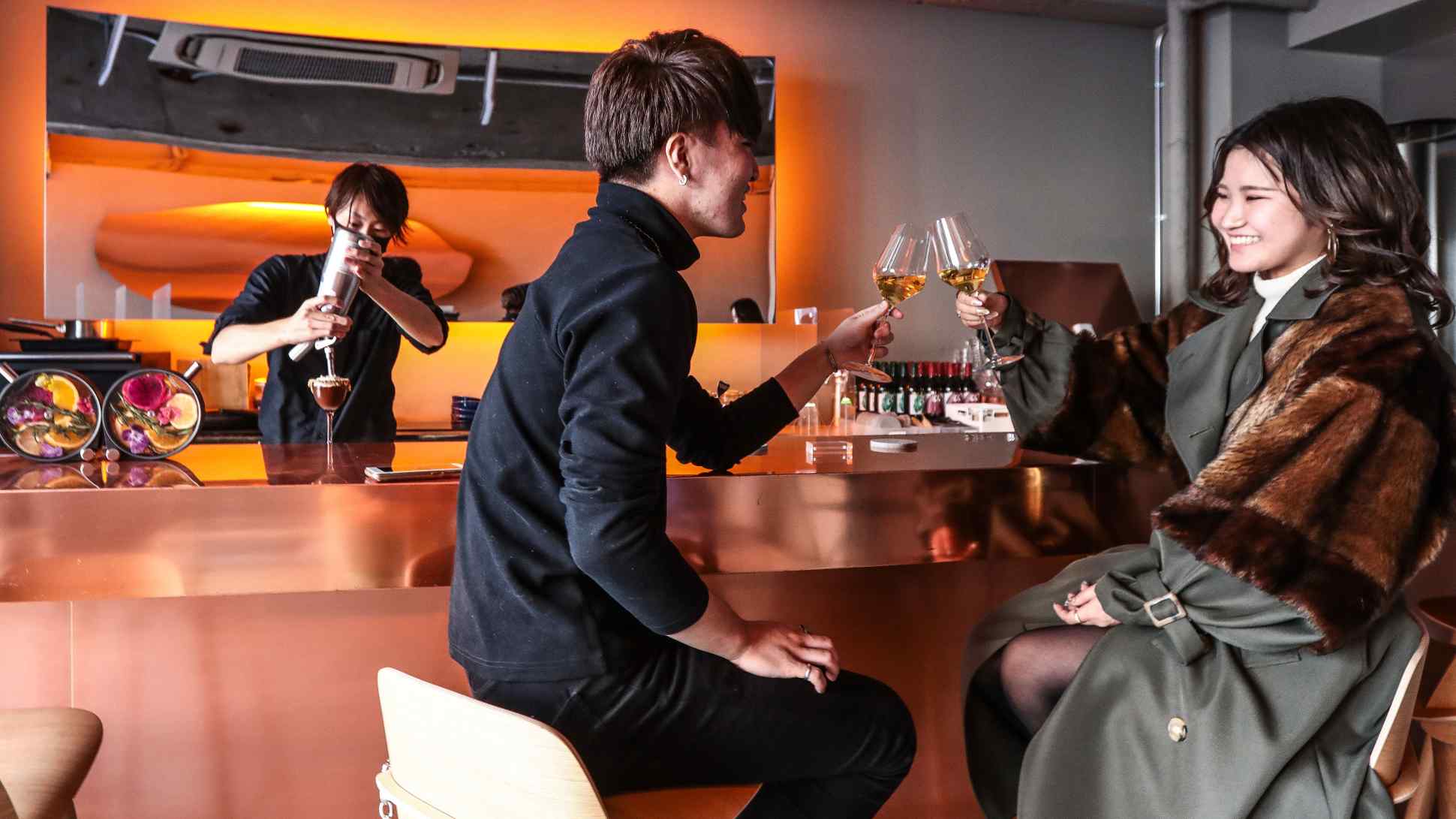 TOKYO/SEOUL/HO CHI MINH CITY -- Roppongi is suffering -- and with it Japan's drinks makers.

Bars in the popular Tokyo nightlife district must close at 8 p.m. under a central government-imposed "state of emergency" to tackle the coronavirus, which is squeezing alcohol sellers. But the greater long-term problem for Japan's brewers and distillers might be seen in the name of one Roppongi bar: 0% Non-Alcohol Experience.

When 0% opened its doors last summer it was billed as Japan's first nonalcoholic and vegan bar -- and was a big hit. "As soon as we opened in July, it got fully booked. It was unexpectedly popular," a representative of operator The Human Miracle told Nikkei Asia. Most of the customers at 0% are in their 20s and 30s -- a generation that doesn't imbibe like previous ones and would not normally have gone to Roppongi.

"People who cannot drink alcohol just want to drink something high quality and have a variety of products, not just orange juice or nonalcoholic substitutes for alcoholic drinks," Kentaro Takahashi, a 22-year-old student at 0%, told Nikkei.

How drinks companies go about appealing to such customers is a challenge but also an opportunity for Asia's drinks giants as they deal with damaging long-term trends in their core alcoholic beverage business.

Fewer drinkers, changing consumer tastes, tightening restrictions on alcohol and, of course, the pandemic are a sober reality for the industry. But companies have the chance to capture a new generation of customers if they can mix the right cocktail to appeal to changing tastes. Asia’s drinks makers are responding to damaging long-term trends in their core business of making and selling alcoholic beverages by increasingly offering reduced and even zero content products. (Photo by Ken Kobayashi)

Asahi Group Holdings, a top Japanese beverage maker, said in December that its beer subsidiary will increase nonalcoholic and low alcoholic drink sales volume to 20% of its portfolio by 2025, or more than three times in 2019.

"[The number of] consumers who want to drink nonalcoholic [beverages] is increasing," Akiyoshi Koji, Asahi Group Holdings CEO, said in an interview with Nikkei, suggesting the trend was accelerating as virtual social gatherings replace physical get-togethers during the COVID-19 pandemic.

"There was an atmosphere in Japan where people had to drink alcohol at parties due to peer pressure. But, when it comes to online drinking parties, consumers start to drink what they really want," Koji said, adding that he was considering nonalcoholic wine and whiskey highball in addition to nonalcoholic beer. Non alcohol wine is poured into a glass at a Tokyo bar. According to Euromonitor International, only 6% of millennials are daily drinkers in the Asia-Pacific region, compared with about 14% of baby boomers. (Photo by Yuki Kohara)

Certainly, companies like Asahi must do something. Japan's beer market shrank for the 16th straight year in 2020. And the business environment will remain "harsh even after the coronavirus," Satoshi Fujiwara, an analyst at Nomura Securities wrote in a report in an October report. Beer demand by restaurants and bars will only return to 80% of its pre-pandemic level even in fiscal year 2022, Fujiwara said, with trends such as teleworking expected to persist even if the COVID-19 crisis is overcome.

According to Euromonitor International, just 6% of millennials are daily drinkers in the Asia Pacific region compared with about 14% of baby boomers. The report also said that 63% of millennials are trying to reduce or quit drinking alcohol. Reasons vary but most simply want to feel better and avoid long-term health risks.

Yoshinori Isozaki, president of Japanese drinks major Kirin, said his company is focused on healthier living trends. "Alcohol will not be eliminated, but it is not healthy," he told Nikkei. "Demand for nonalcoholic beverages is increasing because people want to refresh their working from home routine." Isozaki acknowledges that World Health Organization alcohol warnings have also pressured beverage makers.

In 2020, its Kirin Brewery beer unit saw a 10.4% increase in its nonalcoholic drink sales volume, while beer volume dropped 18.6%. The company this year aims to increase nonalcoholic sales volume by 23.2% from the previous year. 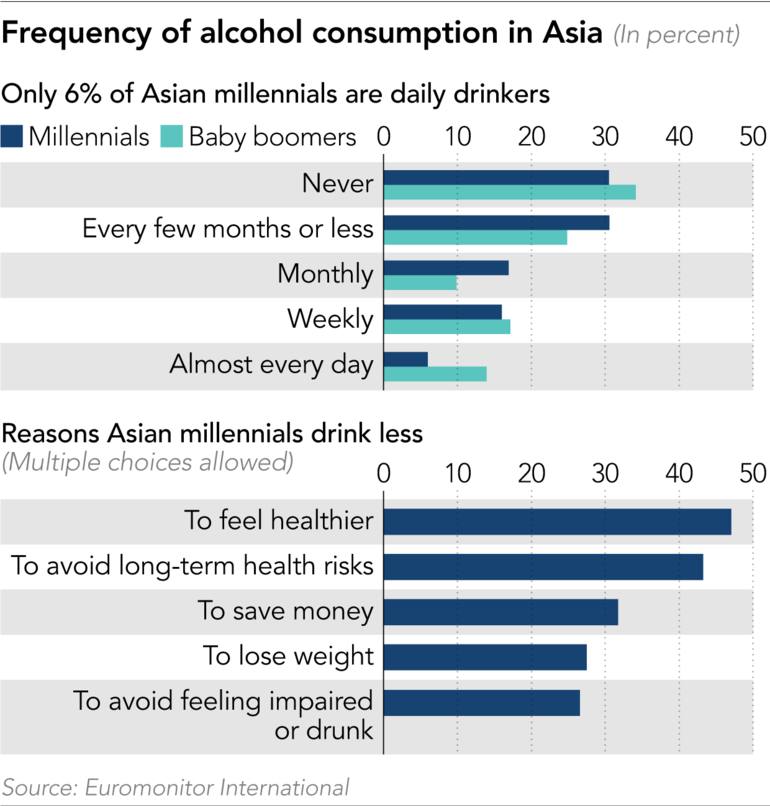 Although Kirin's wine business is small, it aims this year to double sales volume of low alcoholic wine from last year in response to the growing demand for nonalcoholic options. It will also develop nonalcoholic wine.

Hiroshi Saji, a Mizuho Securities analyst told Nikkei that "investors' interest in the nonalcoholic business is higher than before." Saji cited an increasing emphasis on proper drinking practices from the perspective of environmental, social and governance, or ESG, investment principles. "Nonalcoholic drinks are becoming a more important business for both Asahi and Kirin as the domestic beer market is not growing," he said.

Despite population growth, total consumption of alcoholic beverages in the Asia Pacific region is expected to fall to 85.5 billion liters in 2024, down about 4.7 % from 2014, according to Euromonitor International. It forecasts that demand for nonalcoholic and low alcohol beer will rise by 18.9% to 395.5 million liters in 2024 compared with 2014. In South Korea, makers of soju, or distilled liquor, are coping with changing market trends by increasing mildness. Hitejinro, the biggest soju maker in the country, has been lowering alcohol by volume, or ABV, almost every year recently for its benchmark soju brand Chamisul Fresh to 16.9% in 2020 from 19% in 2012. Lotte Chilsung Beverage, the No. 2 player, also trimmed ABV of its Chum-Churum soju to 16.9% from 17% last year.

Hitejinro said the company cut ABV as consumers say they want milder liquor they can enjoy at home during the pandemic. Homemade soju cocktails are increasingly popular, especially among millennials -- a contrast with elders who enjoyed strong liquor at company dinners. Low-alcohol soju bottles on display at a pub in Seoul. Makers of the South Korean distilled liquor are coping with changing market trends by making the drink milder.   © Reuters

The trend comes as South Korea has been tackling a culture of overwork with legislation that slashed the maximum workweek to 52 hours from 68 for some large companies. That means fewer late toiling office workers, thus decreasing opportunities for company dinners with heavy drinking.

The country's nonalcoholic beer market is expected to double by 2024, according to Euromonitor International, as local and international brands such as Oriental Brewery and China's Tsingtao Brewery release more products, analyst Oryoon Lee told Nikkei. She said another growth driver is that nonalcoholic beers are available online during the pandemic, whereas South Korean bans online sales of alcohol.

The remarkable economic growth of Asian countries such as South Korea and Japan was fueled by long working hours. But in recent years, the culture of increasing camaraderie and relieving stress by drinking has hit social headwinds, while widespread telework during the coronavirus adds pressure. 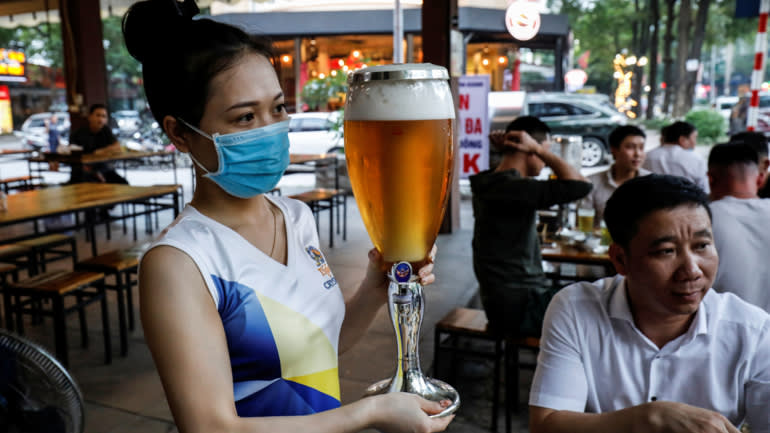 A waitress carries an oversized glass of beer at a restaurant in Hanoi. Drinks makers had seen big potential for alcoholic beverages in Southeast Asia, especially in Vietnam with its increasingly young and middle class population.   © Reuters

In contrast to aging and shrinking markets like developed countries in Northeast Asia, drinks makers had been seeing big potential in Southeast Asia, especially Vietnam with a young and increasingly middle class population. But there are signs of change.

"The shocks to the market this year have forced us to look very hard at our core mission statement and how we go about doing our business." Stanley Boots, founder of Vietnam's 7 Bridges Brewing Company, told Nikkei in December.

Hardest hit were local companies that depend on tourism, such as 7 Bridges Brewing, which said revenues plunged 80% when Vietnam sealed borders to contain the virus. With no sign of an end to the travel ban, 7 Bridges and other businesses that rely on nightlife must pivot. Boots said the downturn pushed him to focus on Vietnamese drinkers. For example 7 Bridges has introduced beer recipes catering to locals, who prefer lagers to ales.

Ho Chi Minh City-based SSI Securities Corporation forecast Vietnam's beer consumption could rise 20% in 2021, in contrast to a drop of 12.7% in the first half of 2020 from the year-earlier period. But it doesn't necessarily mean a return to previous growth due to the rise of concerns about health, alcoholism, and road fatalities.

Government regulation is also casting a shadow. In January last year, Vietnam introduced Decree 100, ratcheting up fines and prison terms for drunken drivers. Alcohol is one of the top three causes of vehicle accidents, costing Vietnam the equivalent of 1% of gross domestic product, according to the government. The decree pushed beer consumption down 25% that month versus January 2019, according to Rabobank Research.

Bars and brewers have responded by arranging rides home for drinkers, as well as encouraging them to bring in growlers for take away refills. Heineken, which has a 23% market share according to S&P Global, added alcohol-free beer to its Vietnam lineup in March, joining low alcohol options like Sagota and Asahi's Dry Zero.

Jarred Neubronner, senior analyst at Euromonitor International expects Vietnam's non-alcohol beer market will maintain double digit growth until 2025. "This will be driven by leading brands Heineken and Sagota, and the entry of other international brands looking to compete for a share of the growing pie," Neubronner said. He sees Heineken as a strong player not only in Vietnam but also in nearby markets like Thailand, Malaysia and Singapore. "Heineken stands to benefit from marketing and production synergies across its markets," he added. Lorin Winata, a 27-year old from Singapore, said she often felt pressure to drink. "This was particularly so during my time working in investment, as I would often be expected to attend networking events after work," Winata recalled.

In response she launched Melati, which makes nonalcoholic drinks. The Singapore-based company released its first product, an aperitif crafted from 26 different Asian botanicals, in October.

For Winata, these are exciting times. "Now more than ever people are concerned with what they are putting into their bodies -- from the health benefits of each product, to how it is sourced and made," she said.