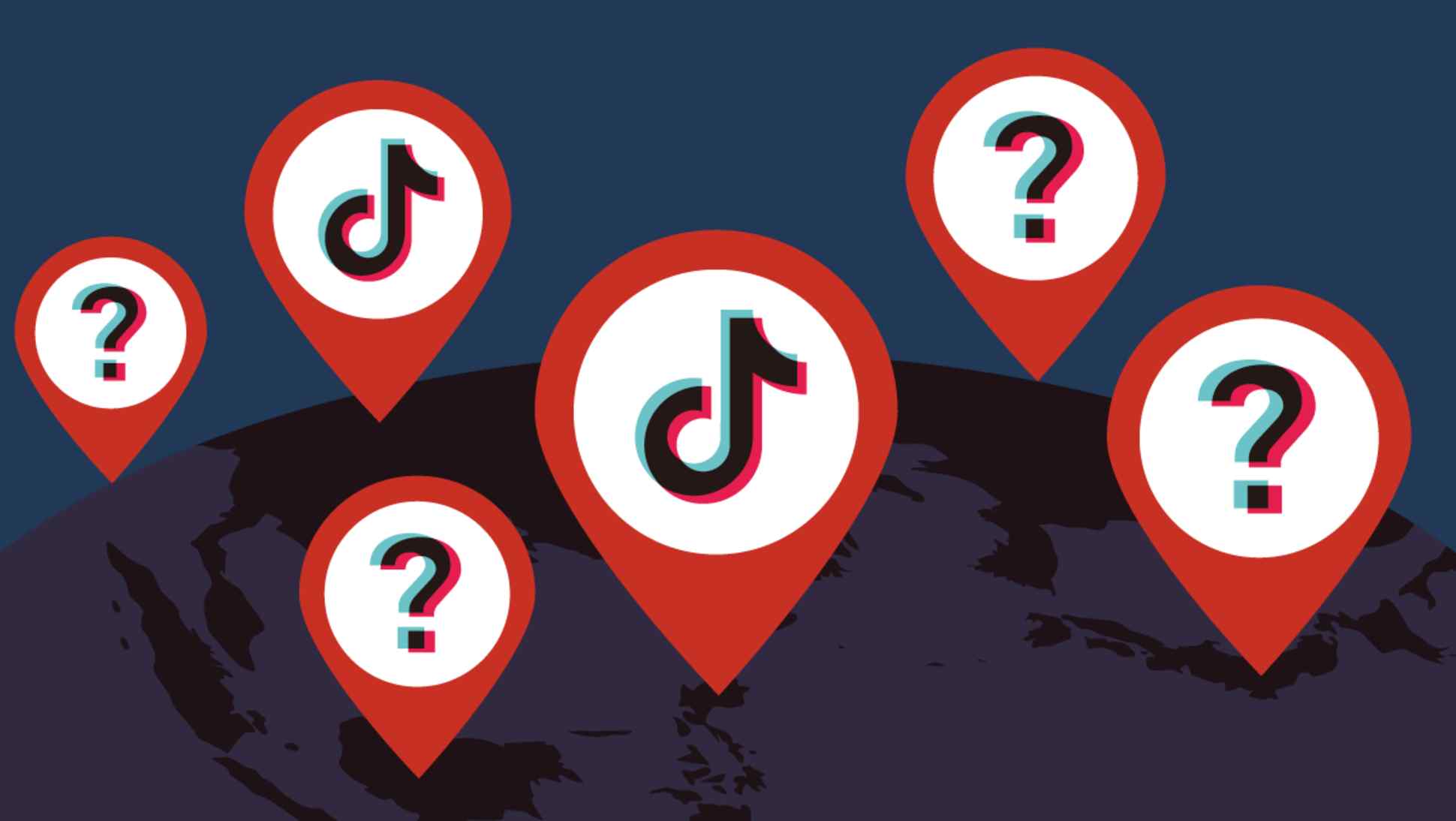 Asia's divide over TikTok: troubled in Tokyo, chilled in Manila

TOKYO/HONG KONG/SINGAPORE -- For Saitama Prefecture, north of Tokyo, TikTok seemed a game-changer that could finally put it on the map.

The prefecture best known as a bedroom community for Tokyo commuters has long struggled to grab a piece of the spotlight from its giant, cosmopolitan neighbor. To improve its image with young people, local officials opened up a TikTok account and had famous people who were born in the prefecture sing its praises. The public relations push was a success, with many people checking out more than 20 videos from Saitama-loving celebs.

The ties between Saitama and the Chinese short video sharing service grew stronger after that. In June, the prefecture signed a partnership agreement with the Japanese unit of ByteDance, TikTok's parent, hoping to draw even more attention to what the local government was up to.

But that was before the U.S. began alleging that TikTok posed a security threat. Many worried Saitama citizens started calling in, worried that their personal data might wind up in the hands of the Chinese government. By late July, concerns over the app put an abrupt end of the prefecture's PR campaign. All the videos were deleted.

"We cannot proceed if our citizens are concerned," said a Saitama official, adding that the prefecture is not aware of any actual security risks from the app. 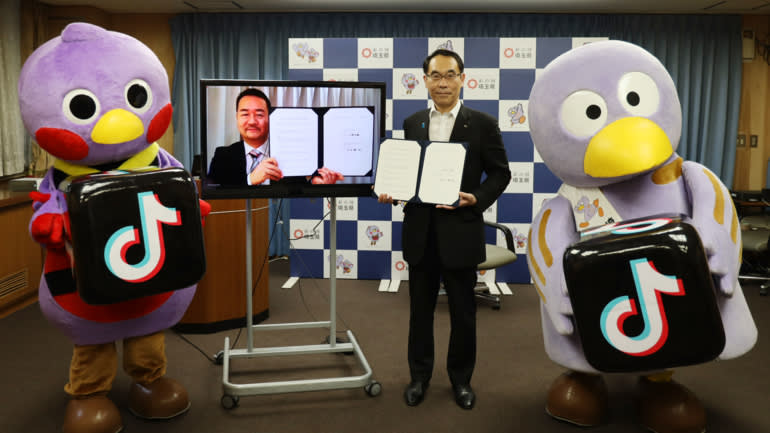 In June, Saitama Prefecture signed a partnership agreement with the Japanese unit of ByteDance, TikTok's parent. But security concerns over the app put an abrupt end to PR campaign.

Saitama citizens are far from alone in their concerns. Osaka and Kanagawa prefectures, and the city of Kobe, in western Japan, have stopped using the app or deleted video, after citizens demanded action. National policymakers are also responding. In late-July, lawmakers from the ruling Liberal Democratic Party voiced concerns about Chinese apps and software, and agreed to ask the government to limit their use.

Elsewhere in Asia, opinions are split over China's first globally successful social media platform. While each country's reaction is heavily influenced by its ties to Washington and Beijing, the mild response in most countries owes partly to TikTok's success in differentiating its overseas operations from those in China. Still, rising US-China tensions show the limits of this approach while also highlighting TikTok's potential to put China in a favorable light. 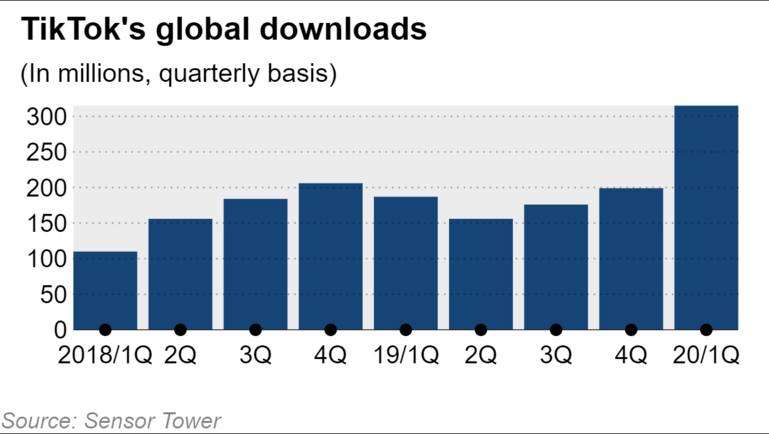 "Asian nations' reaction to TikTok is a reflection of their political attitudes toward China," said Michiaki Tanaka, a professor at Tokyo's Rikkyo University Graduate School of Business.

India's government, for example, blocked TikTok and other Chinese apps in June as a border dispute between China and India flared up. Japan, meanwhile, as a close ally of the U.S., typically follows its lead on Chinese issues and appears to be doing so over TikTok. 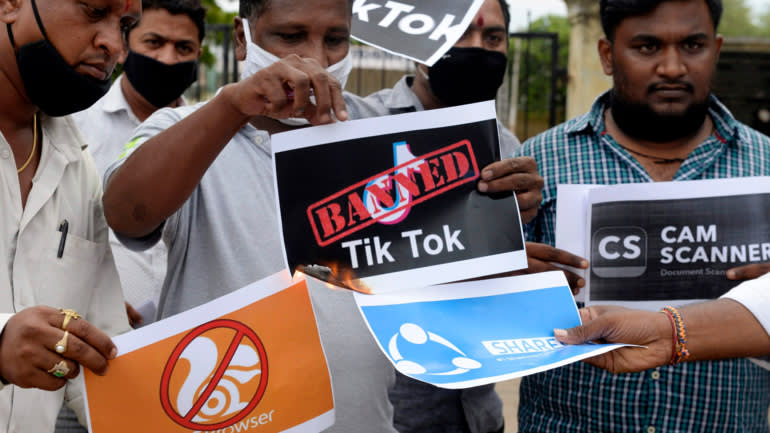 People hold posters with the logos of Chinese apps in support of the Indian government for banning the wildly popular video-sharing 'Tik Tok' app in Hyderabad in June.   © AFP/Jiji

While India and Japan are taking a wary approach to Chinese apps and technology, other Asian countries are more sanguine, or are paying little attention to the issue.

In the Philippines, Presidential Spokesman Harry Roque said in August that the country will not ban TikTok as the government finds "no reason" to shut the app down, stressing that President Rodrigo Duterte respects free speech.

Singapore has not expressed privacy concerns over TikTok, either. The National Youth Council, an agency tasked with advancing the interests of young Singaporeans, partnered with TikTok on a campaign that ended in August in which youths were encouraged to show off their talents on the Chinese platform.

"I don't need to include my personal [contact] number on any social media, so it is not really a problem," said Singaporean freelance actor and a social media influencer Michael Kwah. Kwah believes the benefits of TikTok are well worth the risk of having his personal information compromised. "When you post a video [on TikTok], your exposure is instant, so everybody will get to see it. So naturally your work will be seen," Kwah said.

Others have reservations. A petition to ban TikTok in the city-state has appeared on the change.org website. A netizen by the name of Liu Yang Feng started the petition, saying, "The Chinese Communist Party influences TikTok owner ByteDance," and that "TikTok presents a greater threat than [telecom equipment maker] Huawei." So far, however, Liu appears to be in a tiny minority: After about two months, the petition has attracted just 19 signatures. 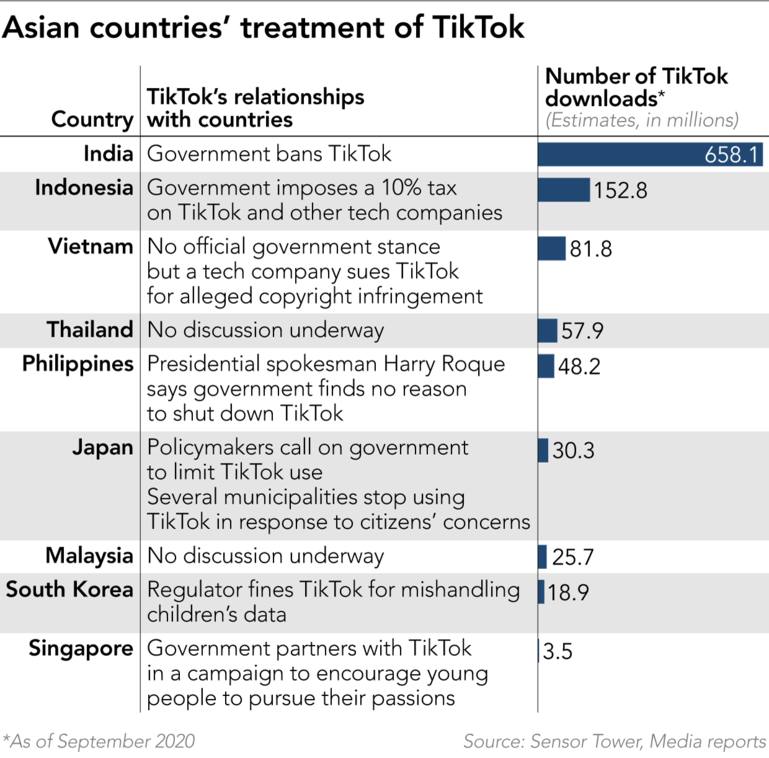 Taiwan has banned government agencies from using TikTok and other Chinese video apps, but for now seems content to leave it at that.

Indonesia's approach is unique in that it allows TikTok to operate in the country so long as it pays local taxes. In early August, the country added TikTok, along with U.S. tech giants like Amazon and Netflix, to a list of foreign companies that will be required to pay a 10% tax on sales to Indonesian customers. The government aims to raise revenue to help its pandemic-hit economy.

On top of national regulations, TikTok is also facing various lawsuits. In Vietnam, a technology firm has sued TikTok for using audio tracks owned by the company's subsidiary without the company's consent.

In Thailand and Malaysia, there has been little sign of a policy response to TikTok. Thailand seems more concerned about U.S. social media platform Facebook, and how it dealt with a private group critical of Thailand's monarchy.

ByteDance's own careful effort to expand globally has helped it avoid a crackdown in many places. It has separated TikTok from its domestic version, Douyin, and its Toutiao news app. "ByteDance has avoided emphasizing its ties to China so as to expand its business globally," said Asei Ito, an associate professor at the University of Tokyo. 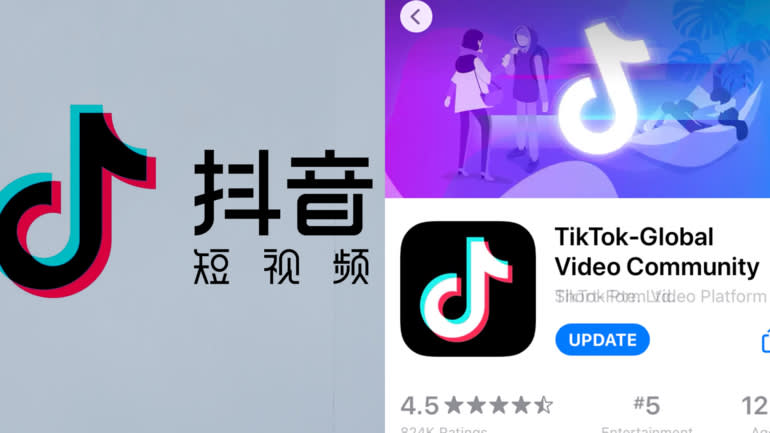 ByteDance has expanded abroad, taking care to separate TikTok from the Chinese version of its short video-sharing app, Douyin. (Source photos by Reuters)

The company has hired international executives to run its overseas business, including its recently resigned CEO, Kevin Mayer, who previously worked for Disney. It has also used local celebrities and influencers to promote the app in local markets.

The effort to disguise -- or at least not draw attention to -- the company's Chinese roots has been successful in some places. "I didn't know TikTok is from China," said a 16-year-old high school student in Japan. Despite concerns over security in the country, 89% of high school girls in Tokyo -- TikTok's main users in the country -- are against a ban, according to marketing research company Ing.

Unlike Douyin, which is subject to China's National Intelligence Law that gives the Communist Party sweeping powers to mine company data, TikTok insists the company will not allow the party access to its data. On Aug. 24, TikTok filed suit against the U.S. government, arguing that it has taken "extraordinary measures" to protect the privacy and security of TikTok's U.S. user data.

The company's recent retreat from Hong Kong is widely seen as an effort to evade Chinese authorities' demand that it censor content or share user data. This again highlights TikTok's desire to protect its brand as an independent, global social media platform. 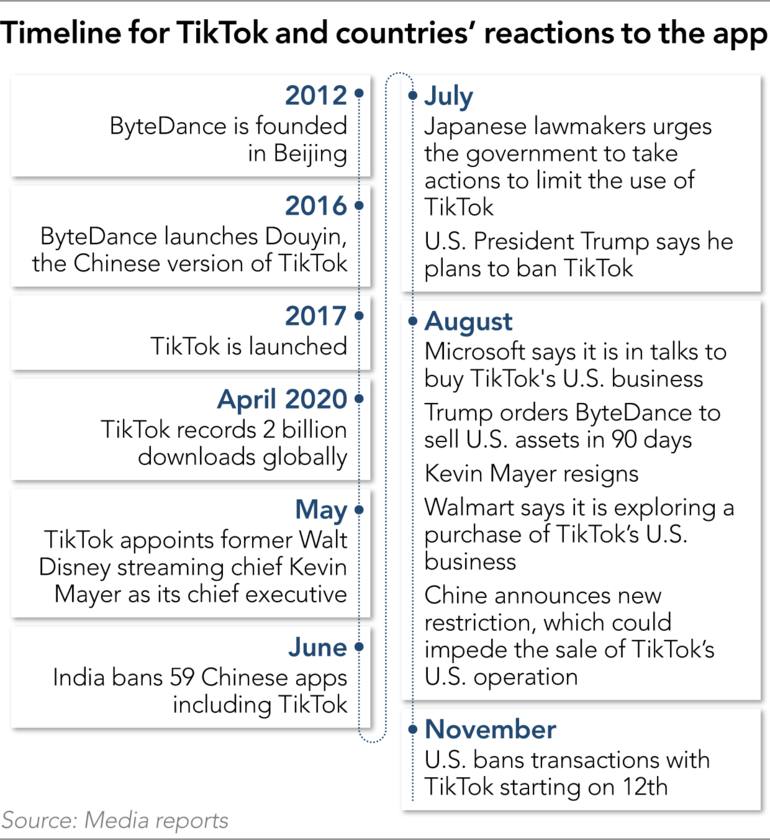 For now, ByteDance, unlike Huawei, has not been put on a US entity list. The list, in effect, bars those on it from sourcing technology or products from U.S. companies. As a hardware maker and network operator, Huawei could pose a direct threat to U.S. security if it controlled vital pieces of infrastructure such as telecom networks and cables. But if TikTok is placed on the entity list, its app would be banned from Apple and Android's app stores, causing it to lose new customers.

CB Insights estimates ByteDance is worth more than $75 billion, one of the world's fast-growing unicorns -- as privately held companies valued at $1 billion or more are called. But rising global concerns about TikTok being used as a propaganda tool have cast a shadow over its global ambitions.

President Xi Jinping sees TikTok as an asset that can "tell China's story well," and he views social media tool for influencing the world views China, said Kohei Watanabe, a professor of communications at Hokkaido University. Watanabe said social media like TikTok have become "a battlefield in the propaganda war," as tensions between the U.S. and China rise.

In India, TikTok was reported to have ordered its India team to censor content critical of the Chinese government, including all mentions of Tibet and its spiritual leader, the Dalai Lama.

Chinese leaders have long sought to increase the country's cultural influence. In 2018, Xi Jinping said: "We should improve our international communication capabilities ... and raise the country's soft power." For China, TikTok has become a model for how soft power can reach billions of people around the world.

Despite the effort to downplay its ties to China and adopt an apolitical stance, TikTok finds itself at the center of growing struggle between US and China, with American companies trying to purchase ByteDance's local unit and China seeking to block a sale by imposing new rules on the export of technologies, such as algorithms that the Chinese company has developed. 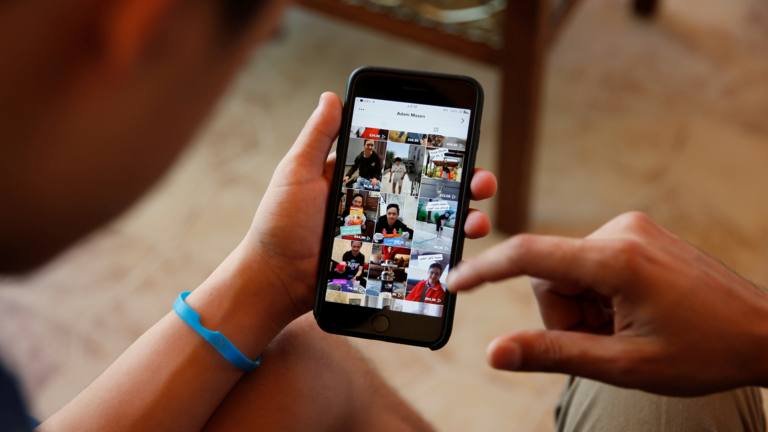 TikTok remains popular with young people around the world, but the growing economic conflict between Washington and Beijing has cast a shadow over its future.   © Reuters

President Donald Trump has pressed for a sale, while China is resisting it, calling it a "a blatant act of bullying." In mid-August, Chinese Foreign Ministry spokesperson Zhao Lijian said, "Without any solid evidence, some people in the U.S. have been abusing the concept of national security to suppress non-American enterprises. These U.S. moves are utterly disgraceful."

On Aug. 28, China announced new restrictions on exports of artificial intelligence technology, including text analysis, content recommendation, speech modeling and voice-recognition. Technologies on the list cannot be exported without a license from local commerce authorities.

Although China says the rules do not target specific companies, AI and data-analysis technologies owned by ByteDance could be subject to the new restrictions. China's state news agency Xinhua said in late August that ByteDance should examine the new rules and carefully consider whether to halt talks on the sale of its U.S. unit.

"Even though ByteDance is a private company, it is very difficult for the company to stay 100% apolitical, and this puts the company in a dilemma as it will have less chance for further global expansion," said Hokkaido University's Watanabe. "ByteDance will have no choice but to accept it and seek any possible growth [despite] the dilemma."

Ito of the University of Tokyo agrees, saying the TikTok ban may offer other global companies from China a harsh lesson: "If they succeed overseas, they will be eliminated."

"TikTok is at mercy of a battle between the two superpowers and there's nothing the company can do to resist it," said Ito. "Ultimately, this could change Chinese companies' growth strategy. And their global ambitions will be further challenged."