At Bilibili World 2020 participants dress up as figures from animations, comics and games. The video streaming site has tried to create a loyal community of fans.   © AP
Business Spotlight

HONG KONG -- Bilibili, an online streaming site best known as "China's Youtube," charges 168 yuan ($26) for an annual subscription to its premium content. For Cindy Sun -- who spent almost a quarter of last year watching videos on Bilibili -- that is a small price to pay.

In a country where people do not have direct access to Netflix, Hulu and Disney, and the so-called Great Firewall blocks many foreign websites, Bilibili was how the 28-year-old English teacher got her fill of content, from old detective movies to cartoons and video game livestreaming.

From videos created by fellow users, she learned drawing skills and picked up teaching tips. According to her viewing records, Sun spent 2,014 hours watching 8,481 videos on Bilibili last year.

"I am very attached to Bilibili, because I like high-quality long videos," said Sun -- who has paid for three years of membership up front. Most of the creators she likes only publish their work on Bilibili, she said.

Bilibili's ability to command such loyalty from views and publishers has wowed investors on Wall Street, with the price of its Nasdaq-listed shares quadrupling over the past year. Now the video-streaming company, which counts Alibaba Group Holding, Sony and Tencent Holdings as investors, is testing appetites in Hong Kong, raising $2.6 billion in a secondary listing.

It is one of a string of such migrations by U.S.-listed Chinese tech companies amid political tensions between the two countries.

As Bilibili grows -- it plans to use half of the proceeds to expand and improve its content -- so do its ambitions.

The site, which in its early days was a hub for fans of animation, now positions itself an all-encompassing video empire in the increasingly fierce competition for Chinese viewers.

"We have entered a new era where video is becoming the dominant vertical for people to get connected, informed and entertained," Chen Rui, Bilibili's chairman and biggest shareholder, said during an investor call in February. "We believe every Internet user could potentially become a video user, and this is creating a massive market opportunity for us."

But Bilibili still needs to show it can grow to take on bigger, richer, more mainstream rivals while retaining the loyalty of its original user base, a loyalty encouraged by its multiple-choice "exam" that those wanting to become "official members" must pass to unlock favorite features.

"One of the biggest risks for Bilibili is the intensified competition," said Zhao Zeping, an analyst at ICBC International. "A person only has limited time each day."

Bilibili was founded in 2009 by Xu Yi, a 20-year-old university graduate in HangZhou, as a platform for himself and fellow animation lovers to share foreign cartoon content. Named after a female Japanese cartoon character, Bilibili became popular among lovers of anime, comics and games. Like YouTube, it also provided a platform for individual creators to share their work.

But for many years Bilibili remained relatively little known to broader internet users and advertisers. Whereas more mainstream video sites such as Tencent Video and Youku, backed by Alibaba, relied on licensed TV series, movies and variety shows to boost viewer numbers, 91% of Bilibili's views were generated from videos uploaded by individual users.

Even when it started trading on Nasdaq in 2018, Bilibili's valuation was only a quarter that of Baidu-backed video sharing platform IQIYI.

But over the past two years Bilibili has been rapidly diversifying its content beyond animation and games. In the fourth quarter last year, lifestyle, entertainment, tech and knowledge were among its fast-growing categories. The number of its monthly active users rose 55% to 202 million in 2020. "What Bilibili is creating is a video ecosystem to satisfy the different demands of users in different life stages," said Carlton Lai, an analyst at Daiwa Capital Markets.

The pioneers of Bilibili's diversification remain its 1.9 million vibrant amateur content creators, like those on YouTube. Every month, they upload millions of carefully prepared and edited videos -- usually at least 1 minute long, something that distinguishes Bilibili from the likes of Chinese rivals such as ByteDance, whose international TikTok and domestic Douyin platforms rely on shorter clips.

"I always come back to Bilibili for the updates of content creators I like," said Zhang Haonan, a 24-year-old worker for an online education startup in Beijing. Bilibili helped him to nurture an interest in making videos, and he now leads his company's short-video department.

Wei Xiaobo, a dermatologist in Beijing, is typical of Bilibili's popular video creators. The 28-year-old started posting videos on Bilibili last year when his hospital department became less busy during the pandemic. The enthusiasm for one video about how people should wash their face properly prompted him to keep creating new videos. Within a year, he accumulated over 890,000 fans and his videos were played over 22 million times.

"The experience made me very satisfied as a doctor. I feel my personal value was reflected," Wei said, after reading many grateful comments from the viewers on his channel.

"The users at Bilibili are young and they tend to have a higher educational background. So I need to make sure all contents in the videos are precise and correct," he said of what is now a paid sideline.

Instead of working as an university researcher after getting his doctorate at the prestigious Chinese Academy of Sciences last year, Tang became a full-time creator for Bilibili.

"The general public still has a lot of misunderstanding about scientists. I want to build a bridge between the public and academia," Tang said. His passion for popularizing science through videos also earned him substantial financial returns, including rewards from Bilibili and commercial collaborations with brands.

Currently, Bilibili does not charge viewers for watching user-generated videos. But as the competition for attention intensifies Bilibili is beefing up its value-added content for paid subscribers.

During the past two years, Bilibili started producing its own drama series, variety shows, cartoons and livestreaming shows, as well as hosting events, including a New Year's Gala. The efforts helped more than double the number of its paid monthly users to 17.9 million over the past year.

In January, it also launched a short video function that competes directly with Douyin, and Kuaishou.

"One of the biggest appeals of Bilibili is that it has a diversified set of businesses that are synergistic, and also open up multiple future revenue streams," he said. Gaming contributed 40% of its revenue last year, down from more than 70% in 2018. Both advertising and value-added services revenue, mostly subscription fees, more than doubled in the fourth quarter from a year ago. 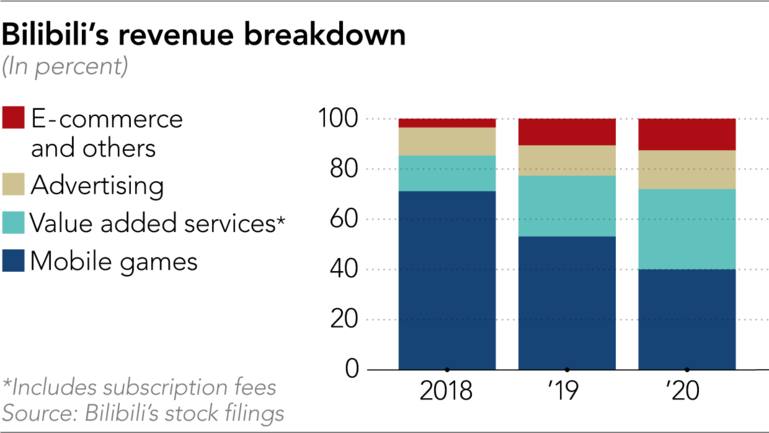 Despite Bilibili's efforts to broaden its user base, it still retains its community rules and culture.

Users must pass an exam of 100 multiple-choice questions to become "official members." That gives them access to its signature bullet chatting function, which allows viewers to share their thoughts and feelings with the audience viewing the same video. So far, around 103 million people have taken and passed the test -- 10 times the number of students who took China's nationwide university entrance examination in 2020.

Many users say the live, often amusing, comments create a community atmosphere and enhance their viewing experience. Nor does Bilibili display preloaded ads at the beginning of the videos for all users, forgoing a potentially sizeable revenue source for what it says is a better user experience.

Those elements have earned the loyalty of Bilibili's users. Its official members spent an average of 75 minutes every day on the platform last year, and over 80% are still active a year after they join, according to the company. That rate is far higher than its Chinese rivals', and even tops that of U.S. video streaming giant Netflix.

Despite its good reputation, Bilibili has challenges. As it grows and strays from what made it appeal to hard-core fans, it faces direct competition from other video platforms backed by deep-pocketed internet giants.

Both Douyin and Kuaishou want to lure popular Bilibili creators to their platforms and often pay more than Bilibili, according to several creators Nikkei Asia spoke to.

Zhao at ICBC International said advertisers are more willing to put resources into platforms with a larger user base. Douyin had 600 million daily active users and Kaishou had 300 million, as of last year.

"Bilibili's restrained approach to deploying advertisements means it has less room to exploit advertising commercially, compared with other short-video platforms," Zhao said. He believes Bilibili should focus on raising its social influence by continuing to offer more in-depth content, rather than sacrificing quality for profit. Pressure from the government is another concern. Zhang, the Beijing startup worker, is irritated by the growing number of propaganda videos posted by the Chinese authorities. The Communist Youth League, the Foreign Ministry and major state-owned media have all opened accounts on Bilibili. "The authorities clearly want to take advantage of the platform [for its ideological education of youth,]" Zhang said.

"I understand Bilibili needs to make some compromise to be able to survive. But if it went too far [in censoring video contents], I believe a lot of users would abandon the platform, he said."

Bilibili's quest for more mass-market acceptance is perhaps shown by the fact that its famous multiple-choice questions have become simpler -- allowing more people joining its club. Whereas earlier exams might have asked users to identify the nickname of a particular anime character, Bilibili now lets users answer questions in selected areas that they are familiar with. Scoring over 60 out 100 is a passing grade.

Sun, the Shenzhen teacher, is one of those longtime Bilibili users who worry that its move to the mainstream and effort to attract more users will harm its community atmosphere. "I hope Bilibili would be more like YouTube, rather than becoming another Douyin or Kuaishou," said Sun, who values Bilibili's unique content. "I hope Bilibili does not have to sacrifice its taste and cater to the demands of the mass market."