Singapore Airlines and other Asian carriers have been hit hard by tough travel restrictions in the region.   © Reuters
Business Spotlight

SINGAPORE -- Asia's airlines are struggling to emerge from the COVID-19 pandemic, with the biggest operators reporting significant losses -- again -- for the July-September quarter, reflecting the region's prolonged travel curbs.

Nearly two years since the onset of the pandemic, Western countries now lead the world's recovery from the crisis, with major U.S. airlines logging net profits in the quarter. But in Asia, strict safety measures to limit the spread of the delta variant continued to curtail demand for domestic and international travel in core markets, from China to Japan to Southeast Asia. Airlines are streamlining their operations, hoping to speed the return to profit if recent reopening moves by local governments unleash pent-up demand.

On Thursday, Singapore Airlines reported a net loss of 428 million Singapore dollars ($316 million) for the three months through September, marking the seventh consecutive quarterly loss. Its operational passenger capacity was 32% of pre-pandemic levels as of September.

The city-state's flagship carrier does not have domestic routes so its earnings most heavily reflect the weak cross-border travel in Asia, which is generally seen as more risk-averse than the West. The losses were "mainly due to the combined effects of the sporadic outbreak of the COVID-19 pandemic, the rising aviation fuel price and the fluctuation in [the] exchange rate," Air China noted in its filing. In comparison, the three airlines all marked net profits in the same quarter in 2019.

Similarly, Japan's two major carriers, ANA Holdings and Japan Airlines, were hit hard by the prolonged coronavirus state of emergency and weak international demand stemming partly from strict border controls by the Japanese government. As a result, they posted net losses of 47.6 billion yen ($420 million) and 47 billion yen for the July-September quarter, respectively.

On the day of the quarterly earnings announcement, ANA downgraded its earnings guidance for the current fiscal year ending March 2022 to a net loss of 100 billion yen, from a net profit of 3.5 billion yen, underscoring that recovery may not be as smooth as anticipated.

"Demand across Asian markets does indeed remain significantly lower than in 2019, largely as a consequence of international travel restrictions both to and from China and also intercontinental," said Rob Morris, global head of consultancy at Ascend by Cirium, an aviation analytics company. "Some domestic markets are recovering, but intra-Asian capacity typically remains more than 60% lower than in 2019, reflecting weak demand."

In contrast, the biggest carriers in the U.S. -- Delta Air Lines, United Airlines and American Airlines -- all reported net profits for the July-September quarter, with their revenue recovering to around 70% of levels in the same quarter two years earlier, thanks to robust domestic demand. It was the first time since the October-December quarter in 2019 that all three reported net profits. In contrast to their Asian peers, the biggest U.S. airlines all reported net profits for the July-September quarter thanks to robust domestic demand.    © AP

Morris noted that the U.S. airlines' earnings are "being underpinned both by financial support from the U.S. government but also by their domestic markets which have returned to similar volumes to 2019." Thus, "they have been able to rebuild networks and revenues to deliver the current financial performance," he said.

Since the pandemic started, Asia's aviation industry has been severely affected, prompting individual airlines to undergo significant cost-cutting measures, including layoffs and unpaid leave for staff and write-offs of older planes, while seeking funding from lenders and governments.

Many of them also ramped up their cargo business to capture rising global shipping demand for medical supplies and electronics components, giving at least some relief. For example, South Korea's flagship carrier Korean Air Lines logged a net profit in April-June, thanks to high freighter demand.

Elsewhere, Malaysia's budget carrier AirAsia is diversifying into digital services, launching food delivery and e-payment in some markets, while shutting down its airline business in Japan.

Yet, some emerging economies' flagship carriers that had already been in weaker financial positions since before the pandemic could not survive the crisis on their own. Thai Airways International is currently under court-supervised rehabilitation, while Philippines Airlines in September filed for bankruptcy protection in the U.S. Malaysia's budget carrier AirAsia is diversifying into digital services, launching food delivery and e-payment in some markets, while shutting down its airline business in Japan. (Photo courtesy of AirAsia)

As the year-end holiday season nears, Asia's airlines are finally seeing hope on the horizon. Over the past weeks, governments have started to ease domestic restrictions and border control measures as their vaccination rates increase.

Singapore in September launched what it calls a "vaccinated travel lane," which allows travelers to enter the country without quarantine, expanding the program to 12 partner countries by early November. Thailand this month started allowing quarantine-free entry for travelers from 63 countries and territories, including most of Asia's major economies.

"The opening of some markets can thus only be a welcome development for airlines in Asia who will be able to start to rebuild their networks and revenues in a similar manner to those U.S. airlines who have benefited from a largely reopened domestic and some international markets," said Morris.

Singapore's quarantine-free travel arrangement will "support the safe and gradual recovery of Changi Airport as a major air hub," Singapore Airlines said in the earnings statement on Thursday, adding that its operational passenger capacity is expected to increase to 43% of pre-pandemic levels by December. 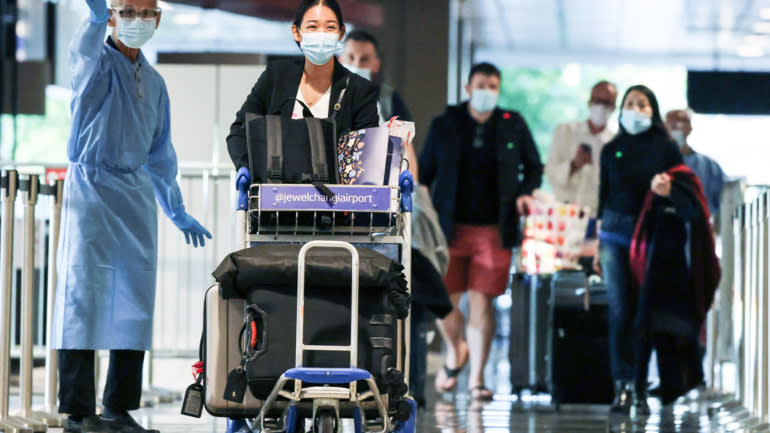 Stock prices reflect investors' expectations for border reopening. ANA and JAL rose 4% and 5% on Monday, respectively, as the Japanese government on that day reopened the border to business travelers and students. Singapore Airlines' shares climbed 8% on Oct. 11, after the government announced an expansion of the quarantine-free travel scheme to several countries, including the U.K., the U.S. and Canada.

"We are seeing an improvement in the fourth quarter in Asia-Pacific. Domestic traffic is picking up again, and we are finally starting to see the first signs of international travel returning," said Brendan Sobie, an independent aviation analyst.

"But it's very slow and gradual," he noted. "Some certainly positive developments recently, which is encouraging, but Asia will continue to lag the rest of the world for some time."

When it comes to their performance in the stock market, most Asian airlines' shares remain below January 2020 levels, with some exceptions such as Korean Air, which gained from steady cargo business. Looking ahead, one concern for the industry is the recent surge in oil prices, which drives up jet fuel costs. So far, the relatively lower operational capacity means the impact has remained less significant. But as they fly more planes, higher fuel costs could pose a greater threat to carrier earnings.

Against that backdrop, airlines are trying to streamline their operations to return to profitability. For example, JAL said it plans to reduce the group's total employees by 2,500 to 33,500 by the end of fiscal 2023 via a combination of attrition and cutting back on new hires. ANA also aims to slash about 9,000 staff by the end of fiscal 2025, from about 38,000 in fiscal 2020.

But, during its earnings news conference, ANA Holdings CEO Shinya Katanozaka called on the Japanese government to fully lift mandatory quarantine for business travelers and utilize a digital vaccination certificate -- a key tool that could help boost economic activity.

Between regions, more coordinated policy support could also be crucial for Asian airlines' recovery. Henk Ombelet, head of advisory operations at Ascend by Cirium, said the experience in Europe shows that travel demand will surge when governments put simplified multinational rules into place for overseas travel. "Perhaps this is an approach that might work in Asia, where until now there is a patchwork of different national rules and regulations, and this might help Asian airlines in their recovery."

Additional reporting by Nana Shibata in Tokyo and CK Tan in Shanghai.