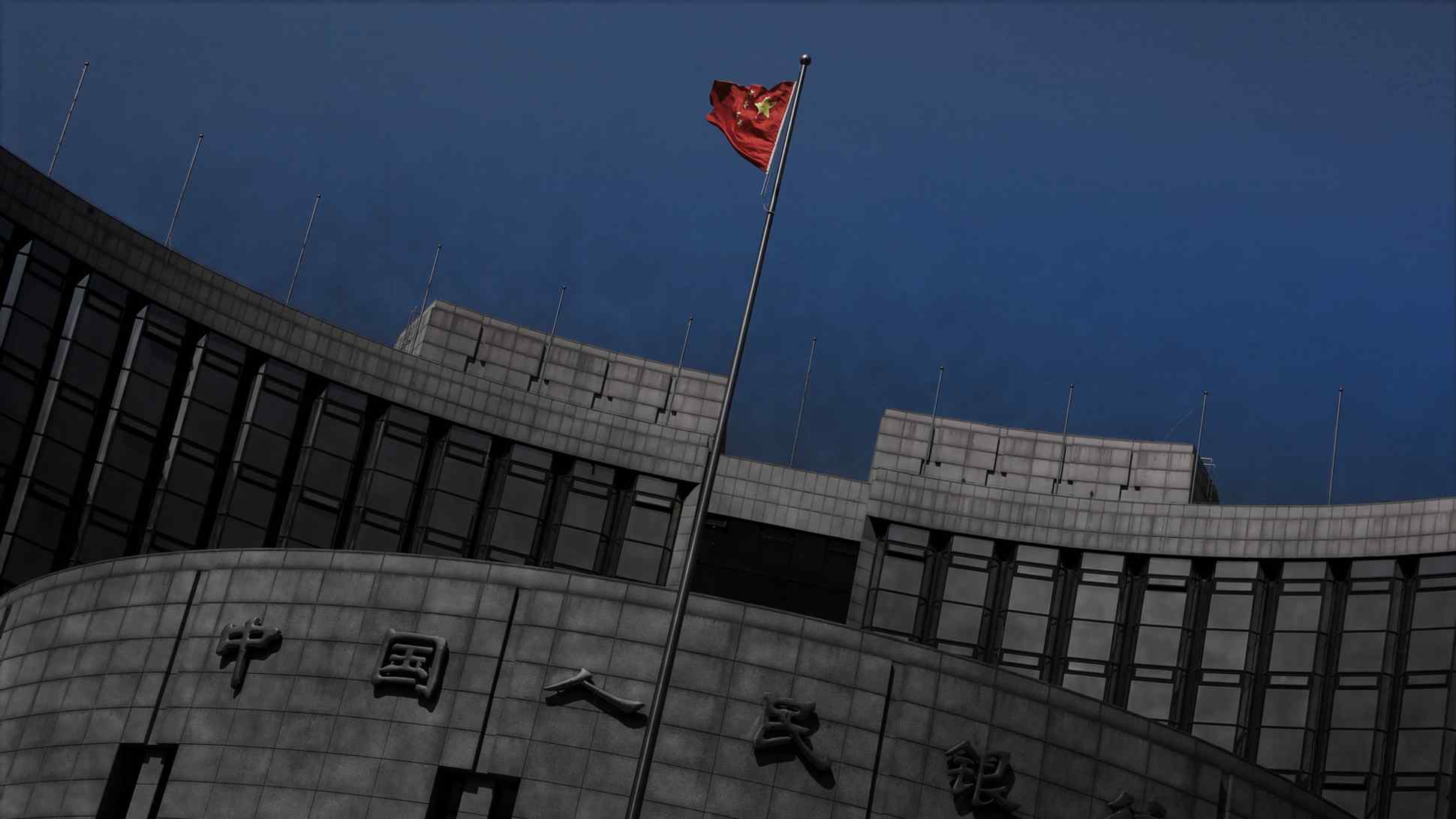 The People's Bank of China, in Beijing. The phase one trade deal with Washington paves the way for U.S. financial services companies to apply for asset management company licenses that puts them on par with their Chinese peers when it comes to buying distressed debt. (Source photo by Reuters)
Business Spotlight

HONG KONG -- Over the past six months, executives at Hong Kong-based investment firm SC Lowy have been inundated with calls from bankers in China hoping to sell them distressed debt.

That is a first in the 11 years since the $2 billion firm was established and underscores how China, after spending two decades trying to clean up bad debt by itself, is finally warming up to foreign capital.

The recent phase one trade agreement with Washington paves the way for U.S. financial services companies to apply for asset management licenses that put them on par with their Chinese peers when it comes to buying distressed debt.

Once an asset management license is granted, U.S. institutions can directly buy nonperforming loan portfolios from banks and bypass the Chinese companies that currently act as middlemen.

Warnings are galore, too, with critics such as Republican U.S. Senator Marco Rubio of Florida urging caution when it comes to buying soured Chinese loans.

"A majority of Chinese nonperforming loans go to state-owned enterprises," Rubio wrote last month in an opinion piece for The New York Times. "In the past, when a Chinese bank struggled with financing nonperforming loans on its books, Beijing had to bail it out with Chinese money. But now, under this accord, American savings can do it."

PricewaterhouseCoopers estimates China's nonperforming loans and other stressed assets at $1.5 trillion as at the end of 2019 and says the figure has yet to peak.

Foreign players such as Oaktree Capital Management, Lone Star Funds, Goldman Sachs, Bain Capital, PAG and CarVal Investors have already moved into the market, and others such as Nomura Holdings and Deutsche Bank see it as an opportunity.

Savills Research in a note said that purchase of bad-loan portfolios by foreign players nearly tripled in 2018 to 30 billion yuan from the previous year. That could increase further if investors get clarity on collateral management, pricing and legal recourse, analysts say.

"The local liquidity in China is clearly drying up," said Soo Cheon Lee, SC Lowy's chief investment officer. "Over the last six months, we've received an increasing number of inquiries from brokers based in the mainland seeking our investment in distressed debt. This is a marked change for a market which over the past few years has tried to tackle the bad-debts challenge locally," he said.

That approach has only delayed and multiplied the problem. Banks powered much of the economic expansion over the past few years, and regulators ignored loose lending as banks used the growth in loans to keep headline numbers in line with levels prescribed by regulators. But with a slowdown well underway, the challenges are fanning out.

For the first time in two decades, authorities last year had to intervene and bail out lenders, with Baoshang Bank, Bank of Jinzhou and Hengfeng Bank all needing help. 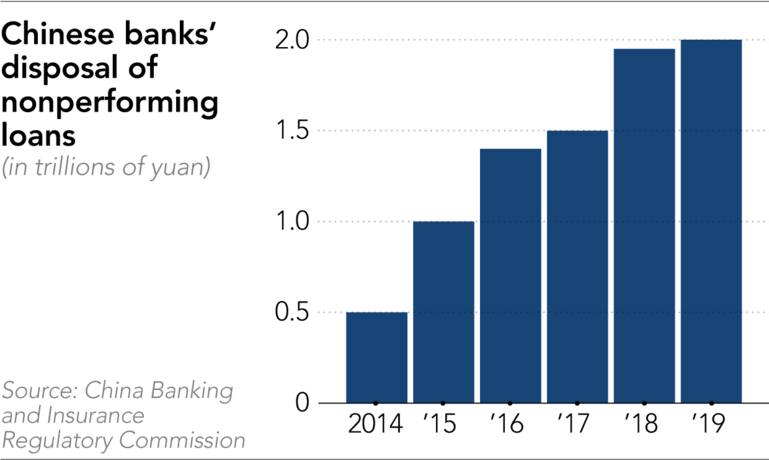 To compound the situation, Chinese financial institutions established over the past 20 years -- primarily with state support to relieve the pressure on banks -- simply do not have the capacity to keep a lid on bad debts.

As banks two decades ago were struggling under the weight of bad debts that stood at a fifth of all loans, China set up asset management companies in 1999 to swallow up toxic assets from banks.

What started as four centrally controlled asset management companies, or AMCs, back then has now mushroomed to 60. Most of those were set up post-2015, after the big four struggled to take on the bad-debt explosion from the five-year debt binge that Beijing relied on to stimulate the economy.

Now, not even 60 are enough, and Chinese financial media reported in late December that authorities were setting up another national asset management company. But economists and analysts who have watched the bad debt scenario unravel over the past decade are not convinced that is the answer.

"Opening a new AMC brings in capacity to the market at a time when NPL generation is surging and banks need to get rid of them," Sean Hung, senior analyst at Moody's, said. "However, a new firm will lack the 20-year expertise and data the big four have garnered. That takes time to build up."

A hedge fund analyst who monitors China's banking sector said: "It's just not that the banks are saddled with bad debt -- the distressed debt market by itself is in duress."

"I put a high probability of one or more countrywide AMCs -- either new ones or national status -- to be awarded to regional players," the analyst said. "Still, that won't be enough, and we need offshore funds to play a bigger role."

Despite mounting bad debts, the rate of loan disposal by banks slowed last year, yet another indication of their inability to keep up the pace. They offloaded 2 trillion yuan ($286.8 billion) in soured assets in 2019, only a slight increase from a year earlier and compared with 1.4 trillion yuan in 2017, according to regulatory data. The asset management companies branched out into banking, leasing, securities, futures, trust services, insurance and shadow banking to boost their income, but that has caused trouble.

The expansion into shadow lending and other investments has meant the big four are "facing their own bad debt issues, while also being exceptionally overleveraged with an asset-to-equity ratio of more than 900%," the hedge fund analyst said. "They are thus incapable of buying large pools of bank [nonperforming loans, or NPLs]. That kind of ratio is fine for a bank, but NPLs and excessive leverage go together like orange juice and toothpaste."

What is more, the nonperforming loans they bought over the past two years are largely from stressed regional lenders. Such loans and the investment products are "highly illiquid" and generally take two to three years to generate a cash flow. As such, there are questions over whether their 5 trillion yuan balance sheets can meaningfully take on a bigger pile this year, the analyst said.

Chinese commercial banks held a total of 2.37 trillion yuan of nonperforming loans as of September 2019, according to the China Banking and Insurance Regulatory Commission, up from 2 trillion yuan nine months earlier.

Special-mention loans, or lending potentially at risk of becoming nonperforming, totaled 3.8 trillion yuan in September, up from 3.4 trillion yuan at the end of 2018. Nonperforming-loan ratios for commercial banks ranged between 0.83% for foreign banks to 4% for rural banks. However, that is just the headline data, with the devil in the details.

Chinese commercial banks typically classify loans into normal, special-mention, substandard, doubtful and loss, and economists estimate the declared soured loan ratio is not reflective of reality. On an internationally comparable basis, analysts estimate the measure could be 6% on a conservative basis, with some putting the marker back at the 1997 high of 20%.

"To put that in context, that [levels of over 6%] is comparable with NPLs the European banks were nursing post the European sovereign crisis in 2014," Alicia Garcia Herrero, chief Asia-Pacific economist at Natixis in Hong Kong, said. "So that number is not small, and with the economy slowing, it will be a challenge to absorb more NPLs and maintain bad debt ratios."

Chinese banks are not as resilient as the numbers suggest, and some will require "sizable" recapitalization, S&P said in its report. Its findings were based on an analysis of stress tests carried out last year by the People's Bank of China on 30 of the country's largest banks, each with assets of at least 800 billion yuan.

S&P said China's nonperforming loans remain highly sensitive to economic growth, even for sizable banks. As a result, the financial system remains vulnerable to a slowdown in China's economy, contagion and idiosyncratic risks, it said. 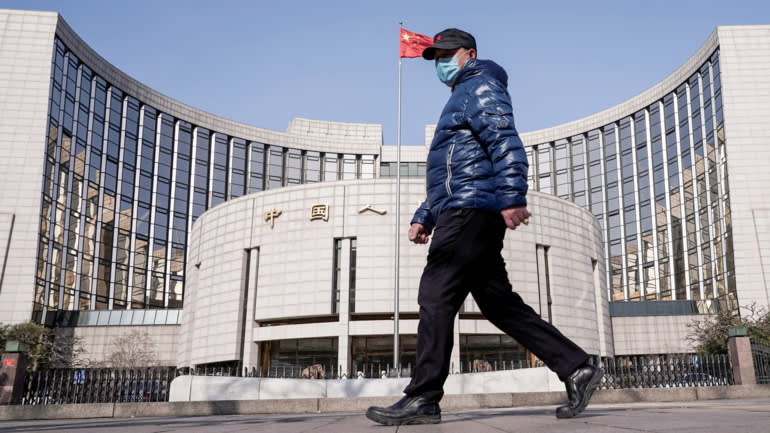 China's economic growth, which slowed to 6.1% in 2019, is expected to deteriorate further this year due partly to the coronavirus outbreak. Economists' mean estimate for 2020 is now 5.4%.   © Reuters

China's economic growth, which slowed to 6.1% in 2019, the weakest in nearly three decades, is likely to slip further. Economists expect further deterioration, partly due to the coronavirus outbreak, with economists' mean estimate now at 5.4% for this year. That sharper-than-expected slowdown could further boost nonperforming loans, analysts say.

Analysts estimate a new asset management company would be able to take up nonperforming loans that carry a face value of as much as 200 billion yuan in the first year. But that requires a generous capital infusion, with reserves set at a minimum of 8% to 9% of total assets.

That would not be enough to solve the problem. Authorities are aware of the magnitude of the challenge, and that is why they are opening up the market to Wall Street, analysts say.

SC Lowy says a market-driven resolution would be the answer, while Natixis says the size compared with 20 years ago when the asset management companies were first introduced means that a localized effort alone would not work.

Chinese commercial banks typically sell portfolios of bad loans to the state sponsored asset management companies. These companies then try to resolve the debt by working with creditors or reselling them to domestic and foreign investors of China's banking system. Faced with capacity constraints, this model is struggling to keep pace.

Sensing an opportunity, firms such as Bain Capital are setting up credit funds. Nomura Holdings over the past 24 months has steadily built up its China investment team to tap the markets.

So far, foreigners have focused on distressed debt backed by properties, including hotels, warehouses and other commercial or residential buildings. They buy loans at a 30% to 50% discount, with the aim of buying loans at deep discounts to the properties' market value, then making a return of as much as 20% by selling the real estate. The portfolio aspirations are now changing.

"After a long wait and several false starts over the years, banks and funds believe the time is now," an investment specialist at a global bank said. "Yields on all NPLs are attractive -- so is the risk, though. But it is time to move in as Chinese are also acknowledging they need the due diligence foreign capital applies."

The banker, who is active in the market, suggests partnering with local law firms and accountants to buy and monitor the portfolio. He also recommends buying one or two nonperforming loans first to understand all the challenges that come with it, explain the risk and return profile to investors before jumping in.

SC Lowy, for instance, plans to continue participating in the offshore market for Chinese debt instead of moving onshore for now.

"The entry of more foreign funds with rich experience should help with the [bad debts] resolution," Michelle Lam, the greater China economist at Societe Generale in Hong Kong, said.

"But foreign investors often face problems coming from legal, the collateral process, and its pricing. It is still early days, and more transparency and reform to facilitate the deal process will be needed to increase the attractiveness of the stressed loans."