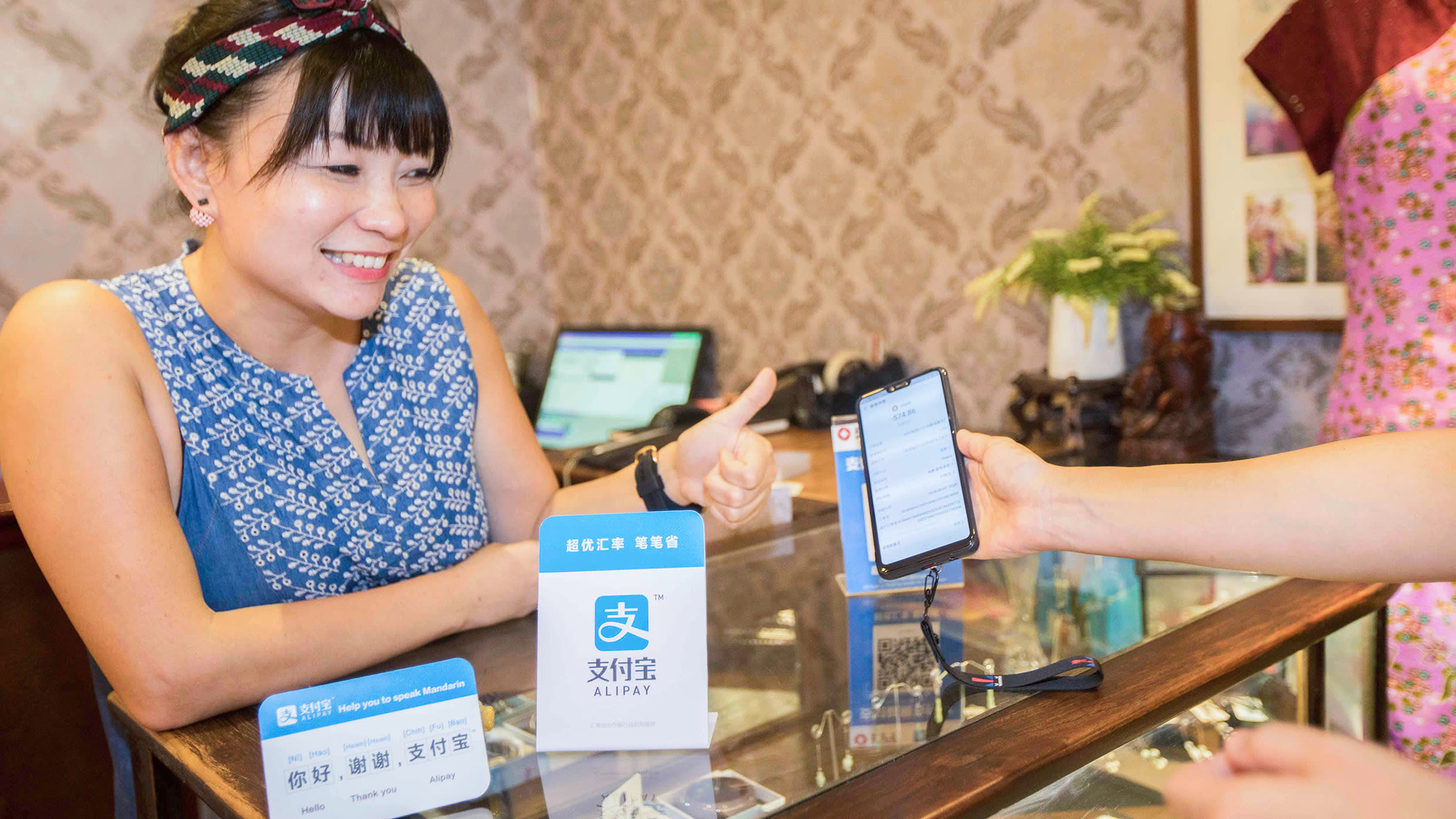 SINGAPORE -- These days restaurants, taxis and even vending machines in Singapore accept Chinese e-payment service Alipay -- despite the fact that few Singaporeans use it.

"We have Chinese customers, so we introduced it," one restaurant manager in the central business district told Nikkei Asian Review.

Alipay operator Ant Group -- the financial affiliate of Chinese e-commerce giant Alibaba Group Holding -- has been aggressively rolling out its mobile payment system in overseas markets, mainly to serve Chinese travelers. Alipay is currently accepted in over 200 countries and regions, according to the company.

With a massive public offering in the works, the company is ready to take its ambitions even further.

Ant aims to raise about $30 billion in a dual listing on the Hong Kong Stock Exchange and Shanghai's STAR Market. If successful, it would be the world's largest-ever IPO, and give Ant the firepower to pursue the other side of its growth strategy: investing heavily in Southeast Asia's e-payment players.

"We will continue to seek out opportunities overseas to enable merchants and consumers to conveniently receive and make payments and remit globally," Ant stated in a filing submitted to the Hong Kong exchange on Aug. 25, adding that the company will bring its "leading payment technology and risk management solutions" to its e-wallet partners.

But while Ant sees as a golden opportunity for growth outside of its own saturated home market, the stage is set for a cutthroat battle between local and global players for Southeast Asia's massive and rapidly growing e-payment and fintech markets.

In Southeast Asia, Ant has already invested in Thailand's Ascend Money, with its TrueMoney brand, Indonesia's Dana, and the Philippines' Mynt, under partnerships with major local companies. Most recently, in May, it announced an investment in Digital Money Myanmar, known as Wave Money, taking a 33% share.

When Ant invests in local players, it likes to highlight the benefits it brings to its new partners beyond cash, such as its technology and know-how. Ant has, for example, built up sophisticated credit-scoring capabilities in China.

The investment in Wave Money will "enable Wave to tap into the experience of Alipay to promote financial inclusion and better serve the unbanked and underbanked individuals and small and midsize enterprises in Myanmar," said Eric Jing, Ant's executive chairman. 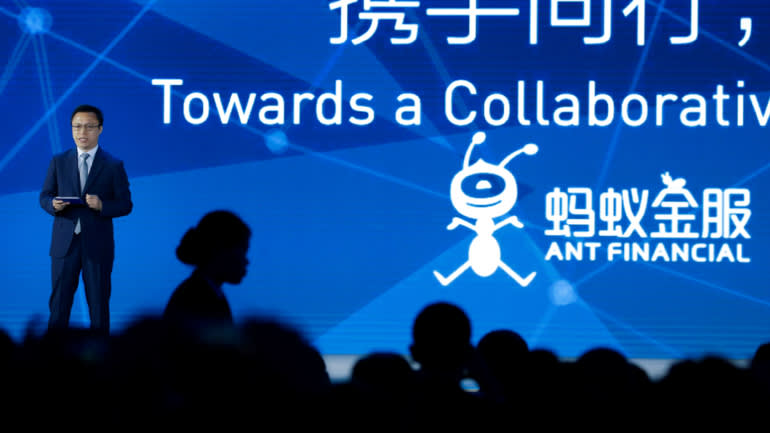 Ant's application for a digital banking license in Singapore, which was revealed in January, however, indicates that the company wants to bring its more sophisticated fintech offerings to Southeast Asia's financial hub.

Ant has applied for a "digital wholesale bank" license, which would allow it to serve only corporate customers. While Singapore has a highly developed and fiercely competitive financial market, Ant could aim to serve small and midsize businesses overlooked by traditional banks, thanks to its credit-scoring knowhow and its lower-cost model.

The Singapore market, moreover, would likely be just a first step for Ant. Having a digital banking license in the city-state would likely make it easier for the company to expand into other jurisdictions, as neighboring markets will be looking at how the financial hub regulates digital banks. And once Ant creates a business model in Singapore, it can more easily replicate it in other markets, such as Malaysia.

Other applicants for the Singapore licenses include ride-hailing unicorn Grab, which partnered with Singapore Telecommunications in a digital banking joint venture, and gaming hardware company Razer. Both companies have made no secret of their desire to expand their payment-related businesses in Singapore and elsewhere in the region.

Even though Ant has expanded its business in the region, the use of Alipay is largely restricted to Chinese residents, mostly tourists, due to local regulations. But if Ant can secure the required licenses, local merchants that have introduced Alipay could become customers for its digital banking business. 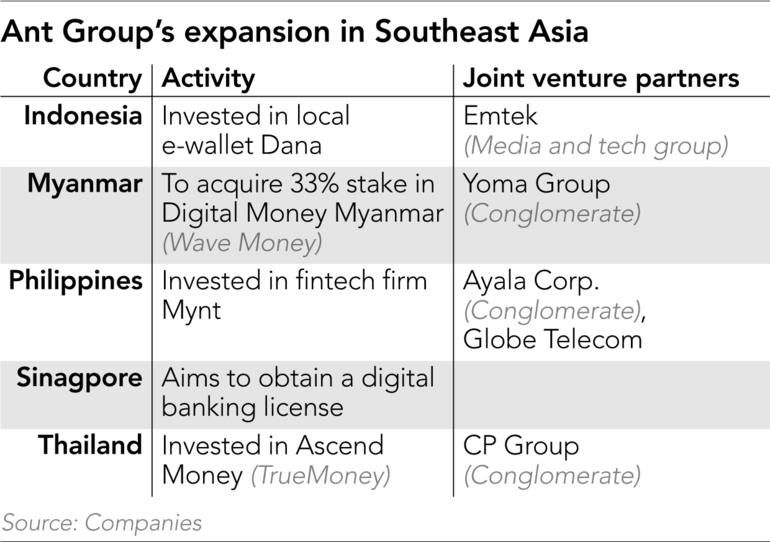 "The IPO will give them a lot of capital, which would allow them to make other acquisitions or move further into some overseas markets that they haven't deepened before," Zennon Kapron, director of Singapore-based financial research firm Kapronasia, told the Nikkei Asian Review.

Ant's total payment volume in China reached 118 trillion yuan ($17 trillion) in the year through June. Its net profit in the first half of 2020 surged to 21 billion yuan, compared to 1.3 billion yuan a year before, as the coronavirus pandemic drove demand for e-commerce and food delivery services.

Yet the number of active users in China reached 711 million in June, around half of the country's population, meaning that domestic market is largely saturated. Competition from WeChat Pay, operated by Alibaba rival Tencent Holdings, is further squeezing Alipay's prospects at home, making global expansion an imperative.

The latest back-and-forth follows a series of U.S. sanctions against Huawei Technologies, China's biggest smartphone maker and the world's No. 1 telecom equipment maker. Trump has hinted he is also considering taking action against other Chinese companies -- including Alibaba.

Developing markets, too, are hardening their stances against China. Ant has invested in Indian payment giant Paytm multiple times since 2015, but in late June this year, the Indian government banned Alibaba's browser, along with other 58 Chinese apps including TikTok, WeChat, and search engine titan Baidu's map service. India on Wednesday banned 118 more apps, including Alipay.

Ant noted such political risks in its IPO filing. "Geopolitical tensions have led to a worsening relationship between China and the U.S. and this adverse trend may continue to deteriorate, which could negatively affect our business and results of operations."

Chinese business has found a much warmer reception in Southeast Asia, with the Philippines, for example, recently saying it will continue doing business with companies blacklisted by the U.S. over the South China Sea dispute.

But while the geopolitical risks may be lower, Ant faces plenty of local competition in Southeast Asia.

Thanks to rapid digitalization and its large underbanked population, the region is already a battleground for fintech players. Leading local players include ride-hailing giant Grab of Singapore and its Indonesian rival Gojek, which offer the GrabPay and GoPay mobile wallet services, respectively. Indonesia's OVO and LinkAja, Thailand's Rabbit LINE Pay and Vietnam's Momo are just a few of the emerging challengers. Established banks, like Singapore's DBS Group Holdings, also have e-wallet apps.

In this saturated market, it is not unusual for one person to use multiple apps.

Jaka Firman, a 27-year-old Jakarta resident, uses GoPay, OVO and LinkAja for transportation, online and offline shopping, and paying his electricity bill. "I think 80% of my transactions are already based on e-wallets. I only need to withdraw money once a week for petty cash," he told Nikkei. He said he likes e-wallets because they make it easier to manage his spending. "Credit cards are not convenient for me because of the security issue," he added.

With e-wallets already ubiquitous in the capital, experts expect them to spread to rural areas, where access to traditional financial services is limited, triggering a battle for untapped markets.

Gross transaction value of e-wallets in Southeast Asia will increase to $114 billion in 2025 from $22 billion in 2019, according to estimates by Google, Temasek Holdings and Bain & Co. Consumer fintech services such as smartphone-based micro insurance, lending, and wealth management services are also expected to grow rapidly. The COVID-19 pandemic is further fueling demand for cashless transactions and will provide a boost for e-payments "in the mid- to long-term because a lot of merchants are moving away from cash to cashless," said Joel Neoh, CEO of Malaysia-based Fave, which provides QR code payment systems in Singapore, Malaysia and Indonesia. Neoh said his company saw demand for its solutions picking up from June.

But while Ant eyes opportunities in Southeast Asia, the region's homegrown giants are moving to secure their footholds. Grab said on Aug. 4 said it will soon launch a slew of app-based fintech services, including automated investment, consumer loans and health insurance, for GrabPay users.

Reuben Lai, senior managing director at Grab's financial unit, insists there is plenty of room yet for fintech to grow, telling reporters that its "real competitors" are traditional financial instruments, such as cash and informal lending channels

Global giants, however, are also starting to eye the fast-growing market. Alipay’s logo is seen on the screen of a taxi in Singapore, where the payment app is primarily used by Chinese visitors.   © AP

U.S. payment company Paypal with Facebook announced in June that it has invested in Gojek. The investment was made "with a focus on supporting payments and financial services in the region," according to the Indonesian company.

Tencent, which is already one Gojek's backers, is also seeking opportunities elsewhere in Southeast Asia. In Vietnam, the Chinese company has invested in one of the country's major e-payment firms, ZaloPay.

"While there are only a handful of players in [China and India], there are numerous providers in Southeast Asia," the Boston Consulting Group pointed out in a May report, noting that more than 40 e-payment licenses have been issued in Malaysia and in the Philippines.

"A number of independent players will probably be forced out of the business or acquired by larger, financially stronger rivals, or they may form partnerships with commercial banks," the consultancy said.

Kapronasia's Kapron shared a similar view. "There will be some inevitable consolidation in some of the markets as things progress. Companies that are not well funded will potentially struggle in terms of driving the value proposition and expanding in the market," he said.

Ant Financial's further overseas expansion, he added, will only add to such competition.

"Ant's ability to build out a financial services ecosystem is ... very powerful," Kapron said. "I think it will become more and more challenging [for smaller operators to survive] because in many of the markets we have already seen two to five players capture most of the market share."