Aiways U5 electric sport utility vehicles are now being sold in Europe, where the company is using livestreaming events to drum up interest.   © Getty Images
Business Spotlight

TOKYO/HONG KONG -- When it comes to smartphones and laptops, "Made in China'' is starting to lose its negative connotations for consumers in the West. Chinese automaker Aiways sees no reason why the same shouldn't apply to electric vehicles.

The Shanghai-based startup unveiled its latest model -- the all-electric U5 SUV -- for the French market in an online event last month.

"The design is very simple and uncluttered," one of the presenters said as she detailed the U5's design and capabilities. "The car is modern, and even the mode of distribution is modern."

"Modern" distribution here means replicating the "live commerce" experience of Aiways' home country -- using livestreaming events to drum up interest and sales online. The company ships its cars through local partners to customers in Europe from its factory in the eastern Chinese province of Jiangxi. Workers inspect a car at an Aiways factory in Shanghai: The company sees Europe as a promising market as competition at home grows fierce.   © Reuters

Alexander Klose, the Aiways executive vice president in charge of overseas operations, believes the rise of Chinese smartphones and laptops has helped convince the world that "there could also be some quality products coming out of China."

Aiways is not alone: A growing number of Chinese EV makers are setting their sights on overseas markets -- and they intend to compete on quality as much as price.

BYD, the Chinese automaker backed by U.S. investment guru Warren Buffett, is betting on Norway. It shipped its first 100 European-specification SUVs to dealers there this June, and it plans to deliver 1,500 by the end of the year. Like Aiways, BYD is keen to take advantage of overseas consumers' improving perception of Chinese products.

"We are not going to make the same mistakes as other Chinese brands did more than 10 years ago in the European theater. They tried to launch vehicles in a very cheap and rushed way, without being fully prepared," a BYD spokesperson told Nikkei Asia. "Most people haven't heard of BYD until now, so it is more important to do things right than [to] start talking about [sales volume]." 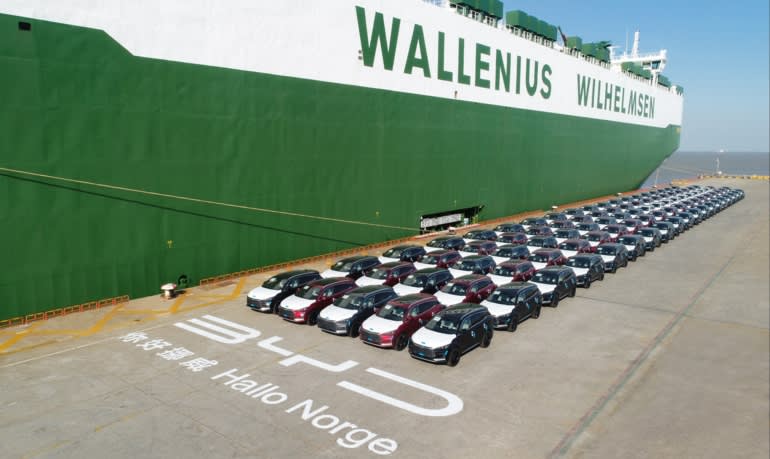 Other Chinese startups eyeing Europe include Nio. The U.S.-listed automaker plans to begin selling cars to Norwegians from September, in its first overseas push.

"Most of the Chinese brands are entering Norway because it has the friendliest laws for imports, and they're also offering the highest subsidies or incentives to their citizens," said Le Tu, managing director of Beijing-based Sino Auto Insights. Norway is the first country where EVs have topped 50% of new car sales.

Aiways, meanwhile, which is backed by Chinese ride-hailing titan Didi-Chuxing, found a partner in Italy last month, its sixth European market after France, Germany, the Netherlands, Belgium and Denmark. It also sells in Israel.

The overseas push by Chinese EV makers and startups comes as competition at home turns fierce. Tesla of the U.S. doubled its sales in China last year. And while the U.S. may be the second-biggest car market in the world, trade tensions and tariffs make it a difficult target for Chinese startups. 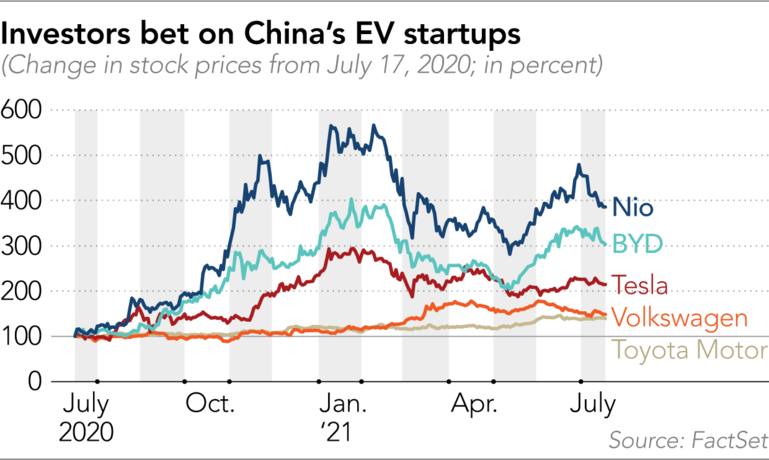 Last year, 23,800 Chinese EVs were sold in Western Europe, up 1,290% from the year before, according to a January report by Berlin-based Schmidt Automotive Research. Almost half those sales came in the fourth quarter alone. The total for the first five months of 2021 came to 13,000 -- a figure that might have been higher but for Beijing banning lithium-ion batteries from being transported by rail out of the country, according to Matthias Schmidt, founder of the research company.

In the first half of the year, the bestselling EVs in Europe were Tesla's Model 3, the ID.3 from Germany's Volkswagen and the Zoe, made by France's Renault, according to Schmidt Automotive Research. Sales of the Model 3 reached 66,000 during the period. No Chinese companies were in the top five.

For decades, competition in the auto industry hinged on heavy investment in engines, transmissions and complex powertrain systems, throwing up significant entry barriers for newcomers.

Electric cars, by comparison, have far fewer components and a simpler powertrain architecture that consists of batteries, electric motors and electronic control systems. That means it takes less time and money to build and design an electric car.

That, in turn, frees up resources to develop and apply cutting-edge technologies like autonomous driving, a particular strength of Chinese manufacturers, experts say. 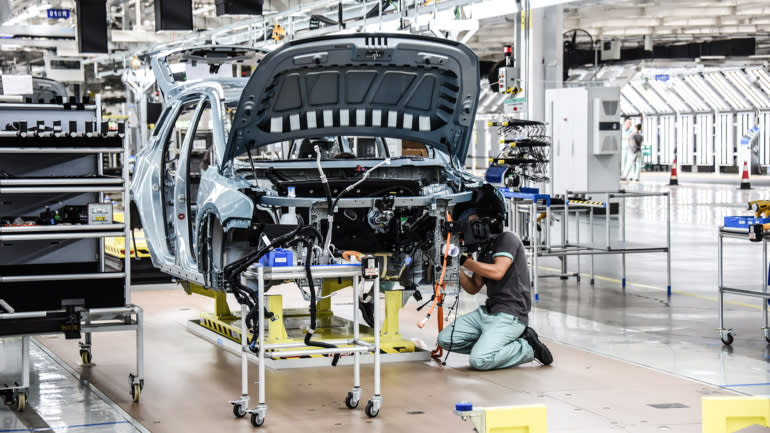 A worker assembles an Aiways U5 electric sport utility at a factory in China's Jiangxi Province.   © Getty Images

Sanshiro Fukao, senior fellow at Itochu Research Institute, says Chinese EV makers have been able to sell the concept of 'smart EVs.' "As seen from [smartphone maker] Xiaomi's interest in EVs, Chinese consumers have come to see EVs as a part of urban life, like home appliances," Fukao said. Chinese automakers at the Auto Shanghai show in April showcased dozens of new models, but what made them stand out, he said, was their stylish designs aimed at young women.

Klose from Aiways offered a similar assessment. "There is a tendency to associate Chinese EV brands with smart cars," he said. Electric models produced by traditional European manufacturers, by contrast, "still look like a reworked internal combustion engine vehicle, rather than a completely newly designed EV," he said 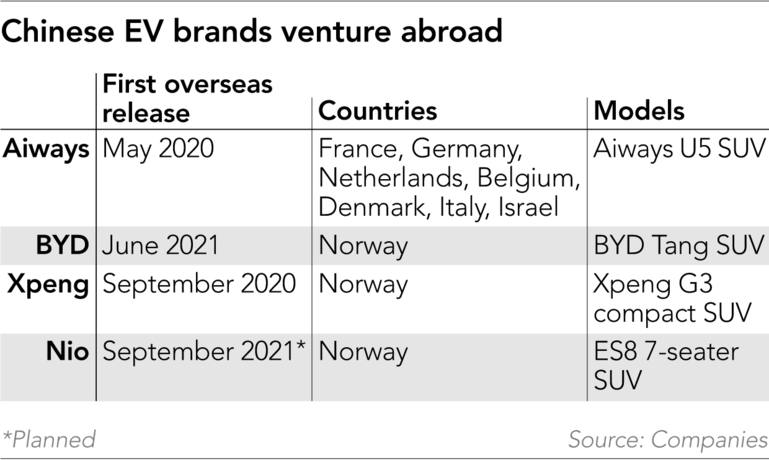 Japan, like Europe, presents opportunities for Chinese electric vehicle companies due to the relative lack of local competition, according to Fukao.

Even Mitsubishi Motors, which is set to launch one of the country's cheapest electric minicars in the next two years, is on the alert. "Chinese [companies] will be our rivals, going forward," President Takao Kato said.

Japan offers another possible entry point for China's EV challengers. The country's logistics companies are under increasing pressure from investors and customers to reduce their carbon footprint. Hiroyasu Iizuka, the founder and CEO of fabless EV startup ASF, teamed up with Sagawa Express to help the local delivery company electrify its fleet of compact trucks. But when it came time to find a manufacturer for his company's designs, no Japanese automaker was willing to take on the work.

Daihatsu Motor or Suzuki Motor, both known for their compact vans, have been hesitant to go electric, due to concerns that the range and charging time of EVs are incompatible with commercial use. 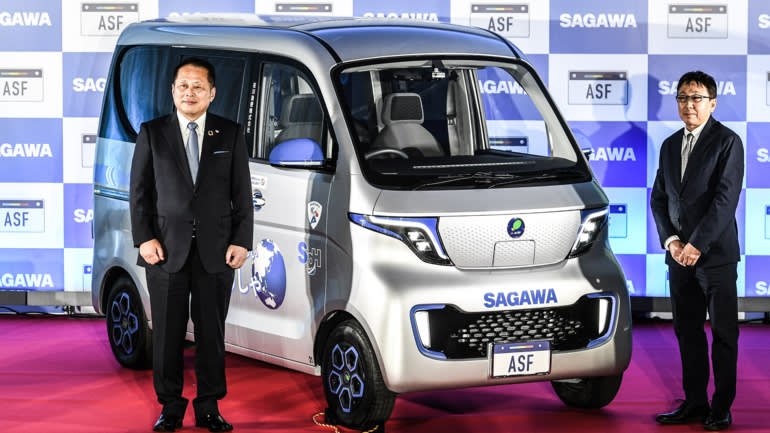 Courier Sagawa Express unveiled a prototype mini electric vehicle in April in Tokyo. The company has turned to a Chinese manufacturer to make the delivery vans. (Photo by Kosuke Imamura)

Iizuka believes Japanese car manufacturers are "looking down on customers. ... They should learn to respect more the needs arising from the market."

Unable to find a local partner, ASF instead chose China's Guangxi Automobile Group to produce its designs. "[The company] does exactly what we ask for, even providing some detailed information required by the land ministry in Japan, such as the battery specs and the nature of inspection. ... Their flexibility was very much appreciated," Iizuka said.

Guangxi Automobile will start-mass production of ASF trucks in September. Sagawa plans to replace all of its 7,200 compact vehicles with EVs versions by 2030.

Iizuka did not say how much ASF is paying Guangxi Automobile, but he implied it was a competitive rate. "Japanese manufacturers can't turn EVs into value at this price," he said.

But while the road ahead may look smooth for Chinese EV makers, the clock is ticking, especially in Europe.

"Once European brands launch more electric vehicles, then the market is going to be really competitive," Le said. "I believe the Chinese EV companies probably have 24 to 30 months to quickly educate customers, create awareness about the brands and the positioning before an onslaught of European brands launches into the market."

Schmidt Automotive Research's Schmidt agrees that the next few years will be crucial for Chinese EV makers in Europe. The European Commission introduced stricter carbon emission targets for vehicles last year, and plans to tighten them further in 2025. It recently proposed an effective ban on new gasoline- or diesel-powered cars from 2035. Domestic carmakers, Schmidt said, will be "happy to sit back and wait until the last minute" to comply with those new regulations and continue selling more profitable gasoline-powered cars for as long as they can.

But once these automakers are forced to introduce more EVs, the window for Chinese brands will begin to close, he said. "It gives Chinese OEMs [original equipment manufacturers] a three-year window of opportunity, which they have to exploit," he said.

Even as more Chinese brands enter the international market and traditional carmakers launch more EV models, Klose believes there is enough room for growth. "There's a lot of demand right now, and I think there are not enough cars to fulfill that demand," he said. "We are riding a wave, and that wave will continue for the next few years."