A Nissan Sylphy on show in Guangdong in 2017. The Sylphy is China's best-selling sedan -- a ranking dominated by Nissan and other foreign brands.   © AP
Business Spotlight

While the country's monthly auto sales have recovered to pre-pandemic levels and recorded double-digit year-on-year growth in October, Chinese consumers' preference for foreign brands over local ones is growing. The bestselling sedan models for September were all made by foreign auto companies, including Toyota, Nissan and Honda from Japan, Germany's Volkswagen and General Motors of the U.S.

For Chinese President Xi Jinping, there might be no better moment than now to support proprietary auto technology, for its considerable employment opportunities and its importance to China's tech rivalries with the U.S.

"In order to propel high-quality development of our nation's auto manufacturing, we must strengthen our own research and development capabilities on core technology and key components," Xi said, according to a report from government-operated broadcaster CCTV, when he visited the headquarters of state-owned automaker China FAW Group in the northeastern province of Jilin this past summer.

Xi stressed that it was important to "realize technological self-reliance and to make our national brand bigger and stronger." He also examined FAW's latest Hongqi auto models and other national brand cars, the Xinhua News Agency reported on the same trip.

For the country's leadership Hongqi, meaning red flag, is a proud symbol of a proprietary -- or non-foreign brand -- car made under the "new China."

"The Hongqi brand not only carries the national spirit, but it also has new technological elements and a quality guarantee," Xu Liuping, chairman of FAW Group, told Xinhua in an interview last month. 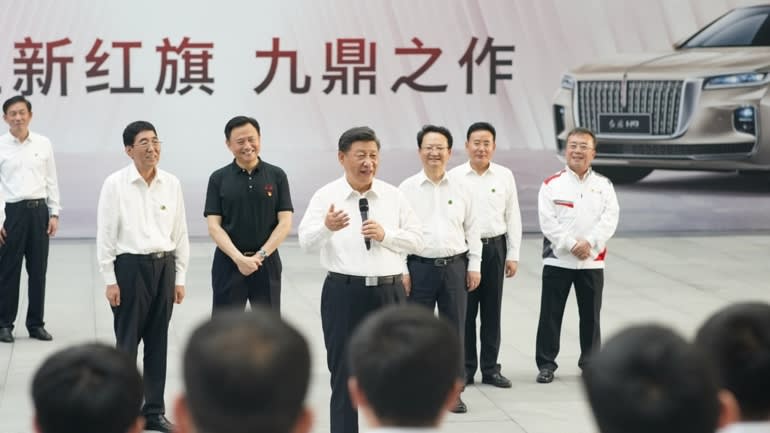 President Xi Jinping during a visit to FAW Group in Changchun in July. Xi said China's research and development capability needed to be strengthened.   © Xinhua/Kyodo

The Chinese government has long nurtured national brand cars. In a 1994 document laying out its first comprehensive auto sector strategy, Beijing set a target to create three to four auto conglomerates with "international competitiveness" by 2010, and they were expected to "join in the international competition by proprietary development, production, sales and expansion."

In 2009, China indeed became the global leader in terms of auto sales and production. But its homegrown brands -- which will be on show at the Guangzhou International Automobile Exhibition later this month -- remain uncompetitive.

The market share of Chinese national brand cars among all passenger autos sold in the country in 2009 was 44.3%, according to the China Association of Automobile Manufacturers. The figure inched up to 45.6% the following year, but that turned out to be the peak.

Sales of proprietary brand cars in the first ten months of this year fell 14.1% compared with a year earlier, pulling the market share down to 37.1%, meaning nearly two-thirds of new passenger vehicles sold are foreign brands -- mainly German, Japanese and American. Sales of the Hongqi doubled in the first nine months of this year, to 130,000 units, but that still is less than 1% of the overall market, according to Xinhua.

"In most markets, local brands tend to have majority share," Stephen Dyer, managing director at AlixPartners in Shanghai, told Nikkei Asia. Dyer said he expects that ultimately to be the case in China, but noted that the process will be "slow."

Ironically, joint ventures with foreign brands -- which major state-owned automakers rely on -- have held back the development of national brand cars. 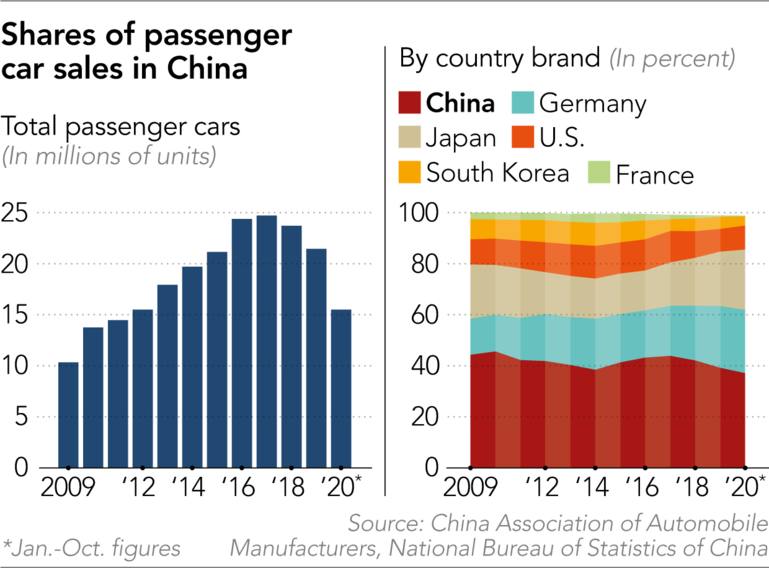 Take, for example, SAIC Motor, FAW Group's state-owned peer and China's largest automaker by manufacturing volume. In 2019, the Shanghai-listed automaker reported 25.603 billion yuan ($3.77 billion) in net profit, while its share of profits from joint ventures and affiliated companies stood at 23.016 billion yuan. The predominant portion of the latter came from joint ventures with Volkswagen and General Motors.

The reliance on foreign joint ventures is even more apparent for other state-owned automakers. For Dongfeng Motor Group and Guangzhou Automobile Group, both Hong Kong-listed, profits derived from their joint venture partners exceeded their bottom lines last year.

Foreign automakers in China for years had to team up with state-owned companies in order to manufacture cars in the country, with a 50% ownership cap. That changed in 2018, when the government began to allow foreign companies to acquire more than 50%.

Volkswagen raised its stake in its joint venture, JAC Volkswagen, to 75%, while BMW acquired stakes from its Hong Kong-listed partner, Brilliance China Automotive Holdings, to increase its holding in BMW Brilliance to 75%.

Brilliance has been embroiled in the financial turmoil of its state-owned parent Huachen Automotive Group Holding, which has defaulted on principal and interest of a 1-billion-yuan bond that matured on Oct. 23. Brilliance is the most valuable asset Huachen holds.

Brilliance is now "under pressure to solve its parent's debt crisis, which could be in the form of dividend payout or sale of shareholdings to the parent's creditor... which creates negative uncertainty for the company," Toliver Ma, an analyst at Guotai Junan Securities, said in a report.

China's joint venture policy "is a double-edged sword," Dyer noted. "On the one hand, it's good for [state-owned enterprises], because they get quite a significant profit and [can] fund development of their brands." Visitors look at the FAW Hongqi H9+ at the Beijing International Automotive Exhibition in September.   © Reuters

"The downside is that the sense of urgency and the requirement to fight as if your life depended on them are not as high for these companies as for many privately owned automakers, which didn't have a foreign partner and had to develop their products and technology completely on their own," he said.

Next year, all foreign players will be allowed to take full control of their joint ventures, but analysts do not expect big changes.

Dyer, a former Ford Motor executive in China, said the policy is a "pretty significant change from the past." But like other analysts, he believes "in practice, it would not probably lead to a big change."

The sales growth of national brand cars over the past decade is mainly from non-SOEs, including Geely Automobile Holdings and Great Wall Motor.

"They may become a bit complacent," she said, as these companies are "getting all that profit from JVs." Because foreign brand cars bring in substantial benefits year after year, she says: "Do they need to put in so much on new development in proprietary brands?"

Claire Yuan, director at S&P Global Ratings, wrote in a recent report that Chinese proprietary brands are "most vulnerable to industry downturns, in our view due to less appealing product technology and user experience." She says that German and Japanese brands will continue to benefit "due to better functionality and higher residual value."

Yuan told Nikkei in a separate reply that joint-venture brands have been "launching more lower-end models in recent years at very competitive prices," as the Chinese auto market has been shrinking in overall sales since its peak in 2017. Prices for foreign cars are coming down to the levels where proprietary brands traditionally had an advantage. Chinese state-owned automakers are not standing by idly.

Guangzhou Automobile said in September that it established a management committee to steer the development of domestic autos and intended to "elevate the competitiveness of the proprietary brand."

Alexious Lee, auto sector analyst at Jefferies Hong Kong, sees a silver lining for some state-owned automakers. Even though he remains less optimistic for most state-owned enterprises, he sees a potential breakthrough for Dongfeng.

Lee views the company's new electric vehicle brand, Voyah, under the new joint venture, Lantu, as a game-changer. Its partners are not vehicle companies but tech powerhouses, including Huawei Technologies, Tencent Holdings and Contemporary Amperex Technology. More importantly, Dongfeng does not hold a majority share.

"The market is evolving," Lee said. Dongfeng's electric vehicle joint venture plans to unveil its first proprietary models early next year. "As more and more buyers are going online, manufacturing is not the problem, but it's about a new distribution model," he said.

In September Vice Premier Han Zheng paid a visit to Dongfeng's headquarters in Wuhan -- the epicenter of the pandemic -- to give employees a morale boost. He examined the exhibition hall of achievement in proprietary science, technology and innovation and took a ride in the latest self-developed autonomous-driving EV van.

Han, a member of the Politburo Standing Committee, the country's top decision-making body, had reason to be impressed: He was a young cadre in Shanghai when the first Volkswagen model rolled off the assembly line of the German carmaker's joint venture with SAIC in 1983.

The message he left at Dongfeng: "So long as we set our path steadfastly to innovate, then we are able to grasp original, core technology in our hands." Wang Xiaoqiu, president of SAIC, said recently that the company "will be releasing close to a hundred new-energy vehicles by 2025, including almost 60 models to be proprietary models."

The government said in early November that China will vigorously bolster new energy vehicles -- including electric, plug-in hybrids and fuel cells. Beijing now targets sales of these cars to be more than half the overall market by 2035, mainly fueled by domestic suppliers.

Still, it is not clear whether the mindset of auto buyers in China will change for domestic car brands.

"All Chinese automakers must face the fact that consumers have inherent negative impressions and cognitions of Chinese auto brands," Du Guozhong, assistant general manager at BYD, said in an interview with a local media during the 10-day Beijing International Automotive Exhibition, which ended in early October.

The private company, backed by Warren Buffett, is considered a leading proprietary electric vehicle maker, but Du noted that "still a lot of people do not understand, do not approve and do not like Chinese auto brands."