China's local governments ride to the rescue of EV startups

HONG KONG -- When Chinese electric vehicle maker Nio in March told investors it might not have enough capital to survive another 12 months -- just a year after a high-profile US IPO -- many thought it would be the end of the five-year-old startup.

But after job cuts, an executive exodus, battery fire and vehicle recalls, there was one investor brave enough to step into help the lossmaking company: the municipal government of Hefei.

The capital city of the southern province Anhui might not seem the most likely judge of a startup's success. But by agreeing to invest 7 billion yuan ($1 bllion) in cash for a 24.1% stake in Nio's China entity -- and getting Nio to relocate its headquarters from Shanghai and inject its core assets and businesses into a local company -- Hefei has made itself integral to one of China's biggest hopes of creating a powerful rival to Tesla.

Such willingness by local governments to become engines of success for China's young cluster of EV startups is an often underestimated factor. While Nio, Xpeng Motors, Li Auto and WM Motor have been touted as representatives of the country's vibrant new economy, with their founders labeled as China's versions of Elon Musk, their bold visions have often relied heavily -- if not always as openly as in the case of Nio -- on state backing. That support from the likes of Hefei appears set to have significant repercussions at a time when the fledgling sector is under severe financial stress. It is giving the carmakers breathing space, but also creating rival poles of interest that some think will not necessarily lead to the creation of strong "national champions" that can challenge Tesla.

The state backing is broadly supportive of the agenda set by Beijing, which has made clear that EV makers are a strategic imperative for the country as part of the "Made in China 2025" initiative.

But it also risks creating further uncomfortable scrutiny of the automakers by the U.S. government, whose crackdowns on Chinese tech have shown how determined Washington is to restrain Beijing's ambitions in some of the key industries of the future.

Analysts of the sector nevertheless think China's determination to develop the sector, and stimulate the economy, will keep the money flowing.

"The involvement of state capital is necessary because the automobile industry concerns the national interest and people's livelihood.," Wayne Shiong, partner at venture capital China Growth Fund said. He said the strategic importance of EVs for energy security and trade meant Beijing is not likely to let the players compete freely before some can stand on their own feet. "An industry consolidation will come much later," he said.

To fight air pollution and reduce reliance on fuel, China has a goal to push the sales of new energy vehicles -- including battery-only EVs, plug-in hybrids, hydrogen powered cars -- to 25% of overall car sales by 2025. 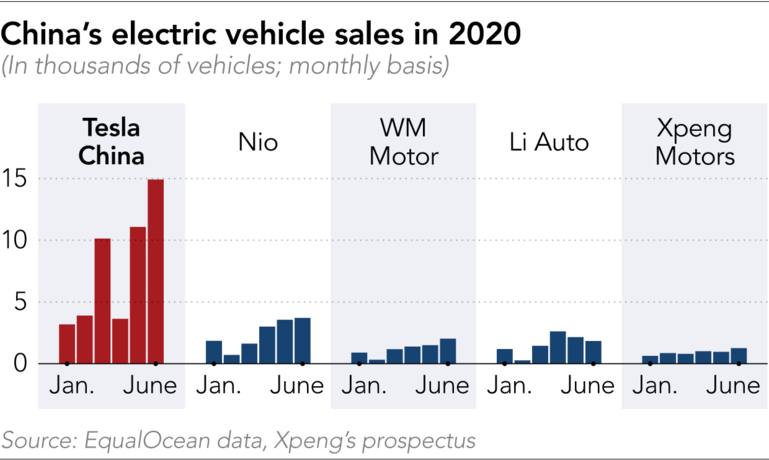 China is already the world's largest EV market, with 57% of the global market as of April. Aside from Tesla, the market remains dominated by the EVs produced by more established carmakers such as BYD and GAC Group.

Nio and its peers are just starting to make an impression. But in many senses, these newcomers are a step closer to making what the next generation of vehicles will look like, with more data-driven, AI-enabled function, including autonomous driving and network connectivity.

The popularity of this type of "smart vehicles" in China has been demonstrated by Tesla, now worth nearly twice as much as Toyota. With the deliveries of its Shanghai-made Model 3 beginning this year, Tesla reached an impressive market share of more than 20% in China in just a few months, when the overall EV sales were down 37% in the first half of the year.

The strong showing of Tesla has put great pressure on its lossmaking Chinese challengers, which need more firepower against their strong U.S. rival -- and local governments are among the first doors they are knocking on.

"The regional governments are very strong investors. They will be the lifesaver for China's EV startups," Cui Dongshu, secretary general of the China Passenger Car Association said. 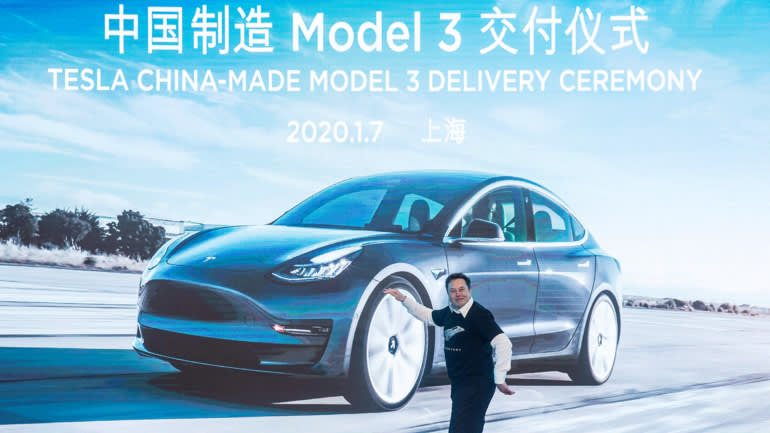 The relationship can be mutually beneficial. After the economic havoc caused by the pandemic, local officials are under pressure to invest in new projects to stimulate growth under Beijing's drive to stabilise employment. The frontrunners of China's EV startups are among the top investment choices, Cui said, as local officials hoping to cover themselves in glory by nurturing home-grown champions in industries promoted by the Central Government.

The common practice is that the EV startups would either move their headquarters or build factories in regions where the governments invest - a great boost to local reputation and employment.

"Hundreds of city-level governments are competing for big projects. There are not many good ones at the moments," Cui said.

Compared with private investors, regional governments are blessed with better access to capital through special financing vehicles and bond issuance. Regional governments raised 3.5 trillion yuan of bonds in the first half of the year, up 22.9% from a year ago after the ministry of finance increased issuance quota. Local officials also tend to prioritize benefits to the overall economy over financial returns, he said. 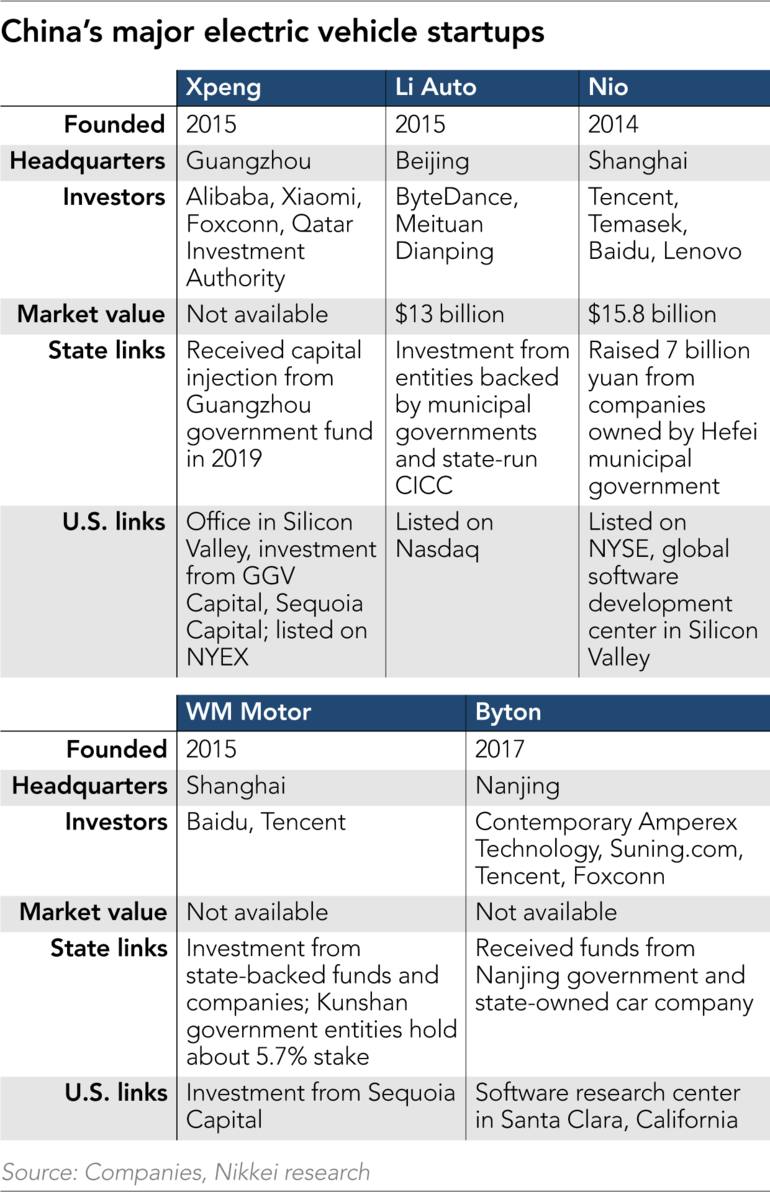 Xpeng Motors, which made its U.S. stock market debut on Thursday, counted the government of Guangzhou as an investor through a state industrial fund. The Kunshan government holds about 5.7% stake in WM Motor through entities it backed.

In Nio's case, two months after the deal with the Hefei government, the local branches of six state-owned banks agreed to extend 10.4 billion yuan credit lines to the loss-making company. It raised a further $430 million through sales of its American depositary shares in June, with Tencent Holdings, Nio's second-largest shareholder buying a quarter of them. Along with its strong sales performance in the second quarter, Nio's share price has jumped fivefold since April.

Still, state support is not a guarantee of success for the EV startups. In July, Byton, founded in 2017 by two former BMW executives, had to suspend its China operations and productions for at least six months despite previously receiving hundreds of millions of dollars from the Nanjing government, which still holds about a 20% stake in the troubled company. CEO and founder Daniel Kirchert said the decision was made due to a failed attempt to raise new funds.

And with the heightened efforts of the Donald Trump administration to corner China's frontier technologies, analysts warn that government ties could expose the EV startups to greater political risk.

While none of the startups sell vehicles in the U.S., many have research centers and raise funds there. Both Xpeng and Nio develop software in Silicon Valley, and U.S. venture capital firms Sequoia Capital and GGV Capital are active investors in China's EV startups. 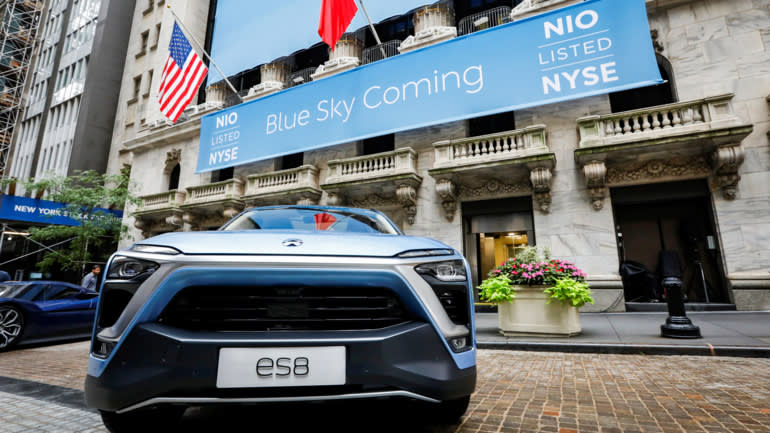 The share price of U.S.-listed Nio has jumped fivefold since April, and the EV maker enjoyed strong sales in the second quarter.   © Reuters

Xpeng has warned in its prospectus that its business can be adversely affected by the political tensions between two countries, as a "substantial part" of its research and development on autonomous driving is conducted in the U.S. Meanwhile, proposed U.S. legislation that would limit Chinese companies' access to its capital market might also have an impact on its fundraising activities, it said.

"Many investors dare not invest in Chinese companies that are backed by state capital in the U.S., because they don't know how the policies will change under Trump," Lu Ming, head of technology, media and telecoms research at Aequitas Research, which publishes on Smartkarma, said.

Lu said previous U.S. crackdowns have been limited to industries where Chinese companies had competitive advantages, but its recent action against short video app TikTok -- with its Chinese owner ByteDance now being forced to sell its U.S. operations -- shows that "the boundary is gone."

Any involvement of state capital, Lu added, can be easily used as an excuse for the U.S. government to suppress Chinese EV startups. "There are too many uncertainties," he said.

Sujoy Sarkar, head of corporate development at Byton, has first hand experience navigating those uncertainties. Sarkar has been responsible for seeking overseas investments and M&A opportunities for the company since 2017, and he said that even before the full-fledged tech competition between Washington and Beijing, Byton's background as a Chinese company drew repeated scrutiny from American authorities.

"China is now a world power, and the U.S. government wants to protect its own interests," Sarkar told Nikkei, "especially [concerning ] such technologies at a scale that affects everyone."

And that is not the potential only drawback to extensive state involvement in China's EV startups.

"Based on my own experience, I'd say most [Western] investors are capitalists, and most prefer limited to no government involvement," Sarkar said.

But with keen China to leapfrog foreign EV leaders like Tesla, there is little chance of either Beijing or local governments applying the brakes.

"In order to be successful - Chinese EVs will need continued funding until they are able to reach break-even on their business models," Sarkar said, "The Chinese government knows this is a long-term investment that will pay dividends in the long run."