Asian steel-makers outside of China are being forced to restructure due to what is happening inside China.   © Reuters
Business Spotlight

TOKYO -- In late July, Vietnam-based steelmaker Hoa Sen Group made a surprising announcement: it was abandoning the construction of a $10 billion production complex.

"The current objective situation is no longer consistent with the original strategic goals," the company said. The group originally proposed the project in 2016. It was to construct multiple blast furnaces that together would have the capacity to turn out 16 million tons of steel a year.

Hoa Sen's retreat and Baowu's big step ahead illustrate how the pandemic has divided steel-makers into winners and losers -- with the winners in China and the losers everywhere else.

With the pandemic hammering steel demand in much of the world, Hoa Sen is not alone in pulling back in a bid to survive. Well-known Asian players, from Japan's Nippon Steel to South Korea's Posco, are shuttering blast furnaces and reviewing capital spending plans. Asian steel-makers are now rushing to shutter high-cost facilities and reduce their capacity. Posco in July announced it will shutter a furnace at the Pohang works that can produce up to 1.3 million tons of steel a year, or 3% of Posco's total capacity. The company said it will also consider closing or revamping another furnace as early as 2025.

The announcement came three years after Posco first said it would shut the furnace. This time, the death sentence seems certain, with the pandemic crushing domestic steel demand and revenue plunging 16% in the April-June quarter.

In Japan, annual steel production is expected to be less than 80 million tons for the first time in 52 years.

Wherever they are, except China, steel-makers are bracing for huge net losses.

In February, Nippon Steel, announced that it would be shutting two blast furnaces, in Hiroshima and Wakayama prefectures, for good in the next few years.

And in a capital expenditure review, Japan's largest steelmaker slashed 300 billion yen ($2.8 billion) from its initial 2018-2020 target. Spending on business investments, including mergers, will be reduced by 10% from the initial 2018-2020 target of 600 billion yen, according to a company representative. "We'll carefully and strictly select the targets," the representative said.

JFE Steel, Japan's No. 2 player, in March announced it would close a blast furnace by 2023 to cut production capacity by 13%. The move is part of structural reforms announced the same month.

Before the pandemic, steel-makers outside of China were already struggling as the U.S.-China trade war took a toll. After Washington raised tariffs on steel, exports from Turkey and Russia originally meant for the U.S. made their way to Asia, pulling down prices in the region. Chinese steel-makers, meanwhile, rode a rebound in domestic demand prompted by government-led economic stimulus and infrastructure spending, with steel production in 2019 hitting a record high and accounting for 53% of the global supply.

Then the pandemic struck, reinforcing China's dominance in the global steel market.

Global production that month fell by 2.5%.

China Baowu Steel Group is set to become the world's biggest steelmaker this year for the first time, unseating ArcelorMittal, the European giant that has long dominated the global market.

In August, the Asian price for hot-rolled steel coil, used by auto and electrical appliance makers, was up 20% from April. China's accelerated production has also pushed up the price of iron ore, by 30% from January, leading to a significant jump in profit for Australian iron ore suppliers like Fortescue Metals Group. 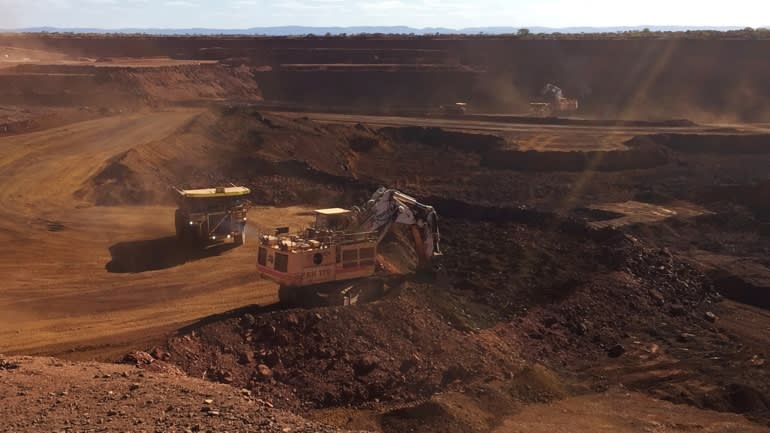 An autonomous truck readies to pick up a load of iron ore at Australia's Chichester Hub, operated by Fortescue Metals Group, a big beneficiary of all the steel China is producing.   © Reuters

Rising steel prices in China made exporting to the country "profitable" for some overseas steel suppliers like Ukraine and Russia, said Miller Wang, principal consultant at Wood Mackenzie.

But not many companies are benefiting from these exports. The fact is only 2% of China's steel consumption is fed by imports. "China's steel market is actually quite independent," Wang said.

This is partly because construction accounts for 60% of all steel consumption in China, while Japanese steel-makers focus on high-end products mainly used by automakers. But Japan's mills still struggle with the repercussions of Chinese demand -- higher raw material prices. They are also being squeezed by falling domestic demand.

Eventually, China's appetite for steel will be sated. When this happens, conditions in Asian markets could rapidly deteriorate if cheap exports from China flood in.

"We are carefully monitoring steel exports from China," a Nippon Steel representative said. 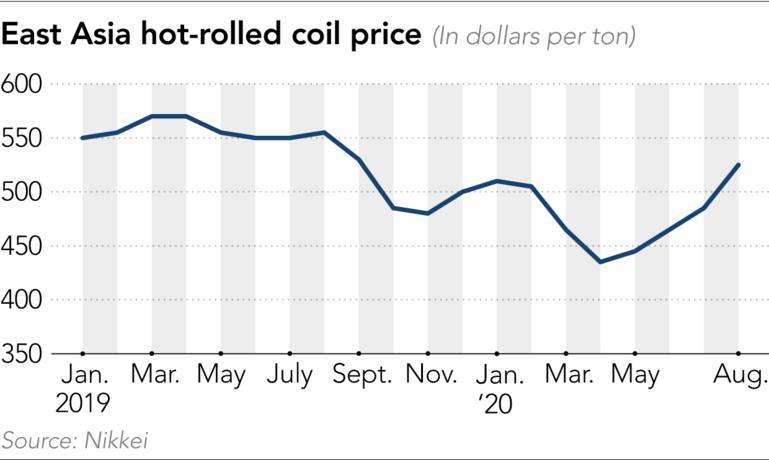 Wood Mackenzie's Wang wonders whether China might make a financial policy pivot that could trigger a downturn. In doing so, he is looking back at what happened after the Lehman shock, which came 12 years ago this month.

China responded by launching an extensive stimulus package to rescue crisis-hit local companies that was so large it ended up having a positive impact on the global economy. The government also provided incentives for real estate projects, which resulted in skyrocketing real estate prices. All of the government measures created an investment effect that lasted four or five years.

Today, however, Chinese authorities are concerned about a housing bubble and have been trying to suppress real estate prices. President Xi Jinping in 2017 famously declared that "houses are built to be lived in, not for speculation."

Currently, the goal is to stabilize real estate prices while maintaining a certain level of economic growth.

With China taking measures to control real estate prices, the duration of the infrastructure investment effect will be shorter than what followed the Lehman shock, Wang said, adding that "peak steel production will come faster this time."

Already there are concerns of a steel glut. To allay these worries, the Chinese government has set a goal of raising the share of the domestic market controlled by the country's top 10 steel-makers to 60% by the end of this year. Workers at a small plant in Shenyang, Northeast China, make steel in 2009, when an enormous government stimulus program helped China lead a global recovery from the Lehman shock.   © EPA/Jiji

The top 10 steel-makers' combined share now stands at around 37%, as many private companies that account for 60% are reluctant to merge. Unlike state enterprises that the government can coax into merging, private companies are difficult to consolidate as they are important employers and taxpayers in their local areas.

Asian players are not only fearful of a steel glut in China.

Chinese steel-makers, in search of a way out of the U.S.-China trade war, have been on a blast furnace construction binge in Southeast Asia. As a result, the region's capacity has swelled so significantly that the Southeast Asia Iron and Steel Institute has issued a warning: In the next few years, the region may face risks of overcapacity with a production increase of more than 61.5 million tons a year.

Despite these concerns, Vietnam's Hoa Phat Group began operating a new blast furnace in late August, increasing its output capacity by 50%. A fourth furnace is to come online next year, making the group the country's largest steelmaker.

Pricing battles are heating up in the region.

Meanwhile, steel-makers that manage to weather the pandemic will emerge into another storm. "It will take time for steel demand to recover," a Nippon Steel representative said, given the existence of multiple negative factors like the U.S.-China trade war and weakening emerging-market currencies.

JFE Steel executives agree. "Post-coronavirus steel demand trends are very uncertain," a representative said, "and even if demand does recover, we expect the pace to be quite slow."

Nippon Steel and JFE Steel believe they have to speed up their reform drives. "Given the accelerated pace of structural changes in the business environment," a Nippon Steel representative told the Nikkei Asian Review, "we will have no choice but to add more measures to the structural reforms we announced in February."

Those reforms included reducing costs by more than 200 billion yen ($1.8 billion), shuttering two blast furnaces and retreating from unprofitable businesses such as the titanium round bar business.

Downsizing and reducing operational costs will be key to weathering the storm ahead, SMBC Nikko Securities' Yamaguchi said. "Whether steel-makers can survive in the post-coronavirus era depends on what they do now," he added.

But as Asia's steel-makers do this, their Chinese rivals are using the pandemic to further increase their presence in the global market, according to Yuji Matsumoto, a senior analyst at Nomura Securities. More than ever, Matsumoto said, "global steel supply and demand will depend on the situation in China."