PHNOM PENH -- Chul Sreymom, a seamstress at the Sangwoo factory near Phnom Penh, has been putting together clothes for some of the world's biggest fashion brands for as long as she has been working. But this week she watched as 60 of her colleagues were sent home as Sangwoo's work dries up -- and now the breadwinner for elderly parents fears she will be next.

"I don't know what else I can do," the 40-year-old told the Nikkei Asian Review. "Working in a garment factory is what I have done all my life."

She is among millions in Asia's low-wage apparel export industry whose livelihoods are jeopardized by the coronavirus pandemic.

Four months after its emergence in the Chinese city of Wuhan, the novel coronavirus has triggered an unprecedented crisis for Asia's apparel exporters who, thanks to the rapid globalization of the past decade, employ millions of workers and help underpin some of the world's most fragile economies.

The trouble began in February with fabric supply shortages as the virus hit China's $250 billion textile sector. But just as China restarted production -- giving garment factories hope of getting operations back on track -- demand collapsed as lockdowns around the globe forced retailers to shut their doors and populations to prioritize staples.

The crisis is hitting as the industry was already facing the prospect of globalization going into reverse as consumer concerns grow over labor standards and Western fashion brands consider relying more on shorter supply chains closer to home.

"We have zero cash flow and buyers are not upholding their end of the contractual obligations," said Ken Loo, secretary general of the Garment Manufacturing Association in Cambodia.

"How many companies do you think can survive long with zero cash flow? Even the most successful airlines in the world have announced they may go bankrupt without government assistance. That's what we are facing."

It is a similarly grim story across the region, where thousands of factories have been partially or fully closed. 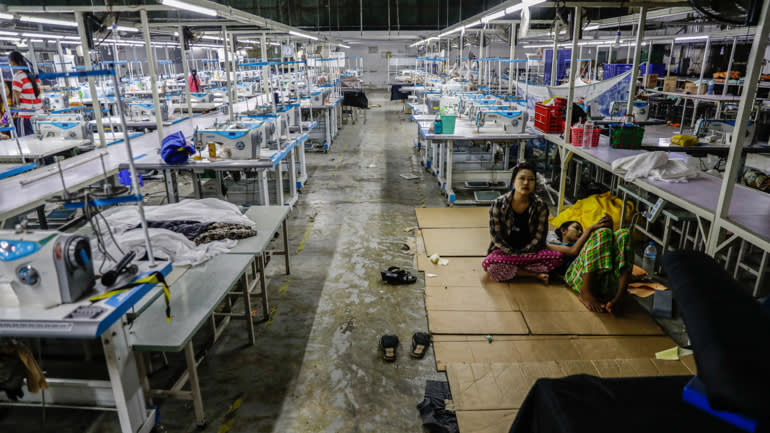 Workers occupy a recently closed garment factory near Yangon, Myanmar, on March 6 to demand their salaries and overtime pay as the coronavirus deals a heavy blow to the region's garment industry.   © EPA/ Jiji

"All orders are cancelled," said Mostafiz Uddin, a factory owner in Bangladesh, where reports estimate some $3 billion worth of contracts have been paused or scrapped and more than 1 million workers have been fired or furloughed.

In Indonesia, more than 3 million work in the sector. "Demand is declining sharply," said Jemmy Kartiwa chairman of a textile association there.

In Vietnam, a textile industry body estimated their sector could take a $467 million hit. In Myanmar, where at least 20 factories halted amid the fabric shortage and more suspensions are expected, it's now a matter of survival, said Khin Maung Aye, chairman and founder of a 10,000-worker jacket and shirt factory in Yangon.

"If you survive now, you will be back again," he told Nikkei, adding job losses were inevitable.

Survival, however, is far from guaranteed for manufacturers operating on thin margins and often pay-on-delivery terms.

Some brands including H&M and Zara-owner Inditex, committed to pay in full for existing orders. In a statement, H&M said the "extreme situation" had necessitated a pause on new orders. "Our long-term commitment to suppliers remains intact," the company said.

Others brands, however, have triggered "force majeure" clauses. A cancelation letter seen by Nikkei, purportedly from Europe's C&A to suppliers, asserted the "extraordinary situation" had "materially changed ... if not destroyed" the preconditions of the orders.

"Consequently, parties can no longer be reasonably expected to uphold and/or perform the affected agreements," the letter stated.

In an email to Nikkei, C&A spokesman Jens Volmicke called the letter a “"precautionary measure" amid the crisis, which has seen the company close all of its 1,400 stores in Europe.

"We are working hard to minimize the impact on our suppliers and intend to accept all goods that have left the factory," Volmicke said. "We are in close contact with our suppliers to find flexible, individual arrangements also for garments currently in production. We aim to take delivery of as many orders as commercially viable."

"There's a domino effect that's really very scary," Hertzman said. "It's just not about the stores closing and how quickly they reopen. There's a lot of damage that's gonna be done that's going to be hard to repair."

Workers' advocates are already condemning such moves. Human Rights Watch urged brands not to "forsake the factory workers". Clean Clothes Campaign outreach coordinator Christie Miedema said brands had a responsibility to those working in the sector.

"They've profited from this cheap labor for decades without paying for any social security," she told Nikkei. "That profit needs to be paid back now, because there is no social security in place for many of these countries and there's nothing that workers can fall back on."

There is also growing concern over the spread of coronavirus locally. Bangladesh and Vietnam have already implemented lockdowns, while in Cambodia, 91 garment factories have suspended work, with 61,500 workers affected. Those still able to work fear contracting the virus, say union leaders.

Economically, the coronavirus crisis far exceeds anything the garment industry has faced before, in part because no one knows how long it will last. 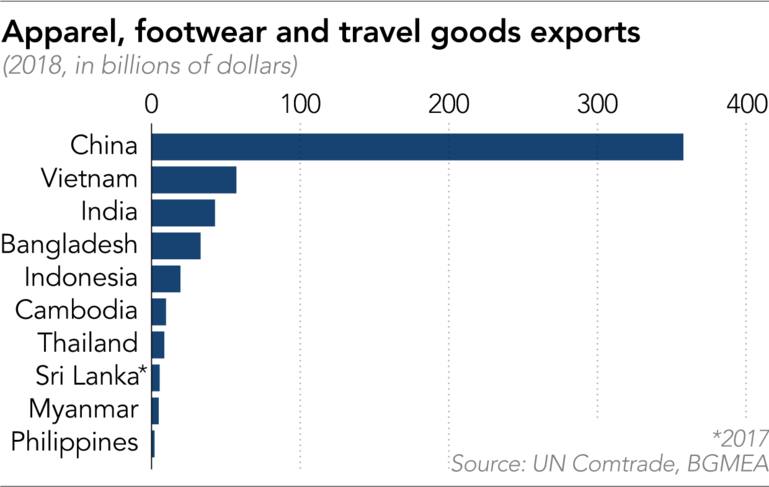 London-based Capital Economics forecasts the global economy will contract by 2.5%.

Pointing out it was the "weakest rate of growth since the Second World War," Gareth Leather, senior economist in Capital's emerging Asia team, said textile producing countries are especially vulnerable.

"In the U.K., some of the big shopping companies [are] worried about their own survival. They're not worried so much about the survival of people much further down the chain," he said.

"It's going to kick these economies really hard, especially considering how dependent they are in this sector."

For Cambodia, the pandemic dealt a second blow to its $10 billion apparel sector, which employs more than 800,000, after the EU in February decided to partially suspend its duty-free access to the bloc over human rights concerns. With its tourism industry battered, the country's GDP growth could drop from 7% last year to 1% in a worst-case scenario, the World Bank predicted in its most recent economic forecast.

The heavy dependence of these economies on the garment industry stems from the accelerated pace of globalization since the global finance crisis, according to Sheng Lu, an associate professor at the University of Delaware's department of fashion and apparel studies.

"While Cambodia, Vietnam, Myanmar, Indonesia and Bangladesh were small players in world apparel trade back in the 2009 global financial crisis, they all hire hundreds of thousands of garment workers today," he said. "The stakes have never been so high." 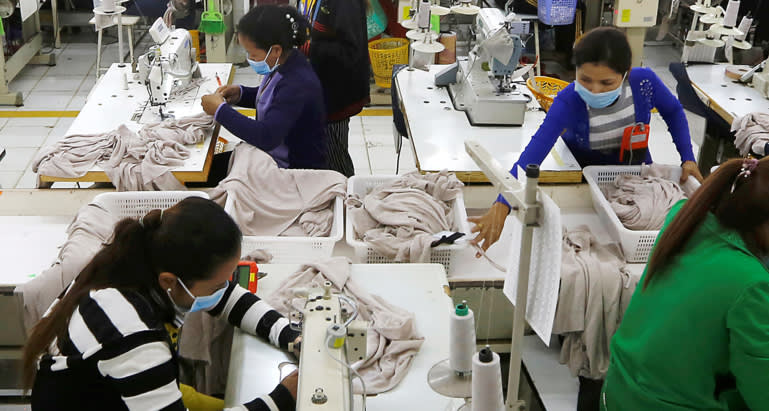 Lu, who has analyzed the impact of Covid-19 on apparel trade in three scenarios, said China, as the world's biggest textile producer, would be hardest hit as U.S. and EU buyers cancel large-volume orders.

He predicted Vietnam, with a more diversified export market, had some flexibility and was in a "better position". Bangladesh, however, as a leading supplier to both Europe and America, would be "significantly hit." Reports have estimated the country could lose up to $6 billion in apparel export revenue.

Job losses will hit hard across the board, Lu said, estimating a 10% drop in exports would translate to at least a 4-9% drop in employment.

"In developing countries such as Bangladesh and Cambodia, the apparel sector remains the single largest job creator for the local economy, especially for women."

Research released this week by Penn State's Center for Global Workers' Rights, cites a survey of 316 suppliers in Bangladesh, a country with some 4.1 million garment workers. Surveyed between March 21 and 25, more than half of respondents reported the bulk of their orders had been cancelled. Buyers largely refused to cover production costs and already-purchased raw materials, the study found.

Almost 60% of factories surveyed report having to shutdown most or all of their operations, while more than 70% of furloughed workers were sent home without pay.

"Workers don't have food if they don't have money," said Nazma Akter president of the Sommilito Garments Sramik Federation in Bangladesh, which has more than 100,000 members. "Bangladesh has 160 million people. It's a small country with a high density of population. ... If we don't protect workers, it will be a disaster." 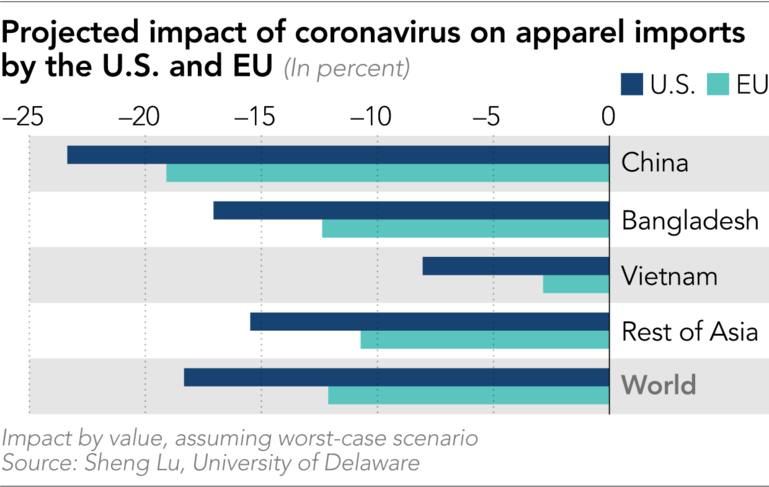 Bangladesh Prime Minister Sheikh Hasina recently announced a $588 million package for the $40 billion export sector, of which garments account for 84 percent. She asked companies to put the money towards paying workers.

In Cambodia, the government has announced tax holidays for struggling factories and proposed a 60% of wage subsidy scheme for furloughed workers, with 20% paid by the government and 40% by factories.

A spokesman for Cambodia's Ministry of Economy and Finance said more measures were in the pipeline. "We need just a bit more time," he said.

However, doubts have already emerged about whether even the measures already announced are feasible given the existential threat to suppliers. Leather of Capital Economics warns that governments in developing countries simply do not have the financial strength to bailout industry.

How quickly apparel industries can recover firstly depends on when the virus is brought under control, with progress likely to vary from country to country. If demand improves, Lu said the world apparel trade volume could "bounce back fairly quickly."

"For example, affected by the 2008 global financial crisis, the value of world apparel exports dropped by 12.8% in 2009. However, the growth rate quickly rebounded to 11.5% the following year," he said.

But importers and garment factories alike will likely have to deal with labor shortages, raw material price increases and a lack of production capacity, he said.

Hertzman, of the Sourcing Journal, went even further, saying the sector is facing a "reckoning".

"Whether you go upstream to the tier one or tier two factories or you go all the way down to the retailers and wholesalers, this industry is going to be one of the most impacted because even in a bull market, with a strong economy and fundamentals, it was still struggling."

"The landscape is never going to look the same."

Nikkei staff writers Yuichi Nitta in Yangon and Erwida Maulia in Jakarta contributed to this report.