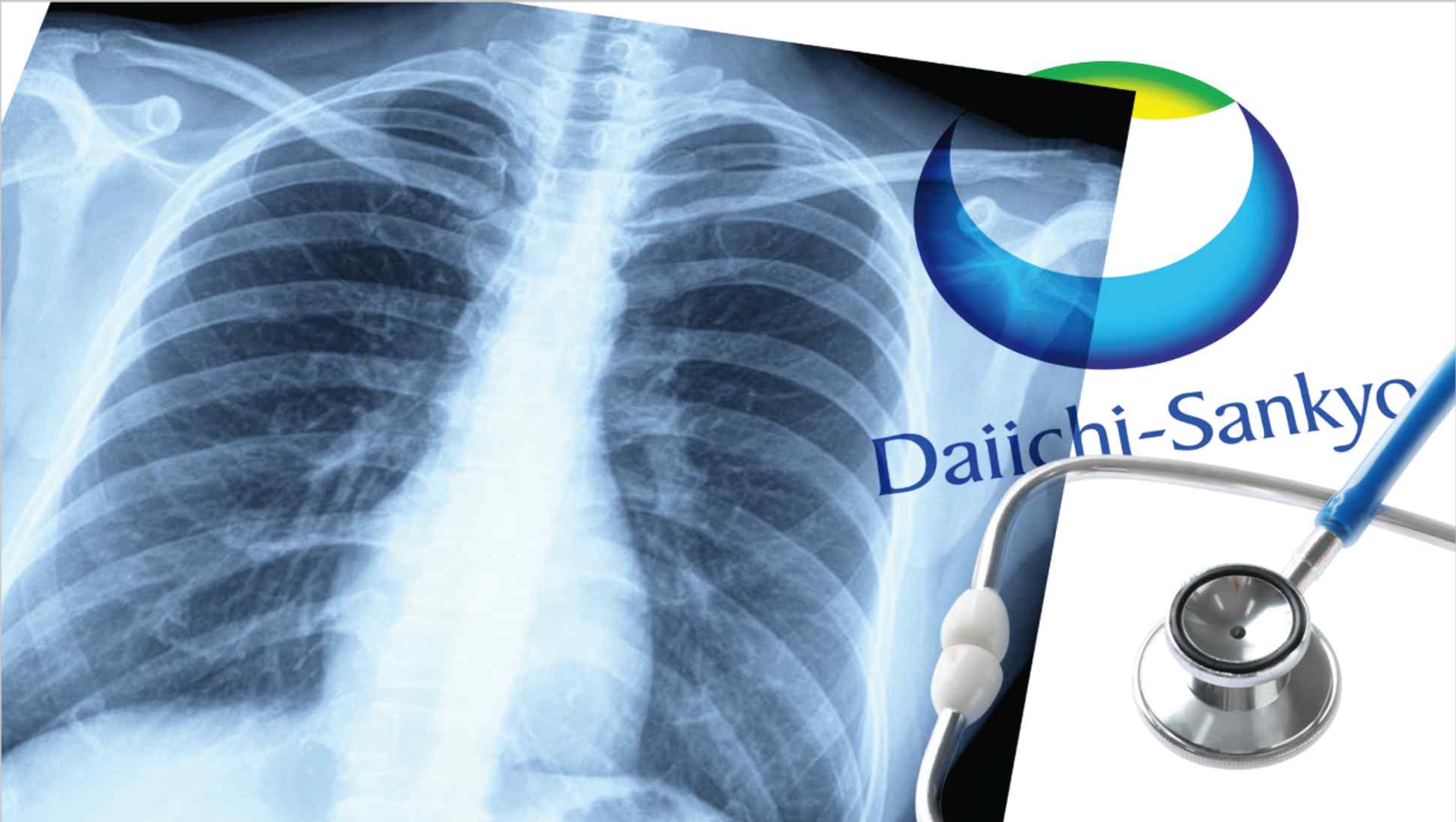 Many investors have flocked to buy Daiichi Sankyo shares following the successful launch of its Enhertu cancer treatment that mainly targets breast cancer and is widely expected to become a global blockbuster. (Nikkei montage)
Business Spotlight

Daiichi Sankyo: Drugmaker roars back to health with cancer success

TOKYO -- Until just several years ago, pharmaceutical manufacturer Daiichi Sankyo was one of the most unpopular public companies among investors in Japan, rocked by an internal feud and reeling from a disastrous acquisition in India. But it has roared back and is now one of the country's most valuable corporations.

With its market capitalization hitting 8.2 trillion yen ($78.9 billion) in late November -- the highest since the company's creation through a merger between two Japanese drugmakers in 2005 -- it is now ahead of Takeda Pharmaceutical, the sector's revenue leader in Japan, and competes with Chugai Pharmaceutical, a unit of Switzerland's Roche, for the title of the most valuable such corporation in Japan.

Driving a threefold jump in Daiichi Sankyo's share price in just two years is its Enhertu cancer treatment, which is widely expected to become a global blockbuster with annual sales of $1 billion or more. The drug is developed and marketed with British drugmaker AstraZeneca.

"The technologies of the former Daiichi Pharmaceutical and Sankyo were made into a new drug after 10 years of work," said Daiichi Sankyo CEO Sunao Manabe when the company announced its financial results for the quarter ended in September. "I'm confident [of Enhertu's success]," he added. British research company Evaluate expects Enhertu to generate $3.1 billion in revenue in 2025.

"It is too early to call Daiichi Sankyo an innovative drugmaker that represents Japan," Fumiyoshi Sakai, drug sector analyst at Credit Suisse, told Nikkei Asia, because its cancer offerings are still too few to make it a global oncology house. However, "it has taken the first step toward that... Daiichi Sankyo could set an example that a Japanese company can still develop a globally competitive drug in Japan."

The success could also create a new business model for Japanese pharmaceutical companies as global niche players, in contrast to the approaches of Takeda, which has pursued scale through the $62 billion acquisition of Irish drugmaker Shire, or Chugai, which has chosen to integrate with a mega-pharma. 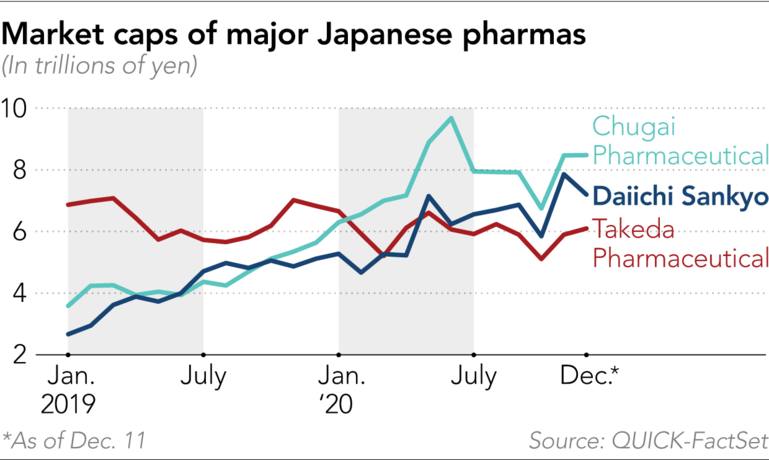 Daiichi's revival comes at a time when Japanese pharma's contribution to battling COVID-19 has been under scrutiny. Concerns have long been raised about barriers to the development of a research-intensive pharma industry in Japan, including difficulty for academic researchers to commercialize their discoveries, lack of startups and small R&D budgets.

Many investors should remember the Daiichi Sankyo debacle in the late 2000s. The drugmaker acquired what was then India's largest generic drugmaker, Ranbaxy Laboratories, for 500 billion yen (around $5.1 billion at the time) in 2008 as part of a hybrid strategy of pursuing both new drugs and markets for generics.

It was hoped the acquisition would give the Japanese company access to the world's largest generics market, the U.S. Instead, quality issues led to Ranbaxy being barred from America. Daiichi Sankyo was forced to write down much of the investment in the following year.

Even before this fiasco, there was internal discord after the 2005 merger. Daiichi and Sankyo maintained separate research and development operations under a holding company, with the two sides competing against each other, rather than against their rivals, for control over the integrated entity.

The failure of the Indian acquisition left the company's reputation in tatters. "It was arguably the most disliked company -- not only in the Japanese pharmaceutical sector but across all industries -- in Japan," recalled Credit Suisse's Sakai. It took Daiichi Sankyo until 2015 to dissociate itself from Ranbaxy.

It is now five years since the Tokyo-based company decided to focus on cancer treatment. Daiichi Sankyo's mission, for the time being, is to put out more cancer drugs and build a presence in the market, which is dominated by companies such as Merck, Roche and AstraZeneca, to show a new growth path by demonstrating its capability in research and development. 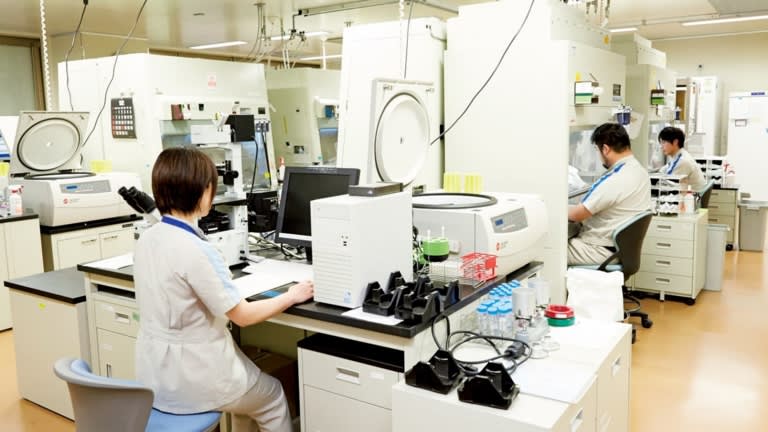 Daiichi Sankyo's R&D facility in Tokyo. The company decided to focus on cancer treatment five years ago after the Ranbaxy fiasco. (Photo courtesy of the company)

The company's answer is antibody drug conjugates, or ADCs, which allow cancer-killing toxins to be delivered to target cells, sparing healthy ones from harm, unlike conventional chemotherapy. Daiichi Sankyo's key contribution is a "linker" that has enabled a large number of drugs to be attached to cancer-seeking antibodies, making ADCs a more potent therapy.

Several ADCs are now under development at Daiichi Sankyo, including Enhertu, which targets the HER2 protein present in many breast cancers, and DS-1062, which targets the TROP2 protein. Under recent deals with AstraZeneca, the Japanese drugmaker could receive up to $13 billion for Enhertu and DS-1062.

Not all analysts are yet convinced that Daiichi Sankyo has found a viable niche in the highly competitive global market. A drugmaker has to keep releasing new drugs because patents expire in 20 years. Japanese drugmakers do not yet have a track record of consistently releasing blockbusters. Despite a few successes, such as Ono Pharmaceutical's cancer therapy Opdivo, Japan's presence is minor in the cancer field. Daiichi Sankyo CEO Sunao Manabe speaks during a recent interview with Nikkei Asia. He sees a big opportunity in Asia, where there is an increasing need to treat lifestyle diseases and cancer. (Photo by Kosuke Imamura)

"It has been easy for Japanese drugmakers to make a profit in Japan because drug prices are regulated under the nation's single-payer system," said Kazuaki Hashiguchi, an analyst at Daiwa Securities. The system has allowed Japanese drugmakers to build up their financial arsenals and acquire overseas pharmaceutical makers. But "are they developing innovative drugs within Japan? No," he said.

Daiichi Sankyo has to persuade people like Hashiguchi that it will be an innovative producer.

What Daiichi Sankyo has shown is that its traditional expertise can still yield results if combined with trailblazing technology. This less focused approach "has turned out to be useful," said Daiwa's Hashiguchi. "That's the characteristic of Daiichi Sankyo, for good or bad."

The company still pales in terms of R&D spending. It spends about 20% of its sales on R&D, amounting to $2 billion a year. But that is merely one-fifth to one-sixth the amount spent by global R&D leaders such as Roche, Johnson & Johnson and Novartis. 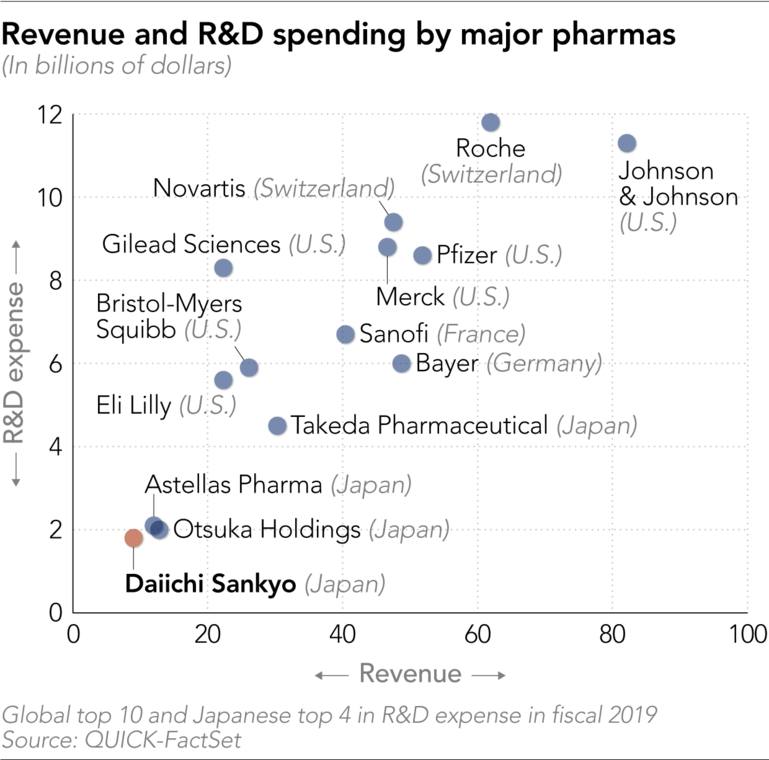 On the sales front, the ability to sell products in foreign markets also will be tested, as the company's overseas sales ratio is lower than those of its domestic peers. Daiichi Sankyo is still domestically focused, with only 39% of sales coming from outside Japan in the year ended in March, compared with 82% for Takeda and 73% for Astellas.

The Japanese drug market, valued at $87 billion in 2019, or 7% of the $1.25 trillion global market, is expected to shrink, while the U.S. market, now 41% of the global total, grows at a rate of 3% to 6% a year, according to IQVIA Institute, which tracks global spending on medications. New rivals are also emerging in Asia, such as South Korea's Samsung Biologics.

"We want to contribute to healthy life of the people around the world," said Daiichi Sankyo CEO Manabe, a former visiting scientist at Ohio State University. He notes that the incidence of lifestyle diseases and cancer is increasing in China and that the company is looking at potential opportunities there.

Still, the company is cautious on major M&As following the Ranbaxy debacle. "We will consider acquisitions as necessary," Manabe said in a recent interview with Nikkei Asia, adding that "domestic research alone won't be enough." But he also said, "We are not contemplating major acquisitions similar to those undertaken by mega-pharmas."

Daiichi Sankyo has set a goal of becoming an innovative drugmaker that excels in cancer treatment as part of a five-year plan through fiscal 2020. At the same time, it is keeping various options open instead of targeting cancer only.

The medium-term plan calls for the company to maintain its No. 1 sales position in Japan by being present in all four key areas: new drugs, vaccines, generics and over-the-counter medicines. Manabe said that cancer treatment is only one of the areas it concentrates on and that it hopes to find a clearer focus in the next five-year plan period through 2025.

Among the new initiatives is the development of a coronavirus vaccine using messenger RNA, or mRNA, a technology also used by Pfizer and Moderna. The goal is in part to build the capability to develop a vaccine domestically in case a new variant of the virus emerges in the future, but also to develop a technology for cancer vaccines.

For now, investors are giving the benefit of the doubt to Daiichi Sankyo's diversified strategy. They are also hoping, however, that it will eventually discover real strength that competitors won't be able to match.

"Just because a company has come up with one successful ADC doesn't mean that it will continue to produce innovative drugs one after another," said Daiwa's Hashiguchi.