A May 18 Indonesian newspaper ad promotes the merger between Gojek and Tokopedia.   © EPA/Jiji
Business Spotlight

Listing plans by Grab and Gojek-Tokopedia put focus on profitability

SINGAPORE -- Imagine if U.S. e-commerce giant Amazon, food delivery company DoorDash and ride-hailing app Uber Technologies were to join forces. That is the potential that the Gojek-Tokopedia partnership holds for Indonesia, the world's fourth-most-populous nation and one of the fastest-growing digital economies.

Gojek and Tokopedia -- already unicorns in their own right -- on Monday announced they will merge and create a holding company dubbed GoTo Group, covering everything from ride-hailing and food delivery to digital payments and online shopping.

Gojek has over 2 million registered drivers in its motorbike and taxi fleets, while Tokopedia is one of Indonesia's leading e-commerce players. "Gojek drivers will deliver even more Tokopedia packages," Gojek co-CEO Andre Soelistyo said in announcing the merger. And "merchant partners of all sizes will benefit from strengthened business solutions."

The companies will try to make the most of their partnership in a country that consists of 17,000 islands. If they succeed, they could potentially create an e-commerce and logistics service that Amazon might envy.

But Southeast Asia's tech space is hotly competitive, and the creation of GoTo will make it more so. Gojek has been fighting fiercely with archrival Grab, while Tokopedia is competing with Sea, which has rapidly expanded its e-commerce market share throughout Southeast Asia, including in Indonesia. The companies are also in a three-way battle for digital payment supremacy across the region.

Gojek and Grab are in a particularly fierce head-to-head battle to corral users into their respective "superapp" ecosystems. In theory, this should make it hard for the companies to coexist in the same market, as the strategy entails locking in as big a user base as possible. Gojek and Grab last year held merger discussions to overcome this problem but could not agree on the shareholding ratio of a combined entity. A Gojek rider delivers a Tokopedia package in Jakarta. Their merger creates the largest tech company in the world's fourth-most-populous country.   © GoTo Group/AFP/Jiji

On the e-commerce front, Tokopedia is struggling to fend off Sea, the Singaporean company that operates Shopee, Indonesia's most visited e-commerce platform, according to digital researcher iPrice. Its ShopeePay is the country's most used digital payment service, according to Ipsos Indonesia, although the ranking tends to differ from researcher to researcher.

While the competition is expected to intensify, some say there is room for three giants to coexist -- at least for now.

"Despite exponential growth in digital adoption across Southeast Asia and a burgeoning middle class, there are still pockets for expansion," said Shirley Wong, entrepreneur-in-residence at the SMU Institute of Innovation & Entrepreneurship and a managing partner at TNF Ventures. "Over time, it is likely that the Southeast Asian market will be monopolized by a few superapps. However, due to the diversity of culture and consumer habits, we may see some heterogeneity in the apps that dominate across different countries."

One of the bigger challenges for GoTo and its peers, she said, will be differentiation.

Nirgunan Tiruchelvam, head of consumers equity research at Tellimer Research, agrees that companies should be able to coexist in the region. "There is a vast market in Southeast Asia with 650 million people," he said, "and we've only scratched the surface of the digital economy." The gross merchandise value of the region's internet economy is expected to grow threefold, to $300 billion, by 2025 compared with 2020, according to research by Google, Temasek Holdings and Bain & Co.

But Tiruchelvam also said it would take "a few years for [the rivals] to reach the inflection point where the cash burn stops and when they become profitable. If you look at the history of Alibaba and Amazon, there was a certain inflection point -- we are not there yet."

In the meantime, he said, the companies will continue spending money to capture growth, adding that Gojek and Tokopedia should look for cost-saving opportunities under the new group.

All three companies are investing heavily to add new services and expand them across Southeast Asia. Grab, for instance, has added six services, such as digital financial services, since 2019 and is in a hurry to bring them into countries such as the Philippines and Thailand. Sea's 2021 operating expenses more than doubled in the first quarter as the company spent marketing dollars to compete with its rivals.

The constant need for cash is pushing Grab and GoTo to pursue public listings. Weeks before Gojek and Tokopedia's deal surfaced, Grab announced it would go public in the U.S. through a merger with a special purpose acquisition company (SPAC) to raise $4.5 billion. Sea, which is already New York-listed, has a market capitalization of over $100 billion. GoTo will also pursue an IPO by the end of this year to tap into the public market to raise cash to compete with rivals, with sources saying it intends to raise a similar amount as Grab.

Tokopedia President Patrick Cao, who will serve as GoTo president, said in Monday's news conference that the company will pursue an IPO "to be able to raise more capital to invest into serving our customers and expansion." 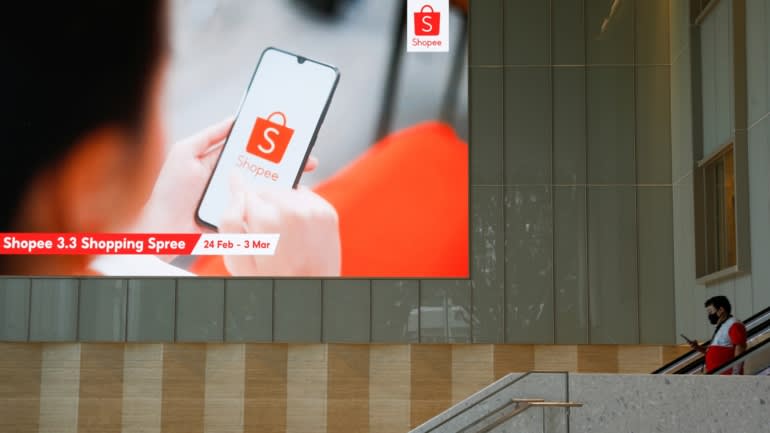 A video wall promotes Shopee, the e-commerce arm of Sea, outside its office in Singapore.   © Reuters

As private companies, Grab, Gojek and Tokopedia have been able to rely on long-term, deep-pocketed investors like SoftBank who are not afraid of taking risks.

Going public, however, means Southeast Asia's most valuable tech groups will face a different set of criteria as they battle for investor dollars. The most obvious, basic one: When will they turn profitable?

Since the companies have prioritized market share and revenue growth, Grab, Gojek, Tokopedia and even Sea have not made a profit. Grab has said its earnings before interest, taxes, depreciation and amortization will not be in positive territory until 2023, while Sea's net loss for 2020 widened to $1.62 billion from $1.46 billion a year earlier.

The planned listings of Grab and GoTo will be a significant test of how the public market views each company's growth prospects and risks. Sea, the only notable publicly listed internet company from the region, saw its stock price rise nearly fivefold last year, partly reflecting the scarcity of alternative investment opportunities in Southeast Asia. Once Grab and GoTo join it in public trading, investors will be able to compare each company's performance each quarter, and their judgments will be swiftly reflected in share price movements.

The governance structure of each company will also come under scrutiny. According to the filing by the SPAC Altimeter Growth, with which Grab will merge for its listing, Grab CEO Anthony Tan, co-founder Tan Hooi Ling and President Ming Maa will have Class B shares, which come with more voting rights. So while they will hold 3.3% of all shares they will control 60.4% of the weighted voting rights. This may speed up decision-making, but it could also draw criticism from investors after the company goes public. Dual-class share structures, while not rare among global tech companies, are often criticized for not providing equal rights to all shareholders. The Hong Kong and Singapore exchanges only allowed IPOs by companies with such share structures in 2018. 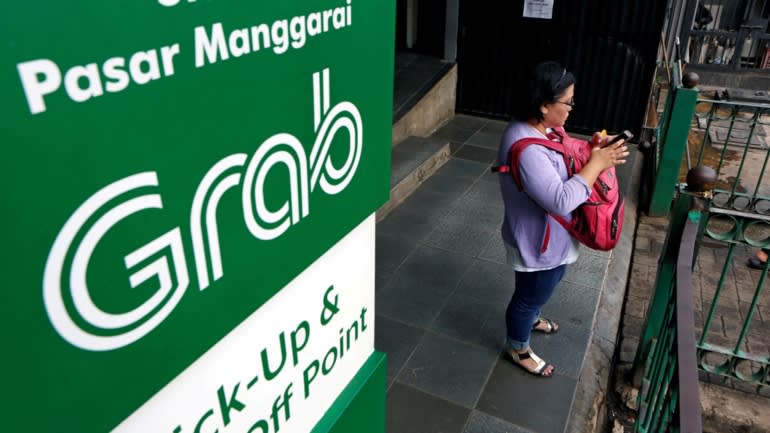 Singapore tech group Grab has added six services, such as digital financial services, since 2019 and is in a hurry to bring them into countries such as the Philippines and Thailand. (Photo by Takaki Kashiwabara)

GoTo's shareholding structure is even more complex. After the merger, Gojek shareholders hold around 58% of the new group, according to a filing with authorities on Monday, while Tokopedia's have 42%. Japan's SoftBank and China's Alibaba Group Holding, the biggest shareholders in Tokopedia before the merger, now hold the top stakes in GoTo, at 15.3% and 12.6%, respectively.

Long-standing rivalries between some of GoTo's shareholders -- such as Alibaba and Tencent, or Facebook and Google -- could hinder the new company from making swift decisions.

Asked about this possibility during the media briefing on Monday, Soelistyo said: "We are here because we have a clear mission and long-term roles that we each individually and now collectively are passionate about. ... I don't think there are any issues with some rivalry that can be seen from our cap table."

A look back at the early days of Amazon may help predict the future of Southeast Asia's tech landscape. Founded in 1994, Amazon made its Nasdaq debut in 1997 and quickly became a dot-com darling. However, its stock price cratered when the bubble burst, and the company clung to survival, not reporting a full-year net profit until 2003 -- nine years after its founding. Many of the other dot-com companies went out of business, having never turned a profit.

Gojek and Tokopedia are already more than a decade old, and Grab celebrated its ninth anniversary this year. All of these companies may present an optimistic future to shareholders in slide decks. But growth until this point has been turbocharged by the abundant risk capital provided by venture capitalists, private equity funds and strategic investors. The total sum of these capital investments in private companies easily exceeds the amount back in the late 1990s. When Amazon went public in 1997, was valued at less than $500 million.

GoTo, Grab and Sea may soon have to prove to investors that they have a sustainable, high-growth business model -- the most important factor in deciding which will become the champion in Southeast Asia's high-stakes tech battle.