SINGAPORE -- After arranging to take Grab public in a deal that values his "super app" company at as much as $39.6 billion, Anthony Tan told his employees the deal merely touches "the tip of the iceberg" in terms of the impact it will have on Southeast Asia.

Singapore-based Grab is one of the region's biggest companies. It offers app-based services from ride-hailing to delivery to finance. Its Nasdaq listing -- now being pushed back to later this year -- will come via a merger with a special purpose acquisition company, or SPAC, under Silicon Valley-based Altimeter Capital, giving U.S. investors exposure to fast-growing but underrepresented Southeast Asian economies.

The delay to the listing was announced on June 9 and drew investor attention as SPACs, also known as "blank check" companies, come under scrutiny. The postponement comes as Southeast Asia's business environment is also changing, with Indonesian archrival Gojek moving toward a merger that likely will bring Grab even fiercer competition.

How the market values the company remains anybody's guess, but one thing is certain: Grab's future greatly depends on the 39-year-old CEO, who will gain 60.4% of the voting rights despite a 2.2% ownership stake after the deal.

The disproportionate amount of control, which Tan might not have been able to obtain had the company taken the traditional IPO route, raises questions: What allows a leader to command so much clout? Will he be able to build confidence among stock market investors, who might harbor governance concerns? 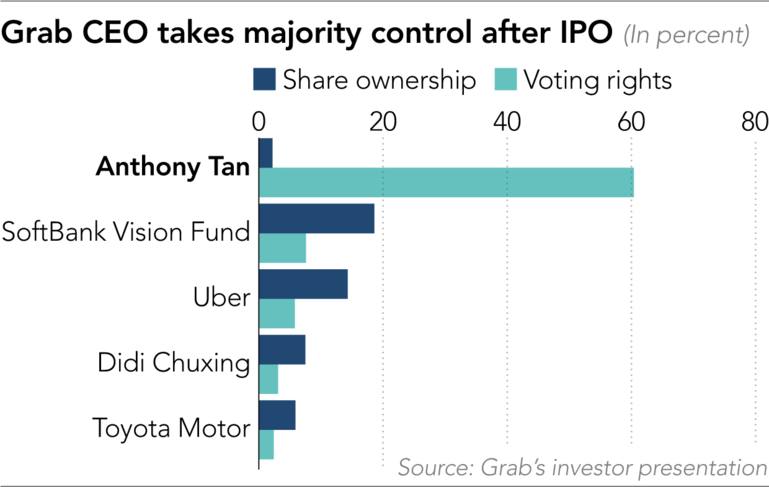 It was nine years ago that Tan founded MyTeksi, a taxi booking startup, in his home country of Malaysia along with Harvard Business School classmate Tan Hooi Ling. He might have had some familiarity with the transportation industry; his family ran Tan Chong Motor, a big automobile distributor in Malaysia.

Tan's ambition was to create a safer and more transparent transportation system in Southeast Asia, where taxis were often seen as dangerous, especially for women, with drivers who were prone to overcharging.

"He was very clear what he wanted to do," Chua Kee Lock, CEO of Singapore-based venture capital Vertex Holdings told Nikkei Asia. "He wanted to be a regional, best, dominant app for ride-sharing."

"He is very humble, has a tremendous capacity to listen and learn, and that has helped him build strong trust with his team and investors over time," said Jixun Foo of GGV Capital, another early investor in Grab, who added that the two co-founders have always made decisions in consultation with each other and the board. Grab battled Uber Technologies for about five years, until 2018, when it traded shares for Uber's business in the region. Grab's pushing Uber out of Southeast Asia was a turning point as it chased its ambition for regional digital supremacy. Soon after the Uber deal, Grab accelerated its "super app" strategy, expanding its forays into deliveries, finance and other businesses.

Another of Tan's attributes is his ability to motivate his employees, from other executives to drivers. Pratyush Rastogi, who now operates his own business, told Nikkei Asia that Tan in internal meetings was "very good at being optimistic and convincing people that the impossible is possible." The CEO sometimes delivers meals, which allows him to sense driver and consumer needs. Grab now has about 5 million "driver partners," key assets who have allowed the company to grow multiple businesses.

Call it charisma. It shows up in Tan's ability to raise funds, execute strategies and build relationships with governments -- a crucial skill when operating a transportation business.

A confluence of circumstances also played into Tan's securing 60.4% of those voting rights -- global markets awash in liquidity, U.S. investors looking to diversify their portfolios away from the U.S., and markets in China and Southeast Asia beckoning them, according to Howard Yu, a professor at Switzerland's IMD Business School. "Probably most investors have been exposed to Alibaba and Tencent," Yu said. "So they need to look at Southeast Asia. And there's just not a lot of good candidates.

"[But] Grab is a great candidate. So they concede. It's all about bargaining power." Founders generally hope to retain a certain amount of control after going public. A strong founder with majority control can make speedy decisions and focus on long-term strategy without being haunted by short-term stock market fluctuations.

For Tan, his majority vote will allow him to go on operating the business in a way that has social impact in Southeast Asia, as he has done since founding MyTeksi.

Tan's desire for strong control surfaced in merger talks with Gojek that collapsed. Nikkei Asia understood that Grab was seeking to make Tan de facto "CEO for life." Other demands included giving Tan sizable voting rights and veto power over board decisions. These demands might have been why the talks went nowhere despite the rationality of the two rivals combining to more efficiently pursue profitability. A video wall shows advertisements for Shopee, the e-commerce arm of Southeast Asia's Sea, at a company office building in Singapore.   © Reuters

The market will be closely scrutinizing Grab as it works toward closing the SPAC merger by the end of 2021.

"There's a risk of entrenchment," said Lawrence Loh, an associate professor at National University of Singapore Business School and a corporate governance expert. He was referring to a situation in which top managers act in ways that benefit themselves and put other investors at risk.

Having a disproportionate share of ownership and voting power under a dual-class share structure is not unusual, especially for startups or family-owned businesses. But Tan's voting power to ownership ratio, at 27.45 (60.4 divided by 2.2), is "very, very high," Loh said.

At Sea -- an online gaming and e-commerce group as well as Grab's regional tech rival -- founder and CEO Forrest Li has a 1.5 ratio. He controlled 37.7% of voting rights and owned 25.1% of the shares as of March, according to the latest annual report released in April. Bom Suk Kim, founder and CEO of Coupang, has a ratio of 7.52. He had 76.7% of the voting rights and a 10.2% ownership stake when the South Korean e-commerce company IPO'd this year. As the company goes public, "the more important challenge [for Tan] is to build confidence with public investors" with good governance and good transparency, Loh said. While Tan has done well as a leader, in "Grab 2.0 ... you have to do it totally differently because you have public investors coming in and subject to the listing rules," Loh said.

When it goes public, Grab will have seven directors, according to the company's IPO document, including co-founders and Uber CEO Dara Khosrowshahi. Tan told Nikkei Asia in April that his company "will keep evolving our corporate governance accordingly to make sure we have a diversified board."

Tan will also have to convince investors that Grab has a path to profitability. The decacorn lost a net $2.7 billion last year and has accumulated losses reaching $10 billion. When it might turn profitable remains a question. Grab faces intense competition from rivals like GoTo and Singapore's Sea, Southeast Asia's most valuable listed company.

The merger between Grab and its SPAC partner was supposed to take place in July but is now set to be completed in the fourth quarter of this year as auditors look into Grab's financials for the past three years. The delay also comes as the SPAC boom loses momentum, with Altimeter Growth's share price dropping more than 20% from its recent peak on April 13, when it announced the Grab deal.

By merging with a SPAC -- a company that goes public with no commercial operations and no other intention than eventually buying an existing company -- Grab took a shortcut to a stock market listing, gained a valuation of nearly $40 billion and allowed its founder to maintain a tight grip on management. "The 'acid test' will come on the first day of trading," Loh said.

"It is a global case of how do we set up the appropriate governance structure among startups. Everyone will pay attention to this."