HONG KONG -- Even though Li & Fung had been a Hong Kong fixture for more than a century, CEO Spencer Fung never anticipated a cushy job when he took over the world's largest sourcing company in 2014.

Still, the problems plaguing the company's sprawling empire, built to connect retailers in the West with manufacturers in the East, have rapidly multiplied.

E-commerce giants like Amazon and Alibaba are squeezing its customers. The trade war between China and the U.S. -- the company's main supplier and largest market, respectively -- is battering supply chains. And the coronavirus pandemic has stifled global manufacturing and consumption.

Against this daunting backdrop, Harvard graduate Fung is now trying to steer the 114-year-old family company in a new direction.

Next week, Li & Fung shareholders will weigh a plan to delist from Hong Kong's stock exchange in a deal valuing the company at HK$10.7 billion. The Fung family would keep voting control but Singapore logistics giant GLP Group would own the majority stake.

The CEO's pitch is that the company will have an easier time plotting its new course without the pressure of being publicly traded. Key to its makeover is creating a digital platform that connects customers and vendors while delving more into data analysis, online order tracking, financing and virtual design.

But investors are unimpressed: The company has lost 95% of its market value since 2011 with its turnover almost halving. "There are great risks from external environments, and efforts made by Spencer and other professional managers so far is far from enough to ward off the challenges," said Joseph P.H. Fan, a professor specializing in family businesses at the Chinese University of Hong Kong. While acknowledging the company's talent, innovation and branding, the sum total amounts to "a mantis trying to stop a chariot," he said.

The contrast between Li & Fung at its heyday and its now-clouded future underscores the massive changes wrought by globalization and China's bursting onto the world stage.

When Macy's needed fillers for Christmas stockings or Victoria's Secret was desperate for silk underwear, Li & Fung used to be the go-to source. But trade and technology have turned the tables on the dependable middleman. Buyers and sellers find each other at the click of a mouse and retailers battle relentlessly for margins.

Rising protectionism has also threatened the company, according to Simon Lee Siu-po, a senior lecturer at the Chinese University of Hong Kong's business school. "Li & Fung needs to adjust its business to adapt to the more complicated global trade rules," he said. Founded in Guangzhou in 1906 before the collapse of China's last imperial dynasty, Li & Fung started out selling porcelain, silk and other handicrafts to the West before moving to Hong Kong in 1937. There it enjoyed rapid growth, reflecting Hong Kong's role in connecting China to the world and America's post-World War II appetite for consumer goods.

Hong Kong billionaire Allan Zeman, founder of Colby International Group -- a fierce Li & Fung competitor from the 1970s before being acquired by the Fungs in 2000 -- recalls how people from around the world gathered in the lobby of The Peninsula hotel to find business partners.

"That's where the deals were done. [The lobby] is the hub of Hong Kong," he told the Nikkei Asian Review.

There, Zeman said he frequently bumped into William Fung, chairman of Li & Fung and Spencer's uncle. "William was the workhorse," he said. Victor, William's elder brother and Spencer's father, was a "thinker," Zeman said. 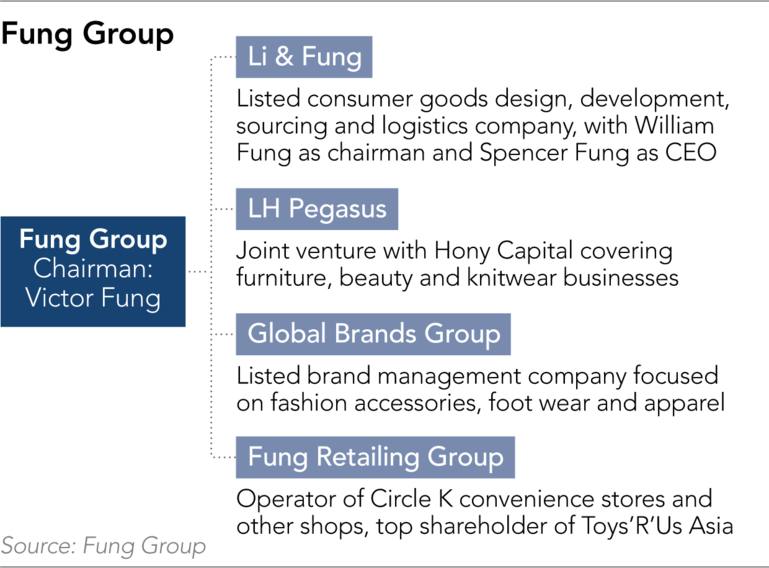 When Li & Fung went public in 1973 its shares were oversubscribed 113 times -- a Hong Kong record it held for 14 years. Its success made it a favorite case study at business schools and propelled the Fung family into prominence in Hong Kong and China, where Victor was a member of China's top political advisory body, the Chinese People's Political Consultative Conference, for 15 years.

Even after e-commerce started to chip away at the company in the early 2000s, Li & Fung still grew for another decade, helped along by acquisitions and China's emergence as an economic powerhouse. Between 2004 and 2014, Li & Fung's turnover more than tripled to nearly $20 billion.

But it soon rapidly declined. In 2019, turnover had fallen by nearly half to $11.4 billion as the retail industry was hit by closures and bankruptcies. Gross margin fell from a high of 15.3% in 2011 to just 10.7% last year. Li & Fung's dealmaking also slowed.

In a blow to the company's reputation, it lost its status in 2017 as one of the 50 constituent stocks of Hong Kong's benchmark Hang Seng stock index. 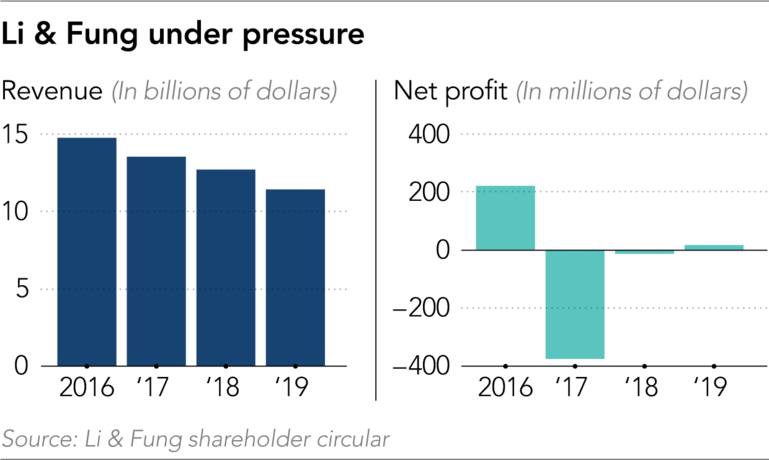 "The company lost a lot of lustre and credibility with analysts and investors because it did not change with the times," said Zeman who sold his 1.7% stake in Li & Fung in 2005 for 886 million Hong Kong dollars. "When you are used to building a company your way and see success every year, sometimes you get high on your own ability. You disregard there is change in the world coming."

Bruce Rockowitz, who co-founded Colby with Zeman, joined Li & Fung in 2001 after it acquired Colby. He went on to become CEO between 2011 and 2014 -- the only non-family member to have run the company. In an interview with Nikkei, Rockowitz said the established brand retailers the company served started to be challenged by smaller rivals due to e-commerce.

"The demand has gone up, but the customers are in different hands," he said. "To keep growing like that has become more and more difficult." Rockowitz, who is still a Li & Fung shareholder, also said it was getting harder to boost growth through acquisitions; what he called the "secret sauce" for Li & Fung's success. The group "has acquired what they can acquire," he said, adding that moves into other sectors would be "risky."

The company's stated strategy is to find a way into the heart of the retail supply chain through technology, such as data analytics and 3D virtual design. When Spencer Fung drew up the group's three-year plan in 2017, "the world was shifting very quickly to somewhere else, and we weren't there," Fung said in a February interview with PwC.

The company's website admits: "We are facing an era of exponential change."

But Li & Fung can't do it alone. Spencer Fung -- the fourth generation at the helm and formerly the founder of a Silicon Valley startup -- wants to persuade longtime partners to transform with it by adopting more digital solutions. Albert Hui, a friend of Spencer of nearly 20 years, told Nikkei: "He actually faces a very big challenge. He's thinking about it every day; how [he] can convince them to upgrade together." But many stakeholders are wary of following the CEO's digital lead, Hui said.

Under the proposal shareholders will consider on Tuesday, GLP will pay HK$7.2 billion for a 67.67% stake in Li & Fung. The Fungs will hold the remainder of the shares and retain 60% of voting rights. While GLP Group has declined to comment on the deal, Li & Fung said the logistic company's business will complement its supply chain expertise and global network.

While the HK$1.25 per share offer by GLP represents a 150% premium to the price before the proposed deal was made public, Li & Fung risks rejection from long-term investors who face losses.

"The privatization proposal looks like an attempt to take advantage of the share price weakness due in part to the U.S.-China trade tensions and COVID-19 outbreak," said Arun George, an analyst with Global Equities Research, in a post on Smartkarma.

Silchester, a London-based investment fund, controls 10.9% of Li & Fung's shares -- enough to block the deal. In an email to Nikkei, Silchester's senior partner Tim Linehan said the company "will consider the offer on its merits at the appropriate time" and is open to bids for the Li & Fung shares it controls. 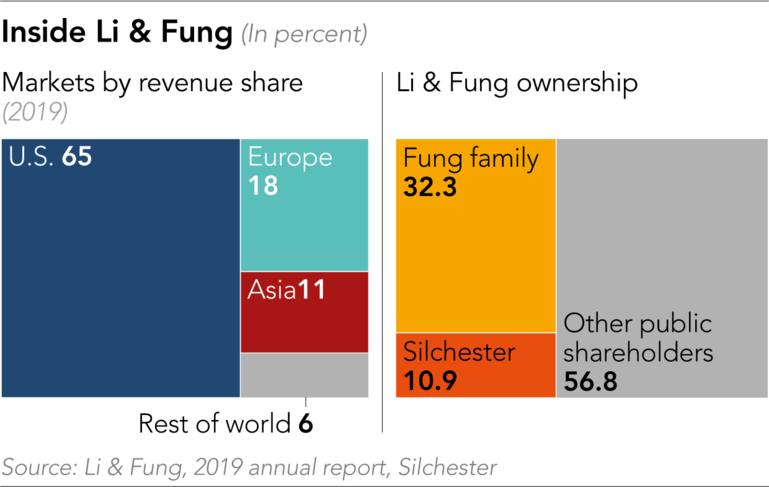 Despite the decline of its core business, the Fungs have an obvious advantage compared to many family enterprises, Fan from CUHK said. As the only fourth-generation family member in a senior role at Li & Fung, Spencer Fung was positioned to avoid bitter family disputes that have encumbered many businesses in Asia, Fan said.

Rockowitz agrees. "They never really ran it as a family business. It was more of a meritocracy, much more."

The governance style is mainly due to the efforts of William and Victor. Both of them were educated in Harvard in the 1970s, and Victor taught there before taking over the family business in Hong Kong.

"The two Fungs have allowed Spencer to focus on his ideas," Rockowitz said, "which is very unusual [among Asian family businesses]."

Even with the blessings of his elders, Spencer faces a tough time returning Li & Fung to its glory days, even if the GLP deal goes through.

"The external environment is much more fluid now," said Fan. "We're seeing a lot of unprecedented events that are more challenging than the previous decades. As a company that benefited from globalization, it's getting a lot harder for Li & Fung to grasp all related risks."