Workers at the Advanced Earthquake Engineering Laboratory in Tokyo, left, are working to limit damage such as that seen at this hospital in northeastern Japan, right, following the huge earthquake that struck the region in 2011. (Source photos by Yuki Kohara and Shinya Sawai)
Business Spotlight

How Japan's builders absorbed the lessons of the 2011 earthquake

TOKYO -- Almost 170 meters into the Tokyo sky, engineers on the roof of a high-rise office building are working to make those sitting at desks in the 40 stories below feel safer.

The "pendulums" being installed in the Yebisu Garden Place Tower will -- hopefully -- not be noticed or even needed. But if an earthquake strikes Tokyo, these 1,350 ton devices will come into their own, making the building more resilient to violent shaking caused by seismic movements.

Kajima, one of Japan's biggest general contractors, with annual sales of 2 trillion yen ($19 billion), is carrying out the work, which is due to end in August next year. It is among the retrofits and building upgrades spawned in the wake of the Great East Japan Earthquake in March 2011, the most violent quake to hit the country in 16 years.

The work is a measure of how even in Japan, the most seismically active nation on Earth, each big and devastating earthquake prompts advances in the technology used to deal with them -- and offers opportunities for innovative businesses to spread their know-how at home and abroad.

The Tohoku quake killed more than 22,000 people, including those presumed to have died in the subsequent tsunami. It also led to a meltdown at the Fukushima nuclear power station.

In Tokyo, some 300 km away, the effects were not devastating, but still dramatic. Buildings packed with thousands of workers swayed alarmingly. "The shaking gradually became bigger and bigger, and we didn't know when it would stop. It was very frightening," said a man in his 60s who was in one Tokyo's innumerable office towers when the quake struck. The shaking lasted for 10 minutes, he said.

The temblor also got the attention of Kajima. "Many people in high-rise buildings felt uneasy," said Haruhiko Kurino, a senior group leader with the company's structural engineering department. "The earthquake brought home to us that we should take actions to make people inside buildings feel safe and secure." 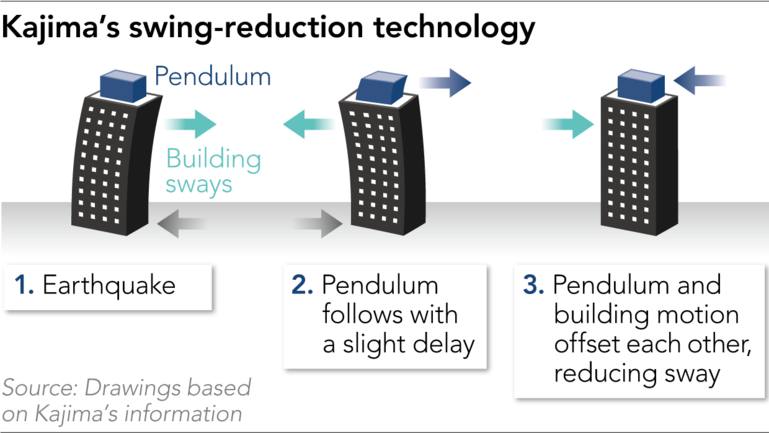 High-rises tend to sway when a big earthquake occurs -- indeed many are designed to do so. Modern skyscrapers are built to be flexible, absorbing rather than resisting an earthquake's seismic energy.

This design principle has been largely successful. Few tall buildings have suffered direct damage or collapsed in Japan, thanks to technological advances since the Great Hanshin-Awaji Earthquake devastated Kobe in 1995, killing more than 6,000 people. In 1981, building standards were made much tougher; they were made still more stringent after the 1995 Kobe earthquake.

But while technologies have been developed to prevent buildings from being flattened in quakes, little attention had been paid to reducing their sway, Kurino said.

As a result many people in Greater Tokyo were injured by falling objects and fixtures. The swaying in tall buildings often lasts for more than 10 minutes in a big earthquake and can make people feel seasick.

The rooftop damper that Kajima developed in 2013 is a response. It was introduced in Tokyo's 55-story Shinjuku Mitsui Building at a cost of 5 billion yen. Because the dampers installed on rooftops, tenants are able to keep operating during a retrofit. This is cheaper for tenants and building owners than installing a seismic control system inside the building.

The mechanism is simple. Pendulum-type weights are installed on the rooftop. In the event of an earthquake, the weights swing along with the building, but with a slight delay. In this way, they absorb the vibrations in the building, significantly reducing the undulation.

Several real estate developers are considering introducing the devices and are in talks with Kajima.

Yuto Ohigashi, senior director of research at JLL, a real estate services group, said additional earthquake resistance technology can make a building more attractive to tenants. This will be key in the post-COVID era. Demand for office space is expected to fall, forcing building owners to compete harder for tenants.

"Buyers are picky now," Ohigashi told Nikkei Asia. "As buyers seek more quality and safety, it is crucial for owners of old buildings to update their quality to stay competitive." JLL estimates that real estate investment totaled $22.7 billion in Tokyo in 2020, compared with $18.9 billion the previous year, making it the world's third-most active market after Paris ($23.1 billion) and London ($22.8 billion).

Kajima is not alone in seeking to improve earthquake resistance for better building safety -- and new business opportunities. Shimizu, another big Japanese general contractor, with annual sales of 1.7 trillion yen, began developing a new type of ceiling that is more resistant to earthquakes a year after the 2011 earthquake.

Suspended ceilings common in Japanese buildings have space for equipment such as lighting, air conditioning, and water pipes. But they have been a weakness. During the 2011 quake, some people were hurt when such ceilings collapsed. In some factories, fallen ceiling panels damaged or destroyed production equipment. The most advanced large-scale earthquake simulators in the world, E-Beetle and E-Spider, are located at the Advanced Earthquake Engineering Laboratory in Tokyo. (Photo by Yuki Kohara)

"It is becoming more important for corporate Japan to adopt more earthquake-resistant ceilings, in terms of business continuity," said Tetsuya Hanzawa at Shimizu's center for safety and reliability engineering.

Shimizu's new ceiling is designed to withstand earthquakes measuring 5 on the Japanese scale of seismic intensity -- a medium-size quake. The company invests around 10 billion yen annually in research and development, part of which is spent on creating new earthquake resistance technology.

Mori Building, one of Japan's biggest commercial developers, with annual sales of 250 billion yen, is broadening its approach to building safety. Since the1995 Kobe earthquake, Mori Building has developed technologies on the "hard" side: helping buildings stand up better to quakes. In 2003, the company's landmark 54-story Roppongi Hills office complex was equipped with oil dampers to absorb seismic vibrations. It suffered no major damage during the 2011 earthquake.

But the mega-quake offered an opportunity to look at other aspects of earthquake preparedness, the company told Nikkei Asia. In 2013, The developer came up with an earthquake damage projection system to detect quake damage that cannot be confirmed visually. Sensors placed at various levels of a building analyze the seismic intensity and the speed of shaking to estimate damage.

The system allows tenants reopen their businesses quickly and keeps disruption to a minimum. As for Mori Building, which also manages the properties, "We can allocate human resources to the most severely damaged areas as quickly as possible, which allows for an efficient response," said a company representative.

Also, Mori Building has devoted more attention to the "softer" side of earthquake mitigation, helping those whose lives are disrupted by an earthquake. In the basement of Roppongi Hills, a storage space equivalent to a 25-meter swimming pool is piled with cardboard boxes containing 100,000 emergency food rations and supplies such as blankets. "We must respond to social issues, such as stranded people," the company representative said. In the basement of Roppongi Hills a store room is piled with cardboard boxes containing 100,000 emergency food rations and other supplies. (Photo courtesy of Mori Building)

On the day of the 2011 earthquake, many Tokyo commuters were forced to walk home as trains were out of service for hours. If a major earthquake centered on the city hits, it is estimated up to 7.2 million people could be stranded. Mori Building is ready to offer a few of them refuge.

Developers and contractors hope their earthquake resistance technologies will find their way to other parts of Asia. Indonesia, the Philippines, and Taiwan, for example, are also in very active seismic zones and experience big earthquakes quite often. The Japanese government has been helping India and Bangladesh implement stricter building codes based on the Japanese experience, which could create more opportunities for Japanese companies to sell their expertise abroad.

"I see a growing demand to improve building security in Asia," said Kajima's Kurino. "We want to grab the chance to offer our technology, which is suited to local needs."