Gaming and shopping are two of the pillars on which Forrest Li has built Sea. (Source photos by Kentaro Iwamoto and Ken Kobayashi)
Business Spotlight

SINGAPORE -- When Apple founder Steve Jobs gave a famous speech to a class of Stanford students in 2005 -- exhorting them to "stay hungry, stay foolish" -- one of those he inspired was Forrest Li.

After hearing Jobs that day, the China-born MBA student later watched the video "two to three times a day for a month" before jumping into the startup world, he said in an interview with Nikkei Asia.

Fifteen years on, 42-year-old Li's startup is the most valuable listed company in Southeast Asia. Singapore-headquartered Sea, which operates online gaming, e-commerce and digital financial services, is among the biggest beneficiaries of the COVID-19 pandemic, which has given a boost to online services across the world.

The market capitalization of New York-listed Sea has more than quadrupled since the beginning of this year to over $70 billion, surpassing the region's traditional banks like Indonesia's Bank Central Asia ($45 billion) and Singapore's DBS Group Holdings ($37 billion). The growth in its stock price has outstripped even other clear winners from the coronavirus crisis such as Amazon (about 60% up) and Alibaba Group Holding and Tencent Holdings (up around 30%).

Li, now Sea's CEO, said the digitalization driven by the pandemic is "positive" for the Southeast Asian economy. He said his company will continue to aggressively capture untapped opportunities in the region and beyond. "We don't want to compromise our growth potential," he said. Sea hosted a worldwide competition on its Free Fire app in Brazil in late 2019. (Courtesy of Sea)

The rapid expansion, however, comes with massive expenses. While Sea's revenue for the April-June quarter doubled to $882 million from a year ago, the net loss widened by 40% to $393 million. With Southeast Asia increasingly becoming a battleground for digital upstarts, from local "superapps" to Chinese tech, Sea's ability to navigate the already competitive market in the post-pandemic world is being tested.

Sea's core business is online gaming, which has 500 million active users globally. Its title Free Fire -- a multiplayer online survival game -- became the most downloaded app in the world last year on Google Play and iOS combined, according to App Annie.

Free Fire, initially released in 2017, was Sea's first self-developed game and was born from deep understanding of Southeast Asian markets, Li said. It is designed for a relatively weak mobile internet environment and lower-end smartphones. The playing time for one game is 10 to 15 minutes, shorter than the 20 to 30 minutes typical of games in the same genre, it limits the maximum number of players per game to 50, and it does not pursue high-quality graphics, in order to reduce data volume. 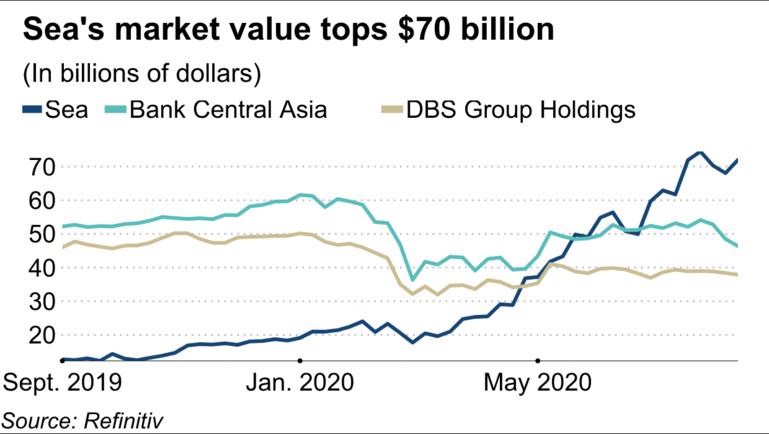 "We have been operating different types of games with different game developers in Southeast Asia. So over the time, we accumulated a lot of know-how and insights on what gamers like here," Li said.

Thanks to Free Fire, Sea's gaming segment generated an operating profit of $167 million for the April-June quarter. Li said the game will continue to contribute to earnings for years. "We do believe Free Fire will be a ... decade long," he said, pointing out that typical life cycles of popular games are at least five years.

Earnings from the gaming business helps the company make investments for its e-commerce business, better known as Shopee, which now is the most visited online shopping platform in many Southeast Asian countries.

Sea is also tapping into digital payment and other financial services, seeking synergy with its shopping and gaming pillars and building a strong regional internet services platform. E-payment is an "infrastructure" of the digital economy, Li said, adding that opportunities are "at least as large as e-commerce's" for the region.

One of Sea's digital payment services, ShopeePay, has become big in Indonesia. Only a year ago, shopping malls in Jakarta were awash with the country's two leading e-wallets -- Gojek's GoPay and Grab's local partner, OVO -- touting huge cashbacks, but now ShopeePay is replicating the strategy to attract customers.

In Singapore, Sea is seen as one of the leading contenders for one of five digital banking licenses to be awarded by the end of the year. If it wins a license, it will be able to take deposits and offer loans to retail and corporate customers -- an important step in its plan to expand digital financial services in the city-state by capitalizing on its huge e-commerce and gaming base. 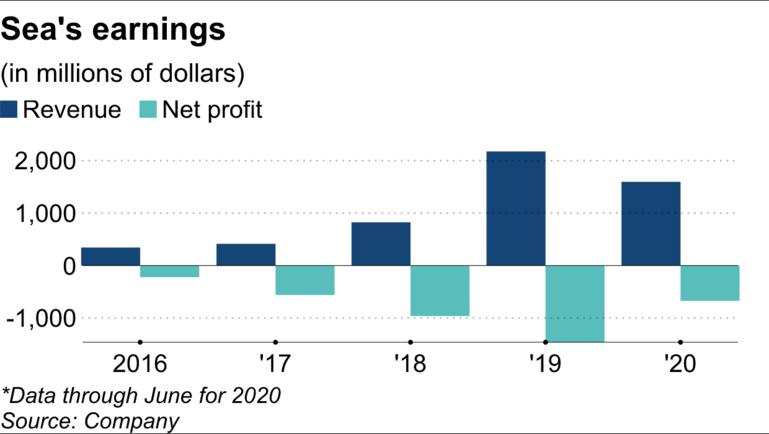 Li suggested Sea's high valuation is due to its mix of gaming, commerce and finance -- something already shown by Chinese online giants like Alibaba and Tencent.

Investors' high expectations also come from the fact that Sea is operating in Southeast Asia, which has 650 million people and still has plenty of growth opportunities compared to the U.S. or China due to lower penetration of digital services.

"There is clearly plenty of headroom to grow given the correct strategy," said Justin Tang, head of Asian research at United First Partners in Singapore, noting that the region's internet penetration rates still lag behind those in North America and many other regions.

When asked about the region's post-COVID economy, Li said the pandemic "could be an opportunity for Southeast Asia." He said, "With the transformation to a digital economy being accelerated, I think that's a very positive thing for the Southeast Asian economy."

As such, Sea will continue to prioritize growth in revenue and market share over profitability, according to the CEO.

"I believe growth is the most important thing," Li said. "Every day there are more people just becoming the first-time users of e-commerce. We want to capture all these opportunities and make sure we can grow with the market and grow faster than the market."

Li, who now has Singapore citizenship, moved to the city-state after graduating from Stanford -- following his future wife after they met at the U.S. university. 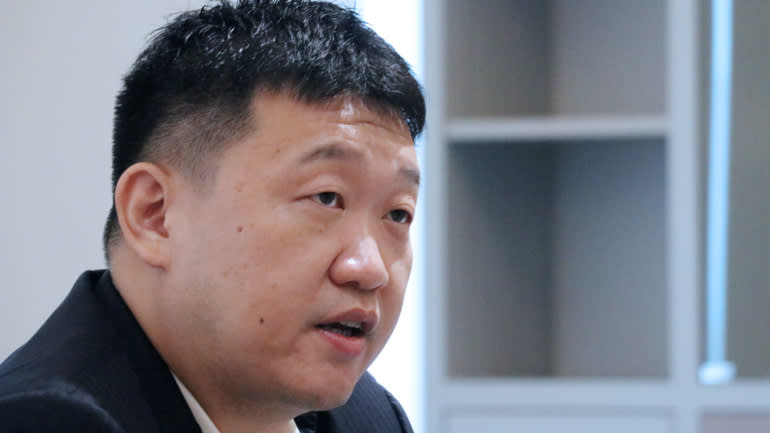 His life before Stanford was far from entrepreneurial. Working at established international companies, including Motorola in China, "At that time I did not know much about entrepreneurship," he admitted.

But the Stanford MBA experience -- meeting successful people from the business and public sectors -- inspired him. "Through those conversation, somehow I felt more related to the entrepreneurs who came to the class, " he told Nikkei Asia.

After failing with one gaming startup in Singapore, he established another gaming company, Garena, in 2009, which remains at the core of Sea. The following year the company received the first of several rounds of investment from Tencent, which was seeking opportunities outside China. Big institutional investors, including Canada's Ontario Teachers' Pension Plan, have also invested. In 2017, Garena was rebranded as Sea -- for South East Asia -- and listed on the New York Stock Exchange.

Li had 25.4% of the company's shares as of March, which translates into 38.8% of voting power, according to the latest annual report. His net worth has reached $8 billion, according to Forbes.

In the long term, Sea will continue to focus on its three digital segments, Li said. "At this moment, we don't think we are going to do any other businesses," he said, adding that they are the most important elements of the digital economy.

He also sits on the Economic Development Board of Singapore, a government agency to foster business in the city-state, to share his experiences with younger entrepreneurs.

In terms of geography, he said Sea is considering bringing its Southeast Asia experiences to other emerging markets. Indeed, Free Fire is already popular globally, especially in Latin America, Russia and India, he said.

Noting that the company's mission is to better the lives of consumers and small businesses through technology, he said that "What we are very good at is the specific understanding of how technology can be applied to the businesses that we operate, and especially in an emerging market." 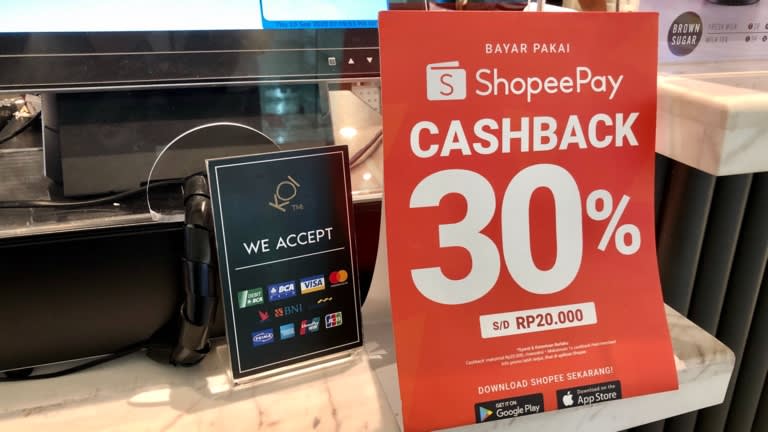 Sea's rapid growth is remarkable at a time when some of Southeast Asia's digital startups have been grappling with the pandemic. The region's two most prominent -- Singapore's Grab and Indonesia's Gojek, known as "decacorns" for their private valuations in excess of $10 billion -- were forced to streamline themselves due to a slump in their core ride-hailing businesses, cutting staff by 5% and 9%, respectively.

Yet Sea's aggressive growth entails risks. The company has continued to make big losses -- $1.46 billion of net loss for all of 2019 and $674 million for the first half of 2020 -- due to its massive marketing expenditure in e-commerce and digital payments.

During the interview, Li said his company "can be profitable by any time" by reducing its marketing costs. But intensifying competition with e-commerce rivals is likely to put further pressure on Sea to burn through cash. Rivals include Alibaba subsidiary Lazada, which also operates across Southeast Asia, as well as SoftBank Group-backed Indonesian unicorn Tokopedia and Vietnamese rising star Tiki.

"E-commerce profitability can be achieved if [the company] is less aggressive in acquiring customers. However, [it] is focused on gaining market share even at the cost of profitability so marketing cost may not be reduced in the near term," Sachin Mittal, technology analyst at Singapore's DBS Group Holdings, told Nikkei Asia.

When it comes to digital financial services, Sea's penetration is relatively low compared to some regional players, and Chinese tech giants like Alipay operator Ant Group -- which is preparing for a blockbuster initial public offering in Hong Kong and Shanghai this month -- have been investing a lot in the region, meaning Sea will have to keep spending to gain market share. 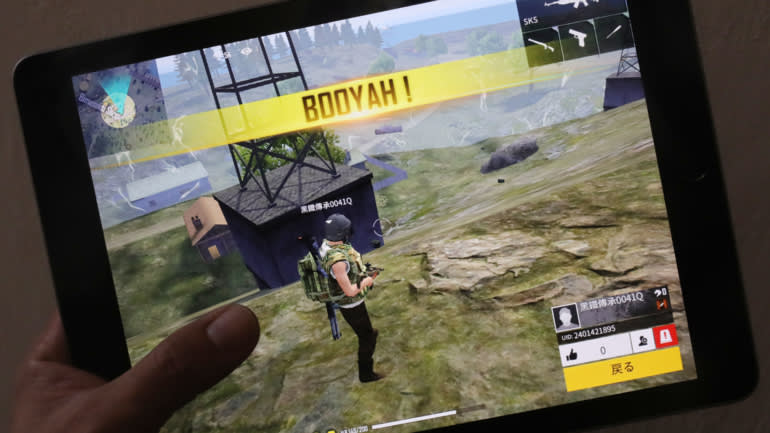 Mittal pointed out that Sea's e-commerce and digital financial services segments are expected to continue to report losses "for another two years due to the intense competition" on a basis of adjusted earnings before interest, taxes, depreciation and amortization.

With respect to the relationship with Tencent -- which owned 25.6% of shares as of March, making it the major shareholder -- Sea has a right of first refusal to publish Tencent's game titles in key markets in Southeast Asia.

Asked whether Washington's increasing sanctions on Chinese tech companies amid bilateral tensions would potentially have some impact on Sea, Li said there is no impact at all.

"We are a Singapore company and listed in New York," he said. "Tencent has invested in many companies globally, and we are just one of them."

Additional reporting by Shotaro Tani and Ismi Damayanti in Jakarta.