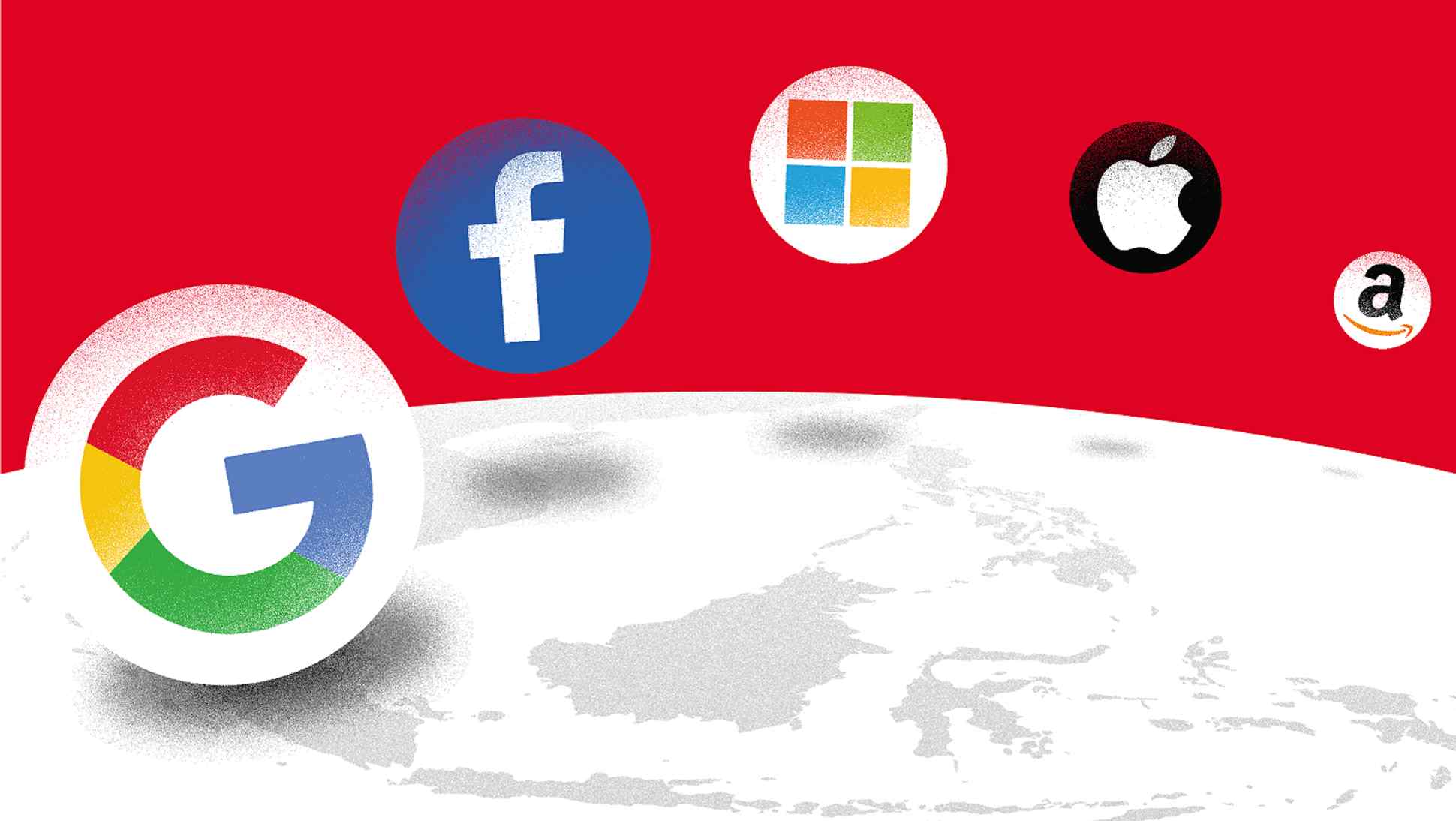 Indonesia's unicorns lure US tech giants from Google to Facebook

JAKARTA -- For the major U.S. tech companies, 2020 showed that Indonesia is shaping up to be the next frontier.

Despite the disruption caused by the coronavirus pandemic, the likes of Facebook, Google and Microsoft have cut a swath of deals to invest in the archipelago's unicorns -- private companies valued at over $1 billion. Investments in companies such as Gojek, Indonesia's largest tech company, as well as e-commerce platforms Tokopedia and Bukalapak this year are set to reach hundreds of millions of dollars.

Just as the same U.S. tech companies, sometimes grouped under the acronym GAFAM along with Amazon and Apple, are also betting big on India, the investments acknowledge that Indonesia is a market too big to ignore. The Southeast Asian country is the fourth most populous in the world, accounting for a third of the region's economic output.

The importance of the investment opportunities is even greater now that China, Asia's largest market, seems a more hostile territory for U.S. tech companies because of Beijing's spat with Washington.

Tokopedia and Bukalapak became the latest recipients of U.S. tech money in November. Microsoft announced earlier in the month it had made a "strategic investment" in Bukalapak, with the American software provider taking part in a reported $100 million funding round alongside existing investors GIC, Singapore's sovereign wealth fund, and PT Elang Mahkota Teknologi, or Emtek Group, a local media conglomerate. Microsoft and Bukalapak, one of Indonesia’s leading e-commerce platforms, have formed a strategic partnership in the country.  (Screenshot from Microsoft Indonesia's website)

Google invested in Tokopedia, alongside Singapore's Temasek, in late October or early November, according to filings made to Indonesian authorities. Both investors are said to have pumped $350 million into the e-commerce platform.

The investments follow Facebook's and PayPal's cash injections into Gojek in June. Google is already an investor in the ride hailer-cum-superapp, which offers services from payments to food delivery and logistics.

The investments are testament to how far Indonesia has come in terms of its digital ecosystem, and to its growth potential. Its internet economy has grown more than fivefold in five years to be worth $44 billion in 2020, by far the biggest in the region, according to a report by Google, Temasek and Bain & Company. The market will be worth $124 billion in 2025, according to the report, further cementing the archipelago as the region's top digital economy.

Investing in established startups like Indonesia's unicorns is "a great opportunity, with one significant transaction, to build [a strong] position in the ecosystem [rather] than just gradually building the business organically," said Hanno Stegmann, partner and director at BCG Digital Ventures.

It allows the U.S. firms to "establish a clear position in the ecosystem, and of course from that, expanding the business presence with a way stronger footprint on a relationship basis," Stegmann added.

A case in point is Facebook's investment in Gojek, alongside PayPal. When the Indonesian company announced the funding, it said the focus was on "supporting payments and financial services." Gojek's payment app GoPay is one of the country's most used digital wallets.

But it also comes with Facebook pushing its own payment ambitions through its WhatsApp subsidiary.

While WhatsApp is already a popular method of communication in the archipelago, Gojek has more payments expertise -- and it also has a better understanding of local nuances in a country that spans 5,000 km, 17,000 islands and 1,300 ethnic groups.

"This investment will support Facebook and Gojek's shared goal of empowering businesses and driving financial inclusion across the archipelago," said Matt Idema, WhatsApp COO, when Facebook announced the investment. "Together with Gojek, we believe we can bring millions of people into Indonesia's growing digital economy." A customer uses a smartphone to scan a Go Pay code in Jakarta. The Gojek payment app is one of the country's most used digital wallets. (Photo by Kosaku Mimura)

India could offer a sign of things to come. WhatsApp's payment service launched in the world's second most populous country on Nov. 6, following Facebook's $5.7 billion investment in digital services provider Reliance Jio Platforms in April. While the U.S. company's investment in Gojek has so far yielded little, a collaboration between both payment firms seems inevitable down the road, much as WhatsApp Pay is expected to play an important role at Reliance's e-commerce grocery retailer JioMart.

Increased collaborations with local tech giants may provide the U.S. tech companies a leg up in their earnings in the region. Facebook, for instance, counts Asia-Pacific as its largest user base in terms of monthly active users, accounting for 42% in the third quarter of this year. However, the region accounted for 19% of the revenue in the same period. Similarly, Google only made 18% of its revenue in the Asia-Pacific region in the nine months ended in September.

Jefrey Joe, co-founder and general partner at local venture capital Alpha JWC, credits Singapore's Sea Group for putting "Indonesia on the map" for the U.S. investors. Sea, listed on the New York Stock Exchange and now the most valuable listed company in Southeast Asia, "has done a favor of educating the market, showing Southeast Asian companies can be good companies, growing, [and have] strong fundamentals."

Sea's e-commerce arm Shopee is the most visited online shopping platform in Indonesia, and the archipelago is the biggest market for its digital wallet arm SeaMoney. Its share price has more than quadrupled this year.

The interest shown by U.S. tech companies is also a welcome development for the Indonesian unicorns.

For one, the capital is a blessing. While the general atmosphere surrounding startups nowadays is one of frugality, competition remains intense, driving the unicorns to seek bigger war chests. COVID-19 has increased the need for capital among companies that have faced disruptions or want to expand in some areas to capture changing consumer behavior.

U.S. tech investment also allows Indonesian unicorns to raise their profile among global investors, something that will be much needed if and when they decide to go public outside Indonesia -- perhaps via a dual listing in a foreign market.

In addition, alternative sources of capital are limited for companies that have been around for some 10 years and grown to the scale they have. Gojek is valued at $10 billion, Tokopedia at $7 billion and Bukalapak at $3.5 billion, according to CB Insights.

"Not many people can write those checks," Joe of Alpha JWC said, "and conventional [investors] might not be comfortable with the valuations."

That has opened an opportunity for the U.S. tech heavyweights willing to splash the cash to step in, Joe said. "Most importantly, [the big U.S. companies] understand the game. They understand what these unicorns are building because they have gone through [the same process]."

Parts of GAFAM started to venture into Indonesia around five years ago. In 2016, Apple announced a $44 million investment to establish a training center for app developers on the outskirts of Jakarta. The academy, completed in 2018, was the company's first in Southeast Asia.

But the investment was more of an entrance ticket into Indonesia's smartphone market rather than a direct bet on Indonesia's digital economy. It allowed Apple to comply with a government requirement that phones sold in the country had to have a minimum amount of locally produced content or components.

The first real bet on Indonesia's digital economy and its growing startups came in early 2018, when Google invested in Gojek, Indonesia's biggest startup, with the Mountain View-based company now holding 7% of the company's shares. Later in the year, Microsoft invested in Grab, Gojek's Singapore-based rival whose largest market is Indonesia.

Should both Southeast Asian companies decide to merge -- talks have reportedly advanced -- the U.S. firms will have a stake in a regional tech behemoth spanning eight high-growth countries. Gojek and Grab drivers in Indonesia in February. The two companies are fierce rivals in Southeast Asia's largest economy. (Photo by Ken Kobayashi)

There is a need to "lock in certain big customers, and to build credible use cases and to build the credibility in the ecosystem. That's why this investment strategy is very smart," said Stegmann.

Chinese companies are also covetous of the segment. Alibaba Group Holding has two data centers in Indonesia and plans a third next year, according to reports.

Both Gojek and Tokopedia currently use Google Cloud, while Bukalapak switched from Google to Microsoft's Azure after Microsoft's investment. 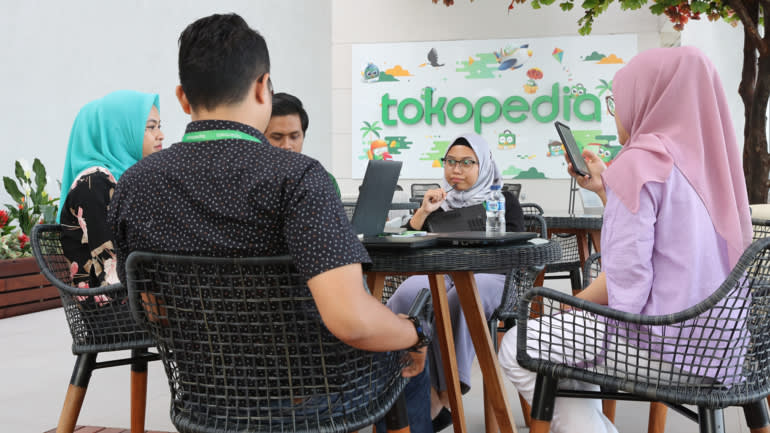 Tokopedia workers are seen at their HQ in Indonesia in 2019. Google invested in the company this year. (Photo by Kosaku Mimura)

"At the end of the day, it is normal" to switch to Microsoft's service, said Rachmat Kaimuddin, Bukalapak CEO. "If you get married, you basically try to find synergies within the family," he said.

Amazon, which was previously in talks with Gojek to invest in the company, also has plans to build data centers in the archipelago.

Boston Consulting Group said in a report last year that Indonesia was "one of the fastest-growing [cloud] markets in the APAC region, with a projected compound annual growth rate of 25% over the next five years, from $0.2 billion in 2018 to $0.8 billion in 2023." Data use is exploding from the popularization of e-commerce and food delivery services as a result of the coronavirus pandemic.

The country is already the region's biggest internet economy, more than twice the size of No. 2 Thailand, but internet penetration is the lowest among the ASEAN-5 nations.

That could soon change, however, with the completion last year of the government's $1.5 billion Palapa Ring project, which wires all of Indonesia's islands into a fiber-optic network. The unicorns are also branching out to rural areas, creating more data. Bukalapak, for example, is helping the digitization of mom and pop shops -- warungs in the local parlance -- in far-flung places. Company CEO Kaimuddin said he can see a future in which the data generated through the digitization of warungs is equivalent to that generated by its e-commerce platform.

Indonesia has also been a beneficiary of the trade spat between the U.S. and China, with investors now weary of the risks related to anything Beijing related. Investment into Asia, therefore, is more likely to head toward India and Indonesia, the next biggest markets.

Indonesia has the bonus of a nonalignment foreign policy -- making it a relatively neutral ground for investment as compared to India, which has its own antagonistic relationship with Beijing.

Data from Preqin shows that the number of venture capital deals in Indonesia with direct participation from U.S.-based investors nearly doubled in 2019 compared to 2016, while the deal value in the same period more than doubled. 2020 may also see the number of deals overtake 2019 figures.

Even if U.S. president-elect Joe Biden decides to strike a more reconciliatory tone with China, "the way investors think about investments in Asia has definitely changed," Joe of Alpha JWC said. "Investors are thinking more about diversification, thinking about concentration risk.

"That is why some of the larger investors think ... it is the right time [to invest in Indonesia] because the size already justifies the resources that they want to deploy, the attention that they want to put to this market. That is a good signal for Indonesia."