A culinary icon in the Philippines, Jollibee was hoping to open 600 stores this year, over half of them overseas. But the the coronavirus pandemic has put those plans on hold. (Photo by Cliff Venzon)
Business Spotlight

US acquisitions continue to weigh down Philippine fast-food empire

"Since the start of Jollibee Foods 40 years ago, I have always dreamed [for] it to be the largest food company" on the planet, Tan Caktiong told shareholders in June 2018, explaining his decision buy struggling Denver-based hamburger chain Smashburger.

But after upping the ante in 2019 with the purchase of California-based Coffee Bean & Tea Leaf Co., and going up against the likes of international powerhouses such as Starbucks and Dunkin' Donuts, Tan Caktiong's dreams have met with a harsher reality.

Not only are both U.S. acquisitions still losing money, but the coronavirus pandemic has blown a gaping hole in Jollibee's 2020 revenue forecasts.

Shares in Jollibee Foods have plunged 25% this year, forcing the company to drastically rethink its global expansion plans.

"My biggest concern on Jollibee Foods Corporation is that the COVID-19 situation exacerbates things for Smashburger and CBTL and pushes back their break-even periods versus what management internally expects," Renzo Candano, analyst at Daiwa Securities, told the Nikkei Asian Review. 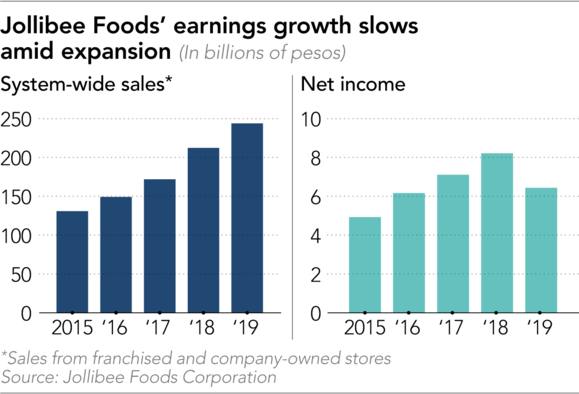 Since January 2019, investors have wiped nearly $4 billion from Jollibee's market capitalization -- around 55% of the company's value -- as the two money-losing U.S. acquisitions squeezed profit margins to an 18-year low, according to FactSet data.

Jollibee's current market value of $3.2 billion puts it in the 18th spot in the ranking of the world's largest restaurant companies, according to FactSet, a far cry from the top-five position that Tan Caktiong hopes to land.

Of key concern to investors was Jollibee's acquisition of loss-making Coffee Bean, which has over a thousand outlets in 27 countries, last year for $330 million, and its 2018 decision to up its 40% stake in struggling Smashburger to 100%.

Jollibee had looked to turn those assets around in 2021, but the pandemic has cast new doubts on those goals, with Coffee Bean and Smashburger continuing to burn cash.

Restaurant reservations and visits in many U.S. states started plummeting in February and fell to zero in April, according to data compiled by OpenTable, U.S. restaurant booking service.

In March alone the industry lost over 3 million jobs and $25 billion in sales, according to the National Restaurant Association, an industry lobby group, which has called for a government rescue.

"This will make it even tougher for management to get them (Smashburger and Coffee Bean) to profitability," Raymond Franco, vice-president and head of research at Manila brokerage Abacus Securities told Nikkei. "So, I think expansion plans will be on hold for at least the next year or two."

Further trouble awaits at home where a strict lockdown announced by President Rodrigo Duterte across Luzon island, the Philippines' economic engine, will likely throw the country into recession.

"There is strong correlation between Jollibee's revenues and profits and gross domestic product," Franco said.

Franco expects up to $600 million in system-wide sales losses for Jollibee during the lockdown, and even a recovery in the second half is "unlikely to offset a significant portion of the lost sales."

Pia Magalong, consumer analyst at Regina Capital Development, a local brokerage, said the consumer sector in the Philippines will be especially hard hit.

"We are looking beyond 2020 before Jollibee returns to normalcy," said Magalong, adding that she expects core earnings to be lower this year.

According to Magalong, people will continue to observe physical distancing even after the lockdown, posing a challenge for restaurants hoping to see a pickup in foot traffic.

"I think we are seeing a shift in consumer behavior -- more home-cooking and food delivery. I don't think this trend will end after the lockdown is lifted," Magalong said. Overall sales, meanwhile, rose 14.9% to 243.79 billion pesos after absorbing Coffee Bean onto its books. As of February, the company had 3,317 stores in the Philippines and 2,664 abroad.

In further a sign of its downbeat prospects for this year, Jollibee has slashed its capital expenditures to 5 billion pesos from a record spending program of 14 billion pesos.

Jollibee had planned to open 600 stores this year, more than half of them overseas, a move that would have made 2020 the first year in the company's history when its international business generated greater organic store expansion than in the Philippines.

While meeting that target might have calmed some critics, Franco believes Jollibee had no choice but to preserve liquidity amid the crisis.

For Jollibee's founder, Tan Caktiong, the son of poor immigrants from China's Fujian province, overcoming the pandemic looms as one of the biggest challenges of his career.

Starting out on just a dream in 1975, Tan Caktiong founded Jollibee as an ice cream parlor in downtown Manila.

In the nearly five decades since, he has turned it into an unlikely phenomenon that has captivated Filipino tastes -- and baffled foreigners -- with an idiosyncratic mix of sweet-sauce spaghetti studded with hot dog pieces and chunks of ham, and hamburgers enhanced with sweet ketchup-mayo dressing. Tan Caktiong first tasted international success by opening outlets in countries with large Filipino communities, especially in the U.S. and the Middle East, but that expansion has continued across Asia with the acquisition of China's Yonghe King and Highlands Coffee and Pho24 in Vietnam.

While it is often referred to as the "McDonald's of the Philippines," Jollibee's flagship brand outsells all American rivals at home, including the Golden Arches.

Together with its sister brands that include Red Ribbon bakeshop, Greenwich pizza chain and the local Burger King franchise, today Jollibee controls over half of the Philippines' $5 billion fast-food market.

Still, despite dominating the domestic quick-service restaurant sector market, Jollibee has struggled to shield itself against the pandemic.

One potential bright spot is China, where Jollibee is back on its feet after temporarily closing 107 of its 342 stores at the height of the coronavirus there in February, according to a report to the Philippine Stock Exchange earlier this month.

And while dine-in services at most U.S. outlets have been suspended, Jollibee has moved quickly to capitalize on the surge in demand for home-delivery.

"While the COVID-19 pandemic has brought unprecedented disruption to our operations in the Philippines and other parts of the world, we are already planning for the full restoration of our operations," Jollibee CEO Ernesto Tanmantiong, the founder's younger brother told the stock exchange. "We expect growth to resume even if gradually, driven by our delivery, take-out and drive thru business channels."

Some analysts also argue that while the virus has wreaked havoc on the food service industry generally, with falling restaurant valuations and rising bankruptcies, the current crisis could also present buying opportunities.

Jollibee has previously stated that it wants to have six brands in the U.S., and that the company remains on the hunt for affordable assets which it can grow.

"If Jollibee's management is still in acquisition mode, which might be the case, now might actually be a good time for acquisitions because the COVID-19 situation may lower the valuations of some restaurant brands on the market right now," Daiwa's Candano said.

While much of the attention on Jollibee's U.S. operations has focused on the $540 million outlay for Smashburger and Coffee Bean, Jollibee's foray into Mexican concept dining in 2018 shows that the company is also prepared to grow smaller businesses. A Smashburger outlet in Manhattan. Jollibee is yet to turn around the Denver-based burger chain that it took over in 2018. (Photo by Cliff Venzon)

After paying $12.7 million for a 47% stake in Tortas Fonterra, a restaurant founded by celebrity chef Rick Bayless, Tan Caktiong and Bayless teamed up to launch the Tortazo restaurant in Chicago in February with plans to add another in New York next year.

Analysts also point to Jollibee's decision in 2018 not to engage in a bidding war for British sandwich and coffee chain Pret a Manger -- which was eventually sold to JAB Holdings for $2 billion, twice the $1 billion that Jollibee said it was prepared to pay -- as a sign that Tan Caktiong had not got too carried away.

Overall, said Candano, Jollibee has a healthy balance sheet, which it shored up earlier this year with a $600 million bond issue, the first time it had tapped capital markets since its initial public offering in 1993.

Abacus Securities' Franco noted that while the opportunity for cheap assets was "plausible," the case for major new acquisitions in the U.S. remained weak.

"Any asset that might become available at a cheaper price will probably be cheap for a reason," said Franco. "My view is that Jollibee doesn't need another headache at this point and management is still smarting from the huge hit to the share price after acquiring CBTL."

Jollibee did not respond to a request for comment from Nikkei, but in an April 7 report to the stock exchange, Tanmantiong said Jollibee was hoping customer loyalty would help restore revenues once the pandemic receded.

"We believe that our consumers will continue patronizing strongly our products and services, once constraints related to the control of the COVID-19 are lifted," Tanmantiong said.