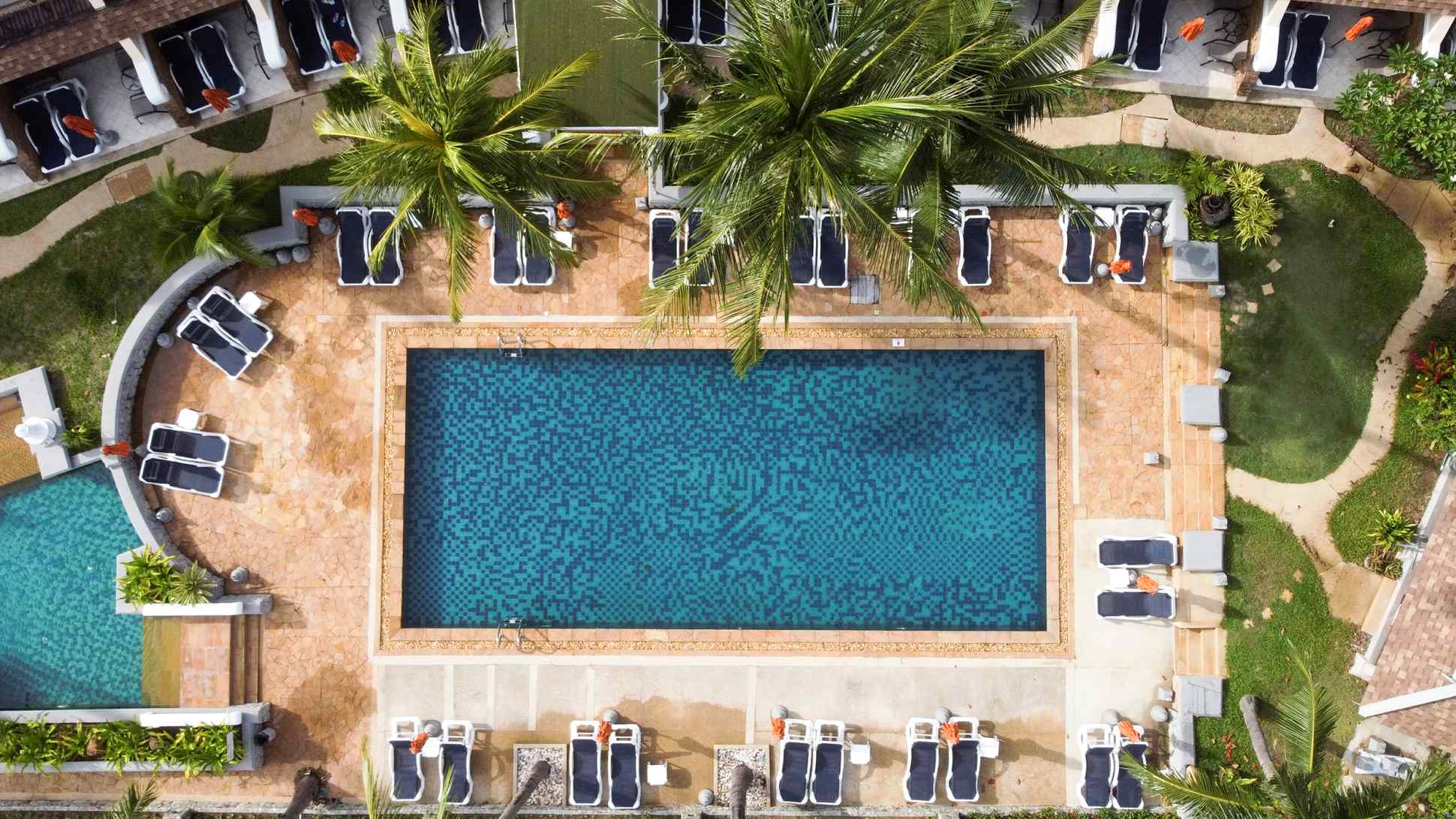 Businesses in Phuket -- like this resort -- and Bali are devoid of foreign tourists, who were once the lifeblood of the local economy.   © Reuters
Business Spotlight

Plans for ring-fenced 'sandboxes' and 'green zones' to revive economies

BANGKOK/JAKARTA -- Clear skies, emerald blue seas and white sandy beaches. Phuket's allure is obvious, as millions of foreign tourists have discovered. But today, the future of this Thai island in the Andaman Sea and the lives of its people are being shaped by the unseen but deadly coronavirus.

Saranya Injan manages Chean Vanich pier located in a small cove on the east coast of Phuket. The tourist boats and ferries that once churned almost ceaselessly through here now lie moored and quietly rocked by the tide.

"Phuket is so desolate right now. It's like a ghost town," said the 51-year-old.

Thailand's best-known resort and others like it across Southeast Asia have been brought to their knees by border control measures to contain the COVID-19 virus, shutting out the foreign tourists who were once the lifeblood of the local economy. Without them, businesses are slowly dying.

But if all goes well, from next month some may again welcome thousands of tourists in unusual -- and, some say, risky -- initiatives that aim to ring-fence island resorts and keep them COVID-free.

From July 1, Thailand is set to conduct a "sandbox experiment," using Phuket as a testing ground to welcome vaccinated foreign visitors with no quarantine period.

Meanwhile, the equally tourist-dependent Indonesian island of Bali -- where visitor numbers have also been decimated by border closures -- plans to designate three popular tourist areas as COVID-19 "green zones," which are able to reopen with strict hygiene protocols.

Coming at a time when the pandemic shows little sign of loosening its grip on the region -- indeed, cases are rising in many areas due to new flare-ups and variants -- some think the initiatives are a step too far. But the chance of making money again is strong.

"Some people are afraid of starving more than contracting the disease," said another Phuket pier operator.

On the face of it, Thailand's requirements to enter the "sandbox" are strict. Tourists must arrive on a direct flight from countries with low to medium infection risks. They must be fully vaccinated for at least 14 days before departure and show a negative test result within 72 hours of boarding their flights. 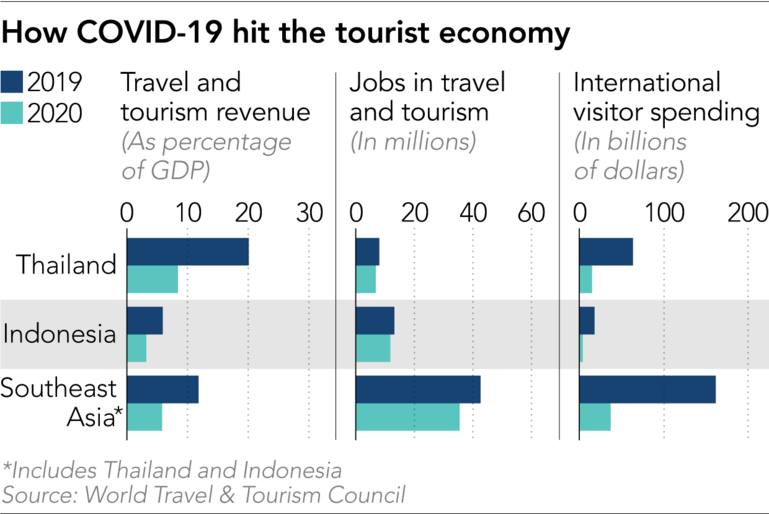 The Tourism Authority of Thailand expects 129,000 foreign visitors in the first three months of the sandbox experiment, with long-haul markets the main target. If the experiment succeeds, vaccinated tourists in Phuket will be allowed to travel to places like Bangkok, Chiang Mai, Pattaya and Krabi from October and travel freely around Thailand from 2022.

Most businesses are supportive and are getting ready. "We have prepared ourselves since the early stage of the COVID-19 pandemic," said Suphajee Suthumpun, CEO of Dusit Thani Group. "Most Dusit Thani Laguna Phuket hotel staff have been vaccinated ... furthermore, we have also asked all of our employees and their families to register for vaccination, to build confidence among customers and staff." Delivery of COVID-19 vaccines in Phuket: Thailand wants to vaccinate 70% of Phuket residents before July.

Tourism and related businesses used to account for 20% of the Thai economy in pre-COVID times. But for Phuket, the proportion was almost 50%. Tourism will play a key role in reviving Southeast Asia's second-largest economy, which shrank 6.1% in 2020.

The Thai tourism industry has high hopes for the experiment. "The Phuket Tourism Sandbox has received a lot of interest from our international tourism alliances, who are looking forward to their vacations in Thailand again," hospitality operator Minor International told Nikkei.

But in contrast to excitement within the government and tourism industry, locals are voicing concerns.

"Many residents in Phuket not involved in the tourism industry are worried about contracting the virus from foreign visitors," said a 60-year-old working in education. "All who benefit from the reopening say Phuket is ready. I am not confident that Phuket is ready to open to foreigners." 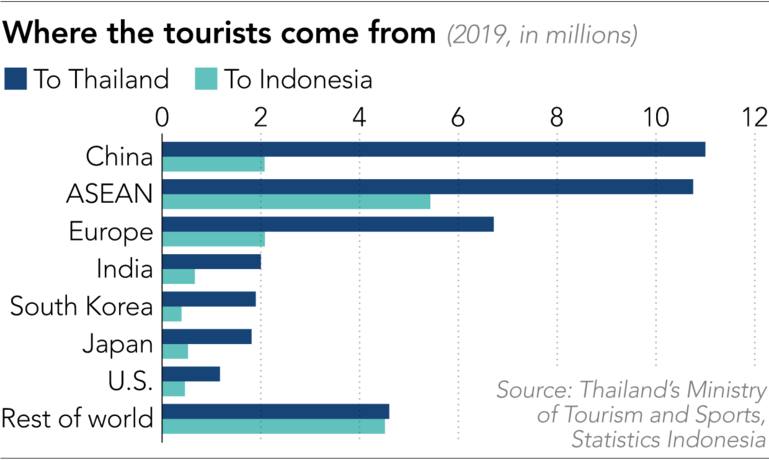 The government aims to inoculate 70% of Phuket residents before July. Deputy Gov. Pichet Panapong asked city chiefs and village heads to make door-to-door visits to encourage people to get shots. But with several clusters emerging nationwide, a third coronavirus wave may make it difficult and contentious for authorities to allocate enough vaccines to the island.

Some businesses on the island survived by serving domestic visitors while foreign tourists were away. They are still skeptical about whether they can rely on the return of foreign tourists.

"Infections may deter domestic visitors from coming to the island," said a local Thai restaurant owner.

But Minor International says: "The revenue derived from Thai tourists alone is not enough for the industry to survive. This is why it is vital that the country reopens to international tourists as soon as possible." The Thai tourism industry has high hopes that the Phuket "sandbox" experiment will revive the visitor economy.   © Reuters

In Bali -- 10 times bigger and more populous than Phuket -- many locals are also desperate for tourists to return.

A 90-minute drive from the island's Ngurah Rai International Airport lies Ubud, an area of deep forests and lush rice terraces that offers tourists a diversion from Bali's nightclubs. But visitors nowadays are few because of the countrywide ban on foreign tourists.

Indonesia is less dependent than Thailand on tourism, which contributed 5.7% to gross domestic product in 2019. But Bali is much more reliant on visitors and its economy has been decimated by the pandemic. Its GDP contraction of 9.3% in 2020 was the deepest among Indonesia's 34 provinces. Hotel occupancy rates have hovered around 10%.

Figures from February showed 657,000 workers, or 19% of the island's working-age population affected by the pandemic in some way, including being laid off. Officials have said that at the height of the pandemic, the province was losing 9.7 trillion rupiah ($680 million) each month.

But light may soon be at the end of the tunnel with two big drives to bring people to Bali.

The first is the "Work from Bali" program to send up to 8,000 Jakarta-based civil servants to the island. "This is part of the government's efforts to create demand so that hotels and restaurants in Bali can survive," Odo Manuhutu, deputy for tourism and creative economy at the minister's office, told reporters in late May.

Some workers at the Ministry of Tourism and Creative Economy have already begun working from Bali, said its minister Sandiaga Uno in early June. "But this is only a trigger and we hope other institutions including the private sector and education can participate so that the hotel occupancy rate can reach 30%." Then comes foreign tourism. The intent is to designate Ubud and two other popular tourist areas -- Sanur and part of Badung, in the island's south -- as COVID-19 "green zones" able to reopen with stricter hygiene protocols. As part of the plans, the government aims to inoculate 2.8 million Bali residents aged 18 or older -- or over 60% of the island's population -- by the end of June.

As in Thailand, tourists will also likely face strict health requirements, including full vaccination before arrival and five-day self-quarantine at designated hotels, while an app to track each visitor is rumored close to being launched.

Government officials have stressed that any reopening is contingent upon coronavirus cases being suppressed -- something Bali seems close to achieving, with daily new cases on a downward trend after peaking in late January.

The province accounts for around 2.6% of cumulative confirmed cases, but now only accounts for 0.7% of active cases. Bali is also the most vaccinated province in Indonesia: 31% of the population has had at least one dose and almost 15% has had two doses.

Many residents and business owners support the green zone plans. "It makes sense to trial the green zones in Bali," said Christia Permata Dharmawan, director at Kebon Vintage Cars, a museum and entertainment venue in East Denpasar, "so that tourists are not afraid to come here, and that they feel we welcome them with open arms. It's important they can trust Bali."

But some experts remain skeptical. "There can be no such thing as a 'green zone' in the way it's being touted in Bali," said Dicky Budiman, global health security researcher at Griffith University in Australia. "The moment you open the door to a newcomer, the community is no longer safe because you will introduce a new variant. Bali's green zones are simply not feasible."

Gusti Ngurah Mahardika, a virus expert at Udayana University in Bali, said: "I think it's almost impossible to open only three areas to tourists as a green zone, as populations in these areas are dynamic. People are coming in and out all of the time." What the government should be considering, said Mahardika, "is making all of Bali a green zone ... so we can really open our borders safely. Bali is a small island, why can't they manage it?"

In both Bali and Phuket, businesses that have overcome previous crises -- such as the 2004 Sumatra-Andaman earthquake and subsequent tsunami, or the 2002 Bali bombing -- hope next month can mark the start of their latest revival.

"We can make a comeback. Our past experiences showed us," said Saranya of Chean Vanich.

Boongyong Nuananong, a 57-year-old who runs a seafood restaurant at Rawai beach at the southern tip of Phuket, said the time was right for the island to move on.

"Even if infections persist, we have to adapt to live with it," he said. "If we are too afraid, we cannot make a living."