Companies such as Reliance, Udaan and Amazon are racing to bring millions of India's mom-and-pop stores, known as kiranas, into their supply chains.   © Nikkei illustration
Business Spotlight

Reliance, Amazon and others race to attract kiranas to expand supply chains

NEW DELHI -- Anil Kumar Bhadra, who has a tiny retail business in a nondescript Indian neighborhood, is a wanted man. Amazon.com, Reliance Retail and other leading companies are all after Bhadra and what he represents.

Flanked by large modern supermarkets on a busy street in the Airoli district of Navi Mumbai -- a planned city next to the commercial capital of India -- Bhadra sells a modest $300 a day worth of goods at his 23-sq.-meter shop. But the companies send salespersons regularly to him with deals on rice, lentils, soap and shampoos, aiming to replace the wholesalers that small retailers like Bhadra depend upon.

The efforts to court him are part of a race among large Indian retailers to bring tens of millions of small mom-and-pop stores, known as kiranas, into their supply chains.

India's retail market was pegged at $793 billion in sales in the fiscal year ended March 2020 and is expected to grow to nearly $1.5 trillion by 2030, according to the latest report by retail consultancy Technopak Advisors and the National Association of Software and Services Companies.

The country is home to about 20 million kiranas, which account for 88% of the brick-and-mortar market. The potential is massive for any company that can consolidate the supply chain and become a "super distributor", replacing thousands of small, independent operators. It would be akin to what Amazon has done to retail in the West. 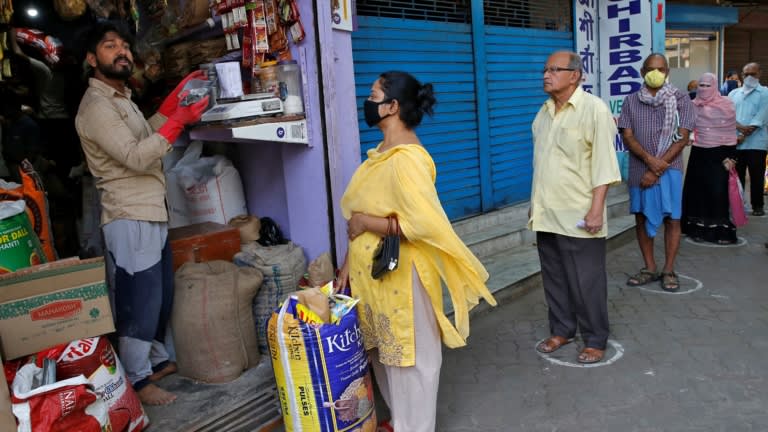 Shoppers maintain a safe distance as they wait to buy groceries at a kirana in Kolkata, India. The small stores account for 88% of the country's brick-and-mortar retail market.   © Reuters

Selling through kiranas helps big retailers access a wider audience and "potentially creates a new customer base, or at least prevents losing out on their existing base," says Kinjal Shah, vice president at ICRA Ratings.

"The only way they can reach that many customers otherwise is by setting up their own physical stores." For kiranas, the upside is the discounts the giants offer so they do not end up losing customers, who would get the same products cheaper online.

In the organized retail space, the battle for leadership has turned into a legal battle. Reliance Group, led by India's richest business tycoon Mukesh Ambani, announced in August its intent to buy the core businesses of Future Group, a pioneer in India's modern retail, for 247.13 billion rupees ($3.4 billion).

Amazon, which had a stake in a Future unit, has challenged the deal and the dispute is currently being fought in an Indian court. However, this media-busting battle between major companies is only a small part of India's huge retail market. At the same time, the race to win over as many kiranas as possible has heated up.

The gadget, the size of a large smartphone, also helps store owners manage billing and inventory as well as discounted items. The company has so far distributed 100,000 devices. There is a refundable deposit but no rental fees for the device. Ultimately, the conglomerate wants consumers to order groceries via JioMart, where they can choose which kirana to deliver their purchases. At the back end, Reliance will fulfill orders for shops from its own warehouses.

By bringing in both sellers and customers to the platform, the company eventually wants to own the entire value chain -- including transaction processing via JioMoney, its digital wallet.

Ambani said as much in a 2018 speech at the company's general meeting. He wants Reliance to transition into a technology platform that will oversee a convergence of retail stores with Jio customers and the small shopkeepers who are a "critical fulfillment point," integrating the physical and digital marketplaces. Customers would also access the internet via Jio's broadband network.

Similarly, Udaan, a wholesale e-commerce platform, has tied up with manufacturers and brands to sell products to kiranas. Udaan has separate units that offer kirana owners credit -- a function traditionally filled by wholesalers or distributors and an important draw for retailers in this low-margin business.

The startup, which launched in 2016, has raised $1.15 billion to date. Investors include GGV Capital, Tencent Holdings and Lightspeed Venture Partners. Udaan embraces everything from clothes, shoes and electronics to groceries and staples, and has about 30,000 sellers across 900 cities on its platform.

Unlike Udaan, Bangalore-based Jumbotail, which started in 2015, deals with only grocery and food items. It has raised $53 million and built its business in Bangalore. Now that it has become profitable, the startup is ramping up operations in other parts of the country.

Amazon, meanwhile, has a range of initiatives to integrate e-commerce operations in the vast network of kiranas, including bringing them online during the pandemic to sell products ranging from fresh flowers to electronics and using them as agents for last-mile delivery.

In April the company announced that by 2025 it plans to bring a million local kirana stores onto its website, up from about 50,000 now. 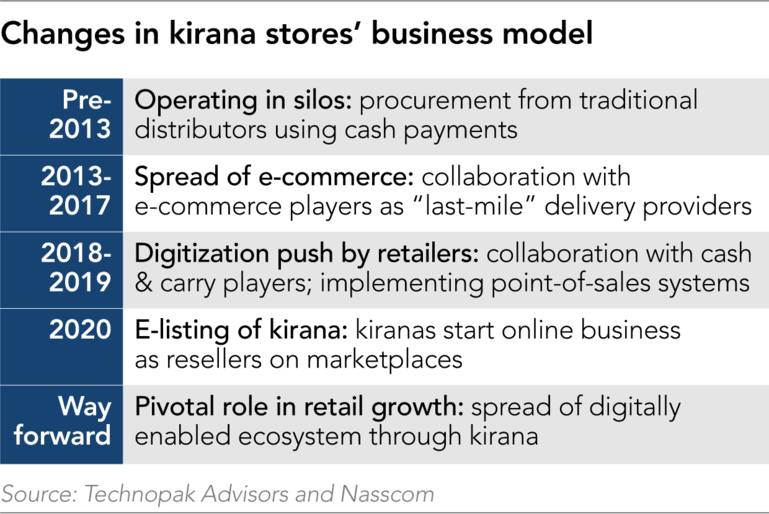 While it is still early to tell if any of these strategies will work, they have gotten a push from recent events, including demonetization in which the government wiped out 86% of the currency overnight and a new national goods and services tax. These, as well as the COVID-19 pandemic, have forced small retailers to go digital.

For now, kiranas have multiple choices, with some owners having figured out who they do not want to work with while testing others.

Mahendra Prajapati, a kirana owner in Mumbai, says he will use JioMart for the discount coupons on expensive items like cooking oil and the promise of next-day delivery. These incentives help him overlook the fact that the company has very limited inventory and that many products are priced higher than what he can charge customers.

Discounts apart, another incentive is that some of the platforms offer credit lines -- a key part of this cash-heavy sector.

In Bangalore, Suresh Lakshman Amin sells food and grocery items to other retailers and individual customers. He is grateful for the credit line Jumbotail extended when he was starting out over three years ago. He orders many food staples from Jumbotail, but also shops around Amazon and Udaan for other items, which he says are cheaper.

"Kiranas can see value if someone can help bring more sales," said a Mumbai-based analyst at a foreign company.

Ashok Kumar, who started his shop in Mysore six months ago, embodies this outlook. After evaluating suppliers and wholesalers, he has narrowed his supply chain to the traditional providers as well as Jumbotail, where he gets many of his staples, and Amazon, which he finds cheaper for things like cleaning supplies and cosmetics.

"I switch between the two," he said. "When I get time during the day, I keep checking their apps. Where I get a better offer, that's where I book it." 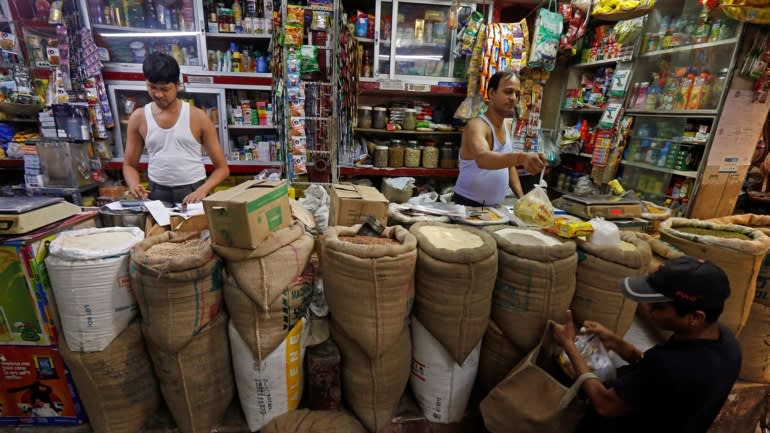 Nobody knows who will be the winner in the race to bring kiranas into the supply chain. Many store owners are using different platforms in search of the best deal.   © Reuters

There is, however, still some skepticism about the business model of major platforms incorporating kiranas into their supply chains.

"There's a mythical belief that if somehow deliveries can be done through kiranas, the cost of delivery will be much lower," says Technopak chairman Arvind Singhal. "The point being missed is that a kirana is a [19 to 37-sq. meter] space and the reason someone is buying online is for variety."

A kirana owner confided to Nikkei Asia that he was fed up with platform representatives frequently asking him what was selling in his store. He pointed out that if they claim to be for the good of kiranas, then it is their job to tell the stores what is selling, not vice versa.

Bhadra in Navi Mumbai is still unable to decide who to do business with, as he is not impressed by most of the platforms and has declared at least one a fraud and a few others a waste of time, as they had limited stock. "Why should I give them my [sales] data?" he said, especially when his existing suppliers have him covered with a wide variety of well-priced products and doorstep delivery, even when the country went into lockdown.

The only one he has made an exception for so far is Reliance's JioMart. He initially took the company's point of sale machine because it waives all merchant fees, he said. He now orders some of his supplies through the app, but only about 20% of the total.

The digital platforms in India still have quite a way to go until kirana owners like Bhadra fully climb aboard.