Nomura's problems in the U.S. have been a blow for Kentaro Okuda at the end of his first year as chief executive. (Source photos by Tetsuya Kitayama and Reuters)
Business Spotlight

TOKYO -- For Nomura, disaster struck with the financial year's finish line in sight.

Japan's biggest brokerage house was just two days from closing its most successful fiscal year when, on March 29, it warned of a possible $2 billion loss in the U.S.

Until then, the company had enjoyed record or near-record profits for three straight quarters despite the coronavirus pandemic -- to the delight of Kentaro Okuda, who was approaching the end of his first year as chief executive.

Skeptics had been forced to rethink their view that Nomura's earnings were always likely to be highly volatile -- sometimes very good, at other times loss-making -- due to its large trading operations in the U.S. The rethink was also reinforced by the decision by the company to trim back its focus to niche areas overseas -- such as equity derivatives and mortgage-backed securities in the U.S. -- following a period of sharp expansion after Nomura took over some of Lehman Brothers' operations after its collapse in 2008.

Okuda, who headed Nomura's U.S. operations in 2017 and 2018, was confident that one of the most global names in Japanese finance had changed.

"Nomura's overseas business has become able to generate steady earnings, even during market volatility, owing to its persistent efforts in the last few years," he declared as recently as December. But Nomura's New York office had allowed the company to have huge exposure to one client -- Bill Hwang's Archegos Capital Management, a loosely regulated investment company or 'family office', which had built up huge positions in a few heavily shorted stocks with the help of Nomura and other major investment banks in Japan and Europe.

Archegos's bet fell apart last month when the prices of shares it held started to drop, leaving it having to liquidate other positions to meet margin calls by counterparties.

Nomura shares, which were up 32% in the year to date, tumbled 19% by April 7 following its profit warning. Mitsubishi UFJ Morgan Stanley Securities cut its annual earnings estimate for Nomura almost by half and slashed its rating on the stock to neutral from overweight.

The loss not only marred Okuda's first anniversary as CEO on April 1, but also "has presented him with a new task of beefing up the company's risk management," said Natsumu Tsujino, senior analyst at Mitsubishi UFJ Morgan Stanley. Okuda now needs to win back investor trust.

The questions in the minds of investors are why Nomura could not take mitigating measures much earlier, have an accurate assessment of its exposure to the client, estimate a potential hit from share price falls and review its transactions, Tsujino argues. 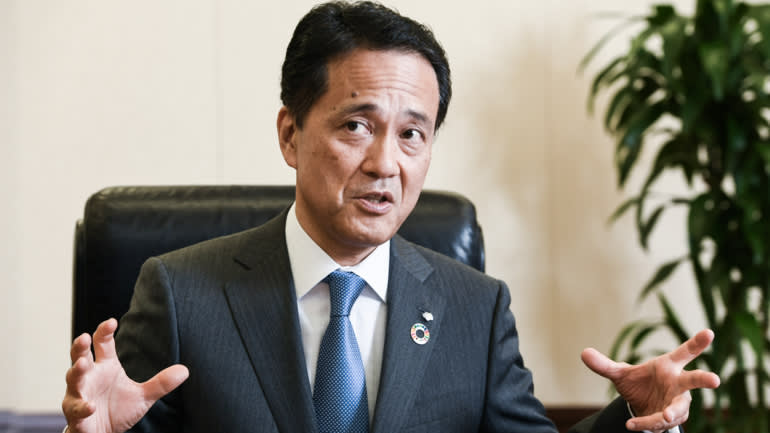 There are other questions for Nomura to answer for its shareholders, she adds. If the level of oversight had been inadequate, would it be due to Archegos being a family office? Is more rigorous oversight in place for other investors such as hedge funds? Does Nomura have a full grasp of the risks taken by such clients, including their transactions with other banks? Has there been excessive risk-taking by clients in general due to unprecedented monetary policy easing worldwide?

So far, Japanese regulators have responded calmly. Finance Minister Taro Aso said that he did not expect the loss to become a major issue that could severely hurt the financial health of individual banks. Other than Nomura, Mizuho Financial Group and Mitsubishi UFJ Morgan Stanley have also warned of possible losses related to Archegos.

Aso said that Japan's Financial Services Agency was looking into what has happened and exchanging information with foreign regulators and central bank the Bank of Japan. But Nikkei has learned that the FSA and the BOJ have launched a broader investigation into the financial industry to examine the scale of the problem and find out if other banks are involved in similar trades. They now believe that Nomura's loss is a serious issue.

Investors count on Okuda, the CEO, to identify underlying problems and make necessary changes in course. "If they want to restructure, he would be in a better position because he knows," said Michael Makdad, analyst at Morningstar, referring to Okuda's familiarity with Nomura's U.S. business. "They cannot lie to him."

So far Nomura has said little beyond a statement that it "will continue to take the appropriate steps to address this issue and make a further disclosure once the impact of the potential loss has been determined."

Credit Suisse, which has warned of a loss of $4.7 billion from the Archegos meltdown, said Tuesday it would replace its investment banking head and chief risk officer.

For many financial firms, risk-taking has been on the rise as ultra-low interest rates have made it difficult to find good investments. "Low interest rates are driving investors and investment banks into equity investment," said Haruyoshi Mabuchi, an independent investment analyst. Japanese banks tend to focus on the U.S. because it is the biggest capital market and offers the most investment opportunities. The markets in Asia were still underdeveloped, Mabuchi said.

"It is a difficult balancing act," Mabuchi said. "You cannot make money unless you take risks. But if you do, there is a risk of getting hit by market swings."

Some analysts underline the need for a more geographically diversified business portfolio. "In the U.S., if they have areas where they have a competitive advantage and strength, by all means do that," said Makdad. "But the hope that overseas is going to provide growth because Japan is not having growth" was misplaced, he added. "Japan must be your source of strength."

"How can Nomura go against Goldman Sachs and Morgan Stanley if even European investment banks have not been successful in doing that?" Makdad said. For instance, Germany's Deutsche Bank struggled to penetrate the U.S. despite its acquisition of Bankers Trust. Credit Suisse bought First Boston, but could not gain much presence either.

Nomura has built some lucrative niches in the U.S. Last year, it ranked No. 2 in issuance volumes for residential mortgage-backed securities, relatively safe investments that are popular with Japanese institutional investors such as pension funds and life insurers.

Nomura has also been successful as a 'disrupter' in the low-cost stock trading service through the U.S.-based Instinet electronic trading unit it acquired in 2007. Nomura was No. 1 in terms of revenue for U.S.-listed equity options trading in the first half of 2020, according to the company.

Instinet's strong presence has allowed Nomura to execute orders without making them visible to other investors -- a feature that has apparently helped the Japanese bank build business with hedge funds and family offices.

The danger, according to Makdad, lies in Nomura's attempt to do more in the U.S., such as expanding into prime brokerage -- referring to the business of dealing with hedge funds, including lending stocks for short positions.

Nomura's U.S. drive is in part a reflection of the perceived lack of growth in Japan.

According to the Bank of Japan, Japanese households invest only 16% of their personal liquid assets, about half the level in the U.S., while about half is kept in cash and bank deposit accounts.

"Business with Japanese retail investors is unlikely to grow rapidly. Clients of face-to-face brokerage services tend to be cautious," said analyst Tsujino. "Nomura can earn higher returns on equity (through markets activity) than by doing retail brokerage only" -- as long as the costs of traders were properly kept under control, she said.

Nomura, other brokerages and the Financial Services Agency have been taking steps to rejuvenate the retail brokerage market in Japan, by making it more investor-friendly.

For a long time, brokers in Japan tended to pursue short-term profits by selling new products to earn "load" fees, rather than growing the customer's assets. But in October Daiwa Securities, the No. 2 broker, launched a "no-load" investment trust service, in which fees are charged based on the balance of invested money. Nomura is now shifting toward a similar system. Nomura is also opening up services to retail investors that have traditionally been kept for institutions. From the start of this fiscal year on April 1, the company has combined its merchant banking unit with that of asset management. The idea is to give retail investors opportunities to invest in private companies and earn returns by taking them public.

The initiative echoes the merchant banking business Nomura undertook with British financier Guy Hands during the 1990s in the U.K., a business model that was subsequently introduced in Japan for investments in companies like Seibu Department Store and Ashikaga Bank.

Since 2019, Nomura has also had partnerships with two regional lenders -- Awa Bank and San-in Godo Bank -- in an attempt to expand its customer base beyond the nation's most wealthy, a group on which Nomura has had a firm grip.

In China, which Nomura hopes will become much more important to its growth, it launched a wealth management service through its majority-owned joint venture, Nomura Orient International Securities, in late 2019. The company aims to build a branch network in China to cater to wealthy individuals. Wealth management services have also been expanded in the rest of Asia since last year.

The initiatives come as Nomura tries to modernize its management, which has traditionally been filled by those with experience only within Nomura.

This month, Nomura said half of the 12 new executives in Nomura Holdings, which includes Nomura Securities and Nomura Asset Management, joined the group midcareer. The company does not disclose the share of such people in the entire management team.

Bringing in people with different points of view is expected to help strengthen Nomura's Japanese operations. Domestic initiatives, as well as risk management, could be key if Nomura is to avoid another blow-up or if it is to grow its domestic business.

Over the past decade Nomura has already restructured overseas operations, such as its European equity business, to focus on its strengths, with the overseas payroll down 14% between 2015-2020 to just under 11,000. The Archegos loss raises questions as to whether the company still has further to go.

Meanwhile few expect the trading conditions in the U.S -- which did so much to help the profits of Nomura's business there for most of the past fiscal year -- to remain as helpful. It was a Goldilocks environment for many brokers, whose business prosper in a reasonably volatile market, but not too hot or cold.