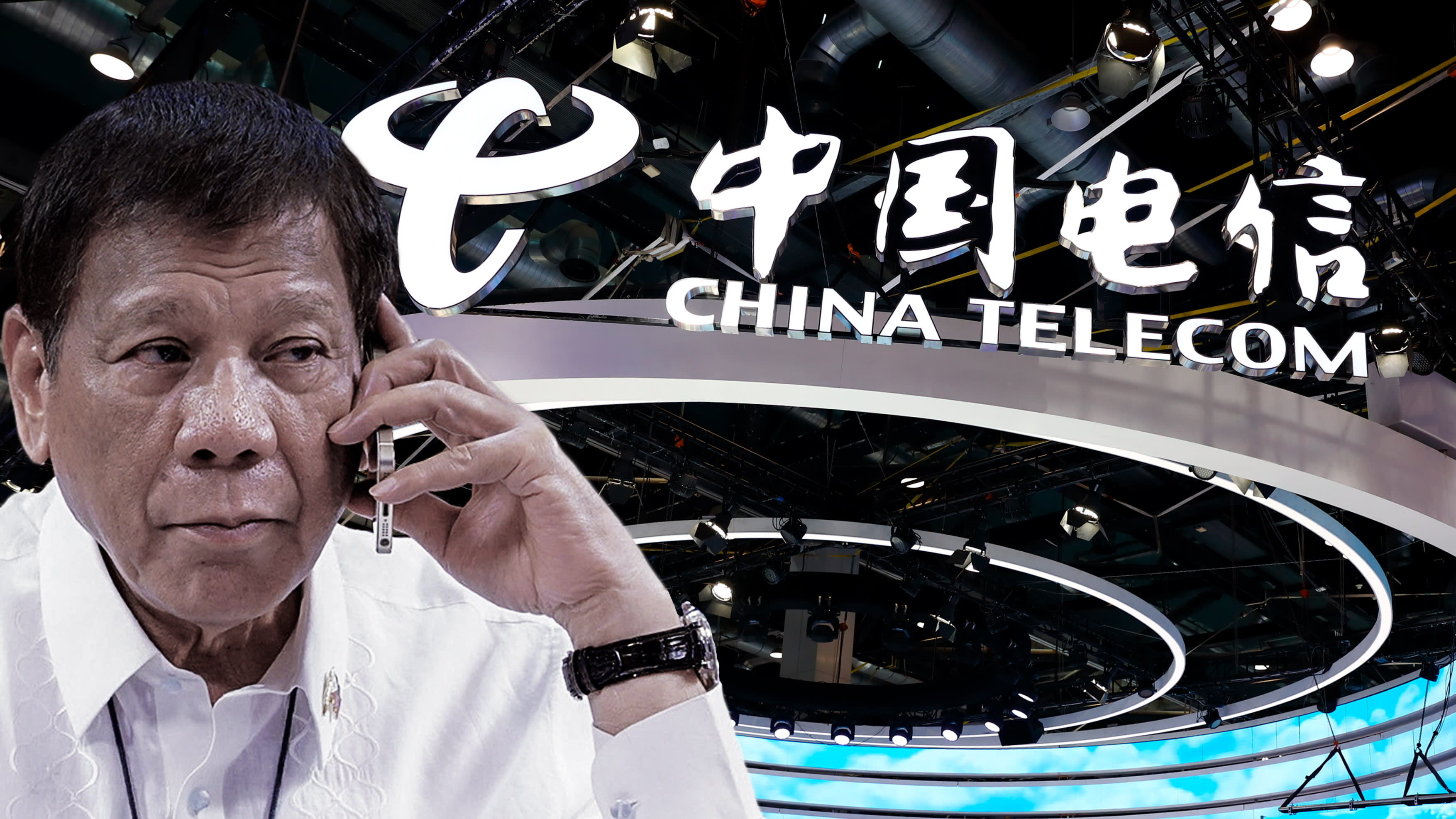 MANILA -- When the Philippines' telecom challenger Dito Telecommunity picked March 28 to showcase its brand-new network, the date was carefully chosen to honor the man who made it all possible -- Rodrigo Duterte.

Timing it with the Philippine president's birthday would show the close ties between the leader and China Telecom-backed Dito, the company Duterte is hoping will break up the country's long-standing telecom duopoly.

But what the company had hoped would be a splash became instead a low-key "internal" event after most of the country was put on lockdown to fight the spread of the coronavirus.

Nor is it the only milestone the company has struggled to hit. A "technical audit" scheduled for July 8 to confirm Dito's physical network was in place and ready to operate has been pushed back to January 2021, as only a quarter of its planned towers have been built.

Now the company is hoping to be ready by Duterte's next birthday, as it races against time to fulfill its promise of a "world-class" telecoms service.

Failure to meet its targets could cost the company, which has billions riding on the venture, a hefty price -- and dent Duterte's legacy as a president who shook up entrenched business interests for the benefit of consumers.

"We are on track for our commercial launch this March 2021, and we are moving heaven and earth to make that happen and have a successful launch," Dito Chief Administrative Officer Adel Tamano insisted during an online briefing last month.

An analyst, however, said hitting that target is an "uphill task" as surging coronavirus cases forced Metro Manila and nearby provinces to return to stricter lockdowns on Aug. 4. Since the partial reopening of the economy on June 1, the number of infections has ballooned from 18,000 to over 119,000 on Thursday, the highest in Southeast Asia. 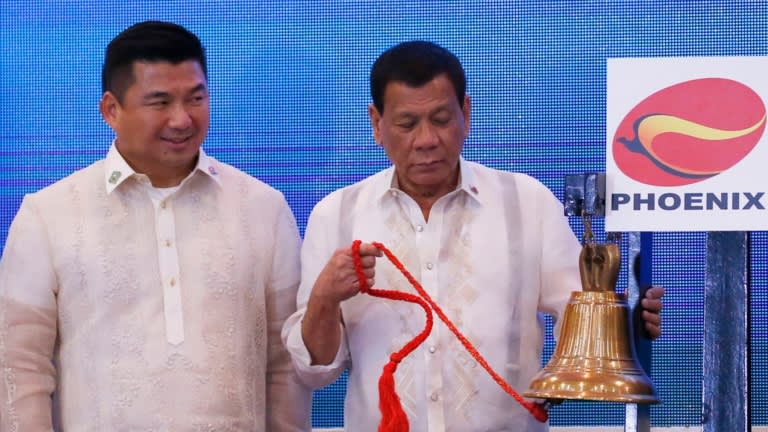 "March 2021 is a tough deadline to achieve, but I think it really depends on how fast restrictions are lifted," Janice Chong, telecom analyst at Fitch Ratings, told the Nikkei Asian Review. "But looking at current circumstances just makes it more difficult."

Dito is the product of Duterte's pivot to China, which the president has courted for investment despite the two countries' rivalry in the South China Sea. Though espionage and security concerns initially dogged China Telecom, the company has successfully shrugged those off. Other Chinese companies, meanwhile, have secured contacts for railway and dam projects.

Early in his term in 2016, amid widespread complaints of slow and expensive internet service, Duterte threatened to break the telecom duopoly with a competitor from China. He stepped up his attack during his annual congressional address last week, warning PLDT, backed by Japan's NTT Group, and Globe Telecom, a unit of Singapore Telecommunications -- to improve services by December or face closure.

The president burnished his pro-consumer credentials further last year when he took aim at Manila's two water concessionaires, which belong to the groups that control PLDT and Globe. Duterte ordered a review of their contracts, saying the companies were "ripping off" consumers.

Dito, formerly known as Mislatel Consortium, was awarded a telecom license in July last year, after emerging as the lone qualified bidder during a 2018 auction. Under a 257 billion peso ($5 billion) investment plan, the company has committed to providing telecom services covering 37% of the population with an internet speed of 27 megabits per second in its first year of operation -- well above what the government requirement on both counts -- and said it will increase those numbers to 80% and 55 Mbps, respectively, in the fifth year.

Dito is 60% owned by companies controlled by Dennis Uy, a tycoon based in the southern city of Davao. State-owned China Telecom owns the remaining 40%, the limit allowed by law for foreign investments in public utilities. 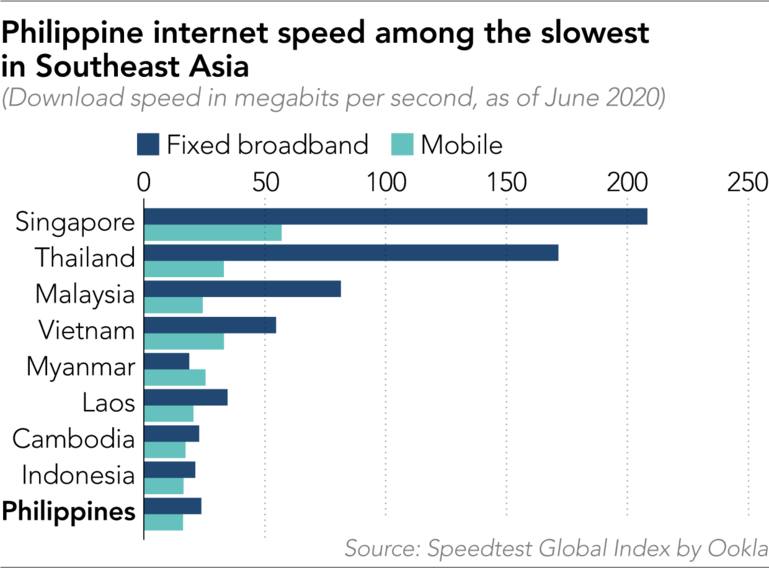 Uy is one of the businessmen who financed Duterte's presidential campaign in 2016 and has since become one of the most active dealmakers in the country. He has secured loans from Bank of China and has purchased assets ranging from shippers to bakeshops and forayed into new businesses such as resorts and casinos.

But even though Dito's backers enjoy close ties with Duterte, the company was still plagued by red tape, the same issue that hampered PLDT and Globe's network build-up.

Under lockdown measures imposed in March, vital services such as telcos were allowed to keep running, but this still paralyzed 80% of Dito's network build-up, said Chief Technology Officer Rodolfo Santiago, a retired military general. "We are at the mercy of the local government units," he told reporters last month.

As of early July, Dito had built 300 out of the 1,300 towers needed to cover 37% of the population. This means the company must complete at least five towers a day until the audit on Jan. 7.

"The incumbents themselves are finding it a challenge to [build] cell sites, hampered by the limited mobility due to the lockdown, as well as labor and supply chain issues," Chong said. "For a new player to sort of build network from scratch, it will be very difficult."

Santiago said cellular tower locations have been secured and an additional 500 towers were already in the works. "Every day, we start construction in several sites," Santiago said.

Dito has enlisted China's Huawei Technologies, ZTE and Huaxin to supply its network equipment, as the Duterte administration rejected pressure from the U.S. to exclude Huawei from its 5G network.

Dito said it will also tap common tower providers to speed up its network build-up. The tower-sharing and the policy allowing mobile users to switch service providers without changing numbers were introduced by the Duterte administration partly to support the new player.

The January audit, which will be conducted by independent evaluators, must show that Dito's network has met its first-year commitments. The company will have two chances to fix any deficiencies during its first five years. If it fails to do so, Dito will forfeit its 25.7 billion peso performance bond, said Edgardo Cabarios, deputy commissioner at the National Telecommunications Commission. 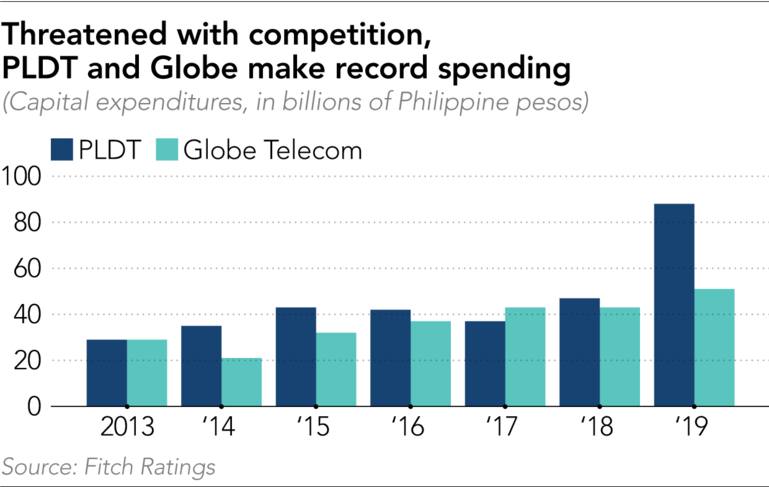 Cabarios expects Dito to begin operations with a robust network early next year, saying it is not in the best interest of the company to delay it further. The company initially eyed a 2020 commercial launch.

"A new player would want to generate cash as early as possible. Because right now it's all expenses. Otherwise how can you face the competition?" Cabarios told Nikkei.

Dito aims to capture a 30% market share in a few years, a goal that rival Globe's CEO Ernest Cu called "impossible" during an interview with Nikkei in January.

Dito's Santiago said the pandemic -- which has forced the widescale adoption of work-from-home arrangements -- has improved the outlook on the sector. But Dito is missing the windfall enjoyed by other telecom-related stocks amid delays its network rollout. DITO CME Holdings, which is set to indirectly own a stake in Dito, is down 20% this year. Meanwhile, PLDT's stocks have surged 39% while those of Globe are up 5%, even as Manila's benchmark index has plunged 25% to date.

As Dito struggled to build its network, PLDT and Globe deployed a record combined capital expenditure of 133 billion pesos last year. That was a 33% increase from 2017, according to Fitch, even as revenue only grew 7% during the period. To shore up their finances, PLDT and Globe have recently raised $600 million each from overseas bond sales.

The duopoly is not the only ones flexing their muscles. Local fixed-line broadband service provider Converge ICT Solutions, which is backed by U.S. fund Warburg Pincus, filed for a $725 million IPO in June to help bankroll its expansion.

But Converge will likely be a partner rather than a competitor for Dito, said former Department of Information and Communications Technology acting secretary Eliseo Rio, who oversaw the search for a new telecom player.

Rio said the new player will likely focus on fixed-line broadband internet service for a few years and may rent Converge's extensive fiber optic cable network on Luzon island, the economic heart of the Philippines and home to over half of its 105 million inhabitants. 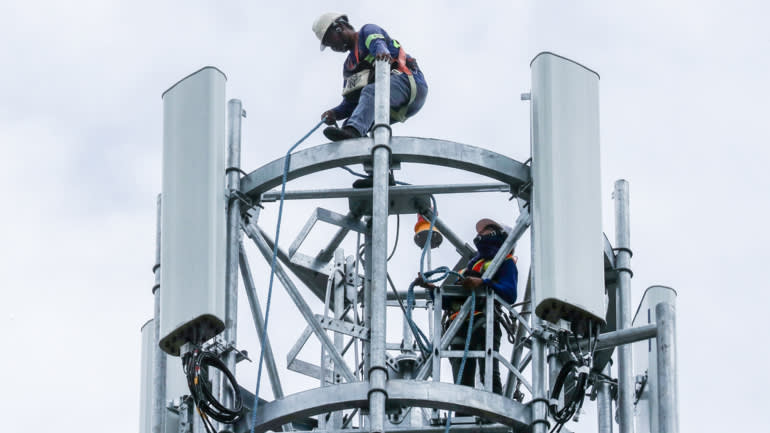 Red tape has hindered the build-out of telecom networks in the Philippines.    © Reuters

"That's where they can compete. If they focus on mobile -- where Globe and PLDT are strong -- they will not gain a traction," Rio told Nikkei. "They don't have time to rollout the way PLDT and Globe did."

PLDT and Globe have previously acquired smaller rivals to expand their network, moves that pushed the roughly $6.2 billion industry into a virtual duopoly. Weeks before Duterte assumed office, PLDT and Globe jointly took over the telecom assets, including vital radio frequencies, of San Miguel for $1.5 billion.

San Miguel, the beer-to-infrastructure conglomerate, had planned to break the country's telecom duopoly but retreated after partnership talks with Australian telecom Telstra collapsed.

To avoid anti-competitive practices, Cabarios said Dito is barred from making commercial partnership with the duopoly under its license. The company also must surrender its frequencies to the government in the case of a divestment, Rio said.

But while Duterte may have to wait for a little longer to see China Telecom's network up and running, Rio said the president has partly achieved his goal, with internet speeds that have nearly doubled from 2016.

"Had this pandemic happened three years ago, our network would have crashed," Rio said. "But PLDT and Globe were forced to improve their network, so now we are connected." 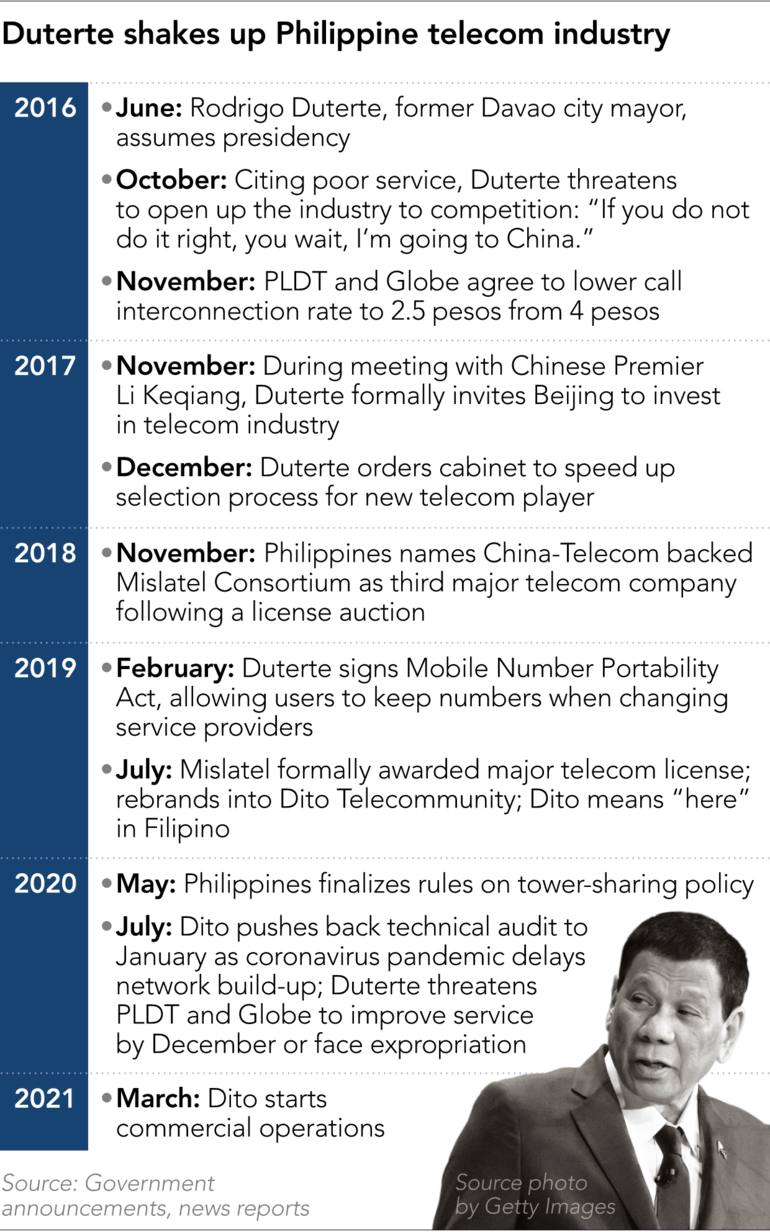