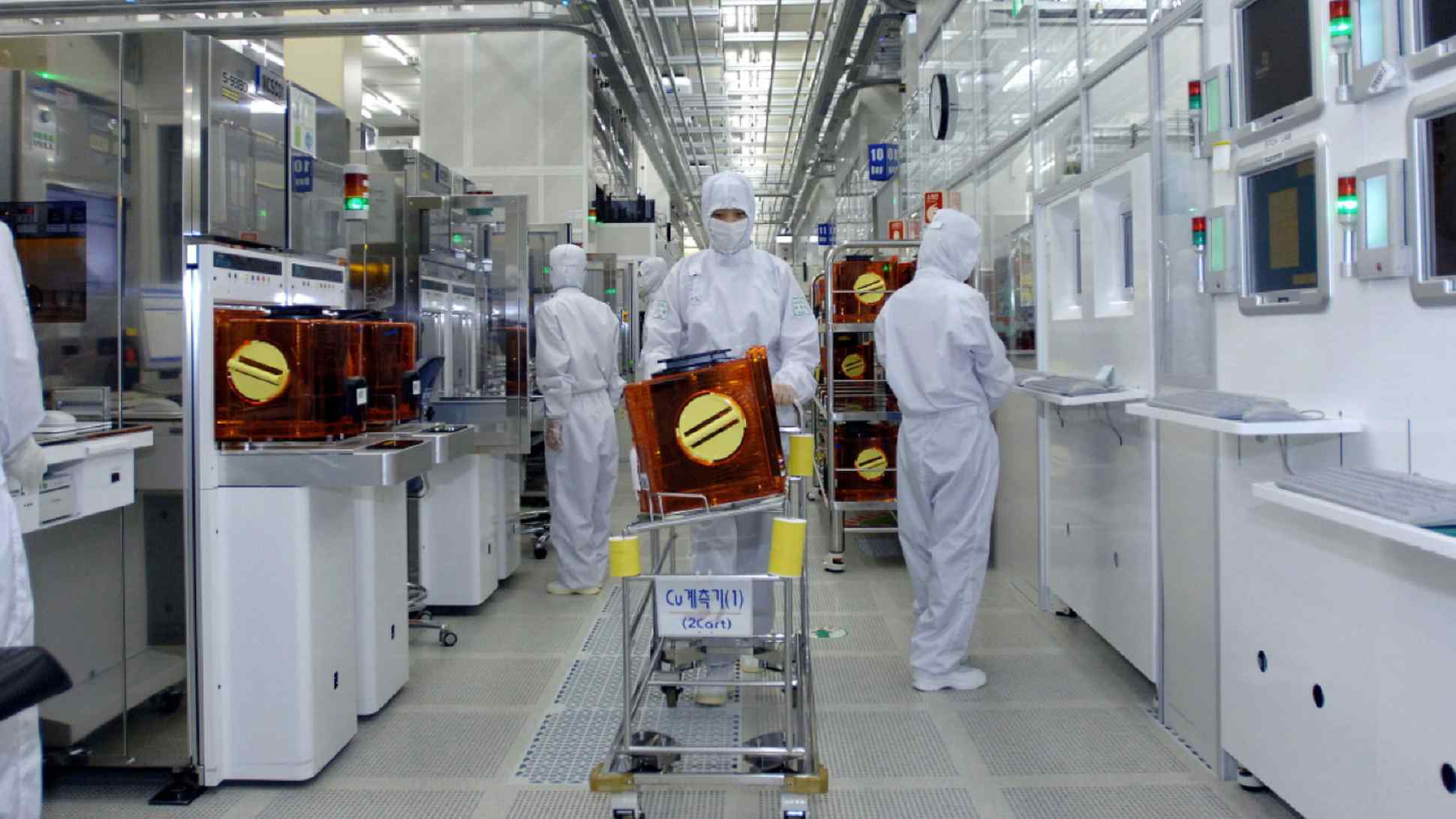 Samsung makes strenuous efforts to prevent leaks of sensitive information, with strict security around many of its laboratories and offices. (File photo)   © AFP/Jiji
Business Spotlight

Samsung races to guard its secrets as China rivals close in

"What would have been the financial damage if this drawing had fallen into China's hands?" she asked icily as she stood before the defendants at the district court in Suwon, the capital of South Korea's Gyeonggi Province, in November 2020.

The men, one a former senior researcher at Samsung Display, were arrested by the Suwon District Prosecutors' Office in August for allegedly trying to leak Samsung's technologies for organic electroluminescent, or OLED, panel production to China -- in violation of the industrial technology protection law. Prosecutors allege they collaborated with a South Korean equipment maker to develop a display production machine based on Samsung technologies in order to sell it to a Chinese company. A third defendant, a manager at the equipment supplier, is also on trial.

The ongoing case is, of course, far from the most well-known legal drama surrounding Samsung. In January, the conglomerate's de facto chief, Samsung Electronics Vice Chairman Lee Jae-yong, was jailed for bribery. Nevertheless, the issues being highlighted in the Suwon courtroom could end up being just as important for the company's future.

Samsung Electronics boasts a market capitalization of 556 trillion won ($486.54 billion) and raked in 236.2 trillion won in sales and 35.9 trillion won in operating profit in its 2020 business year. It has leading global market shares in everything from smartphones and TVs to memory chips. But its success has made it the target of fast-rising Chinese rivals, which are keen to ramp up their ambitions as tech tensions between Beijing and Washington heat up.

Ensuring Samsung's continued success -- and protecting its industrial secrets -- is a matter of national importance for Seoul. Indeed, the investigation that led to the arrest of the Samsung employees stemmed from a secret inspection by the National Intelligence Service, South Korea's chief intelligence agency.

The South Korean government has designated technologies related to OLED panels as "national core technologies," and the NIS has a section dedicated to making sure those stay within the country.

If found guilty, the three defendants face at least three years in prison. Worried members of their families were in court.

But while South Korea has toughened penalties for technology leaks, cases of corporate espionage have not abated.

In the five years to 2019, there were 123 cases of technology leaks from South Korea, according to a report submitted by the NIS to the national assembly. The total included 83 leaks to China, many of which involved technologies in fields where South Korean companies are strong, such as semiconductors, displays and shipbuilding, the report said.

Faced with the threat of leaks, Samsung is not standing idle. Its measures start in the heart of its workplaces and even with the devices it makes.

Samsung disables the camera and audio-recording functions of employees' smartphones at its laboratories and factories. At one laboratory, the printing paper used in copying machines contains metal foil, part of a detection system intended to stop employees from printing out sensitive information and taking it out of the lab without permission. Alarms sound if the paper leaves the building. 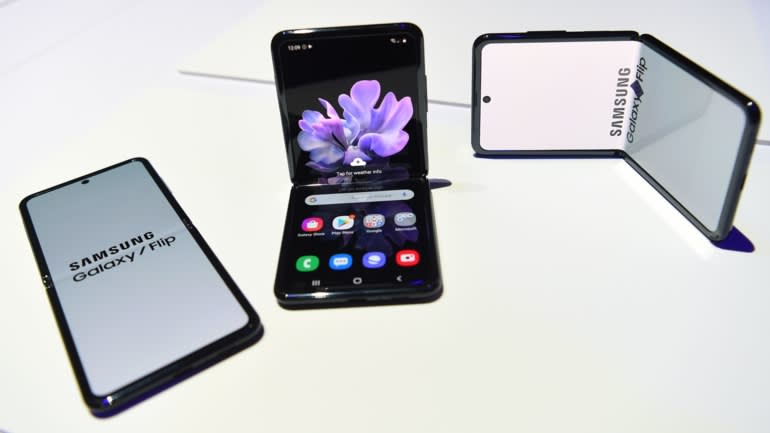 Samsung is a global leader in smartphones but Chinese rivals are looking to close the gap.   © AFP/Jiji

And while South Korea's government called for companies to introduce work-from-home measure amid the coronavirus pandemic, Samsung remained resolute in not allowing employees to take documents with technical information out of the office.

But however thorough Samsung tries to be in such measures, the company has 287,000 workers around the world -- and they are able to switch jobs.

Openings posted on online job-hunting sites in South Korea often include such phrases as "Work location: inland region of China" or "Wanted: workers from display-related companies," alongside the promise of "favorable treatment for workers from companies S and L."

The initials stand for Samsung and its smaller compatriot LG, whose employees are often courted with promises of lucrative salaries and generous raises. For engineers who have fallen behind in the intensely competitive environment of South Korea Inc., switching to a Chinese company can be an attractive option. According to engineers at BOE Technology Group, the biggest Chinese panel maker has around 120 South Koreans working at its plants and laboratories. The number includes more than 50 former Samsung engineers who are leading the development of OLED panels for Apple. Many of them quit the South Korean company when it suffered poor earnings in 2015 and 2016, the BOE engineers said. BOE did not immediately respond to requests for comment.

BOE's plant in Chengdu, in the Chinese province of Sichuan, has production lines set up just like those in Samsung Display's main plant in Asan, South Chungcheong Province, in South Korea. BOE also has many Japanese-made machines it has purchased using subsidies from the Chinese government.

BOE already supplies OLED screens for the iPhone repair market, and the company is looking to become a certified supplier for new iPhones this year. Backed by the Chinese government, BOE's push to become a full-fledged display provider for Apple makes it a serious threat to Samsung's global market share.

No laws prevent talented South Koreans from selling their labor freely in the international jobs market -- but those who do so are keenly aware that their choices may be frowned upon.

South Korean engineers and others who work in China often adopt aliases to avoid being traced by authorities or their former employers in South Korea. When they return home on vacation or other occasions, they often come via Hong Kong or Shanghai, they said. 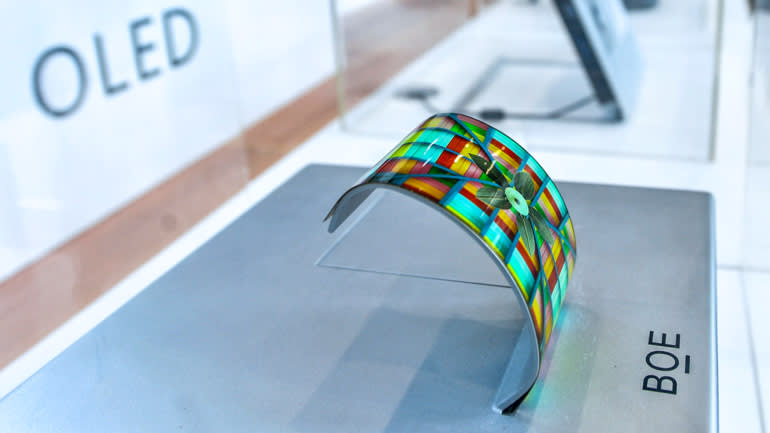 BOE, China's national display champion, is hoping to challenge Samsung in the market for OLED displays like those used in the latest iPhones.    © AP

One BOE engineer said he avoids direct flights for fear of being detained -- on suspicion of leaking core technology -- during re-entry checks at Incheon International Airport near Seoul. Flying over busy air routes, he pretends to be an ordinary businessman.

In 2020, BOE's top executive recruited Chang Won-ki, a South Korean industry veteran who once served as the head of a joint venture for liquid crystal display panel production between Samsung and Sony, for the post of vice chairman at a Chinese maker of display semiconductors.

Chang quit the Chinese company, an affiliate of BOE, soon after his career move was reported in South Korea and sparked concerns about technology leaks.

"I had accepted the job offer on condition there be no competition with Samsung," he told local media, but said he felt pressured because of widespread misunderstanding in South Korea that he was contributing to the outflow of technologies.

The brain drain is also increasing in the field of semiconductors, a focal area of U.S.-China high-tech friction. One of the major Chinese recruiters is Semiconductor Manufacturing International Corp., the leading semiconductor foundry company -- which is a tech champion for Beijing and perhaps as a result is now on a U.S. government blacklist.

Closely analyzing patent application lists released by the U.S. Patent and Trademark Office, Yoo Kyoung-dong, a patent consultant in South Korea, confirmed 62 South Korean names on applications made by SMIC. Based on that number, Yoo says it is likely that "more than 100 South Korean researchers belong to SMIC." SMIC did not respond to requests for comment.

Headhunting companies have stepped up their approaches to engineers at Samsung's research center for computer chip production technology in the city of Hwaseong, near Seoul, since U.S.-China tech tensions began heating up, according to a person familiar with the matter.

The Chinese threat to Samsung was predicted by the company's previous leader, the late Lee Kun-hee, who was not only the architect of the company's global rise but foresaw its next challenges.

"In the next 10 years, most of the businesses and products Samsung is known for will disappear," Lee, who died in October, said in March 2010.

That stark warning to galvanize his workforce may not have played out entirely, as Samsung's continued huge market power and technological might demonstrate. And U.S. sanctions have also slowed China's drive to promote domestic production of semiconductors, giving Samsung more breathing room than it might otherwise have had. But the intensity of China's challenge remains.

For some seven years, the responsibility for fending off that threat has fallen to Lee's son, Lee Jae-yong, who became the de facto chief of the business empire after his father was hospitalized in 2014 following a heart attack. The younger Lee's tenure, however, has been marked by setbacks, including an overheating battery issue that led to mass recalls of Samsung's flagship Galaxy Note 7 smartphones in 2016.

There were also questions over whether Lee possesses the same vision and leadership skills as his father and can lead the company in a new era of global trade tensions. He has not so far developed a significant new business line for Samsung.

But the most obvious problem for Lee's tenure and management is his confinement. After the ruling on Jan. 18, Lee has now returned to prison to complete the remaining year and half of his sentence for bribery, after already serving 12 months in 2017 and 2018.

With a leadership gap at the top, and Chinese competitors closing in on Samsung's core businesses such as smartphones, displays and home appliances, the company's challenge to find new ways to stay innovative and competitive is set to grow -- no matter how strenuous its efforts to stem the flow of technical know-how from within its walls.

Kim Jaewon and Na Ki-young in Seoul and Cheng Ting-Fang in Taipei contributed to this article.