SHANGHAI -- Pan Jianwei, dubbed the father of quantum physics in China, was probably pleased to discover this month that the mind-bending laws of his field were reduced by Chinese investors to a simple equation: It will go up.

When QuantumCTek, the technology company that Pan co-founded and where he holds a stake of 8.26%, made its debut on the Shanghai STAR market on July 9, demand was such that the shares rose more than 1,000%. "Our company's website crashed," an employee said. By the end of that record-breaking day, the value of Pan's company stake had risen from 239 million yuan ($34 million) to 2.4 billion yuan.

There was further frenzy on the same market on Thursday when Semiconductor Manufacturing (SMIC), China's largest chipset maker raised $6.6 billion in the biggest offering in China in 10 years. It also soared, more than trebling to become China's most valuable domestically listed tech stock.

The experiences of companies like QuantumCTek and SMIC reinforce the message of Chinese authorities that the STAR market -- a year-old attempt to create a domestic tech-friendly exchange to funnel capital to investment-hungry companies -- is starting to pay off.

"The STAR market has driven up Chinese investors' interest in highly risky tech startups," said Bruce Pang, the head of macro and strategy research at China Renaissance Securities in Hong Kong. "As institutional investors and retail investors in China have grown more familiar with tech investment, we have seen a surge in funding toward those companies."

Besides that, the STAR market -- which China paints as its version of the U.S. Nasdaq exchange -- has bolstered a broader reform of Chinese financial markets, Pang said, calling it a "replicable success" for other mainland markets that aim to loosen regulators' control. 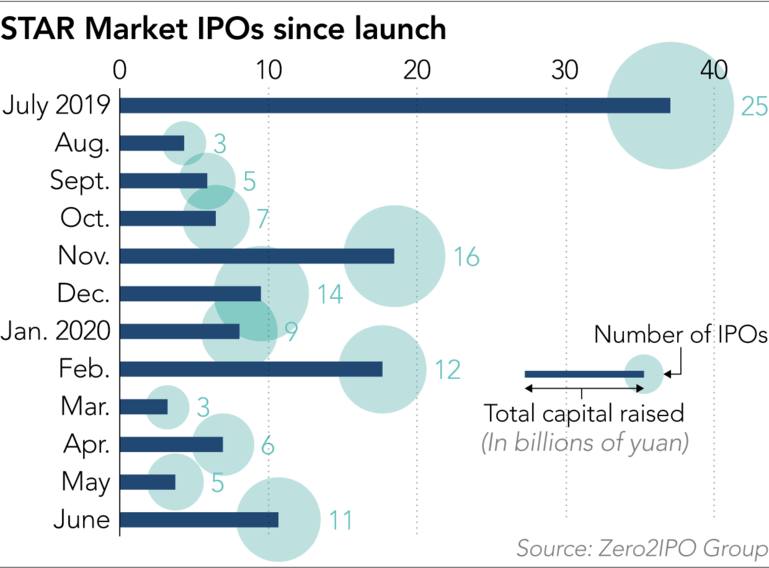 STAR, which opened on July 22 last year, is still a long way short of Nasdaq -- which lists stocks such as Apple, Amazon and Tesla, not to mention Chinese companies such as JD.com. However STAR is gaining traction. According to Refinitiv, a data provider, it is second behind Nasdaq in terms of the value of IPOs and secondary listings this year, attracting 17.3% of the total issuance and narrowly surpassing Hong Kong.

Numbers are not China's only yardstick to measure STAR's success. Mooted by President Xi Jinping in the middle of the trade war with the U.S. in 2018 to give local startups an alternative to listing abroad, STAR has clear political and strategic intentions, too.

STAR supports the "Made in 2025" blueprint, Beijing's ambition for self-sufficiency in strategic sectors such as semiconductors and artificial intelligence. And as Washington and Beijing drift apart, and Chinese companies listed in the U.S. come under increased regulatory scrutiny, STAR provides another venue for businesses to raise capital, one where they are much less likely to fall foul of regulators.

SMIC is a case in point. The Shanghai-based company last year withdrew its listing from the New York Stock Exchange and has made STAR its second listing after Hong Kong. Chinese regulators approved SMIC's offering in 19 days, reflecting a fast-track approach given to companies in key sectors that include software, biopharma and semiconductors.

In a statement, the Shanghai Stock Exchange told the Nikkei Asian Review that it wants to "serve in line with the national strategy to achieve breakthrough technologies and attract the listing of companies with high market recognition, allowing them access to financing and support their growth."

As of July 10, STAR had received applications from 404 companies and listed 123, the exchange said, raising a total of 138.49 billion yuan.

Regulation with a lighter touch is a key to STAR, which allows initial public offerings that would be impossible in other boards in the Shanghai and Shenzhen stock exchanges. The listing system on STAR means that IPO approvals rest with the Shanghai Stock Exchange and not a securities watchdog in Beijing.

"The regulator [in Beijing] acted like a nanny," Chen Datong, an investor at Hua Capital Management in Beijing, said of the China Securities Regulatory Commission. "It not only set the rules and supervised companies, it had absolute power to dictate the market."

The IPO process "has been shortened by at least five months," Chen said.

Eugene Qian, Chairman of UBS Securities in Shanghai, said: "Earlier there were only a few hundred IPOs a year under the traditional system where companies waited for CSRC approval. That has changed now."

Clearing the IPO backlog also helps investors in tech startups cash out. In 2018, the number of equity investments in China climbed to 10,000 deals, according to Zero2IPO. By contrast, there were only 2,657 exits. The uncertain return on investment has reduced Chinese venture firms' financial firepower, with the amount of funding raised down 25.6% in 2018 compared with a year earlier. This role as conduit is particularly helpful when the U.S.market is becoming less accessible for Chinese companies.

"The STAR market has helped the Chinese tech sector, particularly under the dual negative influences of the China-U.S. trade frictions and COVID-19," said Yang Yingfei, a partner at a joint venture between Baker Mckenzie and Fenxun Partners.

The U.S. Senate passed a bill in May that will require Chinese companies listed in the U.S. to comply with stiffer audit regulations. President Donald Trump's administration is threatening to delist those that refuse to comply.

An analyst from a European investment bank that frequently sponsors Chinese listings believes STAR could become the new home for delisted companies -- as well as any domestic tech startups reluctant to fully disclose their operations to American regulators. Representatives of the first batch of companies to join the STAR market last July. The market now has more than 120 stocks.  (Imaginechina via AP Images)   © AP

"Many artificial intelligence companies in China provide services to government-backed mass surveillance projects. Those companies would prefer to float on the STAR market as a way to avoid disclosing such information," the analyst said.

Although stock exchanges in China have improved their transparency, the analyst said they still fall short of international standards.

As the STAR market heats up, there are concerns -- as in other Chinese markets -- about prices going too far. The STAR board's trading volume has risen more than fourfold through July 13, more than the Shanghai main board's 119%. The average P/E ratio has reached 109, higher than domestic peers on Shanghai's main board and in Hong Kong.

Unlike other Chinese markets, where a company's share price at IPO is capped at 23 times earnings to prevent volatility, STAR-listed companies can determine IPO prices based on book-building roadshows. Nor is there a limit on share price movements for five days after debut, which partly explains QuantumCTek's 1,000% surge.

SSE said that as of July 10, shares of 123 companies rose an average of 338% from the IPO price, with an average daily turnover of 17 billion yuan. 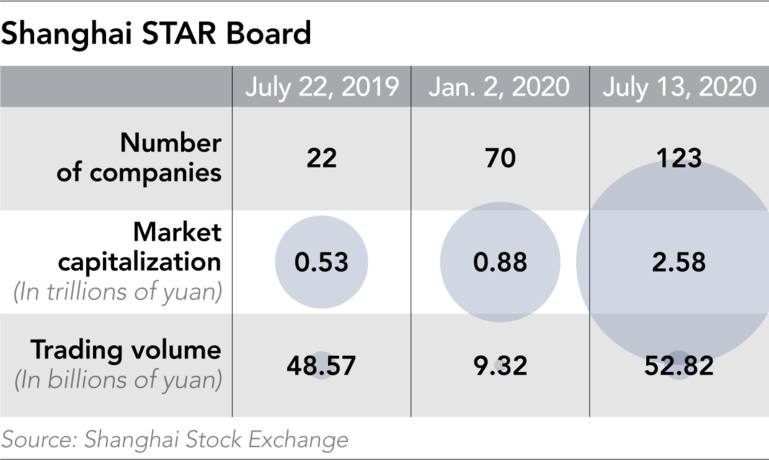 While about half of STAR-listed companies recorded annual net profit growth in 2019, one fifth logged a decline. Many were unprofitable when they floated their shares.

Some investors prefer to stay on the sidelines, citing risks accompanying tech startups and their financial backers, many of them state-owned funds.

"I wasn't excited about STAR from Day One," said Min Wanli, founder and CEO of North Summit Capital in Shenzhen.

He said science and tech startups require careful scrutiny. "Even if you have the right product, you may not have the right marketing or pricing strategy," Min said, querying the capacity of some startup founders to run companies. "Real inventors may not be good enough for entrepreneurship."

Martin Hennecke, Asian Investment Director in Hong Kong for St. James's Place, a wealth manager, said Beijing's commitment to invest $1.4 trillion over the next six years in 5G-enabled infrastructure technology would enable plenty of investment opportunities. But he said companies in the sector are also more highly priced than peers abroad.

"Hong Kong may be the likely venue for many Chinese American depositary receipts to 'return home' in the near term, given its easier access to foreign capital and broader investor base," Pang said. Companies on STAR, on the other hand, will have to navigate China's capital controls to fund any overseas expansions. 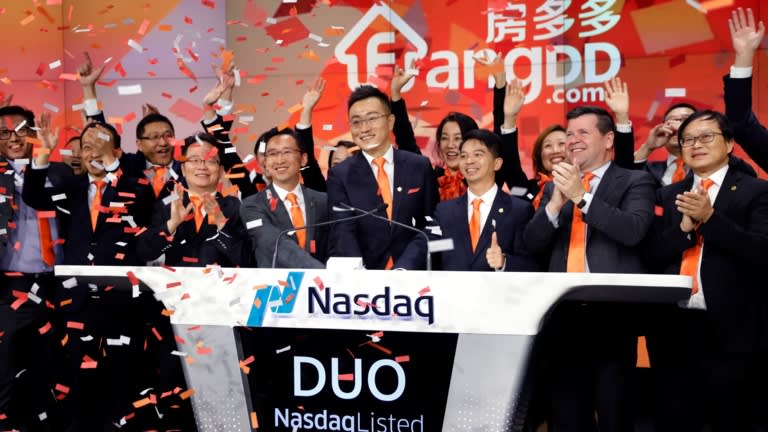 The founders of China's FangDD ring the Nasdaq opening bell in November 2019. STAR wants to make an impact as a domestic alternative to the U.S. exchange for Chinese companies to list.   © Reuters

Indeed, New York-listed Chinese e-commerce conglomerate Alibaba Group Holding last year opted for Hong Kong for its secondary listing, rather than STAR, even though the reform of Chinese financial markets was triggered by the failure to attract Alibaba and other internet companies.

Despite the prolonged friction between Washington and Beijing, the U.S. market will also "remain one of the top IPO destinations for Chinese companies," Pang said, citing its high liquidity as the big draw.

That is particularly important for Chinese internet companies that shine with their innovative business models but lack technological breakthroughs -- a core requirement for listing on the STAR market.

Still, foreign bankers are starting to take notice of STAR. "We believe Shanghai, Shenzhen and Hong Kong combined will be the biggest IPO destinations globally for several years to come and that is good news for global banks," UBS's Qian said.

Ultimately, STAR's success will depend not just on showstopping IPOs -- but longer-term performance. "The key to increasing participation in [the board as] the secondary market is the ability of these companies to grow, be profitable, and increase shareholder value," said Steven Kreit, assurance partner at financial services firm MGO in the U.S.

In other words, for investors and company leaders like QuantumCTek's Pan, the real test of STAR will not be one day's trading -- but how its companies ultimately fare when measured against global tech rivals and Beijing's own strategic ambitions.