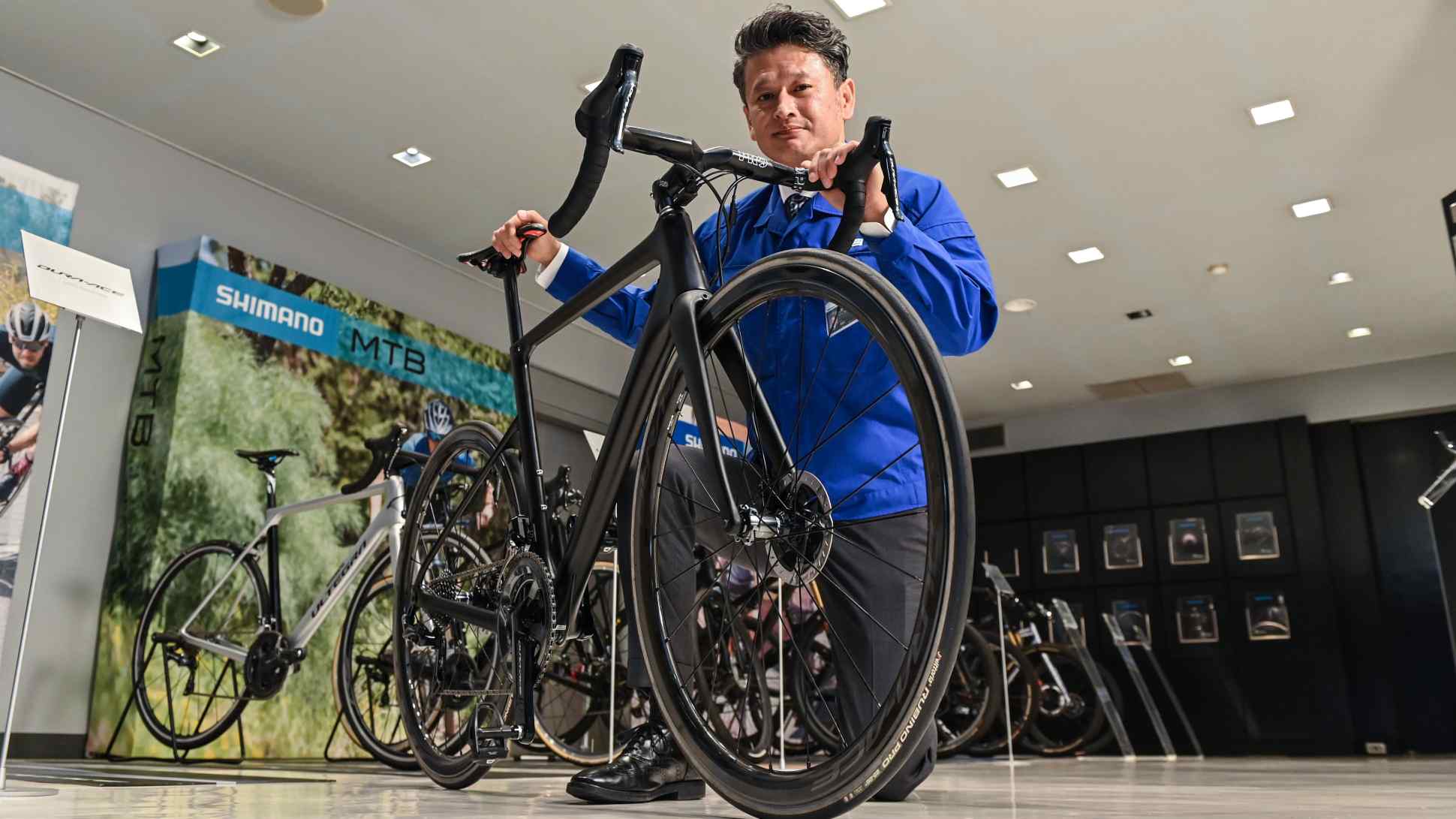 TOKYO/OSAKA -- Shimano's showroom at its headquarters in Osaka is a shrine to the technology that has made the company a household name in global cycling.

A bicycle weighing just 7 kg and kitted out with its high-specification components, can be lifted easily with one hand. Shimano staff point out items such as its Dura-Ace line, developed in 1973 for competitive road racing and again on show in this year's Tour de France, which ends this weekend in Paris.

Just as Shimano's components are designed to work as a package, the showroom is linked to the frantic activity at the company's factory a short distance away. There, hundreds of employees are working flat out, making parts to satisfy voracious global demand amid an unprecedented surge in cycling's popularity.

The scene is similar at Shimano's 15 plants around the world. "There is no factory that is not in full operation at the moment," said Taizo Shimano, the company's president.

For Taizo Shimano, whose appointment this year as the sixth member of his family to lead the company coincides with its centenary, these are rewarding but stressful times. Shimano Cycling World in Singapore: the company aims to open a new plant in the city-state in 2022. (Photo by Weixiang Lim)

Shimano's sales and profit have soared since the coronavirus pandemic began, as newcomers take to two wheels -- some looking for an easy way to exercise during lockdowns, others preferring to pedal to work rather than brave crowded public transport.

Shimano had net income of 63 billion yen ($574 million) in 2020, up 22.5% from the previous year. For fiscal 2021, the company is forecasting another jump in net income to 79 billion yen. Last year its market capitalization exceeded that of Japanese automaker Nissan. It now stands at 2.5 trillion yen. But the cycling craze presents Shimano with a challenge: keeping up with the seemingly insatiable demand for its parts.

"We deeply apologize [for the lack of supplies]. ... We are reprimanded by [bicycle makers]," said Taizo Shimano in a recent interview with Nikkei Asia. Demand "has grown explosively," he said, adding that he expects the trend to hold until at least next year.

The company is cranking out components as fast as it can. This year, Shimano says production will rise 50% compared with 2019.

It is investing 13 billion yen in domestic factories in Osaka and Yamaguchi Prefecture to increase capacity and improve efficiency. It is also expanding in Singapore, the company's first overseas production site, which it built almost five decades ago. A new 20 billion yen plant in the city-state will produce bicycle transmissions and other components. After delays to construction due to COVID-19 restrictions, the plant is scheduled to come online by the end of 2022. It was supposed to be completed in 2020. 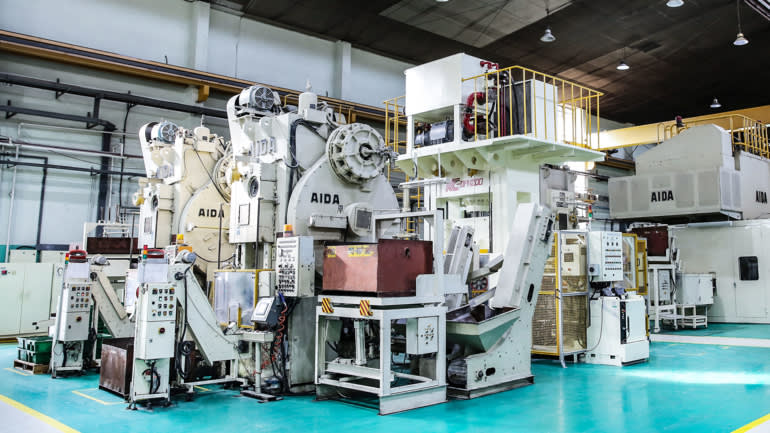 A Shimano factory in Singapore: The company has been making bicycle parts in the city-state for nearly five decades. (Photo courtesy of Shimano)

Taizo Shimano says he is unsure whether pandemic-induced demand will continue to rise after 2023. But in the medium to long term, he believes the bicycle business has legs because of growing health consciousness among Asia's middle class and rising global environmental awareness. "There are growing number of people concerned about [their] health," he said.

What also seems certain is that Shimano will not face a serious challenger anytime soon to its title as the world's top supplier of bicycle parts, though it must now demonstrate that it can capture the next booming segment of the market: e-bikes powered by lightweight batteries. 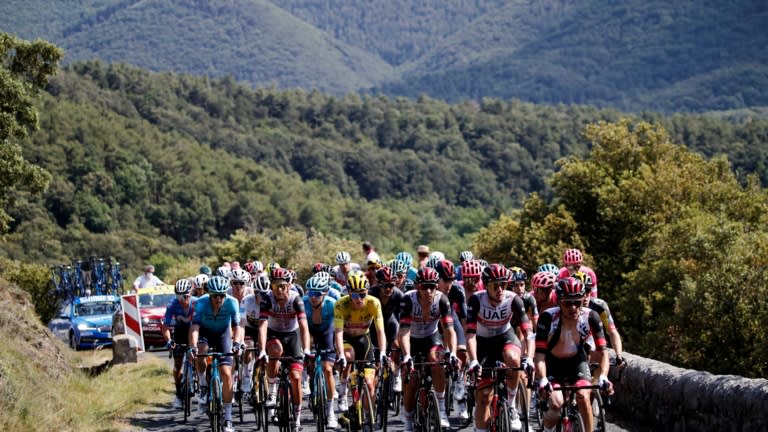 At this year's Tour de France, considered by many to be the world's premier cycling event, 17 of the 23 participating teams use Shimano parts.   © Reuters

Shimano was founded as an iron works in 1921 by Shozaburo Shimano in Sakai, a city near Osaka known as the "city of iron." A year after its foundation, Shimano began making bicycle freewheels -- a ratchet mechanism in the rear hub that makes coasting possible.

One key to the company's success is its cold-forging technology, which involves pressing and shaping metal at room temperature. It is complex, and requires high technology, but also enables precision processing.

Shimano quickly became a premier manufacturer in Japan and from the 1960s onward, under its fourth president, Yoshizo Shimano, began winning customers overseas. Yoshizo, who died last year, served as head of the company's U.S. and European operations, helping upstart the Japanese company break into a market previously dominated by European manufacturers. Europe is now Shimano's largest market, accounting for about 40% of its sales. Overall, 88% of Shimano's sales came from outside Japan last year. Shimano invented the concept of "system components," a set of bike parts such as gear shifters and brakes. This increased Shimano's global brand power, earning it the nickname "the Intel of bicycle components." Shimano now holds a global market share of about 80% for bicycle drivetrains: At this year's Tour de France, 17 of the 23 participating teams use Shimano's parts.

Under Yozo Shimano, who took over as president in 2001 and is now the company's chairman, the company expanded around the world, opening branches across Asia. The appointment of Taizo Shimano, Yoshizo's nephew and a cousin of Yozo, marks the next stage in the company's development.

As the company's recent sales and profits figures make clear, now is in some ways an ideal time for Taizo to lead Shimano. He was educated in the U.S. and worked at a bicycle shop in Germany before joining the family business.

But the company's stellar performance of late has set a high bar. Meeting rising investor expectations will be a challenge. "There is a risk factor, as bicycle demand after the pandemic is uncertain," said Satoshi Sakae, a Daiwa Securities analyst. Another analyst, who declined to be named, said Shimano "owes much of the rise in the stock price in 2020 to its former president, Yozo."

Speaking to Nikkei, Taizo Shimano set out two big areas for growth. "Asia has two enormous markets, China and India," he said. He added that the company will continue to focus on the Southeast Asian market, where cycling is starting to be seen as a leisure activity and not merely a means of transportation. A father and son check out a bicycle at Shimano Cycling World. (Photo by Weixiang Lim)

"Urbanization, rising health awareness, investments into bicycle infrastructure and changing commuting patterns after the pandemic are anticipated to lift demand for bicycles [in Asia]," said Justinas Liuima, a senior consultant at Euromonitor International. Asia contributed about 34% of Shimano's total revenue in fiscal 2020.

In China, an earlier sports bike boom helped to lift Shimano's sales there, but they topped out in 2014. "Although it is far from the peak, domestic consumption is rising again," Taizo said. He predicts demand for high-end bikes will return.

In India, where Shimano set up a sales and distribution subsidiary in Bangalore in 2016, Taizo said: "It will still take some time" to expand the market, which is small but has potential. "I have often wondered if demand for bikes would grow in India, but it's hard," he said. But he added that some in India's middle class take to bikes in the early morning to avoid the heat.

Shimano's new plant in Singapore will serve not just as a hub for production for the Asian market but also as a center to train employees and develop manufacturing technology for China and Southeast Asia. 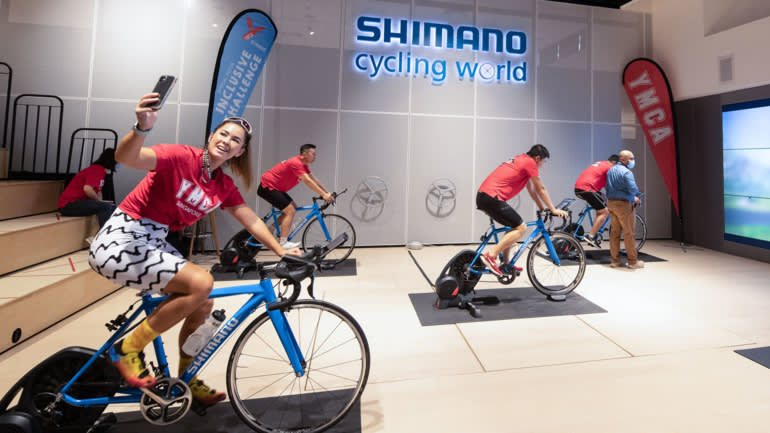 People take part in an event at Shimano Cycling World, a museum dedicated to the sport. (Photo by Weixiang Lim)

Expanding its presence in the electric bike segment is another important part of Shimano's growth plans. E-bikes generate about 10% of Shimano's revenue but the company lags behind rivals such as Bosch -- a German company best known for its auto parts -- which is strong in Europe, according to Daiwa's analyst Sakae.

E-bikes pose a challenge for a traditional bicycle component maker like Shimano because it must overcome new technical obstacles such as switching from mechanical to electronic drivetrains. The parts must also mesh well with batteries and motors.

Shimano also faces fierce competition from new players. After more than 30 years in the industry, Taizo Shimano is well aware of the difficulties. "When it comes to e-bikes, there are many players from the automobile industry," he said. "The way [the automobile industry] thinks about ideas such as scale is completely different from us."

Bosch launched its electric bicycle system in 2009 and now offers components to more than 70 bike brands worldwide. In 2017, the German manufacturer even moved in on Shimano's home turf, entering the Japanese market.

"Companies such as Bosch have experience manufacturing electric motors, have global supply chains present and can successfully compete in the electric bicycle market with the established bicycle component suppliers," said Euromonitor's consultant Liuima. Taizo Shimano speaks to Nikkei Asia at the company's headquarters in Osaka. (Photo by Takaki Kashiwabara)

"I think e-bikes will become [part of the social] infrastructure," Taizo said. The company believes electrified pedal power will become a common means of transportation amid rising global concern over the environment. It predicts that once the market gains momentum, it will spread rapidly and steadily.

Shimano is fighting for a bigger slice of this new market. Last year it rolled out the Shimano Steps EP800, an e-bike system for mountain bikes that connects with a mobile app called E-tube project that lets riders customize the settings of their bike according to their personal riding style. Shimano gets data from the app, such as how often riders use their bikes, which will help it come up with new services. Determined to catch up, the company has deployed half its development team to e-bikes.

As it enters its second century, Shimano, a company with roots in ironmaking, has its sights on a connected world as it looks to find a new gear in one of the world's most popular pastimes.