Singapore's digital banking licenses hold the potential to kick-start the transformation of a region that now excludes many people and businesses from financial services.   © Nikkei illustration
Business Spotlight

SINGAPORE -- It was the week when the "Switzerland of Asia" mixed a dash of Silicon Valley into its tropical version of Zurich.

From Microsoft CEO Satya Nadella to Google CEO Sundar Pichai, Singapore attracted top tech leaders to a weeklong "financial technology" event designed to underline that digitization is integral to the city-state's vision of its future as a banking center.

"Fintech is one key area we are growing so that Singapore can continue to develop as a global financial hub," said Heng Swee Keat, Singapore's deputy prime minister and finance minister, on Monday, the first day of the Singapore Fintech Festival.

But the most important piece of choreography came virtually, on the eve of the event, when Singapore finalized the long-expected award of digital banking licenses to four operators with most of their roots firmly in the tech sector.

In picking Sea, Ant Group and a consortium between Grab and Singapore Telecommunications as three of the license winners, Singapore is -- almost literally -- preparing to bank on some of the region's biggest tech names.

"The issuing of digital banking licenses marks a significant milestone in Singapore's banking sector," said Paul Ng, financial services lead for Southeast Asia at Accenture. "We expect the speed of innovation of the new digital banks to strengthen Singapore's position as a leading financial hub in the region." 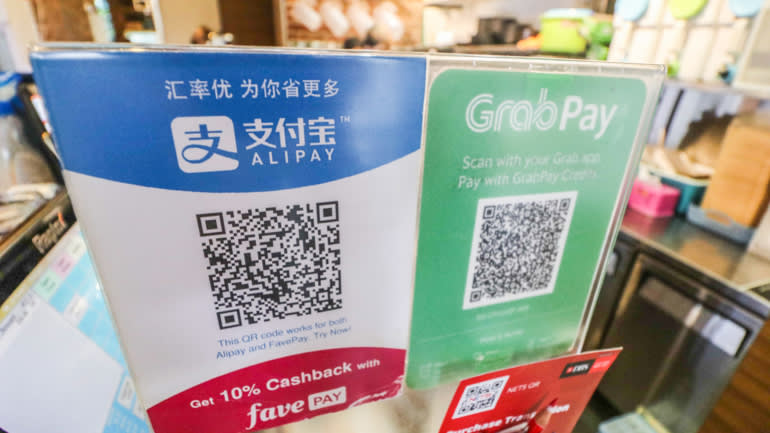 The awards show Singapore wants to stay ahead of the chasing pack as an innovative financial hub. They are also a big test of whether companies that have won over consumers in areas from gaming to ride-hailing can convert their vast customer databases and undoubted tech expertise into tools to compete head-on with long-established and powerful "regular" banks.

Furthermore, the progress made in Singapore will be scrutinized in other countries preparing to open their banking sectors to virtual lenders, such as Malaysia and the Philippines. With the COVID-19 pandemic accelerating digitization, Southeast Asia is expected to enter a new era of finance, with digital banks transforming a region that now excludes many people and businesses from financial services.

China is likely to take an intense interest in Southeast Asia's digital banks. Companies such as Ant Group have a grip on swathes of China's payment and consumer finance market, but the country's authorities are starting to flex their muscles. Last month regulators kiboshed Ant's plan for what would have been the world's biggest initial public offering by unveiling a flurry of new regulations.

Jefferies' Singapore-based analyst Krishna Guha told Nikkei Asia that Chinese companies may seek digital bank licenses in other Southeast Asian countries as well, due to "tighter home regulation and stiff competition, plus they may also want to capitalize upon regional e-commerce as well as trade, investment and wealth-related flows." He pointed out that companies like Ant already have a presence in the region in e-commerce and digital payments.

A digital bank refers to a bank that operates online only and does not have physical branches. That allows it to keep costs low and offer competitive financial services, such as higher interest rates for deposits and lower rates for loans.

Using data and technology, a bank may also be able to create more personalized products and services, with customers making transactions on their smartphones. Their vast database of consumer spending habits should help digital lenders carry out the sort of credit analysis and customer assessment that has been the preserve of traditional banks.

Back in June 2019, the Monetary Authority of Singapore, the central bank, announced the digital banking framework, saying the entry of new players would "add diversity and help strengthen Singapore's banking system in the digital economy of the future."

It was a natural move for Singapore to liberalize the banking sector, as its rival Hong Kong and some European countries had already allowed fintech startups to become digital banks -- accepting deposits rather than being payment processors. Hong Kong granted eight digital banking licenses last year, with seven of the recipients already launching services.

But Singapore has arguably gone further than many other jurisdictions in giving licenses to established regional tech names that already have huge customer bases built on non-finance consumer services -- perhaps suggesting they will be powerful disrupters of the finance industry. 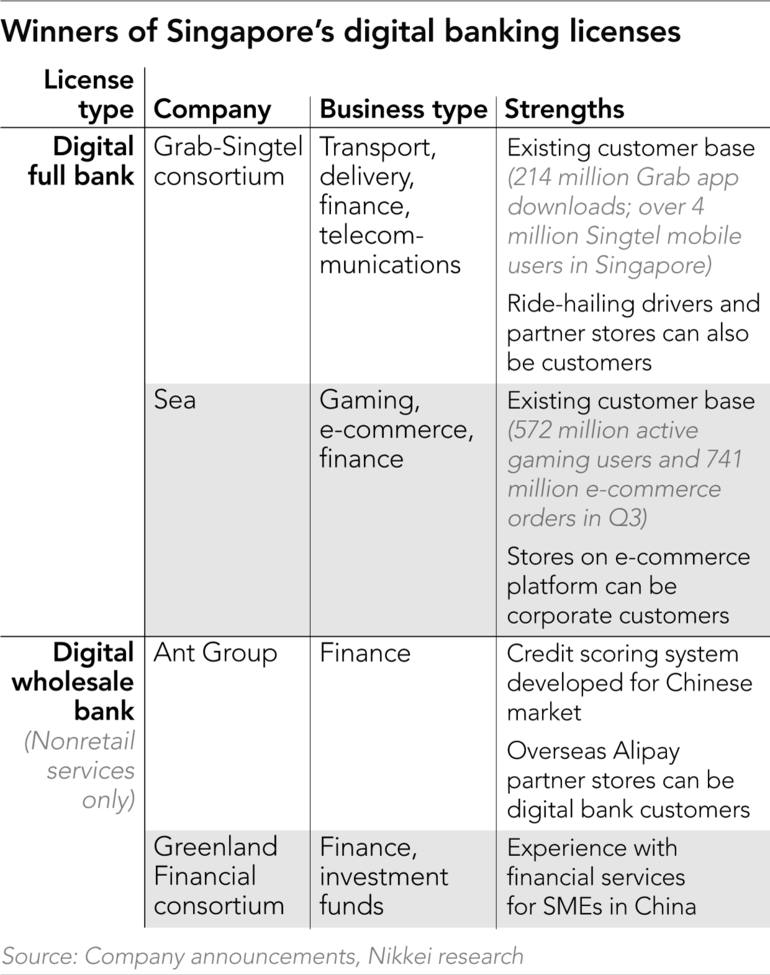 Sea, one of two winners of digital full banking licenses, started as an online gaming company in 2009, and then started an e-commerce platform known as Shopee. Sea's online gaming business had 572 million active users globally in the July-September quarter. Shopee handled 741 million orders that quarter and was the most visited shopping platform in many of the region's countries.

Grab, the other full banking license winner, was born in 2012 as a taxi booking app and expanded regionally as a ride-hailing service operator. The company later added food deliveries, mobile payments and other business lines under what it calls a "superapp" strategy. Grab's app has been downloaded 214 million times. Joint venture partner Singtel is the country's largest telecom operator, with over 4 million mobile subscribers.

These companies have plenty of data scientists and tech engineers, and have gradually expanded their financial businesses. Grab has payment services in six countries in the region and operates a smartphone-based micro-investment service in Singapore. 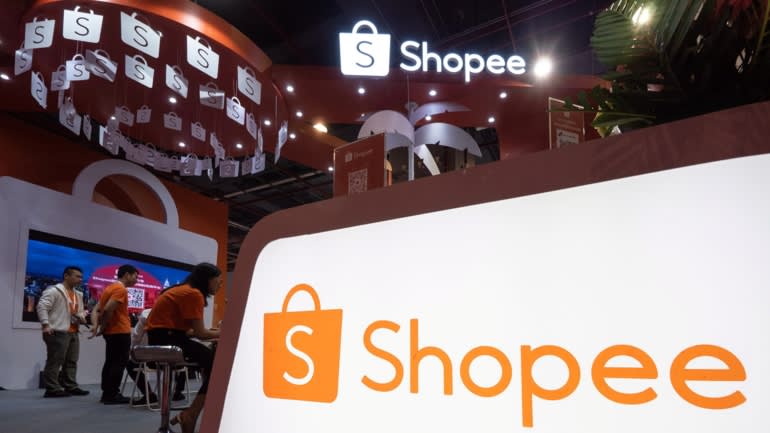 Sea, a digital full banking license winner, was founded as an online gaming company and then started the Shopee e-commerce platform.   © Reuters

Sea also has digital payment services in the same six countries, including Singapore and Indonesia.

"Both Sea and Grab-Singtel have significant existing customer bases, so for the two new digital full banks, the most important priority will be to launch products and services that differentiate their offerings from the traditional banks," Zennon Kapron, director of Singapore-based financial research company Kapronasia, told Nikkei Asia.

The prominence of these big pan-regional tech companies in the Singapore digital bank rollout suggests ambitions to replicate the success elsewhere in the region.

"There may be opportunities around the region that we are keeping an eye on," Grab's Lai told reporters.

Southeast Asia offers "a compelling market for new banking entrants," a November report by Singapore FinTech Association points out. It notes that a significant part of the region's population of 650 million is not adequately served by banks. In 2017, 68% of adults in Vietnam and 65% in the Philippines did not have a bank account. 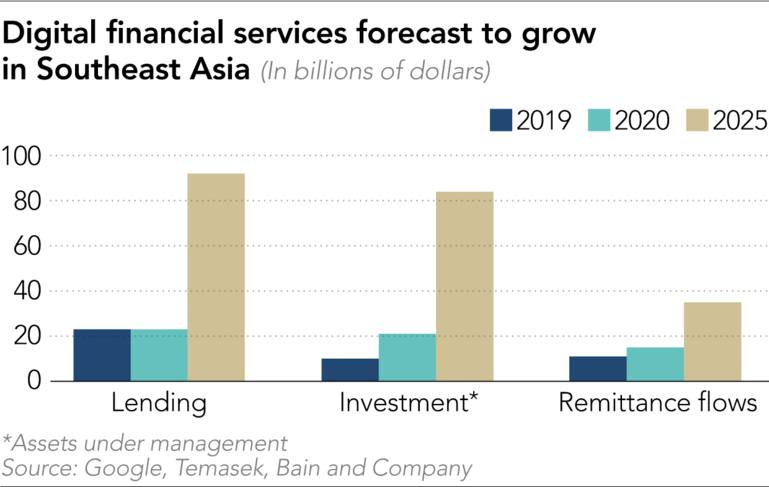 A recent digital economy report issued by Google, Temasek Holdings and Bain & Company also indicates huge growth potential for digital financial services in Southeast Asia, with online lending expected to grow four times to $92 billion in 2025 from 2020 and online investment assets to increase to $84 billion from $21 billion during the same period.

Malaysia's central bank is in the final stages of developing licensing guidelines for digital banking, with multiple impact studies to test the effectiveness. Based on a draft framework released last December, the central bank may issue up to five licenses that will allow for either conventional or Islamic banking.

Acknowledging that a transition to digital banks could disrupt financial services, the Malaysian government would allow traditional banks to form new ventures and apply for a digital bank license as part of efforts to reform their business model.

Meanwhile, the Philippine central bank last month said it would allow the establishment of online-only banks in a move aimed at further expanding digital financial services. It created a new license category for digital banks, defined as those that offer "financial products and services that are processed end-to-end through a digital platform and/or electronic channels with no physical branches."

There are about five parties that have already expressed interest in applying for a license, Chuchi Fonacier, the Philippine central bank's deputy governor for financial supervision, told Nikkei.

Lee Li Meng, head of gaming hardware maker Razer's fintech arm, which also bid for one of Singapore's full banking licenses, said the company intends to roll out digital banks where Razer has already established a strong user base and local business presence, "be it in regional countries such as Malaysia and the Philippines where digital banking application processes are expected to kick-start in the near term or other regions."

The Singapore bidding also made clear that Chinese fintech, such as Ant Group, has a strong interest in Southeast Asia. A consortium led by China's Greenland Financial Holdings Group was the fourth license winner.

Overseas expansion is a natural strategy for China's fintech players as their domestic market matures, but they face regulatory challenges in some countries like the U.S. and India, leaving Southeast Asia an attractive destination.

For Ant, which won a digital wholesale banking license, entry into Singapore's banking sector will be a fresh opportunity after last month's shelving of its huge IPO plan. On the other hand, the consortium led by Greenland Financial said on its website in Chinese that its digital bank will be "introducing China's cutting-edge fintech and experience in serving Chinese SMEs to Singapore."

Smartphone maker Xiaomi and other Chinese companies also joined the Singapore bidding. TikTok owner ByteDance was also reportedly in the race. These losers may seek licenses in other Southeast Asian markets such as Malaysia and the Philippines as well. 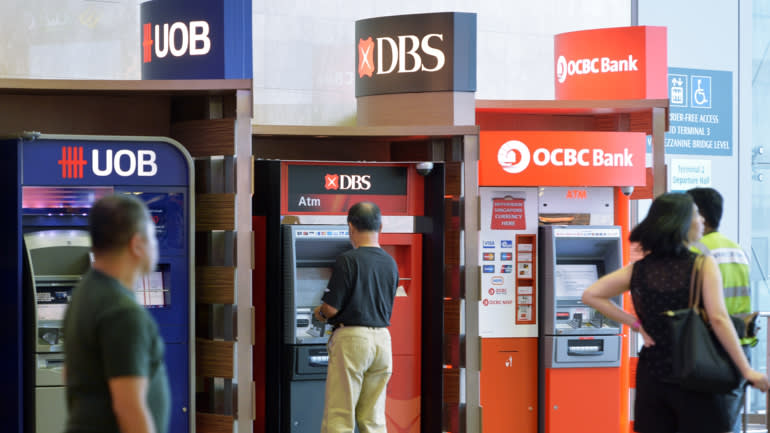 Major banks UOB, DBS and OCBC are beefing up their digital capabilities in preparation for the arrival of Singapore's new license winners.   © AP

The new breed of digital banks will not have things their own way. Regulatory approval will kick off a fierce fight for market share among both new entrants and against traditional banks.

DBS also announced Thursday a launch of a digital exchange that offers exchange services between four major cryptocurrencies and four fiat currencies, demonstrating its willingness to pursue new business in the fintech space.

Therefore achieving profitability and sustaining business as the bidders had hoped will be key challenges.

"The entry of four digital banks will naturally bring us to a transitional phase better characterized as "overbanking," according to Duan Jin Chuan, a finance professor at the National University of Singapore Business School.

"Digital banks will likely offer various incentives in order to gain market share, and to observers, some of them will act like 'to grow at all costs.' Conventional banks will naturally gear up for the anticipated fierce competition," he said. "Bank customers will benefit from the competition ... Overbanking is however non-sustainable in a longer run and will be sorted out via consolidations and/or exits in due course."