Masayoshi Son spoke this week of "unicorns" plunging into a steep valley due to the coronavirus pandemic. (Nikkei Montage/Source photo by Ken Kobayashi and screenshot from SoftBank YouTube page)
Business Spotlight

SoftBank and Son search for path out of 'Coronavirus Valley'

"If I were to describe it," Son told his unseen online audience, "unicorns that had been climbing uphill hard are suddenly faced with a coronavirus valley -- and the unicorns are falling into that valley." In case anyone missed the point, a slide depicting tumbling unicorns appeared behind Son's head.

To investors, unicorns are privately held companies worth more than $1 billion. Son and SoftBank have devoted much of their energy and cash in recent years to nurturing them. Three years ago Son set up an investment fund worth nearly $100 billion to back companies he believes will thrive in the era of artificial intelligence. The Vision Fund's firepower quickly dwarfed that of long-established venture capital funds, becoming the world's largest investor in unicorns.

But the coronavirus outbreak has offered a painful illustration that tech-heavy new companies are just as susceptible to a global crisis as their old-economy counterparts, perhaps more so given their urgent need for cash from fickle investors.

Ride-hailing pioneer Uber Technologies, now a listed company that is part of the Vision Fund stable, has seen its customer base wither as cities locked down due to the coronavirus pandemic. Office space managed by WeWork -- the U.S.-based coworking company that became a massive headache for SoftBank last year when it canceled its initial public offering -- sits empty as companies order employees to work from home. Travel has plunged as countries shut their borders, crushing occupancy at Indian hotel startup Oyo, another key SoftBank investment.

The fallout from the pandemic, along with earlier problems with parts of the Vision Fund's portfolio, forced Son to shelve ambitions for a larger, second fund, and scrambling to reassure investors that SoftBank itself is not at risk.

He is also looking to his reputation as an entrepreneur at a time when some big business names have stepped away from SoftBank, even as his grip on the company he founded -- he owns 26% -- comes under scrutiny from shareholders and creditors.

"There is a big question mark over [the company's] financial discipline and SoftBank's commitment to keeping it sound," said Hiroyuki Nishikawa, an analyst at S&P Global Ratings, which cut SoftBank's credit rating outlook from stable to negative in March.

Son has shrugged off suggestions that the company faces a serious threat. In March, after SoftBank's stock price fell to its lowest point in more than three years, Son and his lieutenants stepped in, unveiling a $41 billion (4.5 trillion yen) asset sale to pay for share buybacks and cut debt.

"After the collapse of the dot-com bubble, I was on the edge of a cliff, supporting myself with two fingers. This time, 4.5 trillion yen can be certainly monetized," he said Monday, referring to the planned asset sale. SoftBank's stock price has risen nearly 70% since the plan was announced. This week Son took the first steps toward executing the plan, preparing to pare SoftBank's stake in Alibaba Group Holding -- his most successful investment -- then following up by announcing the sale of a 5% stake in SoftBank Corp., the group's separately listed Japanese mobile communications arm.

Two decades ago, Son bet $20 million on Alibaba, Jack Ma's startup, which eventually became a $580 billion e-commerce juggernaut. Alibaba's soaring value over the years has financed Son's aggressive bets. The first block of sales in 2016, via a forward sale contract, fueled his $31 billion acquisition of U.K. chip designer Arm Holdings, the largest buyout in the country's history. SoftBank has pledged a part of its remaining Alibaba stake as collateral to take out nearly $10 billion inmargin loans.

The new deal involves another forward sale, with SoftBank raising $11.5 billion by agreeing to sell shares in Alibaba in stages through 2024. SoftBank insists that it has the option to settle the transaction in cash, suggesting Son is aware of the potential risks in selling the stake. 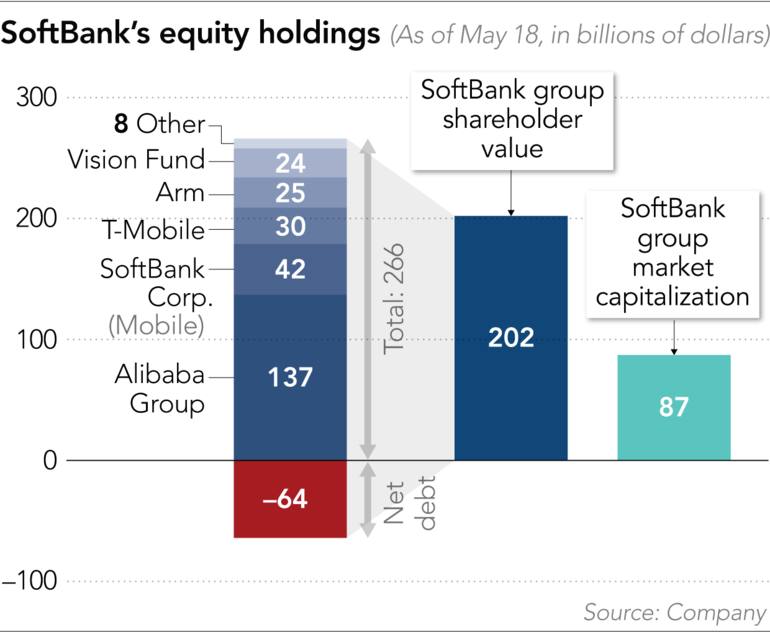 "The fact that SoftBank is being forced to dispose of its most prized assets shows that it is facing a challenging situation," said Tomoichiro Kubota, an analyst at Matsui Securities. "In the past, it would sell mature assets to invest in ventures. This time, the objective is very different: to improve its financial health."

As for the SoftBank mobile stake being sold, it is worth about $3 billion and will leave SoftBank owning around 62% of the carrier.

Analysts also expect SoftBank to announce a partial sale of its investment in U.S. carrier T-Mobile, of which SoftBank owns about 24% following a merger in April with its own carrier, Sprint.

The $41 billion asset sale plan appears small compared with SoftBank's stakes in Alibaba, T-Mobile and SoftBank mobile, which have a combined value of nearly $200 billion. Yet the move is a reminder of SoftBank's fragile position in the market.

Son has satisfied his appetite for deals with debt, pushing SoftBank Group's net debt to 11 trillion yen in total, even after offloading roughly $40 billion in debt held by Sprint. SoftBank has said its true net debt is closer to 3.5 trillion yen because debt held by its subsidiaries is "nonrecourse," meaning SoftBank is not on the hook in case of default. SoftBank also excludes about 2.9 trillion yen worth of "other adjustments," such as margin loans backed by shares, which it justifies by excluding the figure from the value of its stock holdings Some credit analysts say this assumption could be misleading because the value of shares SoftBank has pledged is much larger than the size of the loan. They also point out that some of SoftBank's cash is tied up in commitments to WeWork and the Vision Fund.

The Vision Fund, which was backed to the tune of $60 billion by Saudi Arabia and Abu Dhabi, has enabled Son to continue investing aggressively without taking on more debt. But SoftBank still has only one major source of stable cash flow, which it has used to pay the interest on its debt: profits generated by its Japanese mobile arm. Neither T-Mobile nor Alibaba pays a dividend.

As market sentiment toward leveraged companies has soured, SoftBank's tumbling shares have left Son vulnerable to banks shutting off credit, as well as shareholder opposition. The slump in the stock price, even before the coronavirus outbreak, has attracted the attention of activist investor Elliott Management, a U.S. hedge fund, which revealed in February it had amassed a stake in SoftBank and has been calling for change.

"People invest in SoftBank because they invest in Son. If you are an investor who believes that Son has the Midas touch, when somebody comes and says you should vote against Son, most will say no," said one foreign hedge fund manager. "But because of what has happened with WeWork, Son's reputation was not what it was one or two years ago. A lot of people are much more willing to question." Tadashi Yanai (left), CEO of Fast Retailing, stepped down from SoftBank Group's board last year while Alibaba founder Jack Ma (right) is soon to do the same.

The growing pressure on Son comes as some longtime collaborators are leaving. SoftBank said Jack Ma, who retired from Alibaba last year, is stepping down from the company's board after 13 years. Ma follows Fast Retailing CEO Tadashi Yanai, who departed late last year. Fellow billionaire Yanai was a close adviser to Son, and one of the few who talk him out of taking on more risk. Son has proposed that SoftBank CFO Yoshimitsu Goto and two independent directors join the board.

The coronavirus has dented the Vision Fund's performance. Its net internal rate of return for third-party investors, which include a bond-like 7% annual payout, had fallen to minus 1% as of March. While 26 investments have gained in value, 47 have been marked down. Startups' financial conditions are widely expected to worsen. An April survey by research group Startup Genome found 41% of startups have three months or less of cash to keep their businesses going.

Son acknowledged that online-to-offline businesses, including those in real estate and travel, are suffering and said 15 of the 88 Vision Fund portfolio companies may go bankrupt. But he also raised hopes that another 15 will "grow wings and fly beyond the sky" -- another image depicted on Monday -- and eventually make up most of the fund's value.

"When the dot-com bubble burst, a handful of companies like Alibaba and Yahoo generated 90% of our value," Son said. "I think the same thing will happen this time." 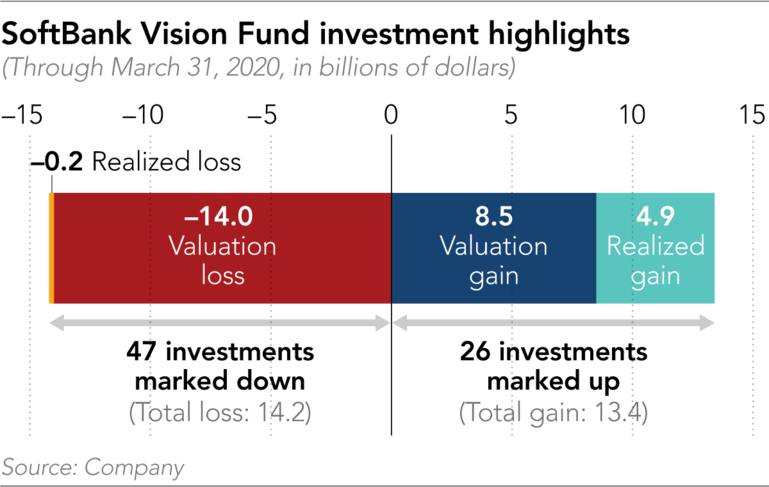 Some Vision Fund companies show signs of promise. Five of the eight portfolio companies that have been listed showed positive returns on investment by the end of March, according to SoftBank, helping offset losses by Uber and others. Four are related to health, an industry that has gained traction due to the pandemic.

Some analysts have also pinned their hopes on ByteDance, which runs a popular Chinese video-sharing platform.

But with the outlook for funding and IPOs highly uncertain, few are willing to give SoftBank the benefit of the doubt. Talks of setting up another Vision Fund have come to a halt and Son said SoftBank will continue investing cautiously from its own balance sheet.

"We are still looking to invest in top venture funds," said an executive at a major asset management company that has done due diligence on the Vision Fund. "But Vision Fund 2 largely depends on whether Saudi Arabia will participate. That is looking less likely to happen now." On Monday, Son said: "We will refrain from raising funds from the other partners we originally planned for, and continue with our own money. The fund cannot raise funds if the grades are poor."

The next important gauge of confidence in Son will come in late June, when SoftBank is scheduled to hold its annual shareholders meeting. Completing its asset sale may bring relief for investors. But whether Son can fulfill his global ambitions remains an open question.

He must also find a way to close the gap between SoftBank's own market value and the much greater value of the assets it holds: The discount that suggests investors are far less tolerant of risk than Son himself.

"There is a possibility that the discount will widen again after the buybacks end," said Kubota of Matsui Securities. "On the other hand, Son does have a track record of overcoming crises."