An artist's rendering of the SpaceX Crew Dragon: The May launch shows it is possible for a private company to send people into orbit, something deemed impractical a decade or so ago.   © SpaceX
Business Spotlight

SpaceX success has Asia startups dreaming of the stars

TOKYO/PALO ALTO, U.S. -- For 19 hours on May 31, Nobu Okada was glued to his computer screen as the SpaceX Crew Dragon lifted off from Cape Canaveral, Florida, and successfully docked with the International Space Station.

It was a history-making moment: Elon Musk's space venture had achieved the first-ever private launch of a crew into space. For Okada, and many like him in Asia's burgeoning commercial space industry, it was both an inspiration and a challenge.

"I'll go beyond that," the 47-year-old CEO said in an interview with the Nikkei Asian Review.

But while SpaceX may have marked a major milestone for the industry, whether companies such as Okada's Astroscale can follow is far from certain.

Space startups worldwide attracted $5.7 billion in investment last year, up 61% on the year and more than six times as much as in 2014, according to Bryce Space and Technology, a global space consultancy. But funding is under threat from the sudden economic downturn caused by the novel coronavirus, and few startups have found a path to commercial viability. Chinese ventures face the added hurdle of geopolitical tensions between Beijing and Washington.

"Space is notoriously hard. Many companies have tried to do what [SpaceX] achieved and couldn't take it to all the way, either in terms of R&D or commercialization," said Simon Gwozdz, founder of Equatorial Space Systems. His Singapore-based rocket startup aims to launch Southeast Asia's first commercial sounding rocket around early 2021.

"In the crucible of these times, we'll see who has better technology, a more practical approach to the market, and the pure personal resolve to survive and build a company," Gwozdz said. "Only in a time of crisis [do] you get to show how committed you are to the project." Astroscale CEO Nobu Okada says SpaceX's recent success is as a sign that his own company's services will be in demand. (Photo by Shihoko Nakaoka)

Okada likewise sees a make-or-break moment for the industry.

"A venture shouldn't become defensive in a time of crisis," he said. "They should see it as an opportunity." Astroscale acquired an Israeli startup on June 3 as it pushes into the emerging field of in-orbit satellite maintenance services. Job inquiries have poured in, giving Astroscale a chance to hire experienced talent.

Okada views SpaceX's recent success, moreover, as a sign that his company's services will be in demand. "It underscores that our mission of removing debris and keeping space safe for spaceships is going to be more important," he said.

But while there is no shortage of ambition, fundraising for the sector may prove more difficult from now on. Japanese startups alone have attracted 60 billion yen ($560 million) in capital over the last five years, but traditional sponsors such as airlines and travel companies have been hit hard by the coronavirus themselves and are not in a position to back projects with iffy returns.

Then there are the technical hurdles, which are by no means small.

Hokkaido-based Interstellar Technologies, founded by serial entrepreneur Takafumi Horie, faced its latest setback on June 14, when its attempt to launch a rocket into orbit failed. Five days later, the startup said it would plan another launch this summer.

Interstellar sent a 10-meter sounding rocket into space last May but has yet to replicate that success. In the face of repeated disappointments, Interstellar President Takahiro Inagawa says he takes inspiration from Space X, particularly its co-founder, Tom Mueller. 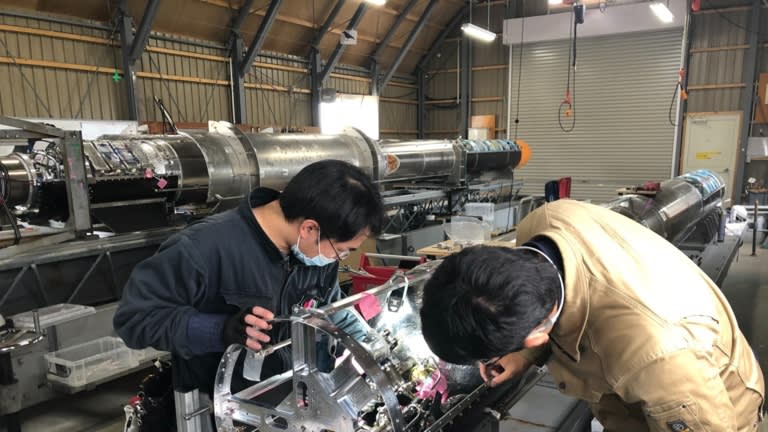 "His story of being an amateur rocketeer trying to build his own small rocket and achieving a historic crewed launch in just 20 years or so is very encouraging," Inagawa said. "This means that we can also do it if we do the same way."

Chinese startups, meanwhile, may also take inspiration from SpaceX's recent achievement, but they have had to follow a different path.

One reason is political: For most space startups, the main source of revenue is contracts for rocket launches. Since 1999, however, the U.S. has banned any satellites that contain U.S.-made components from being launched by China, after Washington accused Beijing of stealing U.S. missile and space technology.

Given the preeminence of American technology in the satellite industry, "Chinese space companies, private or state-run, have been basically denied access to the international market since then," said Li Chao, a senior space analyst at a Shanghai-based consulting company.

"They might be able to get some contracts from some Third World countries who are not American allies, but other than that, not many would want to risk angering the U.S. to have their satellites being launched by a Chinese company," he added. "China is having some kind of an image problem," Hines said. "Some characteristics that are distinct to China's political and economic system have made it more difficult for its commercial space sector to compete."

China's domestic space market, meanwhile, is dominated by state-run enterprises, such as China Long March Rocket, leaving newcomers in the private sector struggling for revenue. This, according to Li, is the bigger problem. "China's space industry has been striving for survival in the crevice from the very beginning," Li said." The exclusion from the Western world is not new. The real challenge for them is to find a profit model."

Then there is the issue of government support.

Under the Obama administration, NASA, the U.S. space agency, decided to hand over low-earth orbit transportation to private industry in order to focus on more ambitious missions, such as sending people to Mars.

"NASA's decision to reposition itself and start regularly contracting private companies for low-earth orbit projects is the main driver for the industry to flourish in the U.S.," Li said. SpaceX alone has received billions of dollars in support and contracts from NASA, including more than $3.1 billion to fund the development of the recently launched Crew Dragon capsule. It has also secured several contracts with the agency over the past two decades, including a $1.6 billion commercial resupply services agreement in 2008 for at least 12 missions.

More recently, three companies -- SpaceX, Alabama-based Dynetics, and Blue Origin, the Washington State-based space startup owned by Amazon's Jeff Bezos -- were collectively awarded a NASA project worth almost $1 billion on April 30. Their job is to help land a man and the first woman on the surface of the moon by 2024.

"I think there's a tendency for the public to equate commercial with [the] private sector," said Hines at Cornell. "There are a lot of private space companies in the U.S. selling their products to state-run entities. They can still be private companies [even] if not 100% contracts are commercial," he added.

China, by contrast, has focused on state-run space exploration. Its latest milestone came on June 23, when it successfully launched into orbit the final satellite for its BeiDou-3 navigation system. The completed BeiDou-3 network can now provide worldwide navigation coverage, meaning China is no longer reliant on the U.S.-owned GPS.

It took China more than 20 years to complete the project, which reportedly cost the country more than $10 billion.

"BeiDou is the perfect example of what China's space industry has been like over the past decades: state-led, with world-leading technologies, but not evolving as quickly or spending as efficiently as it should be," said Wayne Shiong, partner at venture capital firm China Growth Fund, which is a backer of Chinese rocket startup LandSpace.

The country also overtook the U.S. in terms of launches back in 2011, last year putting 32 rockets into orbit, compared with 21 for the U.S., according to Bryce Space and Technology and the Center for Strategic and International Studies.

Despite its emergence as a space power, however, Beijing has provided scant support for its commercial space industry. The State Council, China's chief administrative authority, gave private enterprise the green light to venture into space in 2014 and highlighted the need for government support for the sector in a 2016 white paper. But so far, no private space company in China has been awarded an independent launch contract.

"Until the Chinese government can hand out contracts to private space companies like NASA does, all the announced government support policies are just talk," Li said.

China nevertheless has over 120 private space companies. In the rocket launch segment alone, more than 23 startups have been founded since 2014, according to iResearch Consulting Group, a market research company. 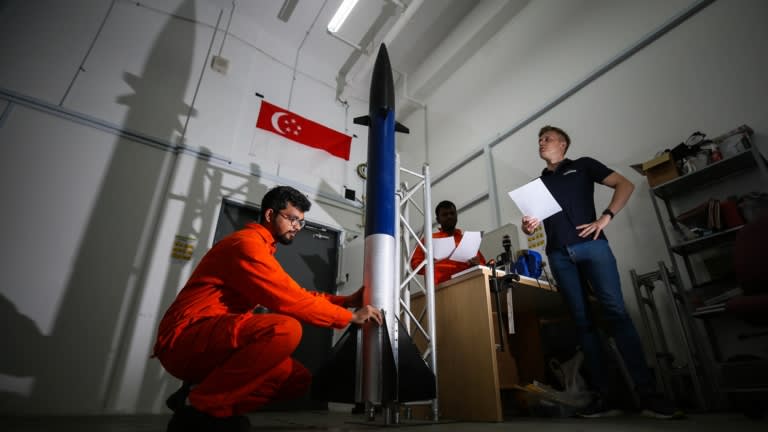 The frontrunners in rocket launches include i-Space, LandSpace, One Space, LinkSpace and Galactic Energy, all founded after 2015. In just a few short years, they have attracted billions in funding from venture and strategic investors.

Among them, i-Space became the first Chinese private space company to successfully launch a rocket into orbit in 2019. LinkSpace successfully test-launched a reusable rocket, which landed in Mangai, Qinghai Province, after reaching an altitude of 300 meters.

"SpaceX makes China realize we are lagging behind in terms of rocket launches," said Shiong at China Growth Fund.

While China led the world with 34 orbital launch attempts, including two failures, in 2019, SpaceX alone accounted for 13 of the 21 U.S.-based launches last year and successfully launched 21 times in 2018.

"This one company has come close to launch[ing] as many rockets as an entire country, which is alarming to China," said Shiong.

"China is not lacking capital to invest in the space sector, there is plenty of money out there ready to pour into the sector. ... But for a lot of investors, space startups need to prove their worth first," said Shiong.

"I think where those Chinese companies are at right now is where SpaceX was around 2010. They still need a good five to seven years to catch up. ... But one advantage they have is they know what mistakes not to make after SpaceX made them," he added.

But if there is another lesson that can be gleaned from the American company, it is the importance of sticking to a mission no matter how difficult. "It's important to know [that] what was not possible yesterday might be very much a reality tomorrow," said Gwozdz, the Singaporean entrepreneur. "It's up to us to make the difference today."